Jerry, of The Reel Outdoors, reports that surf anglers are finding better numbers of sea mullet moving into the area with water temperatures on the rise. Fishing bait shrimp or sand fleas on bottom rigs has been producing most of the action.

Sound-side anglers are catching red drum in marshes and creeks around the inlets. Both soft plastics and bottom rigged baits are getting strikes.

A few speckled trout are starting to show up. The mainland creeks are producing most of this early action, with water temperatures higher there than surrounding waters.

Over the next month, anglers anticipate seeing bluefish and possibly spanish mackerel schools pushing into the region. 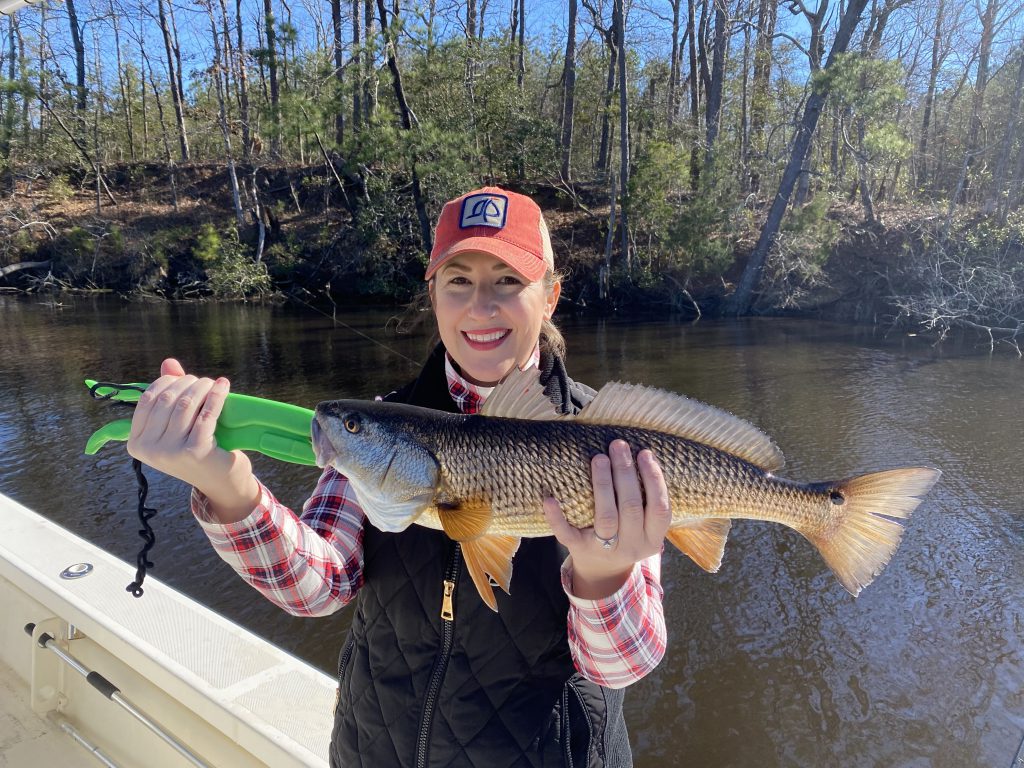 Carrie Price, from Raleigh, with a slot redfish caught in a creek off the White Oak River on fresh cut shrimp. She was fishing with Capt. Rob Koraly of Sandbar Safari Charters.

Benjamin, of Dudley’s Marina, reports that with warming water temperatures, anglers are seeing the speckled trout action start to fire off in area creeks.

Red drum are still schooled up back in the marshes, and Gulp soft plastics have been the best baits for getting these schools to bite.

Sea mullet are pushing into the area, with anglers now finding fish off the piers and in the surf.

Nearshore anglers are seeing bonito and false albacore arriving in the area, though these first groups are fairly scattered off the beach. Over the next few weeks, larger numbers of these bonito and albacore arrive and make for easier work of spotting the surface-feeding schools.

Going toward the end of April, the speckled trout bite only tends to get better. Z-Man and Gulp baits both consistently produce in these creeks, but warming temperatures bring a great opportunity to throw topwater plugs. Heddon Spook Jrs., MirrOlure Top Dogs, and Rapala Skitterwalks are three of the top producing baits each year.

Johnathan, of On Point Charters, reports that red drum are schooled up on the shallow inshore flats. Their feeding habits have been fairly sporadic, with some days being fired up and others having lockjaw. Gulp soft plastics on lighter (1/8 oz.) Fathom jig heads have been a great search bait, with Carolina-rigged live minnows also producing action.

Speckled trout are feeding in deeper holes of the mainland side creeks. A wide variety of MirrOlure options and soft plastics are getting strikes.

Sea mullet have pushed into the boat basin over in Morehead City. Fresh shrimp on bottom rigs has been the best setup for targeting them.

Along the beaches, anglers look forward to bonito showing up. Some bluefish should be found right beside them, with both species just holding off until water temperatures rise a little more.

Dale, of Fish or Die Charters, reports that red drum are still gathered in their large schools which makes for great sight-cast fishing. Z-Man or Gulp 4” white shrimp on lightweight (1/16-1/8 oz.)  jig heads are working great in getting action without spooking fish. The 808 MR MirrOlures in “broken glass” color patterns also work well in these situations.

Speckled trout are feeding in channels and creeks, with MirrOlures getting anglers in on the action.

Black drum are staged up around the deeper docks (in 10-12’) and feeding on fresh bait shrimp.

Sea mullet have begun to push into deeper holes along the waterway. Bottom rigged fresh shrimp and clam strip flavored fish bites have been working great.

John, of Early Riser Fishing Charters, reports that nearshore anglers look forward to the bonito showing up anytime in April. This is usually one of the first signs of spring fishing starting up off the beaches.

Offshore anglers have been waiting on breaks in the weather more than anything as of late. Wahoo and tuna are both out at the break feeding when anglers do find a weather window to make the run.

Inshore anglers are finding the speckled trout now moving out of creeks and attacking topwater plugs. On the cooler days, it has been best to stick with the sub-surface lures.

Red drum are still holding in large schools throughout the marsh. Over the next few weeks, they begin to break up into smaller groups and fan out in the area. Both topwater plugs and Gulp baits are producing strikes when finding a school. 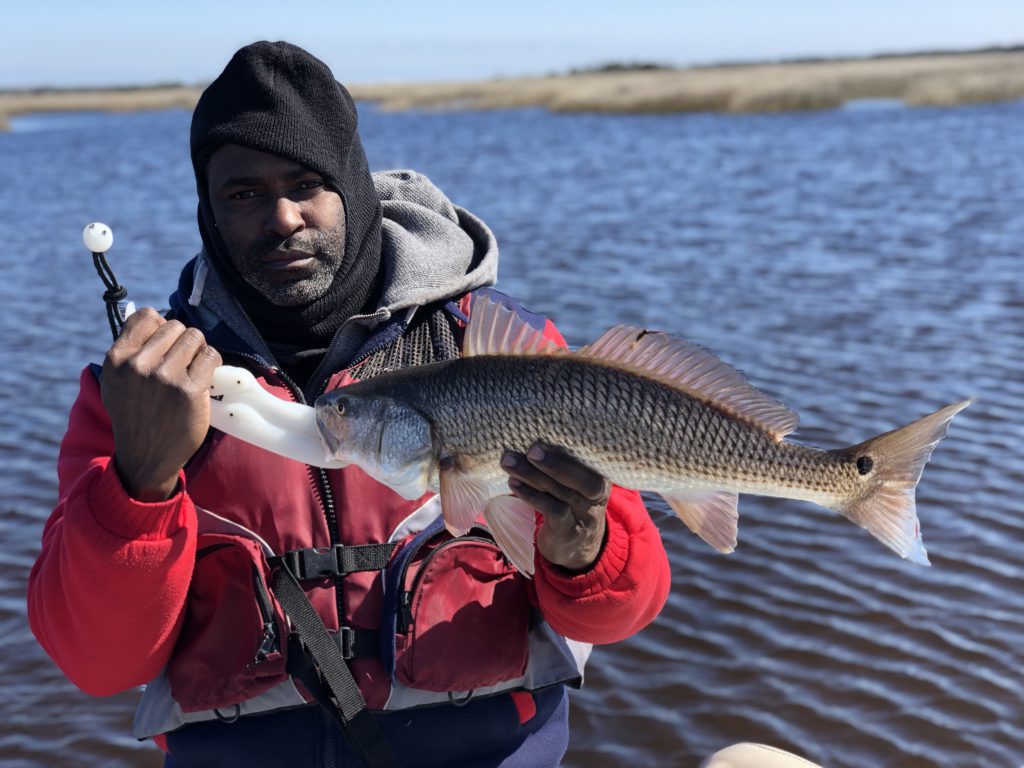 Shaun, from Durham, with a red drum caught on a Fathom root beer rattail soft plastic. He was fishing the marsh behind Bear Island with Capt. Matt Littleton of Friendly City Fishing Charters.

Josh, of Liquid Fire Sportfishing, reports that wahoo action has been picking up south of the area, with many fish holding over the offshore scallop-covered bottoms.

Blackfin and yellowfin tuna are mixed in in the cleaner, warmer Gulf Stream waters.

King mackerel are being caught on Blue Water Candy Wedgies rigged with cigar minnows in the 150’ depth range out of Bogue Inlet as they begin to push nearshore. Anglers working over bottom structure to the east are finding the kings as shallow as 90’.

Bottom fishing has been producing triggerfish in the 130-150’ depth range. Anglers looking to target structure closer to the beach are having success with Gulp baits rigged on bucktail jigs in the 55’+ range.

Teresa, of Bogue Inlet Pier, reports that with water temperatures around the pier hitting 59 degrees, it shouldn’t be long before major changes start happening.

Sea mullet (up to 1.5 lbs.) are around in rather good numbers for anglers bottom fishing with shrimp.

Blowfish (up to 1+ lbs.) are also showing up and hitting the same bottom-rigged offerings.

Over the next few weeks, anglers should see bluefish start to arrive in the counts. During certain times, it is possible that scattered schools of false albacore will come within casting distance.

Spanish mackerel also could be arriving around the end of April.