Jerry, of The Reel Outdoors, reports that anglers fishing the creeks throughout the sound are catching good numbers of speckled trout. These schools are moving into deeper holes towards the backs of these creeks where they will holdover for the winter.

Red drum have started gathering into large schools, as they typically do in the winter. These schools will travel around the shallow bays behind Bear Island searching for food and warmer waters.

Surf fishing has been fair, with anglers finding some bites while fishing bottom-rigged baits.

Off the beach, anglers have started to see the first bluefin of the winter showing up. These giants have made a showing along the Crystal Coast over the past few years, and they give properly equipped anglers an opportunity to catch a lifetime fish within sight of land. 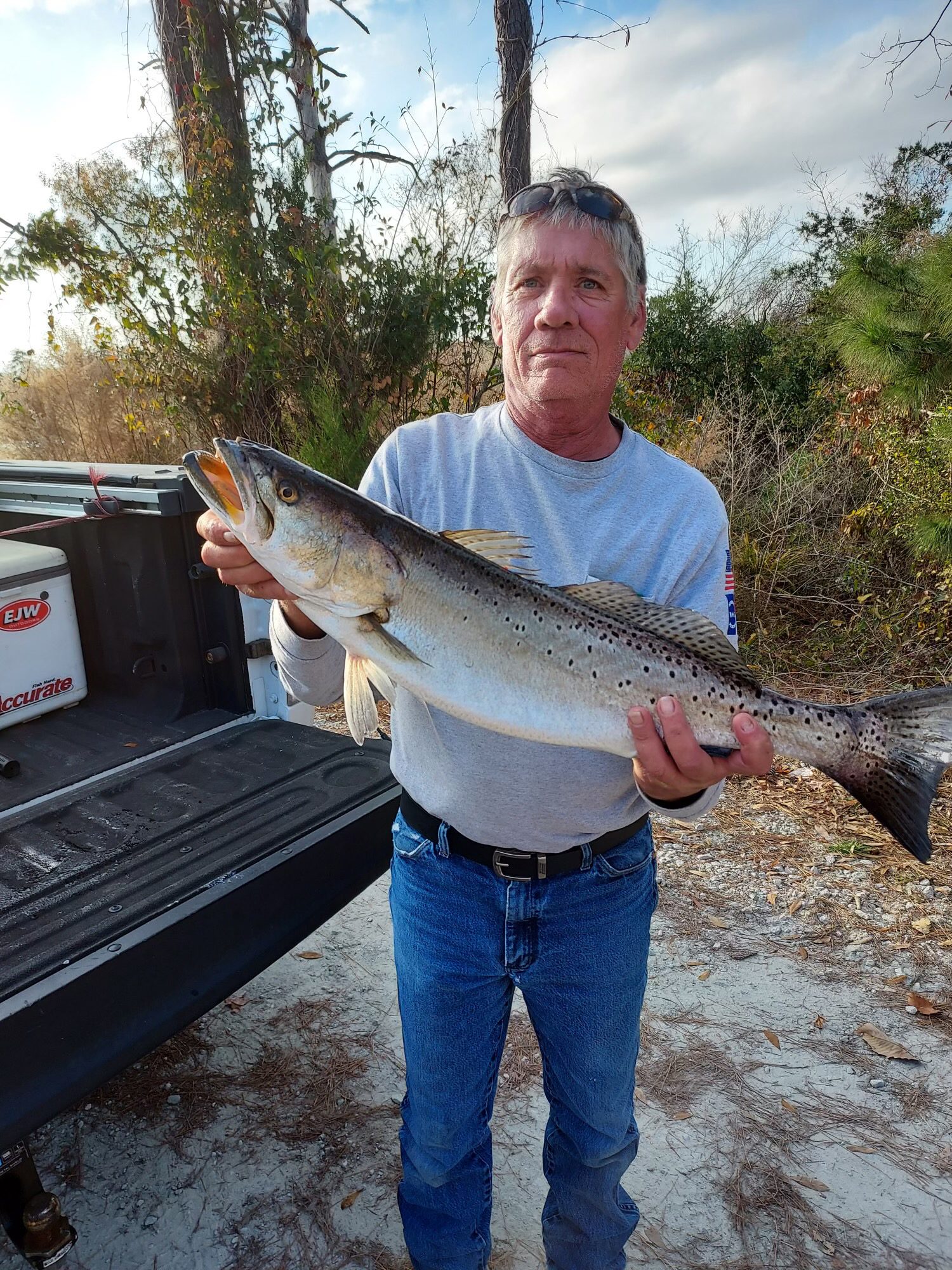 Rob, of Sandbar Safari Charters, reports that speckled trout are moving into their winter patterns. These schools will be staged way up in the inland creeks and rivers. Slow presentations are key this time of year. Soft plastics with light jig heads, suspending artificial shrimp, and MirrOlures are all good choices. Live mud minnows can also be deadly, especially in the colder months when suspended under a cork.

Small red and black drum will be hanging near docks, stumps, and similar shoreline structures. Fresh frozen shrimp fished on bottom rigs should entice some strikes.

Larger red drum will be schooling up on the flats, as long as winter temperatures stay mild. Anglers will have success while sight-casting small Gulp baits, live minnows, and cut mullet. Also look for schools to be pushed into the surf right off the beaches of the barrier islands. This is a great option for anglers finding a weather opening with light north winds to run out and sight-cast at schools spotted in the backs of waves rolling up the beach.

Some sheepshead, gray trout, and black drum will push out onto the nearshore reefs and wrecks through the winter. Shrimp fished on jigs or bottom rigs is a good way to hook up.

Dale, of Fish or Die Charters, reports that speckled trout fishing has been decent in area creeks and up into the White Oak River. Most of the action has been with various soft plastics, Halo Shads, and Billy Bay Shrimp.

Red drum are being caught back in the marshes. The cooler inshore water temperatures have these reds gathering up in the large schools that make up their winter pattern. When locating these schools on the flats, anglers will find success with 4” Gulp shrimp on lightweight 1/8 oz. jig heads.

Some schools will also push out along the beachfronts in these cooler months. Carolina-rigged cut mullet works well when targeting the oceanside fish.

Going into winter, look for speckled trout to provide a majority of the action. Deeper holes and mud flats in the backs of creeks will be where to target the trout.

Red drum will also stick around in their large schools through the winter. They will move about in shallow bays in the marsh, as long as water temperatures don’t get extremely cold.

John, of Early Riser Fishing Charters, reports that speckled trout fishing has been awesome, and this bodes true for the New River area especially, as there’s been a lack of rain that has allowed salinities to stay up. This has opened a great opportunity for trout to make an early transition into creeks. This year this has happened about a month before it typically does, and it makes for the perfect time to catch large trout, as they are schooled up and actively feeding in a smaller area. Just about any color pattern of MirrOlure (especially the 27 series) are getting quite a few citation-class fish to the boat.

The trout fishing should remain strong throughout the winter unless a big freeze comes through. Typically, the winter will see flashes of warm spells where the bite will really turn on for that period. During colder periods, it is productive to use soft plastic baits and work them very slowly.

The red drum are forming into large schools back in the marshes. They also will hang and feed in these areas until too much fishing pressure or bad winter weather pushes them out. The red drum react well to scented baits.

Off the beach, king mackerel fishing has been good when the weather has opened a window to make a run at them. Plenty of large (to 50+ lb.) kings are around for anglers fishing live or dead baits over structure with some warmer water. The east side of Cape Lookout will present conditions that these kings favor for most of the winter.

Bluefin tuna have already begun to show up, and they should hold off the Morehead City area for most of the winter. 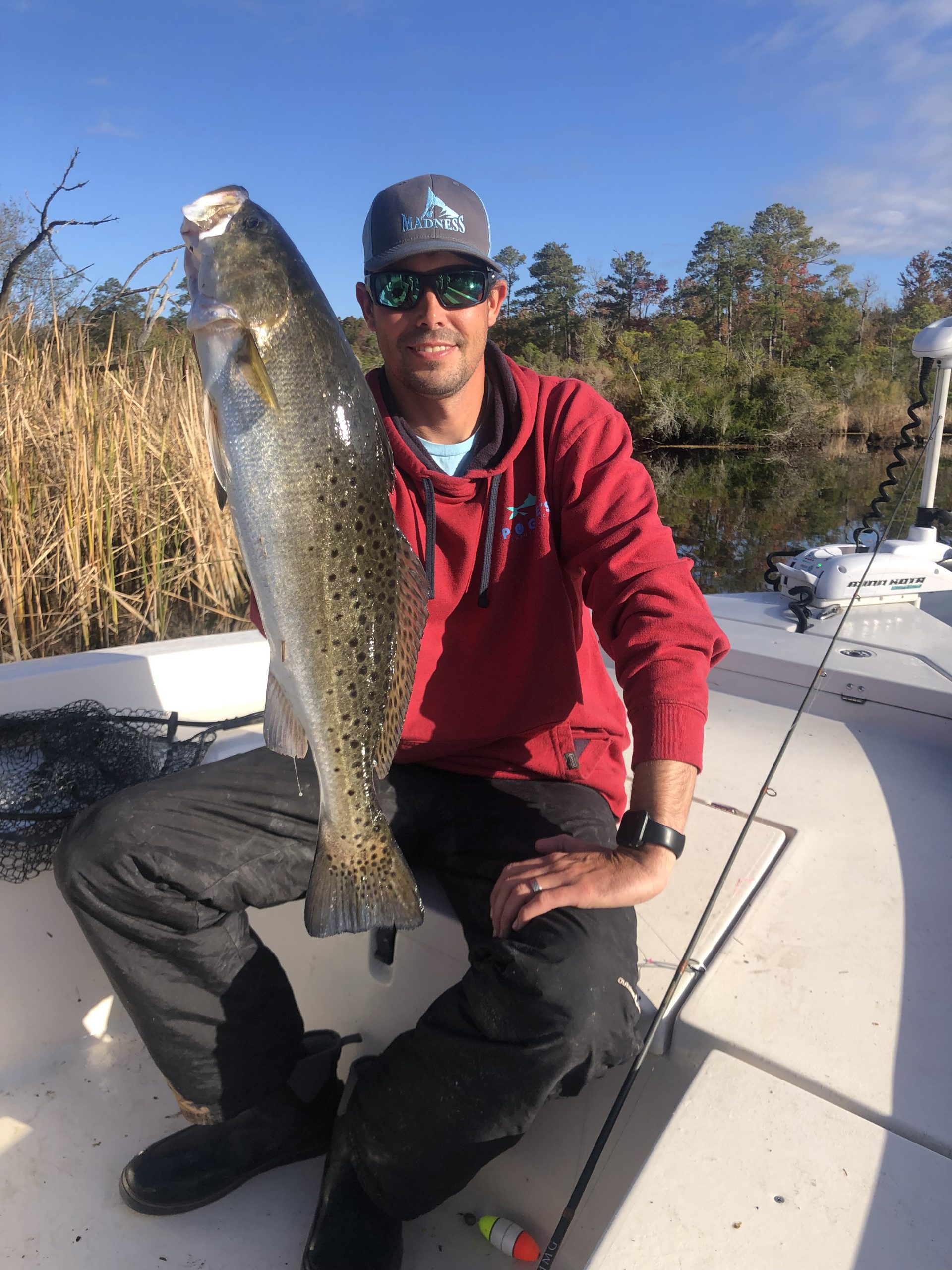 Jerry Burns, of Swansboro, with a 25″ speckled trout that was caught on live shrimp in the New River. He was fishing with Capt. Matt Littleton of Friendly City Fishing Charters.

Mark, of Liquid Fire Sportfishing, reports that the frantic action from king mackerel and blackfin tuna continues to be the allure for nearshore live bait anglers. Schools of various species of baitfish are holding in depths of 45-100’, attracting these pelagic species to feed and pack in needed nourishment for the upcoming winter months. Start trips by spotting and netting menhaden along the shoreline in 25’or less.

Kings exceeding 50 lbs. have been commonplace when using live menhaden. If live bait is difficult to catch, using dead cigar minnows and ballyhoo on the same live bait rigs has been successful.

Large blackfin tuna (to 30+ lbs.) have been sprinkled in with the king mackerel bite.

Mike, of Bogue Inlet Pier, reports that bottom fishing has remained strong right up to the end of the pier’s last open weekend of the season. Anglers taking advantage of the good weather found mixed bags of sea mullet, spot, black drum, bluefish, and blow toads. These species will all stick around through the turn of the new year.

Anglers with season passes and those fishing the area’s surf zone will find bottom rigs with the freshest baits possible to be the most productive.