Randy, of The Reel Outdoors, reports that surf anglers are seeing a great variety of species with summer fishing now in full swing.

Bottom rigs are producing sea mullet, pompano, and black drum, and some red drum are mixed in, with most everything feeding on fresh cut mullet.

Bluefish and spanish mackerel are being caught on casting jigs from the sand.

Sound-side anglers are hooking red drum back in the marshes, and large sea mullet are being found in the deeper holes around the Cedar Point and Swansboro areas.

Benjamin, of Dudley’s Marina, reports that the red drum bite has been very consistent, as the fish are now fired up by all the bait inshore. These smaller schools are scattered from the ICW up into the river mouths. Artificial shrimp have been crushing the reds this year. Anything from Vudu, Savage, Gulp, and D.O.A. have been producing, as long as it’s a shrimp pattern. When the conditions are right in the early and late hours of the day, topwater plugs are also getting strikes.

There are some summertime speckled trout mixed in these same areas.

Sheepshead are being caught around oyster rocks and bridge or dock pilings with fiddler crabs.

A few good-sized flounder are being hooked in the ICW. 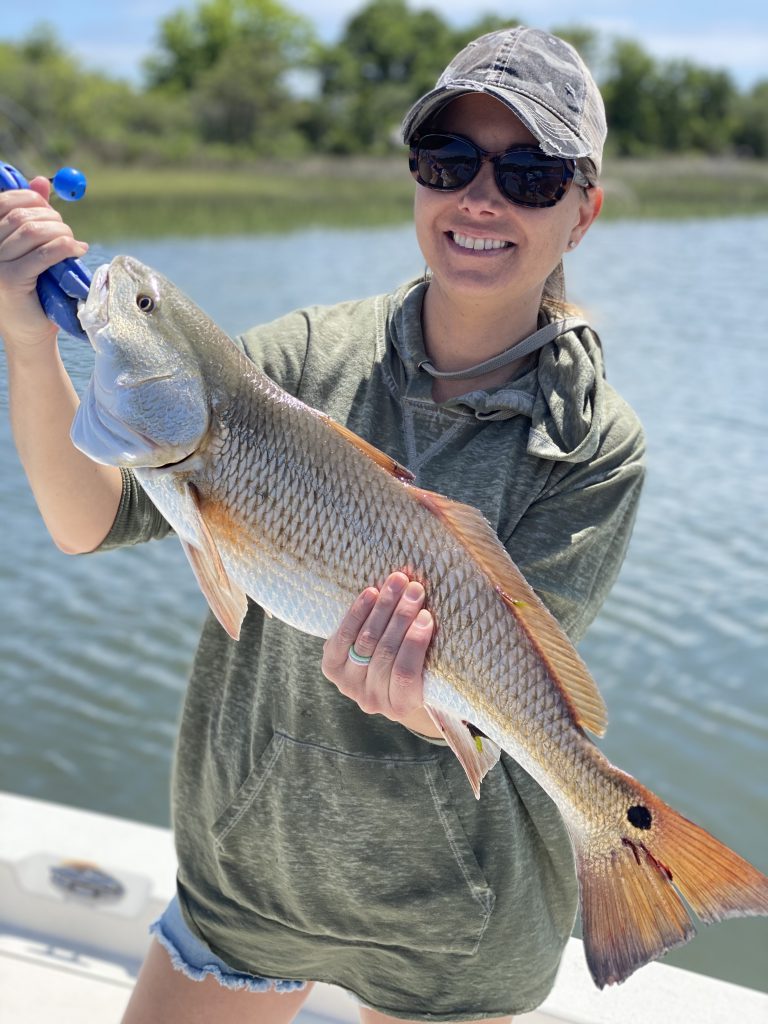 Rob, of Sandbar Safari Charters, reports that nearshore fishing has been hot for large spanish mackerel and 10-30 lb. king mackerel. Live menhaden and threadfins fished around the nearshore wrecks have been the ticket to getting strikes.

A few scattered cobia are mixed in over this structure as well.

Bluefish, spanish mackerel, and gray and speckled trout are moving around the deeper channels near the inlets. Both spec rigs and soft plastics are getting most of the bites.

Redfish and black drum are pushed up onto inshore flats around oyster bars. Bait fishing with shrimp or mullet has been most successful with the warm water temperatures. Topwater plugs are getting strikes from the red drum for anglers on the water early.

Johnathan, of On Point Charters, reports that red drum action has been good for anglers working in the marshes. These schools are pushed up onto the shallow flats where Gulp shrimp rigged on lighter (1/8 oz.) jig heads have been successful. Topwater plugs such as Rapala Skitterwalks and finger mullet fished on Carolina rigs also have been productive.

Black drum and sheepshead are feeding around the local bridges. Fiddler crabs on Carolina rigs are the top producing setup.

Off the beach, there has been a good number of large spanish mackerel and kings on the nearshore reefs within 10 miles. Slow trolling large live menhaden on king mackerel rigs are getting strikes.

Schools of false albacore and a smaller class of spanish mackerel are feeding just outside the inlets. Casting at the schools with a variety of small, flashy jigs (such as Big Nic Spanish Candies) are getting the fish hooked up.

Dale, of Fish or Die Charters, reports that sheepshead and black drum action has been great, with most fish now pushed in around inshore structure. Target the bridges and docks around Swansboro with fiddler crabs and fresh shrimp for the drum.

Flounder are being caught by anglers fishing soft plastics or spinnerbaits along the bottom and on the inshore ledges.

Red drum fishing has been good, with the fish broken up and pushed onto the flats in search of an easy meal. Target them with Rapala Skitterwalk topwater plugs.

King mackerel are pushed shallow and are hitting live or dead cigar minnows on kings rigs and Yo-Zuri deep diving plugs. Target areas from the beachfronts out to 40’+.

John, of Early Riser Fishing Charters, reports that schoolie-sized king mackerel (up to 10 lbs.) have moved in thick over structure in the 5-10 mile range.

Scattered cobia are holding in this same range and striking the same bait and lure offerings.

Further out, dolphin fishing has been steadily picking up and should only improve over the next few weeks. The overall dolphin numbers have been high, though anglers are seeing smaller fish than the first wave that came through last month.

Some wahoo are around with the billfish, and they’re both showing up in the spreads. Most of the action has been in the deeper 100 fathom area.

Inshore anglers are finding a great class of mid- to upper-slot red drum. Live and cut baits have been most productive, but topwater lures are a great option in the early mornings.

When fishing up around the river, there are some nice-sized speckled trout mixed in. 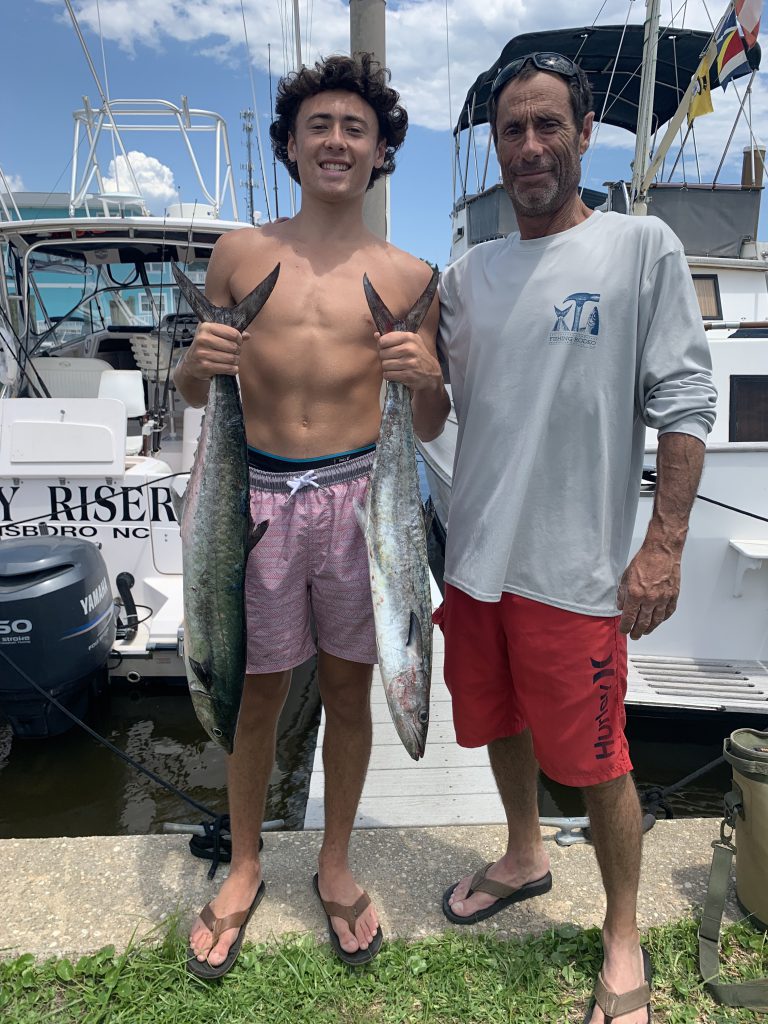 Matt (left) and Mike Travaglia, from Wilmington, with a couple of the kings they caught while slow trolling live bait about 10 miles out of Bogue Inlet. They were fishing with Capt. John Parks of Early Riser Charters.

Mark, of Liquid Fire Sportfishing, reports that the nearshore and offshore bite for various species is heating up off the Crystal Coast with summertime fishing arrived.

Anglers have loved the light-line action with a fun class of 8-15 lb. kings and citation spanish mackerel in the area. Trolling live cigar minnows, sardines, and threadfin herrings have been the most productive method.

Further offshore (in 55-65’ of water), wrecks and artificial reefs are producing amberjack (up to 30 lbs.), mahi, barracuda, and the occasional cobia. Larger bucktail jigs (3-6 oz.) with a curly-tail plastic trailer is an effective way to fire up these amberjacks.

Teresa, of Bogue Inlet Pier, reports that speckled trout have continued to hang in the surf zone, with fish up to 3+ lbs. mixed in.

Anglers getting onto the pier in the evenings are catching good numbers of sea mullet, spot, and pompano.

Spanish mackerel and bluefish have been feeding right beside each other as they attack schools of baitfish in the area.

King mackerel (up to 17 lbs.) are being caught with prime water temperatures now in their range.

A few anglers have had tarpon strikes while king fishing off the end, and it’s only a matter of time before they get a good hookset and land one.