Jerry, of The Reel Outdoors, reports that surf anglers have been able to reach some spanish mackerel coming within casting distance.

A few schools of bluefish are also being caught with glass minnow style casting jigs.

Bottom fishing the beachfront has been producing a good mix of black drum, sea mullet, and a few gray trout, and pompano seem to be showing up more and more each day.

Some sea mullet are holding in deeper holes along the ICW. 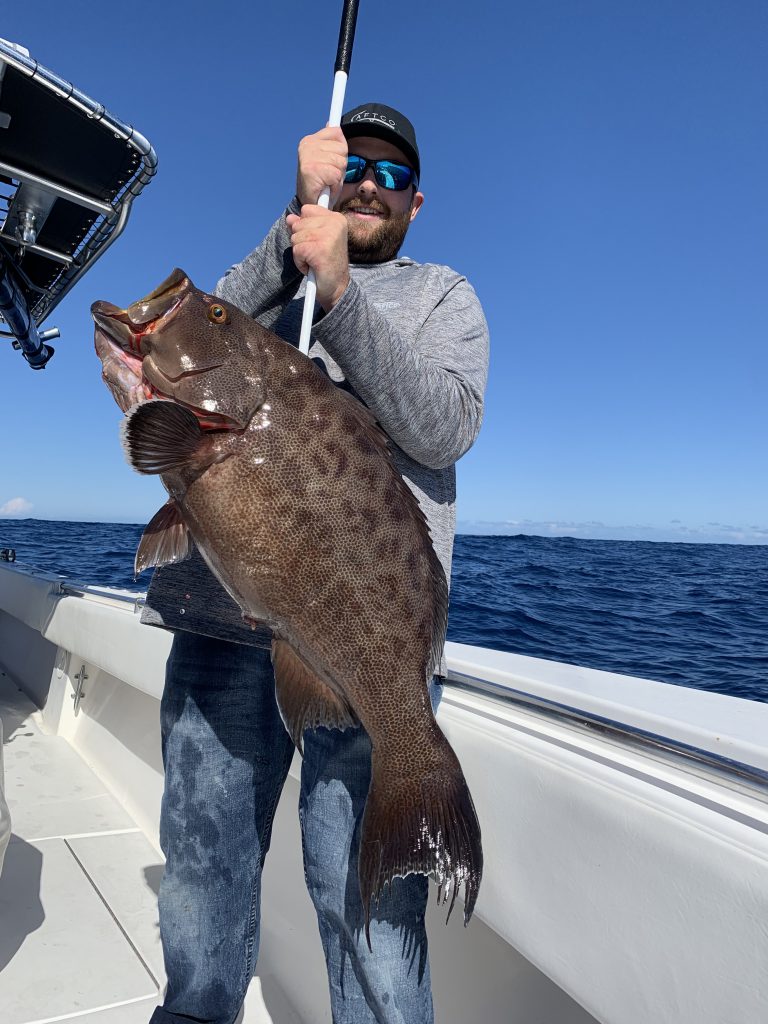 Capt. Crockett Henderson, of Liquid Fire Sportfishing, with a 20 lb. scamp grouper caught in 105′ of water using a live pinfish.

Benjamin, of Dudley’s Marina, reports that spanish mackerel have been thick from areas around the inlets and up along the beach. Trolling Clarkspoons and casting Kastmaster jigs are both getting action.

Cobia are around the area, with some fish landed in the Cape Lookout area and reefs further off the beach.

Inshore anglers have found sheepshead to be moved in and staging up in similar areas as the black drum.

Redfish are being caught in the ICW, with soft plastic jerk baits and shrimp imitation lures.

Flounder have been pushing inshore and are hitting D.O.A. soft plastics and Vudu baits.

Rob, of Sandbar Safari Charters, reports that spanish mackerel have been thick from the 40’ nearshore waters on inside to main river mouths. When fishing off the beach, trolling spoons is the ticket unless sight-casting Stingsilvers to breaking fish. Inshore, on hard rising tide cycles, smaller diamond jigs and speck rigs are getting some strikes.

Black drum and sheepshead are being caught around docks, channel markers, oyster beds, and bridges. Live crabs or shrimp have been producing most of the action.

Redfish are in the backwater marshes in both pods and smaller groups. There are also some smaller redfish pushed up around docks and way up on flats in the estuary. Scented soft plastics paired with light-weight jig heads and topwater plugs have been working great. Cut natural baits are always another good option.

Small bluefish, gray trout, and sea mullet are running in the deeper channels inshore. At this point in their cycles, most of the larger fish have pushed into the ocean.

Johnathan, of On Point Charters, reports that inshore anglers have been finding some good red and black drum action in deeper ICW areas and up inside mainland creeks.

Nearshore action has really picked up with water temperatures on the rise. Spanish mackerel have moved onto the beachfronts in good numbers for anglers casting Stingsilvers (and similar glass minnow jigs) or trolling spoons.

King mackerel are pushing closer in, and the action gets ever better going into summer.

Schools of bluefish are mixed in with the kings and spanish.

Dale, of Fish or Die Charters, reports that red drum have broken up into smaller schools and are spread out through the marshes. Topwater plugs have been working well, with natural baits (such as cut mullet and blue crab) also being very productive.

Anglers are catching black drum and sheepshead around oyster beds. Crabs, urchins, and fresh bait shrimp have all been producing bites.

Bluefish and spanish mackerel are being caught in deeper areas just inside the area’s inlets. This action pushes out and along the beaches where the numbers of both species are much higher.

Some cobia are pushed in with the bait along the beaches. 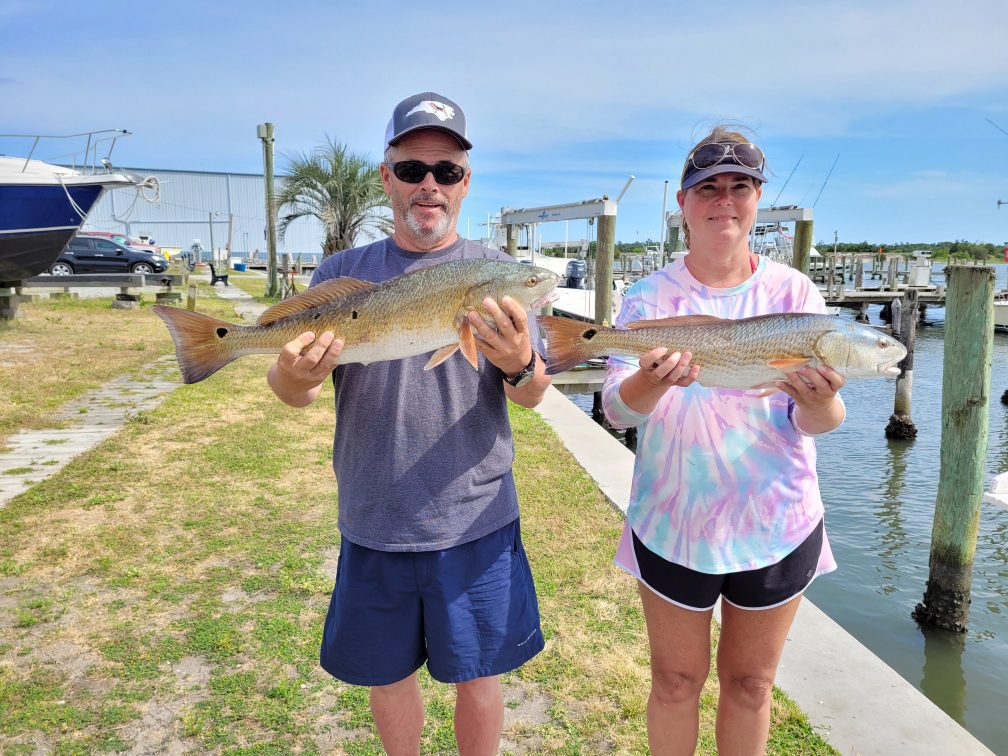 Edison and Genia with two slot reds. The bigger red slammed a Skitterwalk, and the other hit a piece of cut blue crab. They were fishing with Capt. Dale Collins of Fish or Die Charters out of Swansboro.

John, of Early Riser Fishing Charters, reports that offshore anglers are starting to see the arrival of mahi in the region, but this first wave of fish tends to be a bit spotty—wide open one day and gone the next.

Good numbers of sailfish are showing up and could be shaping into another strong season.

Yellowfin and blackfin tuna are both mixed in the trolling action. Recent trips have found that the hot color pattern has been blue and white.

King mackerel are holding over structure in the 5-10 mile range.

Cobia are also holding at the deeper water wrecks. Both slow-trolling live baits and vertical jigs are getting action.

The spanish mackerel bite along the beaches has been very good.

Inshore anglers have found that the red drum are now broken up into smaller schools. Topwater plugs are getting strikes early, with natural baits being a better option throughout the day.

Josh, of Liquid Fire Sportfishing, reports that bottom fishing has been great in keeping lines tight. Anglers are targeting ledges and rock structure in 100’+ depths for good numbers of large scamp grouper, vermilion snapper, porgies, American red snapper, and amberjacks. Cut baits (cigar minnows and squid) work great when rigged on 8/0 circle hooks, and live baits such as peanut-sized pogies and pinfish will consistently provide a shot at larger fish.

Black sea bass are plentiful in structured areas as shallow as 65’.

Cobia are holding around some of this deeper structure, and anglers look for them to be moving in closer.

Teresa, of Bogue Inlet Pier, reports that really good numbers of spanish mackerel (up to 4 lbs.) are showing up in the daily counts.

Anglers off the end have reported spotting cobia cruising around, and the first big king mackerel of the season (34 lbs.) was caught recently.