Hunter, of The Reel Outdoors, reports that surf anglers are finding plenty of action from pufferfish and sea mullet. Bottom rigs fished in the deeper cuts and off piers have been producing most of the bites.

Bluefish are starting to push into the surf zone now, and a few early spanish mackerel are showing up within casting distance. With more bait moving onto the beaches, both the spanish and bluefish action will get more plentiful.

Anglers fishing in the sounds and connecting creeks are finding some good speckled trout action.

Red drum fishing has been steady, with most fish still schooled up back in the marshes.

Nearshore trips have been working the ARs with jigs for bonito and gray trout. 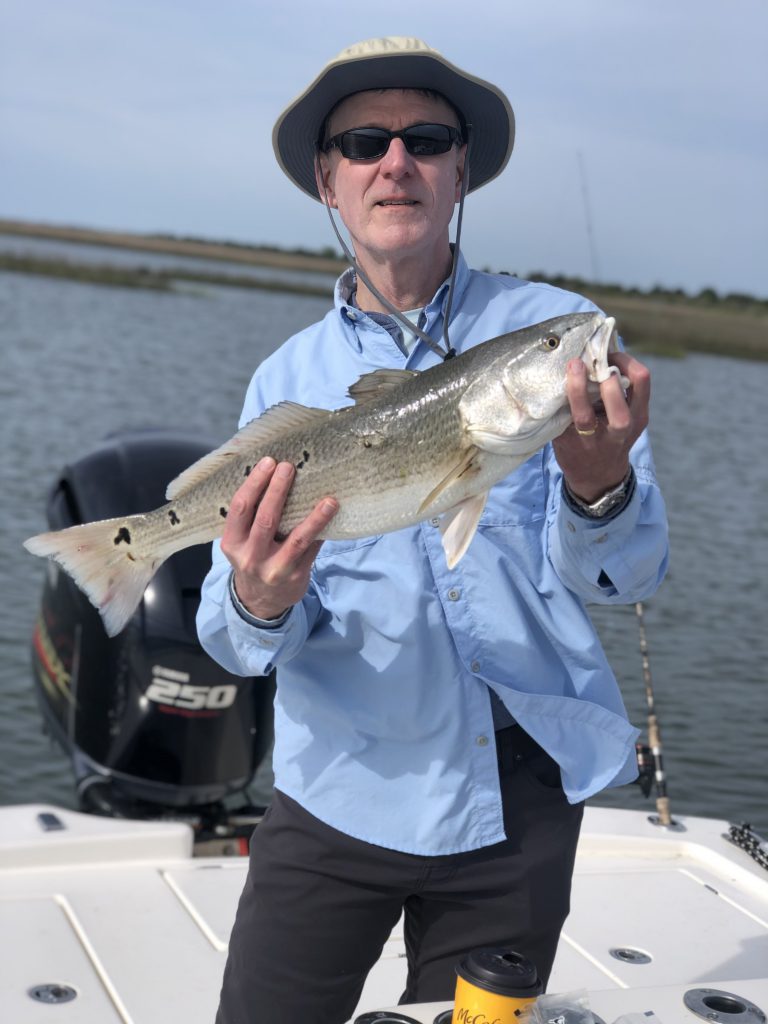 Mike with a redfish caught behind Bear Island using a Carolina-rigged mullet. He was fishing with Capt. Johnathan Garrett of On Point Fishing Charters.

Dylan, of Dudley’s Marina, reports that sheepshead are starting to move into the inshore waters. Target these fish with bottom-rigged baits fished tight up to structure.

Red drum and speckled trout are scattered along the ICW. As more bait moves into the area, the bite will pick up even more.

Rob, of Sandbar Safari Charters, reports that backwater redfish schools are beginning to slowly break out of their large, cool water groups. Anglers are targeting them with live mud minnows, Gulp soft plastics, cut baits, or small topwater plugs. Look in the marshes behind barrier islands and around creek mouths of the more brackish water areas.

Nearshore trips are finding both the bonito and spanish mackerel action getting more consistent.

Good numbers of bluefish, sea mullet, and gray trout are holding in deeper areas from the inlet to the ICW and up into river mouths as they spawn. Fishing fresh shrimp or cut baits during a moving tide cycle will produce most of the action.

There are some black drum around inshore docks and oyster bars. Fresh shrimp fished on the bottom seems to always be best for these fish.

Johnathan, of On Point Charters, reports that nearshore anglers have been seeing some great gray trout action on the local reefs. Jigging Stingsilvers always seems to be a popular tactic.

Black sea bass are plentiful and holding on just about any hard bottom area from 5-15 miles. Squid fished on bottom rigs or bucktails with shrimp are both producing good numbers of strikes.

Bluefish have been working deeper areas around the inlet and are feeding on just about anything thrown around them. Look for the schools to be under bird action or out along the tidelines.

Inshore action is focused around red drum pushed on the flats. Scented soft plastics fished on 1/8 oz. Fathom jig heads are great when finding a group of fish. When not actively feeding, cut mullet on a Carolina rig may entice a bite.

Dale, of Fish or Die Charters, reports that the red drum bite has been steady as the fish transition out of their large, winter-time schools. Some anglers fishing the flats are having success with topwater plugs and Z-Man or Gulp soft plastics. Cut mullet or blue crab fished on bottom rigs has also worked well around structure and oysters.

Bluefish (up to 3 lbs.) are pushing into the inlets and hitting Stingsilvers or Gotcha plugs worked on the surface.

Speckled trout fishing has been hit or miss on recent trips.

John, of Early Riser Fishing Charters, reports that bluewater trips are having some of the best tuna fishing seen in recent years. Really good numbers of yellowfin tuna are coming in, as are the typical blackfin tuna numbers, and a few larger wahoo are mixed in the trolling bite.

Scattered mahi are already in the counts, but May is a big month for them. Look for numbers to go way up as these fish move their way into the area.

Nearshore anglers have been doing well while trolling Yo-Zuri deep diver plugs around the nearshore ARs. Spanish mackerel, bonito, false albacore, and smaller king mackerel are all part of the mixed bags. 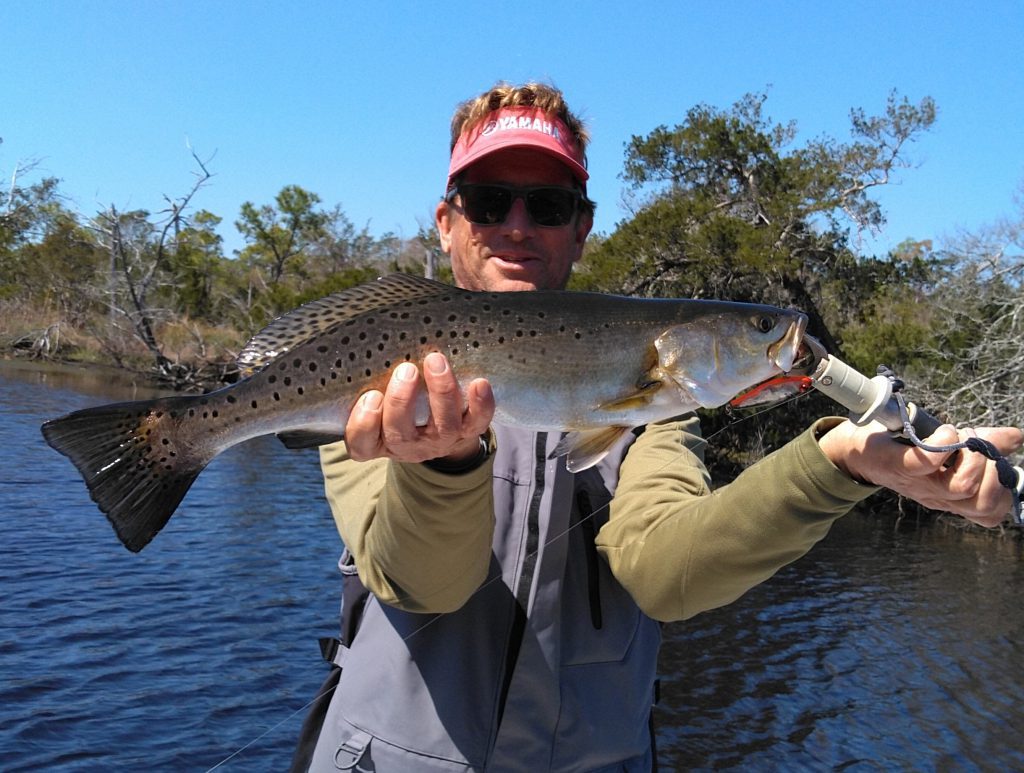 Chad Barnes, from Pawleys lsland, with a trout caught using an MR-27 in the New River. He was fishing with Capt. John Parks of Early Riser Fishing Charters.

Mark, of Liquid Fire Sportfishing, reports that the early nearshore action has begun off of the Crystal Coast, as king mackerel (from 4-10 lbs.) have migrated to the beach in search of easy prey.

Water temperatures have begun rising into the mid-60 degree range, bringing in schools of anchovies and glass minnows which provide meals for these schoolie kings. Slow trolling a Yo-Zuri deep diving plug on a 40 lb. fluorocarbon leader is a simple, quick way to fill the fish box. Popular color patterns have been tiger, blue sardine, and white/red head, and target ledges and rocks in 40-50’ range. Slow-trolling live bait or #1 gold or silver colored Clarkspoons behind planers can also be very productive.

Large bluefish (up to 5 lbs.) are feeding alongside the kings, with the same tactics getting them to leave the safety of their bottom structure.

Teresa, of Bogue Inlet Pier, reports that bottom fishing has been great with black drum (up to 5 lbs.), sea mullet, and blowfish hitting a variety of baits.

Some speckled trout have been mixed in for anglers out in the morning or evening hours.

Early runs of spanish mackerel are moving into the pier area, and they’re hitting casting jigs and Gotcha plugs.