Randy, of The Reel Outdoors, reports that anglers are catching good numbers of pompano in the surf.

There are some schools of spanish mackerel pushing in on bait balls close to the beach. When within casting distance, anglers are having success throwing glass minnow jigs at the feeding frenzies.

Speckled trout just started to show up in the surf. Cooling water temperatures over the next few weeks should see more trout in the surf, as the trout follow inshore bait out into the ocean. 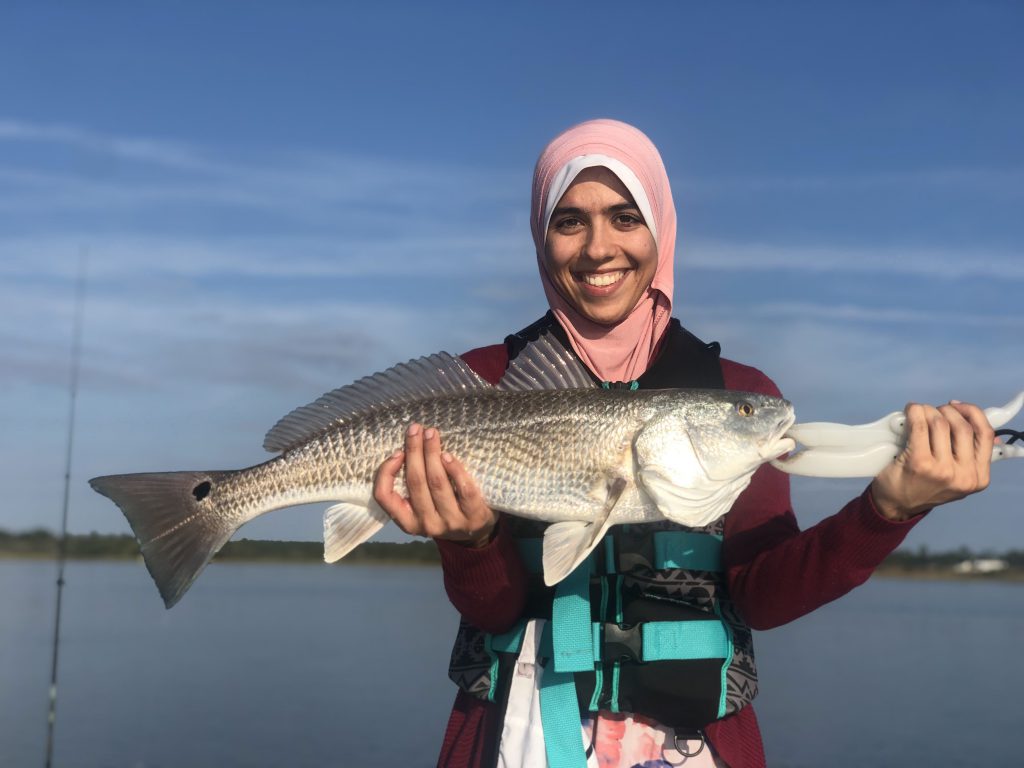 Rana Abutaleb with a 27″ red drum that hit cut mullet on a Carolina rig. She was fishing a marsh near Swansboro with Capt. Matt Littleton of Friendly City Fishing Charters.

Benjamin, of Dudley’s Marina, reports that the redfish bite has been consistent, with anglers finding action on both topwater plugs and soft plastic baits.

Flounder fishing has been good (outside of keeper season, of course), especially with all the mullet and glass minnows pushed inshore.

Speckled trout action is heating up, but the current feeding action has been very tide dependent. Look for water temperatures in the upper 60s to see all-day action really fire off.

Nearshore fishing has been all about the surface action. Anglers are having success with spanish mackerel and false albacore while casting jigs, trolling Clarkspoons, and live bait fishing.

Surf fishing has been strong for anglers out doing some bottom fishing. A mixed bag of pompano, sea mullet, and black drum are feeding on fresh shrimp and sand fleas.

Rob, of Sandbar Safari Charters, reports that speckled trout fishing has been picking up with the seasons changing. Anglers are finding action while targeting oyster bars and channel bottlenecks in the river. Live shrimp rigged under corks have been getting most of the strikes, and these inshore areas are also holding scattered redfish.

Trout are also being caught out in deeper tidal creeks around the inlets. These schools are more focused on smaller live mullet and soft plastic Zoom Flukes.

False albacore and spanish mackerel are schooling around the nearshore structures. Anglers have found the fish fairly easy with all the birds homed in on the bait balls. Small casting jigs and flies have been the best bet.

Red drum are schooling up thick in the surf zone and will bite about anything in fishable conditions.

Further off the beach, king mackerel and grouper are feeding well in the 5-15 mile range. Live baits have been the top choice for both species.

Johnathan, of On Point Charters, reports that speckled trout have started to make a good showing in deeper creeks around the inlets. They’ve been mainly targeting live shrimp and mullet, but as their presence begins to drop, look for the aggressive action to switch over to artificial baits.

Redfish have stacked up big time in the surf zone, and most will stay there through winter. Anglers can target them while riding down the beach on calm days and looking for them in the breakers. On the rougher days, it is beneficial to fish cut or live baits around the inlet.

False albacore are just about everywhere outside the inlets. Anglers are sight-casting small metal jigs at schools busting on bait balls.

John, of Early Riser Fishing Charters, reports that speckled trout fishing in the New River has been awesome and should continue if weather patterns stay dry. The lack of rain over the past few months has these schools following the salinity and bait upriver and actively feeding. Topwater plugs and MirrOlure MR-27s have both been great lures to entice trout strikes.

Red drum have started to school up back in the marshes and out along the beachfronts. Anglers looking to target the surf zone should look for calm seas and light north winds to run the shorelines and sight-cast Gulp and similar scented soft plastics to the schools.

King mackerel fishing has been awesome, and the bite should stay strong until water temperatures in the 60s get the fish pushing offshore.

Scattered sailfish and blackfin tuna are also being caught within sight of land. 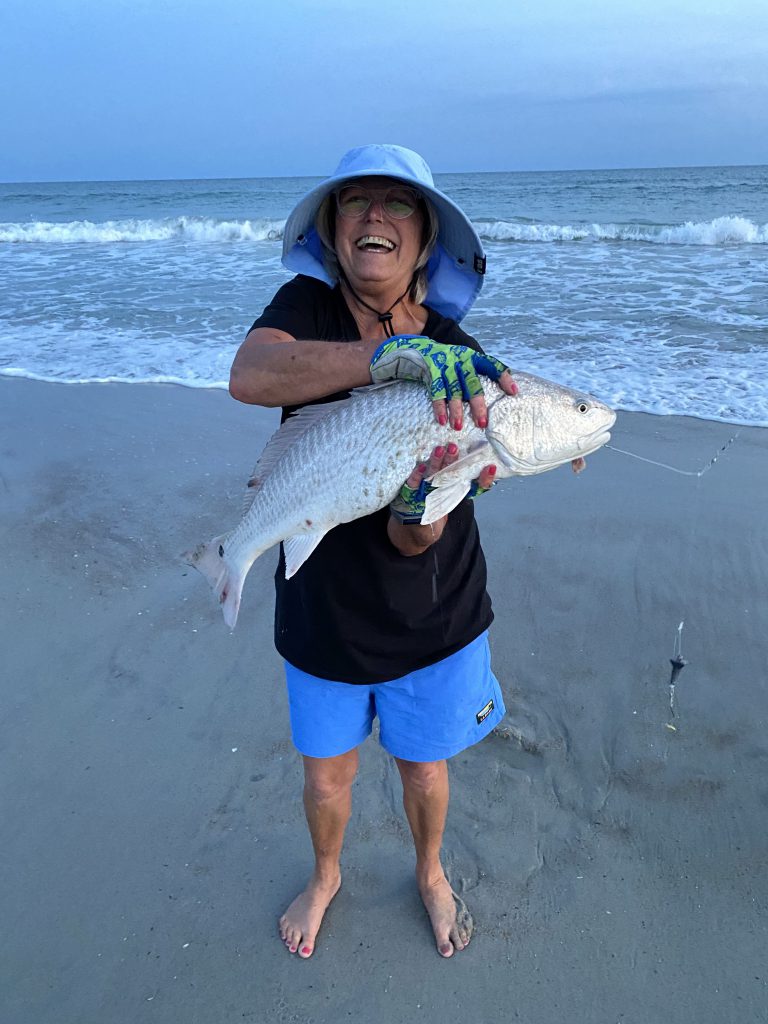 Sandra England, from Fuquay Varina, with a red drum caught from the surf in Pine Knoll Shores. She was using cut pinfish.

Mark, of Liquid Fire Sportfishing, reports that blackfin tuna, false albacore, spanish, king mackerel, and wahoo have all been prevalent as water temperatures cool and cold fronts push through the Crystal Coast.

Anglers targeting depths of 45-100’ can produce any of these species during this time of year. A wide variety baitfish (from glass minnows and menhaden to cigar minnows) can be found from the deep structured areas to along the water’s surface.

Gag grouper and American red snapper are actively feeding as well. While the snappers are out of season, their fight is strong and they are living in the same areas as the gag grouper, which are still in season. If you’re making sure to vent properly, the American reds can be fought and released to fight another day.

Mike, of Bogue Inlet Pier, reports that pompano action has been really good over the past week, with plenty of good-sized fish (to 2 lbs.) being pulled in.

Bottom fishing has also been producing both black drum and puppy drum.

Anglers fishing off the end have been finding some good king mackerel fishing, with fish to 25 lbs. hitting live baits.

Sight-casting has been very popular over the past weeks, as anglers target fish feeding on the bait balls pushing past the pier. A mix of hard-fighting false albacore, spanish mackerel, and bluefish are all a part of this action.