Randy, of The Reel Outdoors, reports that surf fishing has picked up now that we’ve moved into fall. There are plenty of bait schools running along the beaches, and this is leading to a wide variety of species being landed.

Bottom fishing has been producing pompano, croakers, and black drum.

Bluefish and spanish mackerel are coming within casting distance of anglers rigged with spoons, and fishing the inshore waters is producing a mixed bag of bluefish, speckled trout, croakers, and red drum.

Benjamin, of Dudley’s Marina, reports that speckled trout action is picking up, with anglers catching most of the trout while working deeper holes and banks along the ICW. A variety of MirrOlure MirrOdines, soft plastics, and live shrimp under corks are all getting strikes.

Redfish action has been good, especially now with so much bait moving about. Targeting structure in the ICW and flats in the marshes are both producing action.

Flounder season was great both inshore and on nearshore reefs in the area. Anglers fishing baits on the bottom for drum will still find some catch-and-release flatfish as part of the bycatch.

Targeting bridges and dock pilings has produced some good-sized sheepshead and black drum.

Some citation-class red drum are being caught in the New River around bait pods, and trout fishing in the river has picked up a lot with the weather pattern changes.

Anglers trolling off the beach are hooking spanish and king mackerel, and surf anglers that are bottom fishing are having success with black drum and sea mullet. 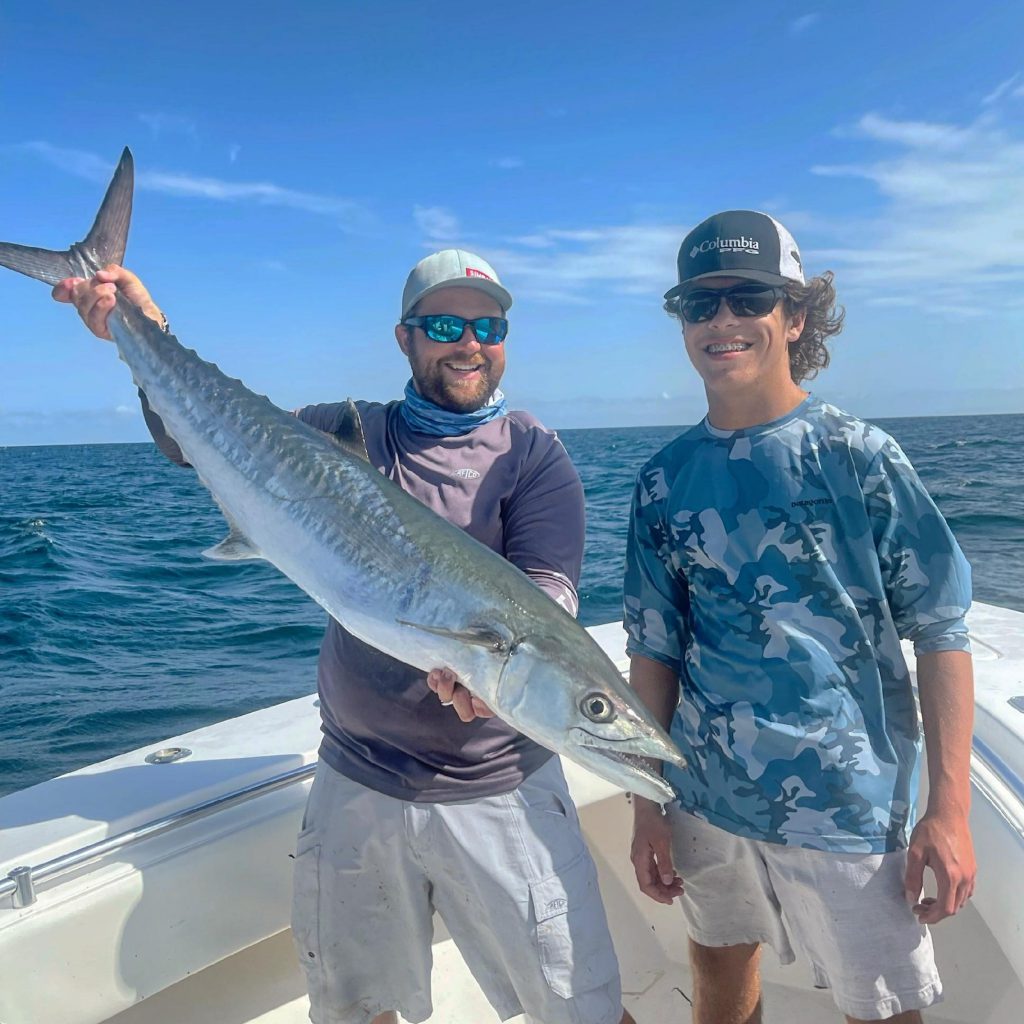 Gatlin Peffley (right) with a 24 lb. king caught off Bogue Inlet slow trolling live menhaden in 60′ of water. He was fishing with Capt. Crockett Henderson (left) of Liquid Fire Sportfishing.

Rob, of Sandbar Safari Charters, reports that red drum, flounder, and speckled trout are all on the move this month as they follow the annual bait migration. Anglers will find the most success while targeting marsh banks, sandbars, and channels around the inlets that hold these migrating mullet.

Black drum and sheepshead are chewing hard before pushing back into the ocean. Targeting docks, bridges, and oyster bars with shrimp or crabs will help find strikes.

Spanish mackerel and bluefish numbers have picked up around the inlets. Small Gotcha plugs and fishing spec rigs are both getting strikes.

Off the beach, anglers will find king mackerel and grouper to be pushed inside the 10-mile range. Live pinfish or menhaden will help in finding success at the reefs.

Dale, of Fish or Die Charters, reports that the red drum bite is on fire in the marshes around Swansboro. Weather pattern changes have kicked off the mullet run, and this has pushed all the inshore species to actively feed.

Speckled trout are also starting to become more common for anglers targeting deeper holes near feeder creeks and around the inlet. Carolina-rigged live finger mullet and Z-Man soft plastics are getting strikes from both the trout and red drum.

Anglers fishing the pilings of local bridges are catching good-sized black drum and sheepshead. Fiddler crabs and live shrimp are the most successful baits.

John, of Early Riser Fishing Charters, reports that anglers paying attention to the weather changes look forward to king mackerel action firing off this month. Starting as soon as now, the bigger kings start to move nearshore to feed on all the bait.

Wahoo fishing is picking up, with anglers finding success while pulling high speed lures as well as the tried-and-true ballyhoo behind black/red and black/purple Sea Witch skirts.

Fishing around offshore structure will produce a few cobia.

Inshore trips are finding speckled trout action to already be solid and getting better each day. Topwater baits have garnered the most success early, with soft plastics and live baits producing more bites later in the day. 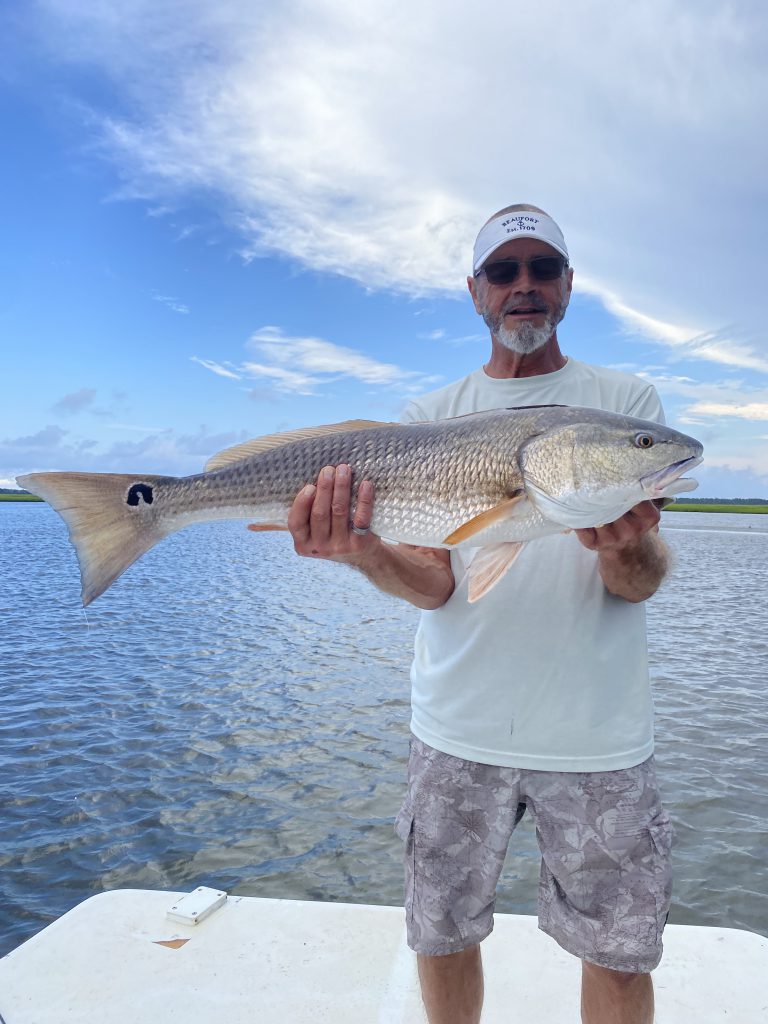 Roger Shepherd with a 33″ red drum caught (and released) in 2′ of water using a live shrimp. He was fishing in the Swansboro area with Capt. Rob Koraly of Sandbar Safari Charters.

Josh, of Liquid Fire Sportfishing, reports that the feasting activity of offshore and nearshore pelagics has started and a steady bite from the bottom dwellers (such as black sea bass) remains strong.

While offshore temperature breaks are still becoming more defined, it is helpful to use electronic tools such as the Sirius Fish Mapping service to help target specific area where plankton and upwellings are defined.

Wahoo and sailfish have been willing to play in the Gulf Stream for anglers pulling both small and medium ballyhoo. The darker skirts in black/purple, black/red, and black/orange color patterns have been producing most wahoo strikes, while lighter blue/white or pink/white patterns are getting the attention of sailfish.

Mike, of Bogue Inlet Pier, reports that anglers doing some bottom fishing are seeing big changes, with cooler temperatures allowing for better catch numbers throughout the day versus the sporadic action in the mid-summer heat. A mixed bag of pompano, croakers, sea mullet, and black drum have all been coming over the rails.

Puppy drum action has picked up a lot, with all the bait along the beaches pulling fish out of the inlets. Fishing shrimp or mullet on bottom rigs is producing redfish to 6 lbs.

Anglers are catching bluefish and spanish mackerel while casting jigs at feeding frenzies around baits balls.

King mackerel (to 28 lbs.) started showing up. Going into October, anglers look forward to this bite really picking up as schools move onto the beaches.