Randy, of The Reel Outdoors, reports that schools of finger mullet have started running in the surf. This has pulled the schools of spanish mackerel and bluefish up to the beaches and at times running inside of the sandbars where anglers can cast jigs at the surface-feeding fish.

Bottom rigs tipped with fresh shrimp are producing black drum and sea mullet. A few red drum are mixed in, and they’re feeding on shrimp and cut bait.

Benjamin, of Dudley’s Marina, reports that even when hot weather is the pattern, that hasn’t stopped anglers from finding some red drum action. Slot-sized reds are holding around docks and holes along the ICW. Both Carolina-rigged live bait and soft plastic paddle tails are getting strikes.

Some scattered, smaller trout are mixed in the deeper holes and channels with running current.

Some over-slot to citation-class red drum are pushed inshore and are being caught around deeper drop-offs in the New River.

Black drum and sheepshead are staged up around ICW docks and bridges for anglers fishing with crabs or shrimp. Jawbreaker jigs have been great for helping anglers detect the slight tap of a sheepshead bite.

Flounder action has been hot, with good catches coming from both nearshore reefs and inshore banks and docks. 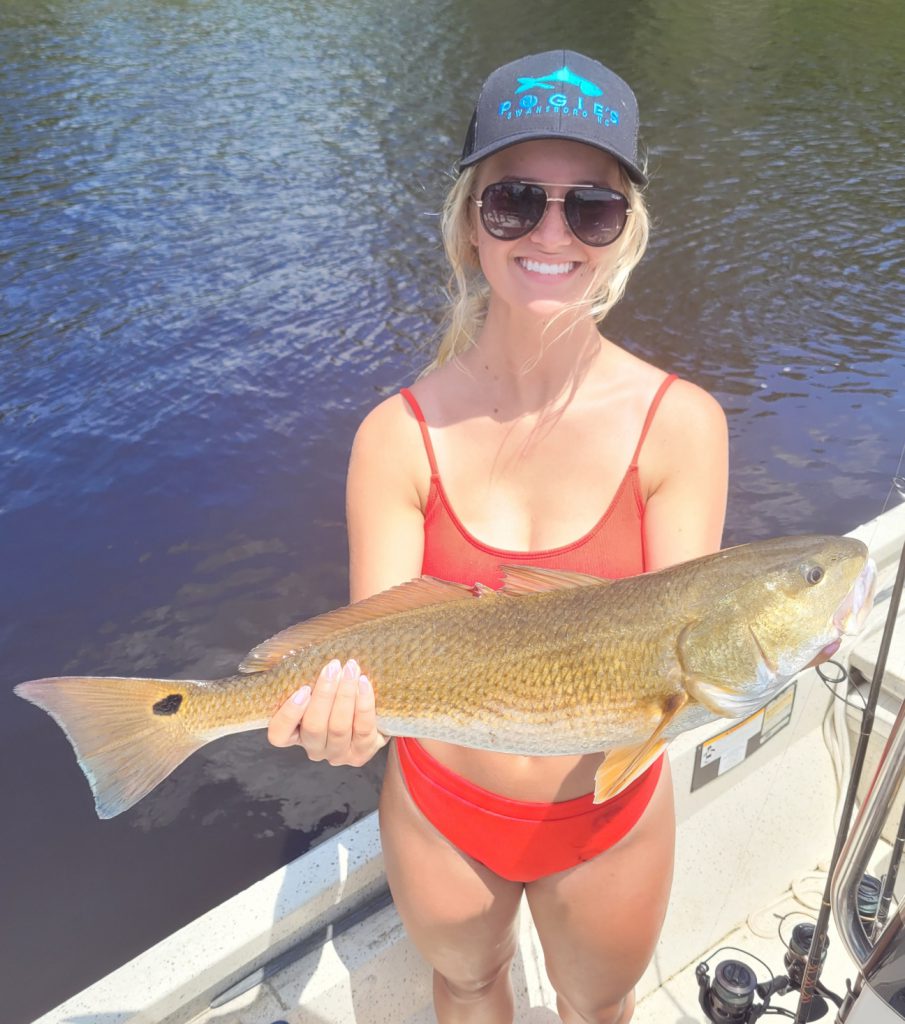 Lindsay Ray, of Yadkin County, with an upper-slot redfish that hit a pogie on a Carolina rig. She was fishing the Swansboro area with Capt. Dale Collins of Fish or Die Charters.

Rob, of Sandbar Safari Charters, reports that inshore fishing has been good for anglers following the patterns of summertime fishing. Red drum, black drum, speckled trout, and flounder have all moved into the ICW and deeper channels. The abundance of bait and cooler water temperatures in these areas are what draw the species in. Natural baits are best in the summer, with mullet, shrimp, and pogies all being successful. Target docks on the lower tide cycles, and then shorelines or grass banks on high tides.

Up in the rivers, oyster bars and creeks are holding drum and some scattered speckled trout. Shrimp or mullet fished under popping corks have been a deadly combo for both species.

Johnathan, of On Point Charters, reports that red drum fishing has been great, even with fish in a scattered summertime pattern. Topwater plugs are getting action for anglers fishing early, but switching over to natural baits or soft plastics is a must when the sun gets high and slows the bite down.

Speckled trout have been mixed in the action all season, which is great compared to past years.

Anglers fishing around the area’s bridges are landing some good-sized black drum.

For flounder, anglers should be targeting the flatfish around inshore structure and on the nearshore reefs. Both jigs and live bait will be productive.

Dale, of Fish or Die Charters, reports that the flounder bite has been good from areas around creek mouths, along grass points, on oyster points, and under docks along the ICW. Live mullet fished on Carolina rigs and Z-Man baits fished on lightweight jig heads are both getting strikes. Gulp soft plastics also produce a lot of bites with the extra scent they provide.

The red drum bite is steady for anglers fishing Carolina-rigged live menhaden and mullet. Rapala Skitterwalks and similar topwater plugs work well for those on the water early in the morning.

A few speckled trout are being caught in deeper channels around the inlets with live bait and soft plastics on light jig heads.

John, of Early Riser Fishing Charters, reports that sailfish, dolphin, wahoo, and even tuna are all offshore during September. High water temperatures have the typical Gulf Stream species scattered everywhere as they travel to follow conditions and bait. Slow trolling live baits has been out producing dead baits on recent trips, but either tactic sees the early morning bite being most productive.

Running out to the Stream has produced some good-sized wahoo early, and then anglers switch to searching out grass paddies and weed lines for dolphin. Finding the cover has been key to producing good numbers of bailer-sized fish.

Billfish have been holding out in the 100-fathom range.

Inshore anglers have been seeing good red drum and speckled trout action. Topwater plugs fished first thing in the morning have been doing the trick, and then anglers are switching over to live bait as the sun gets higher.

With summer fishing, the overall key is to fish early and take advantage of fish feeding in the cooler part of the day. 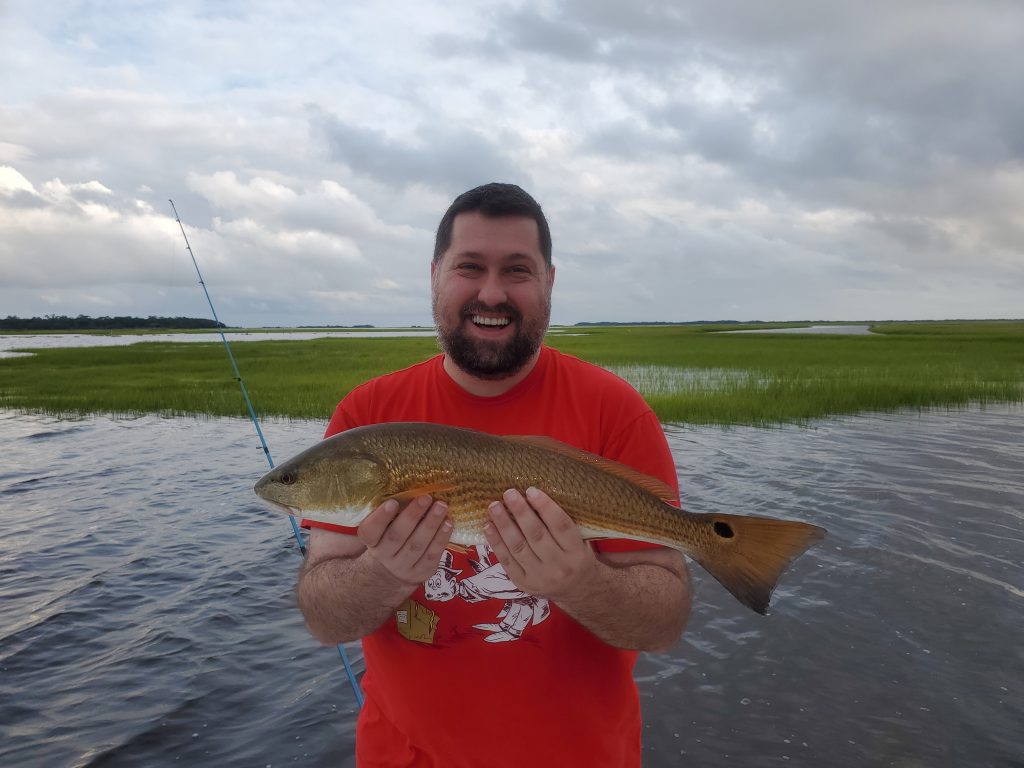 Anson Sokoloff hooked this red drum on chunked mullet while fishing a marsh near downtown Swansboro.

Josh, of Liquid Fire Sportfishing, reports that amberjack, barracuda, sharks, and king mackerel have been actively feeding over wrecks in the 65-85’ range.

High water temperatures (into the mid 80s) have the bait spread throughout Onslow Bay, but the bait congregates most around these structured areas. At times, this abundance of bait makes presenting natural baits difficult. Live pinfish and menhaden are great baits and easy to round up for anglers heading off the beach.

Having a cigar minnow drifting in the spread is a good idea, too, as it opens the opportunity of a nearby king mackerel, blackfin tuna, or amberjack strike.

Teresa, of Bogue Inlet Pier, reports that anglers have been seeing a great run on spanish mackerel (to 5 lbs.) when casting Gotcha plugs and glass minnow jigs at surface-feeding schools.

A few king mackerel (to 19 lbs.) are hitting the live baits rigged off the end. As it gets closer to fall, look for this action to pick up as the kings move steadily closer to the beaches.

A few sheepshead (to 3 lbs.) are being caught by skilled anglers fishing the pilings, and bottom fishing is producing pompano, croakers, and sea mullet.