Gavin, of East Coast Sports, reports that surf anglers have been pleased to find Virginia mullet running in the surf. These are usually the first species to arrive back on the coast, signaling that spring is on its way.

Some black drum are feeding on bait shrimp fished in the deeper holes along the beach.

Inshore anglers are finding speckled trout fishing to be picking up as water temperatures rise. Most of the action is still coming from creeks where the fish held over the winter.

Red drum are feeding inshore around oysters and mud flats.

Anglers have begun to spot false albacore and bonito in the 3+ mile range. Over the next few weeks there should be more fish pushed closer to the beaches and surface-feeding on bait schools. 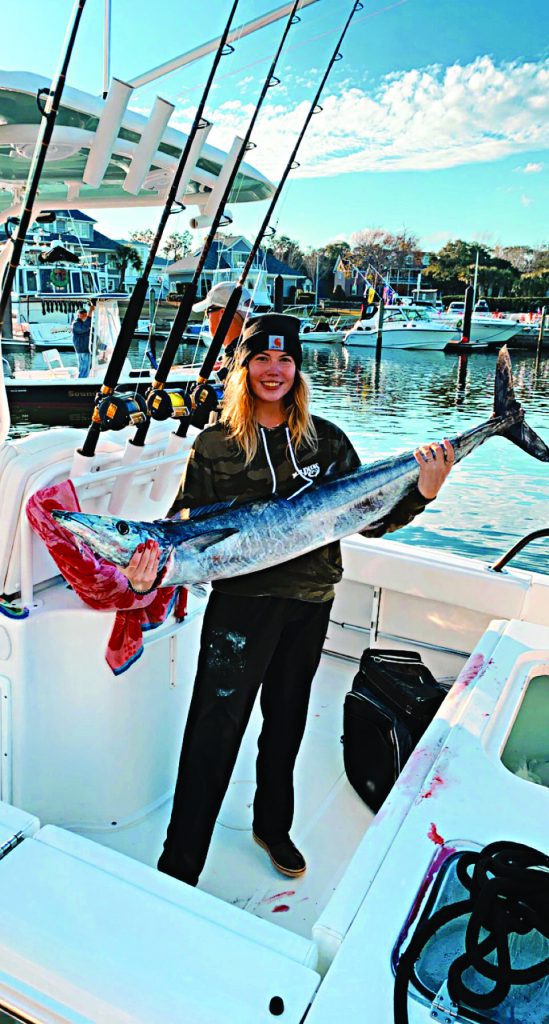 Sydney Price with a 60 lb. wahoo that was hooked on a ballyhoo rig while fishing the Gulf Stream out of Topsail.

Mike, of Native Son Guide Service, reports that red drum action is only getting better with more fish now pushing in from the ocean. The reds are still holding in their large school pattern, where they tend to be very easily spooked. Fishing small baits has been key to getting strikes when finding these groups. Z-Man soft plastic tube baits rigged weedless with Pro-Cure scents has been working great.

Black drum and sheepshead fishing has been pretty good along the ICW. Target these fish around docks, jetties, and big oyster rock structures with Carolina-rigged fresh shrimp.

With water temperatures getting up close to 60 degrees, the speckled trout action is starting to pick back up. It has been a bit of an “off” bite over the last few weeks, but this could turn around with the weather change. Anglers will find some larger trout around when night fishing around the full moon this month.

Off the beach, anglers are waiting for winds to subside to run the offshore wrecks for large black sea bass.

Bonito will be arriving any day now. Target these surface-feeding schools in the 20-60’ depth range.

The first wave of bluefish will be mixed in this same area.

By the end of April, we should be seeing the first spanish mackerel arrive, along with larger schools of bait.

Ray, of Spring Tide Guide Service, reports that with the weather finally warming up, anglers are seeing the speckled trout bite turn on. The bonus of having very little recent rains is the New River area is producing more action. These trout are hitting bigger baits as it gets closer to spring. Storm swimbaits, Betts Halo Shad, and MirrOlure MR-17s and MR-27s in a wide variety of colors have all been producing strikes. On the cooler days, soft plastic Gulp and Storm shrimp imitation baits are working best.

A few red drum are mixed in with the trout. Over the next month, the red drum action should pick up as the schools near the ocean start breaking up and spreading throughout the area.

Nearshore fishing is just starting up, with bonito arriving in the 1-3 mile range. Anglers’ favorite tactic is throwing Big Nic Spanish Candy jigs at the surface-feeding schools. When marking the fish deeper, trolling also produces strikes with Yo-Zuri deep divers, Drone spoons, and Clarkspoons being the top choices. This bonito action tends to be hot and fast, with action sticking around for 2-3 weeks.

Shortly behind the schools of bonito are huge spanish mackerel. These schools will be arriving along with the menhaden pods. Casting Big Nic lures at the bait schools or flipping live menhaden at the edges will net some of these larger spanish.

Jim, of Plan 9 Charters, reports that bluefish have started to arrive in the area. These schools are holding from the surf zone out to about 5 miles. This first wave has anglers seeing plenty of 1-2 lb. fish.

Schools of false albacore are being found from nearshore structure out to 15 miles. This is also a precursor to bonito which should be arriving any day.

Black sea bass fishing has been steady, with most of the larger fish holding outside the 15-mile mark.

The plentiful black sea bass nearshore are mixed in with grunts, porgies, tautogs, and sheepshead. Cut squid or minnows fished on bottom rigs has been best for all the structure-oriented species.

Tasha, of Jolly Roger Pier, reports that sea mullet are showing up in good numbers for anglers fishing bottom-rigged baits.

Over the next few weeks, red drum should be showing up more often. Cut finger mullet and shrimp will produce those strikes.

Speckled trout could make a run along the surf zone as they move around outside the inlets. 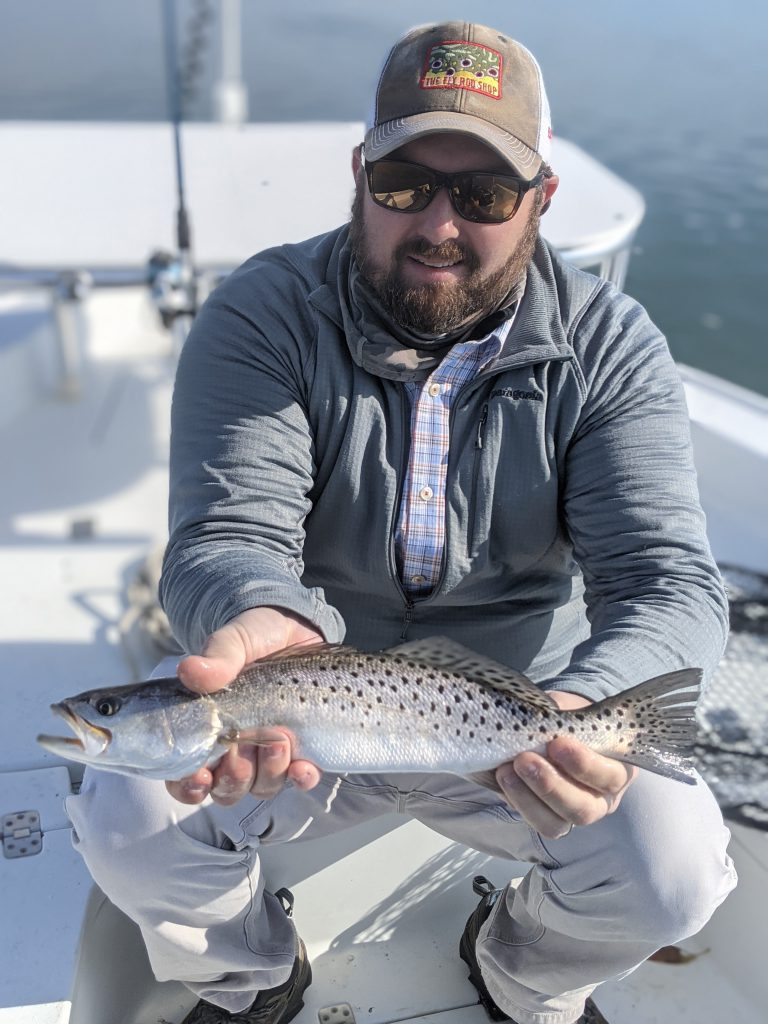 Will Rabon with a speckled trout caught in the Topsail Sound while throwing a MirrOlure MR-17 in the pinfish color. He was fishing with Capt. Mike Oppegaard of Native Son Guide Service.

Garrison, of Surf City Pier, reports that sea mullet are the main catch in daily counts. They tend to be the first species to arrive at the coast to signal spring-time fishing.

Shortly behind should be the arrival of pufferfish. They will be feeding on shrimp fished along the bottom.

A mix of black drum will be included with the bottom fish action.

Schools of bluefish should be showing up soon.

Spanish mackerel come in behind the bluefish, but with this year’s weather, anglers are not expecting them until the end of the month.

Tyler, of Seaview Pier, reports that sea mullet are out in good numbers for anglers looking to take advantage of the good weather days.

Most of the other species haven’t shown up in any real numbers yet, but anglers expect to see speckled trout, black drum, and red drum in the counts over the next few weeks.

Bluefish and spanish mackerel should also be showing up this month, with the spanish arriving mainly towards the end of April.