Mike, of East Coast Sports, reports that inshore anglers are experiencing some good red drum action. The smaller groups of fish have been holding on shallower marsh flats and areas along the ICW. Topwater baits (fished in the low light hours) and soft plastics (fished all day) are providing most of the strikes.

There are a lot of flounder on the inside, though they can’t be kept of course.

Sheepshead fishing has been productive around docks and area bridges.

The offshore action has been slow. 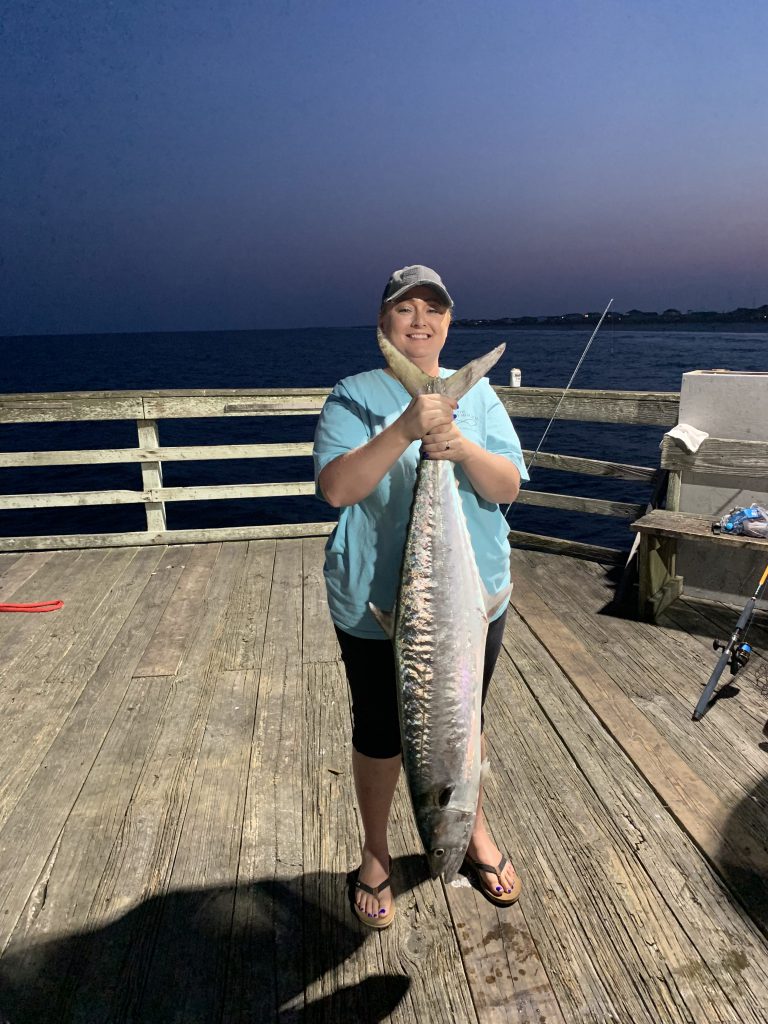 Brandi Smith with the 34 lb. king she caught on a live menhaden while fishing from Jolly Roger Pier.

Mike, of Native Son Guide Service, reports that spanish mackerel fishing has been good for anglers headed off the beach. Recent trips have found the schools to be holding deeper (around 30’), with 00 sized Clarkspoons behind #1 planers providing most strikes.

There are plenty of king mackerel out in the 15 mile range. Beaches to the south are seeing action move right onto the shoreline, and it shouldn’t be long until the Topsail area sees the same.

Scattered large false albacore are also in this 10-15 mile range, and nearshore bottom fishing has been producing plenty of black sea bass and grunts.

Inshore trips have been finding steady red drum action. With the summertime conditions, some days just produce better than others, but overall numbers are really good. Live baits have been working best to keep up with all the inshore baitfish. Artificial soft plastics are also having success and work great for anglers scouting new areas. As typical with mid-summer trips, getting on the water early in the morning or late in the day is going to provide the most success.

A few speckled trout are mixed in the action, with most strikes coming in the cooler early and late hours.

Though keeper season has yet to open, there are plenty of flounder around. These fish are holding under bait from inshore creek mouths and ICW docks out to the nearshore wrecks.

Ray, of Spring Tide Guide Service, reports that red drum fishing has been very good throughout the area, as conditions have plenty of bait pushed inshore. Anglers on the water early have had success with gold spoons and topwater plugs. Once the sun has risen, Carolina-rigging cut baits has been producing the most action. Just about any areas inshore are holding small groups of reds, from ICW docks to marsh flats and up in holes alongside oysters in mainland creeks.

Speckled trout have been mixed in for anglers targeting the inshore waters from Topsail down through Wilmington. Live mullet fished on Carolina rigs have been great fished in deeper holes with nearby structure.

A few flounder are being caught inshore, but most action is off the beach. Anglers fishing live baits at the nearshore wrecks are reporting 4-5 lb. flounder being caught as bycatch for those targeting other bottom fish species.

Trolling off the beach is producing spanish mackerel.

Jim, of Plan 9 Charters, reports that spanish mackerel fishing has been really good, with a nice class of 2-4 lb. fish mixed in with the average 18” catches. The schools are definitely moving throughout the whole water column. Some days the top lines do well, and then the next day will see most action under the planers. The smaller #0 and #00 Clarkspoons with a gold or pink flash color pattern continue to produce best. The schools are holding in the 15-50’ water depths, with cleaner water producing better fishing.

King mackerel action has been steady in the 6-12 mile range. It has been a pretty consistent 24-30” class of kings, but a few larger ones are in the mix. Slow trolling dead cigar minnows has been working well.

A little further out, the 20 mile range is holding scattered groups of mahi for anglers fishing the same skirted dead baits.

Josh, of Jolly Roger Pier, reports that spanish mackerel and bluefish are being caught with Gotcha plugs cast towards fish breaking bait balls on the surface.

Some black drum and redfish are also being caught on bottom rigs, with most action being at night. Shrimp has produced best for the black drum, with the reds preferring cut bait. 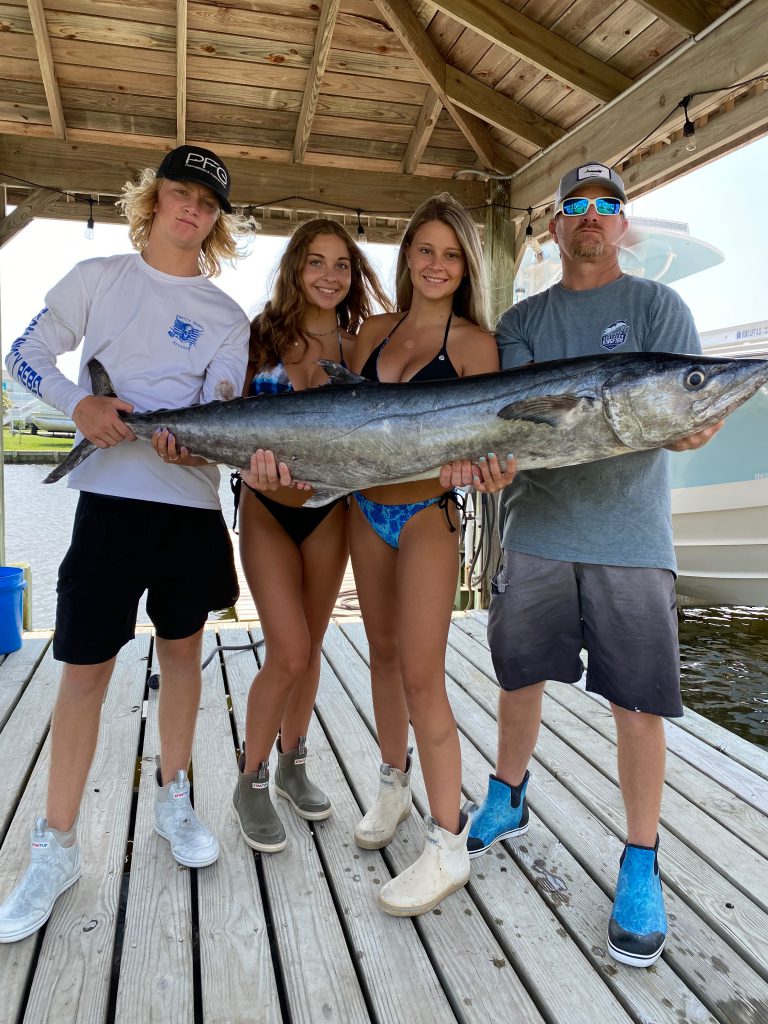 Sean Strickland, Kolt Strickland, Kyli Strickland, and EllaRyan Mille with a 44.2 lb. king mackerel that fell for a piece of dead bait. They were fishing in 50′ of water off Topsail Island.

Vinita, of Surf City Pier, reports that bottom fishing has been better in the evenings, with catches of spot, croakers, sea mullet, and sheepshead on fresh shrimp or bloodworms.

Some good-sized speckled trout are being landed in the mornings, and scattered slot-sized red drum are being hooked with Carolina-rigged cut bait.

Spanish mackerel fishing has been great, with many larger fish (up to 6 lbs.) in the mix, and king mackerel (up to 28 lbs.) are being caught on live baits fished on king rigs off the end.

Tyler, of Seaview Pier, reports that the sight-feeders have been on the move, with quite a few king mackerel (up to 33 lbs.) being caught on the king rigs.

Large spanish mackerel (up to 6.4 lbs.) are also feeding around the pier. The larger fish are hitting live baits. Casting diamond jigs and Gotcha plugs are producing a few strikes, but not nearly as much as live bait.

A few schools of bluefish are moving through the area and hitting casting jigs.

With all the bait pushed into the beaches, there have also been plenty of sharks around, too.

Bottom fishing has been a bit slow, with the best action being early and late in the day.

Speckled trout are being caught with live shrimp under float corks, and sheepshead are hanging tight to the pilings and striking Carolina-rigged fiddler crabs.