The local piers are seeing the same surf species, with the addition of black drum holding tight to the pilings.

Inshore anglers have been reporting decent speckled trout fishing throughout the fall. With water temperatures falling, this bite has started to slow down as the fish transition back into mainland creeks where they holdover through the winter.

Wintertime fishing on the coast requires plenty of patience. Take advantage of the warmer days, and fish with the freshest, natural baits you can find, or if using artificial baits, fish them slow. 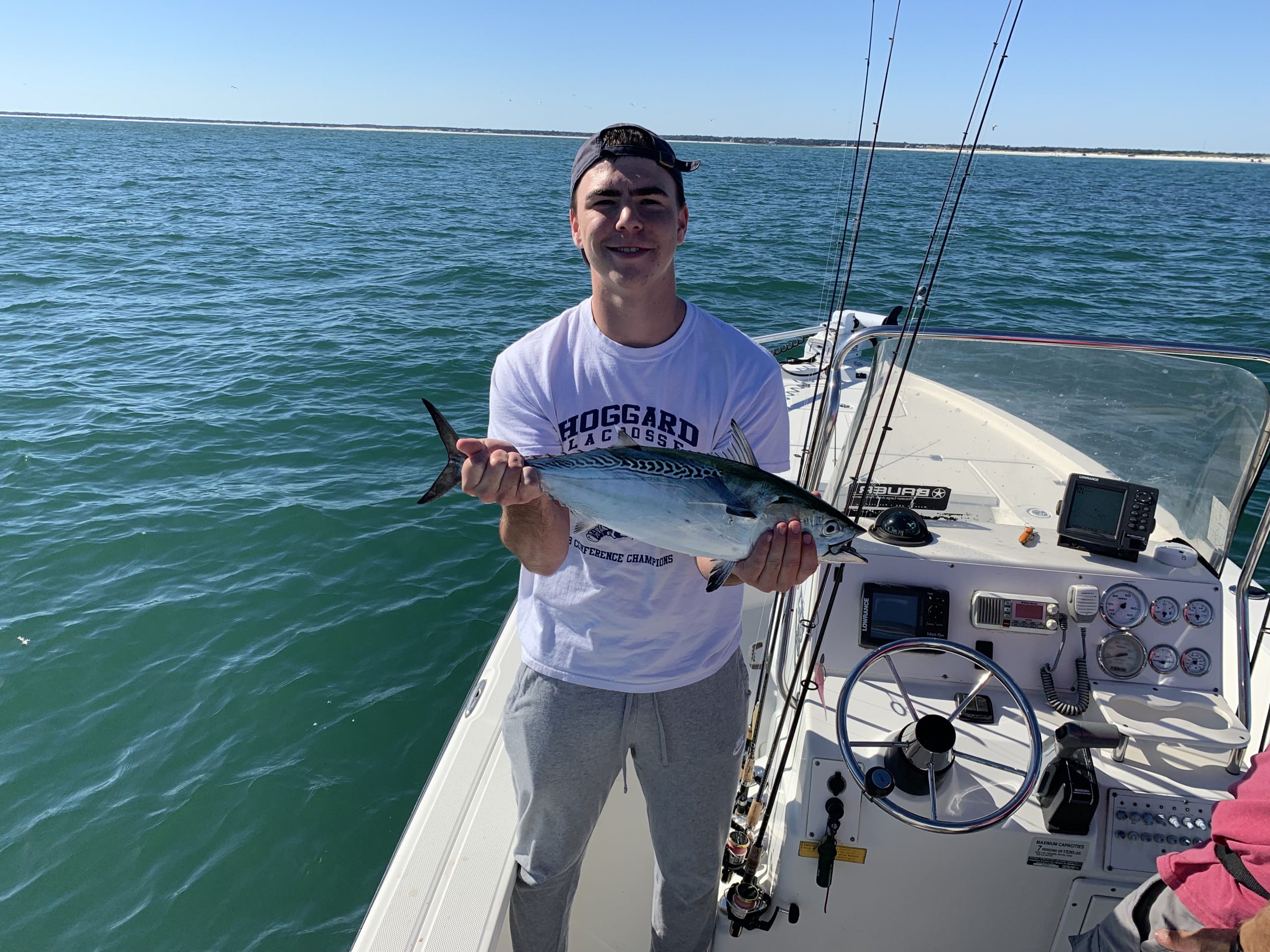 Zachary Coyle, from Wilmington, with a false albacore caught just outside of Rich’s Inlet on a diamond jig.

Mike, of Native Son Guide Service, reports that speckled trout fishing has been good all fall in areas from the inlet up into New River. Anglers are having success with lighter weight (1/8-1/4 oz.) jig heads with soft plastics and MirrOlure MR-17s. Going into winter, look for these trout to stage up in the deeper holes of creeks and areas with slow-moving current.

Black drum are grouped up around oyster beds and docks where fishing shrimp on the bottom will produce some strikes.

Anglers shouldn’t overlook the strong bottom fishing nearshore. The cooling water temperatures push large numbers of black sea bass and grunts around the local structure where they actively feed into the winter months.

Redfish action has started to kick off. The clear waters along the beaches allow for anglers to ride the shoreline and sight cast to large schools of reds staged in the breakers. This tactic is very dependent on finding the right conditions, which are a clear day with light winds and plenty of sun.

Chadwick, of South End Anglers, reports that speckled trout are migrating into the mainland creeks as they slowly move into their winter patterns. Anglers will find plenty of success working live mud minnows and shrimp under floats. The use of light leader lines and slow retrieves are also helpful in having more hookups during this late season period.

Redfish are also moving into the mainland creeks, marinas, canals, and shallow flats that have dark bottom sediment. Anglers are getting strikes while slowly retrieving soft plastics or casting bottom-rigged crab or shrimp. Those anglers choosing artificial Gulp and Z-Man baits will find the use of light jig heads helpful during these cooler months. Don’t shy away from the use of scent products either, as it helps to entice an otherwise slow reaction.

Making the run to nearshore structure will find black sea bass to be the name of the game. This time of year sees the larger sea bass move in close and voraciously feed on any natural baits, especially squid and peeler crabs. Metal jigs will do well for the sea bass action, too. A mix of tautogs, sheepshead, and black drum will all be present on nearshore structure.

Ray, of Spring Tide Guide Service, reports that speckled trout fishing in the area has been good, with anglers focusing in on the pattern changes going into winter. The trout are pushing up into creeks, as both water and air temperatures cool. Correcting your bait retrieve to very slow has helped stay on the action. These trout will stage up in the deeper holes in the backs of creeks where slow (very slow) jigged or dead sticked grubs will entice strikes.

Warmer days will see some groups of speckled trout slide up onto the mud flats where the water temperature will be slightly warmer. Casting suspending and slow sinking MirrOlure MR-17s and 27s are great when targeting these fish.

Jim, of Plan 9 Charters, reports that bottom fishing is great right now. Plenty of large black sea bass, vermilion snapper, and grouper are being caught over ledges and rocks in the 15-30 mile range. These fish are feeding on a variety of cut squid, cigar minnows, and spanish sardines. Some of the larger black sea bass are being caught with jigs.

Grouper keeper season lasts until the end of the year, and anglers picking nice days to go fish will likely find strong action over offshore structure.

Fishing in the ICW should also remain good throughout the winter. A mix of black drum, red drum, and speckled trout are all possible targets.

Robbie, of Jolly Roger Pier, reports that action has started to become more hit or miss with the area’s water temperatures cooling.

Anglers are catching a few blowfish, pinfish, and bluefish with two-hook bottom rigs.

Some sea mullet are a part of the mixed bags. The bite has seemed to be best in the afternoons after a stretch of warm sun hitting the water.

Small runs of speckled trout will be found around the pier through the end of the year, and anglers fishing cut baits will catch skates and some dogfish sharks even longer into the season. 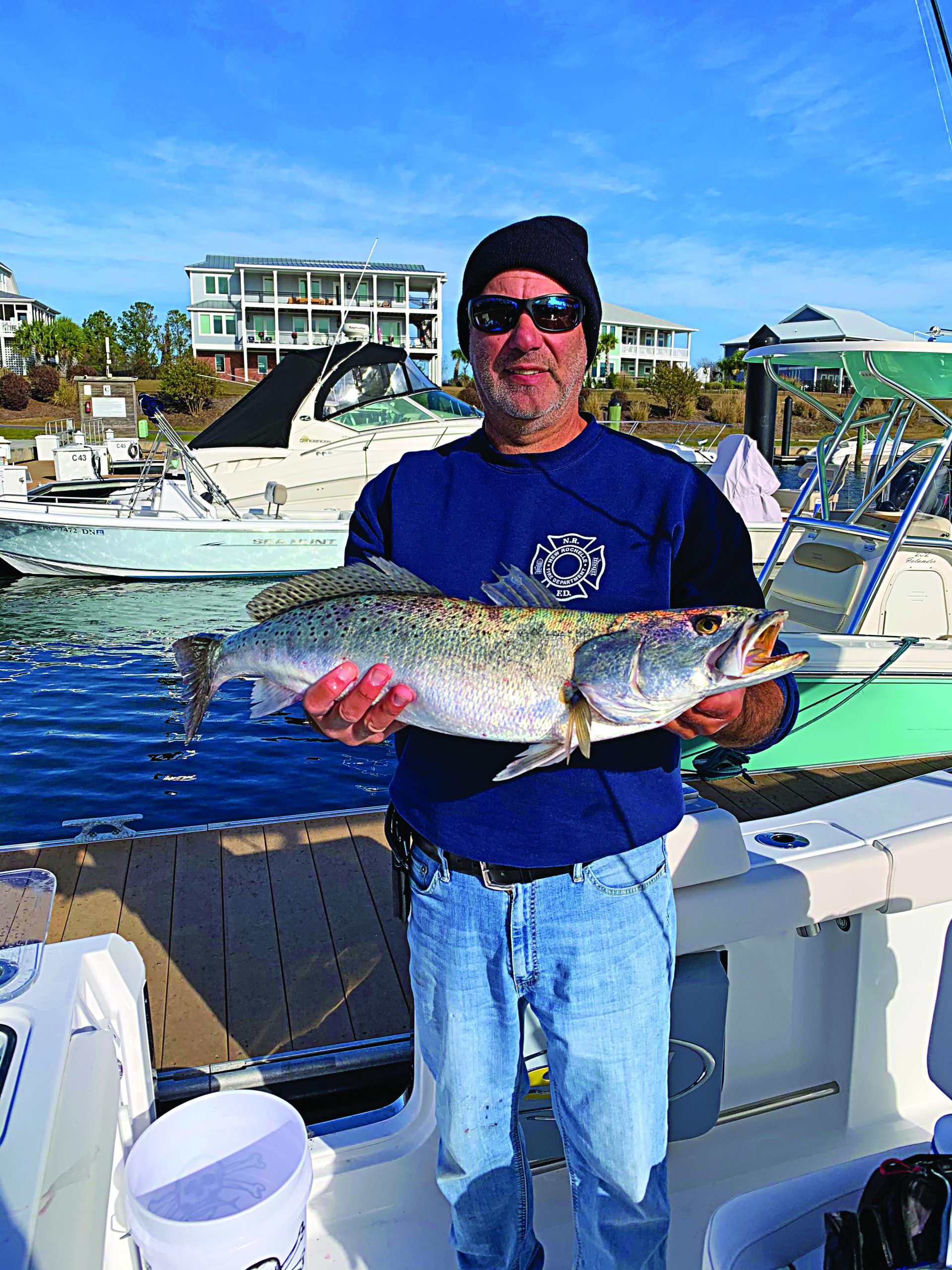 Garrison, of Surf City Pier, reports that cooler water temperatures have anglers focused on bottom fishing. A mix of sea mullet and pufferfish have been feeding (and feeding better during the mild weather stretches).

A few speckled trout are pushed into the surf for anglers fishing both early and late in the day.

Black drum (15” range) are mixed in for those using bait shrimp.

Going into winter, anglers will find some of the best action happening during stretches of warm fronts. Pufferfish, sea mullet, dogfish sharks, and the occasional trout will be in the landings through January.