Those fishing in the sounds are catching good numbers of red drum and speckled trout, and getting on the water early is key during the hot summertime months.

Spanish mackerel action has been solid off the beach for anglers trolling Clarkspoons.

King mackerel (up to 15 lbs.) are being caught in the 8+ mile range over areas of structure, and mahi have moved inshore of the break to around the 20 mile range.

Mike, of Native Son Guide Service, reports that red drum fishing is temporarily scattered with all the wet weather seen in the area. This influx of fresh water tends to throw off the schools a bit as they travel with the bait. Targeting deeper areas is best under these conditions, and finding bait is the most important factor in picking a spot.

Speckled trout are mixed in, though schools are small and that makes the catches inconsistent.

Flounder are hitting baits fished on the bottom and around the inshore ledges.

Nearshore anglers are finding spanish mackerel action to be good from the beaches out to wrecks in the three-mile range. Number 00-sized Clarkspoons pulled behind #1 planers have produced the most strikes.

King mackerel are pushed a little further out, and a couple cobia are being caught around menhaden pods and nearshore structures. 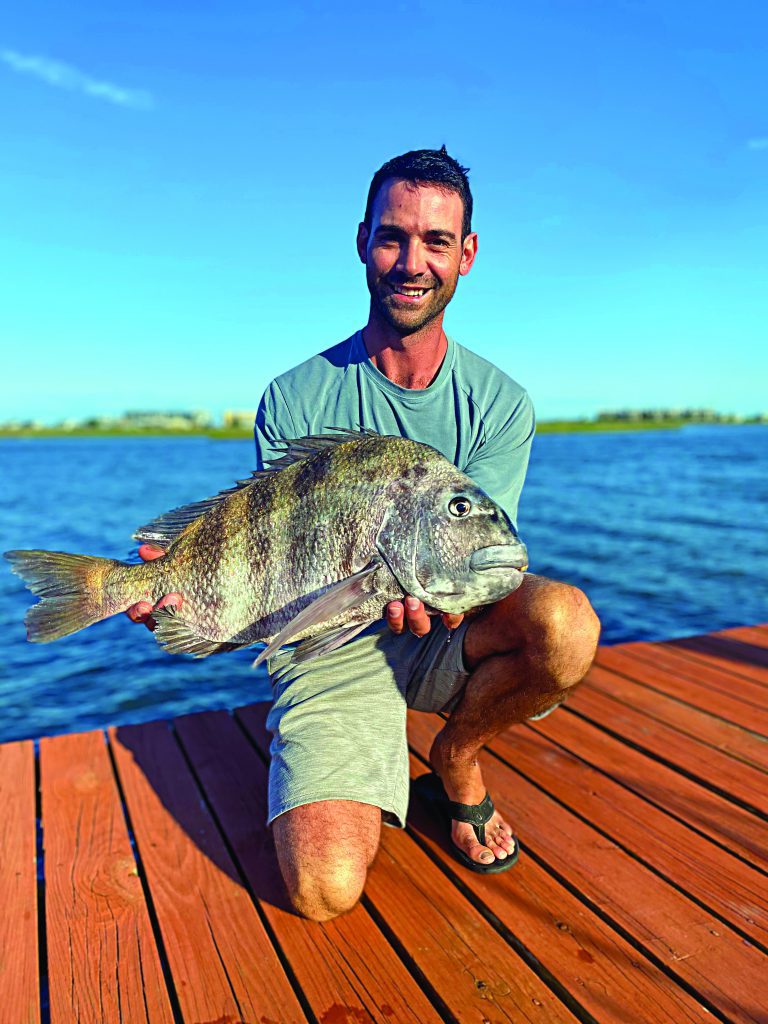 Tim Schneiders, from Wilmington, with an 8 lb. sheepshead that fell for a fiddler crab on a bottom sweeper. He was fishing a dock near Topsail Island.

Chadwick, of South End Anglers, reports that red drum action has been great on topwater plugs, with a variety of MirrOlures, Z-Man Jerk ShadZ, and Yo-Zuri inshore plugs also having success. Anglers looking to fish with baits are doing well with Carolina- or float-rigged live menhaden and pinfish. Target shallow bays, points, oyster beds, docks, and grass lines when searching for groups of fish.

Speckled trout are staged up closer to the area inlets. Rapala Skitterwalks and X-Raps are getting strikes, as well as smaller finger mullet under floats and on lightweight Carolina rigs.

Off the beach, sight fishing for spanish mackerel and bluefish has been successful for anglers casting Hogy Epoxy jigs and Heavy Minnow jigs. Trolling spoons and planers also work well when not finding schools on the surface.

Cobia are being caught around local structure on live menhaden or bluefish.

Ray, of Spring Tide Guide Service, reports that anglers have been doing very well targeting red drum throughout the inshore waters. Topwater action has been great this year compared to past seasons, with Rapala Skitterwalks, MirrOlure topwaters, and Johnson gold spoons all producing strikes.

The marsh areas are holding plenty of fish, with a few large schools hanging around the inlet. During drier conditions and the right tide cycle, fishing in the river has been good, too.

Nearshore anglers are doing well in targeting all of the spanish mackerel holding in the area.

Jim, of Plan 9 Charters, reports that king mackerel fishing has been really good as the schools work their way nearshore. Targeting structure in the 7-15 mile range with slow-trolled cigar minnows, deep diver plugs, and Drone spoons are producing many of the strikes.

Spanish mackerel fishing has been solid with a 14-18” class of fish (and larger ones in the mix). Most of the action has been either around the inlet on a falling tide or along the beaches in 20-30’. The go-to size 0 and 00 Clarkspoons with a pink flash pattern are working when pulled both along the surface and behind #1 planers.

Rigging a large diving plug around these schools of spanish provides the opportunity to hook into one of the scattered cobia or kings hanging around.

Robin, of Jolly Roger Pier, reports that anglers on the planks early are finding good numbers of bluefish and spanish mackerel. There has been a larger class of spanish mackerel around, with fish to 5 lbs. being common. Casting jigs and Gotcha plugs are producing most of the strikes.

Sheepshead (up to 5.5 lbs.) are being caught while fishing baits up against the pilings.

Bottom fishing action has been very good in the evenings, with bloodworms producing catches of spot, sea mullet, and croakers.

Some nights are seeing good numbers of speckled trout running past the pier. 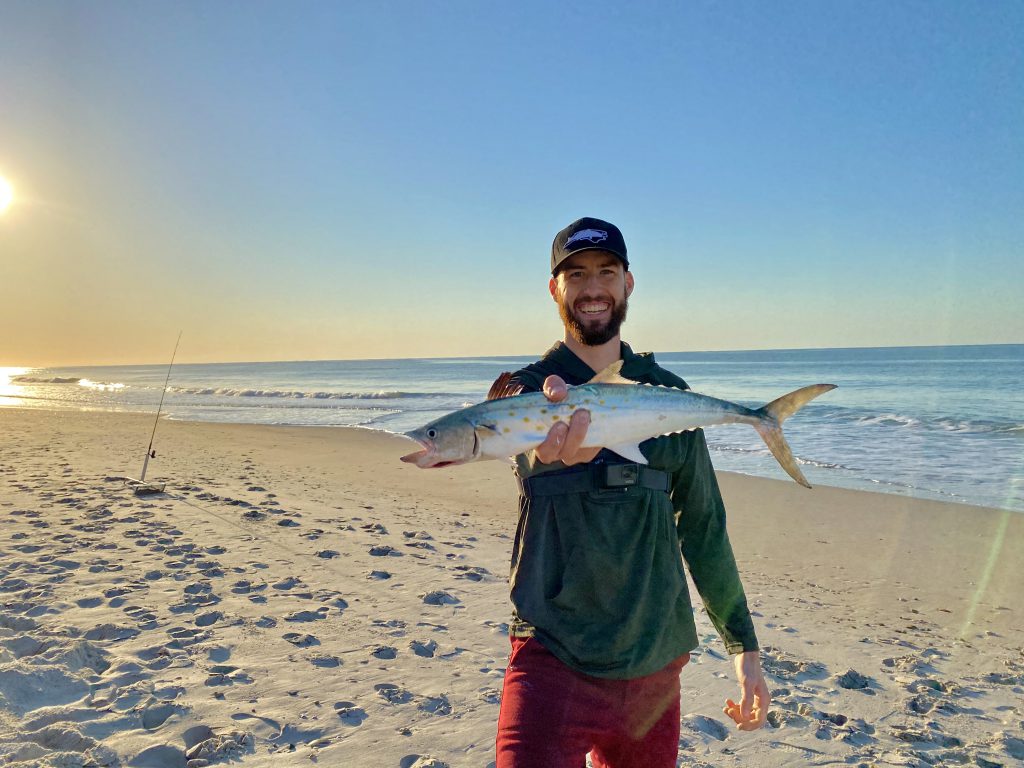 Luke Crocker holds a spanish that hit a Fishbites bloodworm on a single drop rig. He was fishing the surf at North Topsail Beach.

Vinita, of Surf City Pier, reports that anglers live-baiting off the end have been landing king mackerel (up to 34 lbs.).

Bottom-rigged baits are producing spot and sheepshead, and fresh bait shrimp has been best for getting action from some of the black drum (up to 4 lbs.) hanging around.

Keeper-sized speckled trout are mixed in the counts, with most bites coming early and late in the day.

Good-sized spanish mackerel (up to 5 lbs.) are being caught by anglers sight-casting to surface feeding schools.

Tyler, of Seaview Pier, reports that any southwest wind has the fish biting well. Large sea mullet and scattered spot are being caught by anglers with bottom-rigged baits.

Black drum and a few scattered red drum are mixed in, with fresh shrimp working well for both.

Speckled trout are hanging along the beaches, and most of the feeding action has been early morning or in the evening.

Flounder are being caught by anglers fishing live baits.

Though there has been stretches of dirty water, the spanish mackerel and bluefish action is still very good. Anglers are having success with casting both Gotcha plugs and diamond jigs.