Jerry, of East Coast Sports, reports that pretty good numbers of flounder are starting to show up inshore, and speckled trout action has been on fire for anglers fishing topwater plugs.

With more bait arriving inshore, the red drum have begun to transition into areas along the ICW.

Trolling action for spanish mackerel off the beach has been great, and some schools of bluefish are mixed in these shallower ocean waters.

Scattered cobia are being spotted around nearshore reefs and bait balls.

King mackerel are working their way in, holding anywhere from 5-12 miles.

Grouper are staged over structure in the 120-140’ depth range. 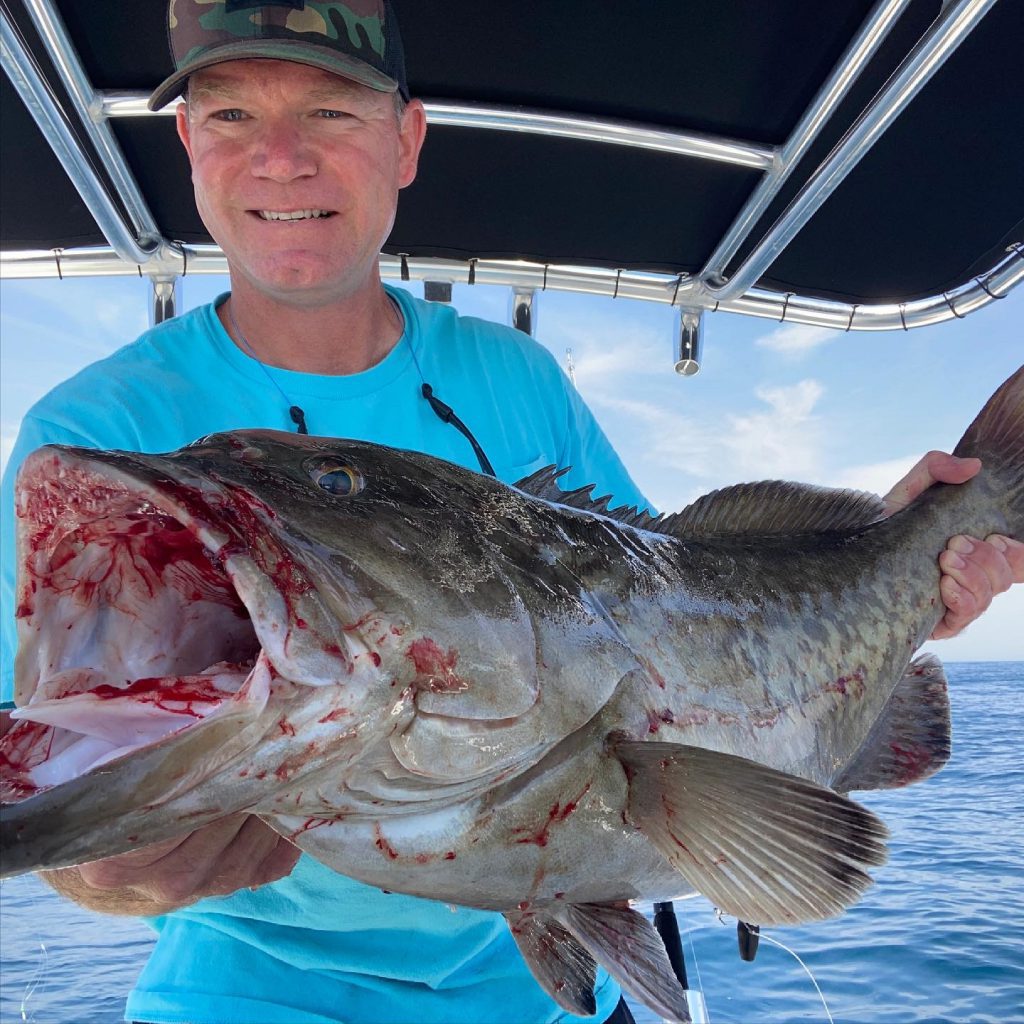 Patrick Long, of Hampstead, with a 19.25 lb. gag grouper that was caught using a cigar minnow in 85′ of water off Topsail Island.

Mike, of Native Son Guide Service, reports that there are good numbers of larger spanish mackerel feeding off the beach.

Some schoolie-sized king mackerel are working nearshore and are mixed around from the beachfront out to nearshore structure.

Inshore anglers have found red drum fishing to be very good. Recent trips are even seeing larger, quality fish more than just high numbers. Topwater plugs (such as the MirrOlure Top Pup) and soft plastics are both getting strikes.

Chadwick, of South End Anglers, reports that with bait now becoming more plentiful inshore, anglers have been experiencing strong red drum fishing. Topwater action has been very good for those out on the water both early and late in the day. Natural baits (live and cut pogies) work well when conditions don’t allow for topwater successes.

Flounder have started to move inshore and are being caught with live pogies. Z-Man soft plastics on Fathom Inshore jig heads are a great option for anglers looking to fish artificial baits and scout new areas.

Nearshore trips are catching plenty of spanish mackerel off the beaches. When sight-casting to surface-feeding fish, Hogy Heavy Minnow jigs have been driving the frenzied schools crazy.

Ray, of Spring Tide Guide Service, reports that there are plenty of spanish mackerel off the beach hitting trolled Clarkspoons. Top producing color patterns have been gold or silver in dirty water and pink or green in clear waters.

Redfish action has really picked up inshore from the areas behind Topsail Island back into the river. Topwater plugs have been doing great, with anglers also having success with Saltwater Assassin and similar soft plastics.

Some nice-sized speckled trout (up to 5 lbs.) are hitting topwater plugs, MirrOlures, and soft plastics.

Jim, of Plan 9 Charters, reports that spanish mackerel action is going steady from around the inlets and up along the beachfronts. Clarkspoons under planers have been the best bet for strikes.

King mackerel have shown up in good numbers through the 5-10 mile range. Yo-Zuri deep divers and Drone spoons under planers are both getting strikes.

Bottom fishing has been phenomenal, with plenty of large sea bass, beeliners, and some gag grouper caught in the 15-20 mile range. Both cut minnows and squid have been working great.

John, of One More Cast Fishing Adventures, reports that the bite at the break is heating up. Anglers are targeting weed lines and floating debris for mahi. Tuna and a few wahoo are mixed in the trolling action. Skirted ballyhoo rigs with 7/0 or 8/0 J-hooks are doing the trick.

Menhaden are starting to move up and down the beaches, and some cobia will be mixed in with them. Live bait is best when available, with bucktails also being effective. Targeting structure (whether floating or on the bottom) is recommended because it helps keep the fish around.

King mackerel are being caught by anglers slow-trolling live baits. If not available, dead baits will get strikes as well. 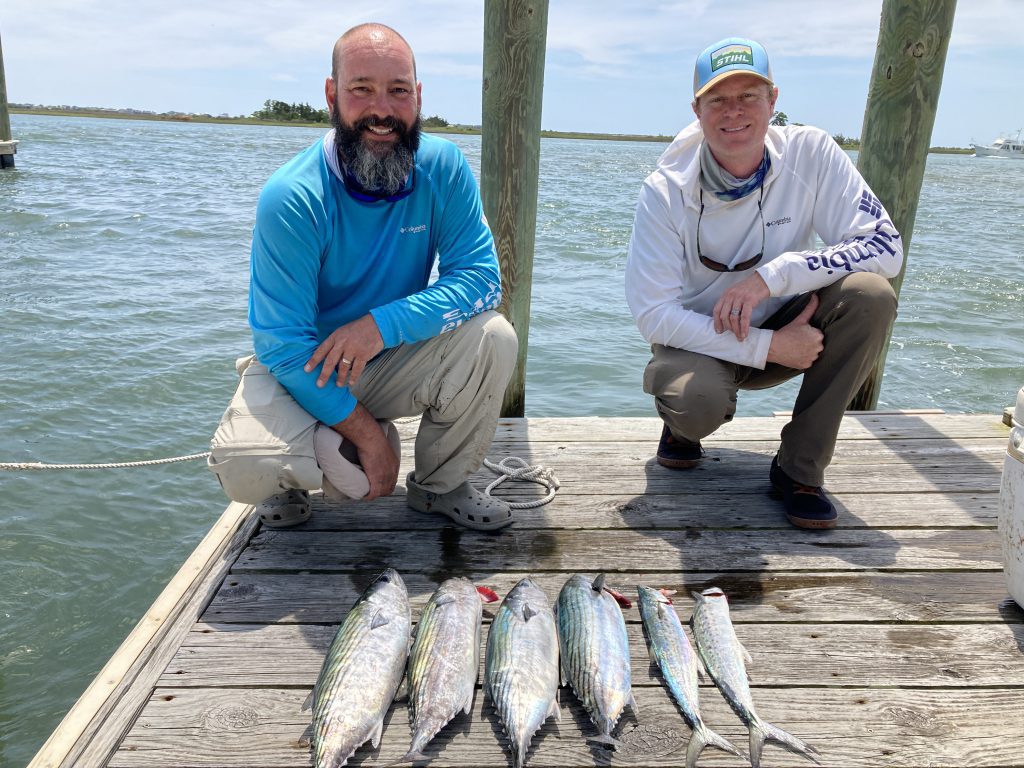 Matt Cave and Todd Richardson with several bonito and spanish that were hooked on metal jigs while fishing the nearshore reef out of Topsail Inlet.

Robbie, of Jolly Roger Pier, reports that spanish mackerel action has been good both early and late in the day.

A few blues are mixed in the daily counts.

Vinita, of Surf City Pier, reports that anglers are still catching the occasional speckled trout from behind the breakers.

Pompano (up to 1.5 lbs.) have started to show up for bottom fishing anglers.

Some good-sized black drum are feeding on fresh bait shrimp.

Spanish mackerel and bluefish are being caught off the end of the pier.

Tyler, of Seaview Pier, reports that bottom fishing has been producing sea mullet and pompano (up to 2.5 lbs.).

A few speckled trout are being caught with shrimp.

Spanish mackerel (up to 6 lbs.) and bluefish are being caught with casting jigs.