Jerry, of East Coast Sports, reports that bonito are hanging around just off the beaches and striking Beach Bum or similar casting jigs on the surface.

Schools of spanish mackerel are mixed in along the beaches, and they should get even more plentiful as water temperatures continue to rise.

Bluefish are being caught around the inlets as they feed on incoming bait schools.

King mackerel (up to 12 lbs.) are holding in the 20-mile range. They’re waiting for beachfront water temperatures to rise before moving in.

Speckled trout has action has been steady, and with the back water temperatures rising come the success of topwater plugs.

Mike, of Native Son Guide Service, reports that nearshore fishing has been great in the 30-50’ range. Schools of bonito, false albacore, spanish mackerel, and schoolie-sized king mackerel are working the bait as it pushes closer to the beach. Trolling #00 Clarkspoons behind #1 sized planers has been the best tactic so far with both numbers and size. There are some fish working along the surface for anglers casting smaller jigs, but not as commonly as in years past.

Dropping bait around nearshore structures has been producing plenty of both keeper and throw-back black sea bass.

Inshore anglers are doing very well on red drum. These fish are in a transition where they break up out of their large winter schools and spread out through the waterways. It has been most productive to cover plenty of water and really focus on areas holding bait.

Speckled trout are holding in many of these same areas, though there hasn’t seemed to be any consistency to the size of fish being caught.

Some bluefish have worked their way inshore.

Ray, of Spring Tide Guide Service, reports that speckled trout action has been good in the river even with the fish still transitioning out of cold season patterns. Anglers are having success with both topwater plugs and sub-surface MirrOlure MR-17s. With the water temperatures warming over the next few weeks, look for these schools to be pushing into the main river and getting more active in their feeding.

Redfish action has also been good in the river, with the fish pushed out of creeks and feeding along the river shoreline. Both topwater plugs and gold spoons have been getting strikes. Going into the next few weeks, anglers will also begin to have a lot of red drum successes while fishing the marshes and channels behind Topsail Island.

Nearshore fishing has kicked off with a good mix of smaller kings, spanish mackerel, bonito, and false albacore being caught from the beachfronts out to nearshore reefs. As more bait filters into the area, look for even more action over the next few weeks.

Jim, of Plan 9 Charters, reports that nearshore action has been good, with plenty of bonito and false albacore hanging in the area.

Schools of spanish mackerel and bluefish are holding from the beachfronts out to three miles. This first wave of fish has seen some large spanish mixed in.

Some king mackerel should be holding in the 23-mile range. Dragging spoons and Sea Witch rigged dead baits will produce some good strikes. The key with these early schools is to fish the baits deep.

John, of One More Cast Fishing Adventures, reports that nearshore anglers are having some great trolling success with smaller spoons. A mix of bonito, spanish mackerel, and smaller kings are holding from the beachfronts out to 5+ miles.

Larger king mackerel are working their way inshore and are becoming more common as bait moves into the area.

Grouper season opens up May 1, but many of the quality fish will be holding way offshore.

Anglers are eagerly looking forward to the strong mahi action coming over the next month or so. Keep an eye on reports from the southern areas of Carolina for an idea of when to catch the migrating schools. 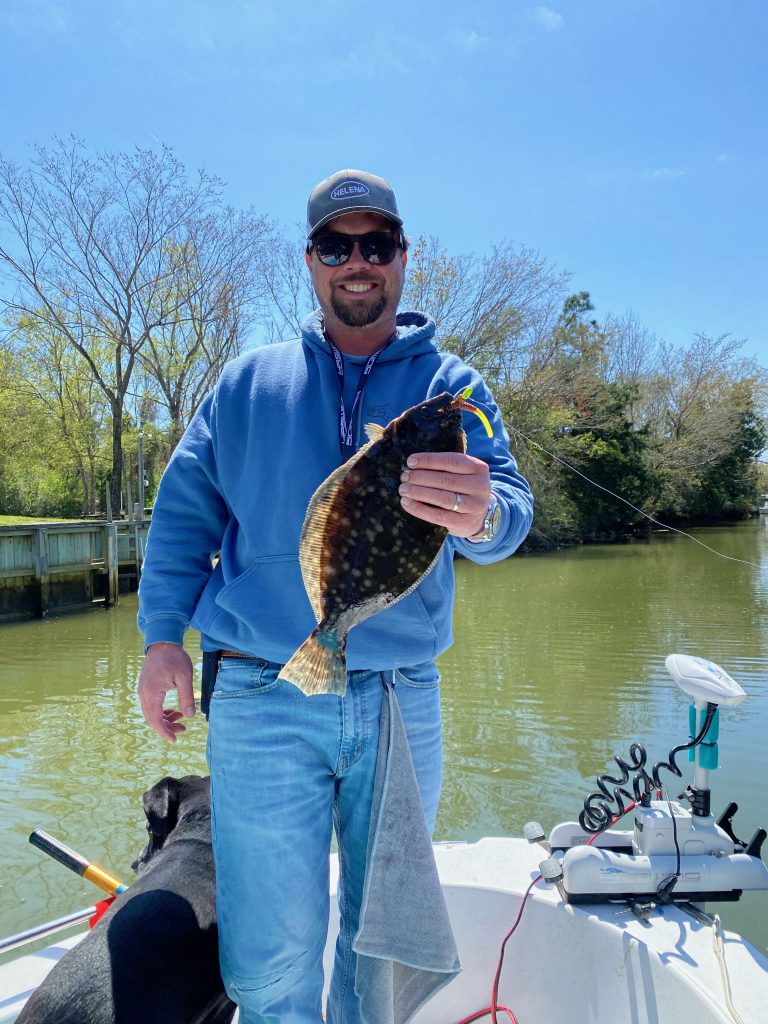 Elliot Morton with an 18″ flounder that was caught (and released) on a chartreuse Trout Trick with Pro-Cure added. He was fishing a creek behind Topsail Island.

Robin, of Jolly Roger Pier, reports that bonito and false albacore fishing has been good now that water temperatures have pushed the bait onto the beaches. These schools have been popping up and moving through the area quickly. Afternoon anglers have been seeing a majority of the action.

Schools of bluefish and spanish mackerel have been mixed in on the surface-feeding action. As the water temperatures warm, both species get more plentiful.

Virginia mullet action has been really good over the past few weeks, and a few black drum and puppy drum are mixed in the bottom fishing action. They’re all feeding on shrimp.

Also, the first few pompano (up to 1.5 lbs.) of the year have begun to arrive.

Scattered in the counts are pufferfish and catch/release flounder.

Gaylon, of Surf City Pier, reports that a good number of bonito have been feeding on bait schools around the pier. Spanish mackerel and bluefish have also moved in and are feeding on bait balls pushed along the beaches.

Bottom rigs with shrimp have been landing pompano and sea mullet. The mullet action has mostly been better in both the morning and evening hours. A few black drum and sheepshead are also being caught on fresh bait shrimp.

Heather, of Seaview Pier, reports that sea mullet have been pretty thick for anglers looking to do some bottom fishing.

Spanish mackerel arrived this past week, and as more bait moves onto the beaches, look for the numbers to keep going up. Schools of bluefish and bonito are mixed in around the spanish. All three species are hitting casting jigs.