Don, of East Coast Sports, reports that anglers fishing on the pier and in the surf zone have found some active red drum feeding on all the bait around.

Out on the local piers especially, bottom fishing anglers are catching sea mullet and some spot.

Spanish mackerel fishing has been great for nearshore anglers. There are some larger fish mixed in with all the schools tearing up baits off the beach.

King mackerel fishing has been steady. Many of the biggest fish are being caught out in the 20-mile range, but there are still plenty of quality fish closer to the beaches as well. The closer kings just seem to be more scattered. 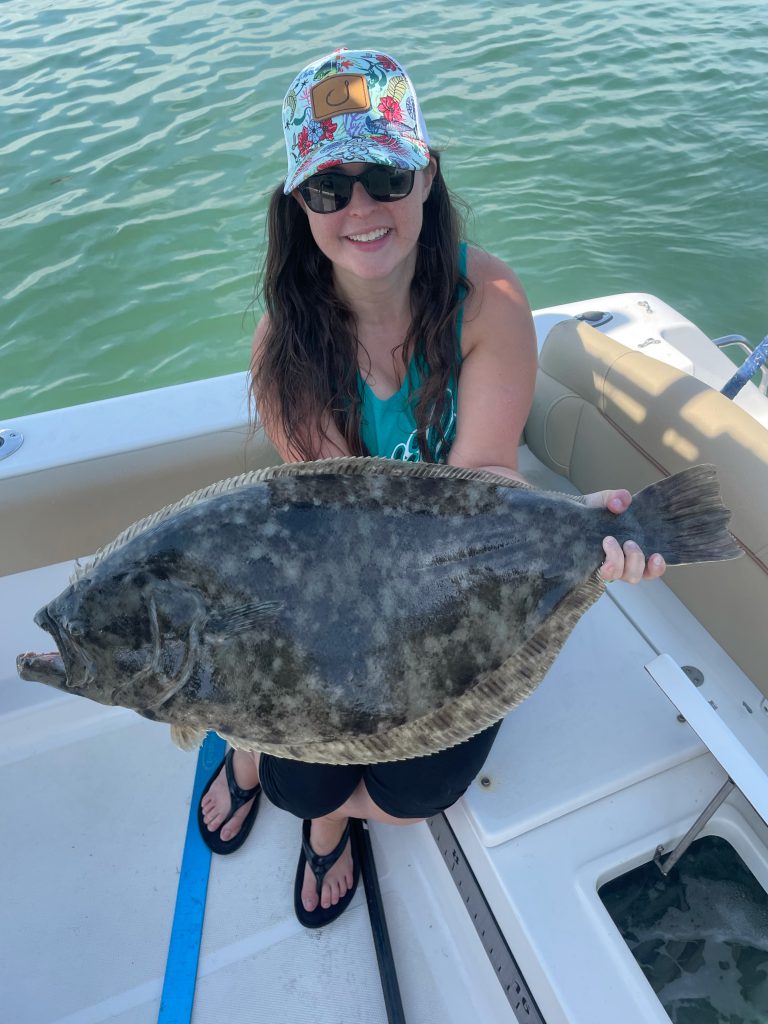 Dara Shelley, from Winnabow, with a 30″ flounder that hit a live mullet on a jig head. She was fishing in the Topsail area.

Mike, of Native Son Guide Service, reports that nearshore waters haven’t really begun to cool yet, and this has the spanish action still fired up. Schools of good-sized spanish mackerel (3-5 lbs.) are being caught by anglers casting jigs at the surface-feeding frenzies.

Some hard fighting false albacore are mixed in along the beaches and out a few miles. With water temperatures where they are, anglers anticipate seeing these schools around for another couple weeks. The key with false albacore is to not run up onto the fish. Cut off a way back and either troll or drift into the feeding pattern. These schools are very prone to getting spooked.

Inshore anglers have found the red drum action to be spectacular and only getting better as water temperatures cool. These reds are migrating from the ICW into mainland creeks and onto marsh flats.

Speckled trout fishing has been overall hit or miss. For the more consistent bite, anglers are waiting for water temperatures to fall into the low 70s and upper 60s. Based on the spring action, there should be a great fall bite, but these trout wait for and feed best around cold fronts this time of year.

Ray, of Spring Tide Guide Service, reports that nearshore anglers have been pleased with the non-stop casting action on schools of large spanish mackerel.

Inshore red drum fishing has been great all year, and that strong bite remains. Many of these fish are tucked away in marsh flats and channels behind the barrier islands tearing up baits as they migrate towards the inlets. Both topwater plugs and cut baits are getting strikes from the redfish.

A few speckled trout are starting to show up as we get into late fall. Look for the trout action to make a significant jump as water temperatures cool to match typical November conditions.

Chadwick, of South End Anglers, reports that red drum fishing has been good inshore for anglers working a variety of topwater plugs, Z-Man soft plastics, and live or cut mullet.

Some large trophy red drum are staged on nearshore structures. Live mullet, jigs, and cut bait are all being used to target these migrating reds.

Speckled trout fishing has been picking up as we move into late fall. A wide mix of lures are getting strikes, from topwater Zara Spooks to the tried-and-true live shrimp, MirrOlures, and Z-Man soft plastics.

Gray trout are being caught over nearshore structure, and anglers are having success with metal jigs and squid.

Lots of blacktip sharks are behind the shrimp boats and out along the beach. Cut baits, Halco poppers, and Z-Man HeroZ are all getting attention from the sharks.

Jim, of Plan 9 Charters, reports that king mackerel fishing has been great. These schools have been actively feeding from the beach out to 10 miles. There are also some of the larger-sized, fall kings mixed in with the upper-schoolie sized fish. Slow trolled live and dead baits have been producing the best action.

False albacore and big spanish mackerel are mixed in with the kings from areas right outside the inlets and along the beaches. Anglers trolling the larger Clarkspoons are having success, but be sure to be rigged up with small, shiny Shore lures or diamond jigs for when finding a school busting on bait.

Bottom fishing has been heating up in the 70-90’ range. Big black sea bass, gray snapper, and grouper are all falling for cut bait. Fishing the structure further offshore is producing more grouper and keeper sea bass. 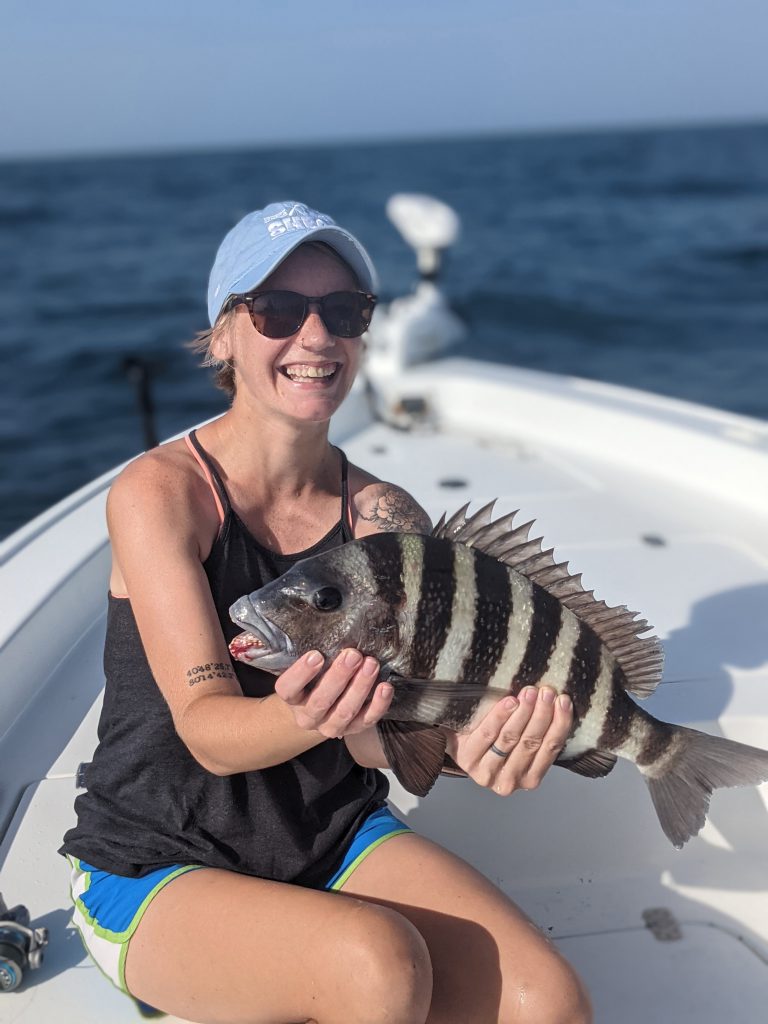 Karen Parker with a sheepshead that fell for a diamond jig tipped with squid. She was fishing offshore of Topsail Island with Capt. Mike Oppegaard of Native Son Guide Service.

Robin, of Jolly Roger Pier, reports that king mackerel (to 26 lbs.) have been running by the pier for anglers fishing live baits.

There are good numbers of spanish mackerel around for anglers doing some sight casting, with plenty of large fish in the mix. Bluefish are mixed in with the casting action.

Anglers getting on the planks in the early morning have landed some nice trout (to 6 lbs.).

Bottom fishing has been best for anglers coming out in the evenings. A mixed bag of croakers, good-sized pompano, and some spots are all being landed.

Vinita, of Surf City Pier, reports that bottom fishing has been producing some good-sized pompano (to 2+ lbs.). A few Virginia mullet are mixed in with the bottom action.

Some speckled trout are being caught very early (before the sun breaks).

Schools of spanish mackerel have been pushing by the pier all day for anglers casting diamond jigs around the bait balls, and anglers fishing live baits off the end have been catching some large king mackerel (to 39 lbs.).

Tyler, of Seaview Pier, reports that anglers fishing live baits off the end have been catching king mackerel and some huge spanish mackerel (to 8 lbs.).

There have been plenty of bluefish and spanish mackerel for anglers casting jigs around fish breaking on bait balls, and bottom fishing has been producing good action on pompano, sea mullet, and some spots.