Jerry, of East Coast Sports, reports that redfish action has been picking up now that inshore water temperatures are cooling off. The annual mullet run has started, and the mass amounts of bait around have the reds actively feeding just about everywhere.

Flounder fishing both inside and off the beach was outstanding for flounder season, and anglers fishing live baits inshore for drum are still landing some flatfish.

Surf anglers are catching nice-sized red drum on cut and live mullet, and bottom rigs in the deeper holes are producing sea mullet, pompano, and scattered numbers of spot.

Nearshore anglers are finding spanish mackerel and bluefish action to be good, with schools now pushed up on the beaches. Most are being caught with casting jigs, as the fish are actively feeding on bait pods pushing out of the inlets.

King mackerel action is scattered nearshore, with most action in the 5+ mile range.

Offshore trolling trips have been producing wahoo and sailfish, and bottom fishing the deep structures (in the 15+ mile range) has been seeing grouper, large triggerfish, and phenomenal numbers of beeliners. 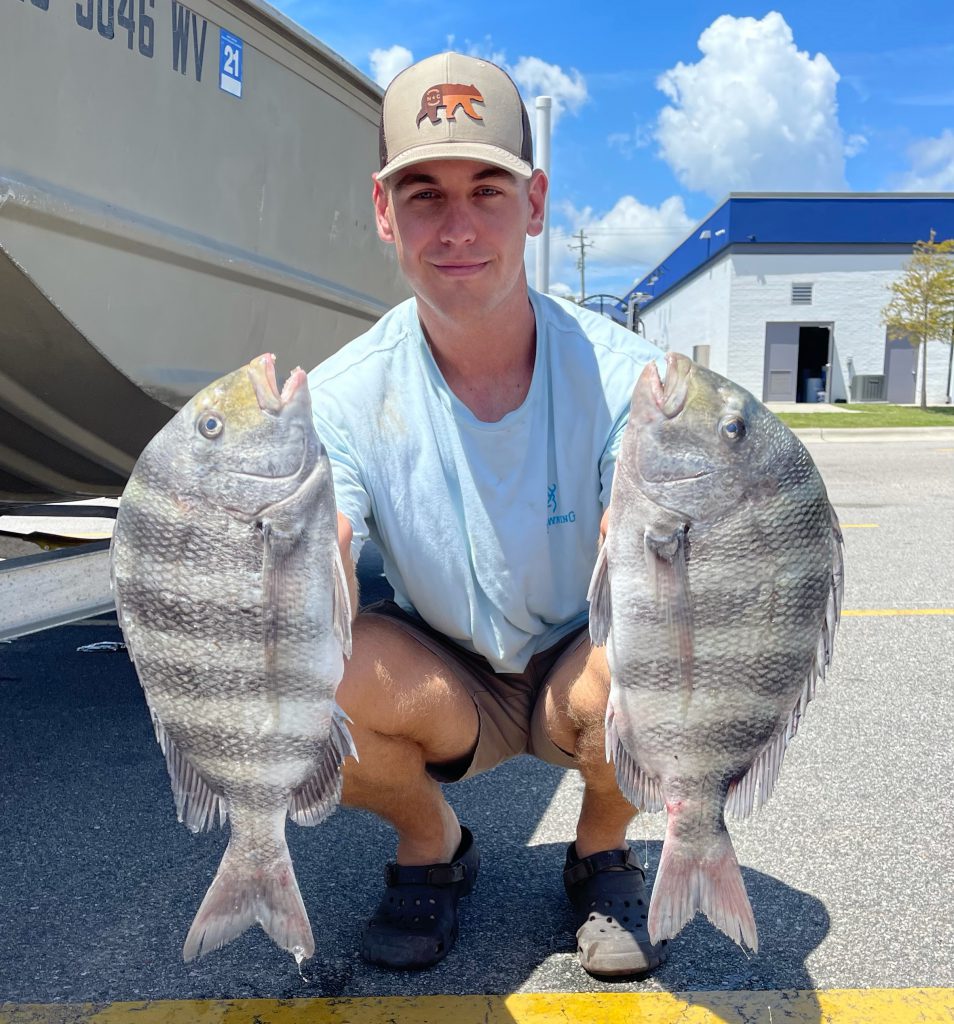 Evan Blanton, of Wilmington, caught this pair of sheepshead using fiddler crabs while fishing in the Topsail Island area.

Mike, of Native Son Guide Service, reports that red drum fishing has been outstanding. The bait moving around the inshore waters has the drum feeding just about everywhere. Fishing live baits has been very productive, but at times artificial baits have been the better choice. Casting topwater plugs and soft plastics helps anglers in scouting new spots quicker and allowing for more productive fishing time. Larger (5-6”) Z-Man PaddlerZ or jerk shads have both been great when rigged on 1/8 oz. jig heads. For topwater plugs, both MirrOlure She Pups and Top Pups are producing strikes.

Some speckled trout are starting to show up, especially in the deeper holes around the inlet. Areas with moving water fished in the early mornings has been best.

Nearshore fishing has also picked up a lot. A larger class of spanish mackerel has begun to filter in, and they’re mixing in with schools of false albacore. Both of these larger species give great battles to anglers casting jigs at the surface-feeding frenzies. Look for this action to get even better as more schools push onto the beaches over the next month.

Bottom fishing at the nearshore reefs has produced plenty of action on good-sized black sea bass.

Chadwick, of South End Anglers, reports that red drum fishing has been excellent throughout the marshes. The fish are being caught from back in the shallow bays all the way out along the grass lines towards area inlets. The mullet run is underway, and the redfish are taking full advantage. Live finger mullet on Carolina rigs and under floats are working well. Topwater plugs are also successful for anglers fishing in the mornings and on cloudy days. Switching over to soft plastic Z-Man JerkshadZ and DieZel MinnowZ rigged Texas style or on jig heads is a good bet throughout the day.

The resident speckled trout are enjoying the cooler water temperatures. They are keying in on topwater plugs early and late in the day. Popping corks rigged with live and artificial shrimp will entice strikes, too. If the conditions continue on the current track, we could see our annual speckled trout run a little earlier than previous years. Look for the fish to show up first in the creeks closest to the inlets.

Nearshore fishing has been quite productive. Large red drum are being caught along the beaches, jetties, and nearshore structure. Cut mullet, menhaden, metal jigs, and bucktails all have their place when targeting these fish.

Grouper, pinkies, grunts, sea bass, and triggerfish are accounting for the bulk of the action from anglers running out to bottom fish. Frozen minnows, squid, and Blue Water Candy Roscoe jigs are all getting action from the bottom species.

Trolling for spanish mackerel has been very good. Spoons behind planers have produced most of the action. There has been a lot of short fish around, but the bite has been hot.

Jim, of Plan 9 Charters, reports that spanish mackerel fishing has been good and getting better with all the bait pushed along the beachfronts. It has been a class of 16-18” fish being caught while both trolling Clarkspoons and casting jigs at breaking fish.

Some schools of false albacore are mixed in nearshore.

Further off the beach, bottom fishing is strong in the 80-100’ range. A mixed bag of grouper, snapper, and good-sized black sea bass are all feeding on cut baits.

King mackerel fishing is steady in the 50’ range, as action starts to ramp up with seasonal changes. Trolling both Drone spoons and dead cigar minnows are getting strikes. 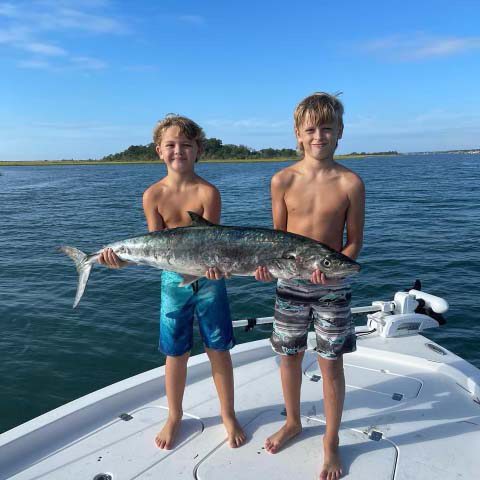 Travis Brotherton and Mason Braton (both age 9) caught this 35 lb. king on a Blue Water Candy king rig with a cigar minnow. They were fishing near Topsail Inlet.

Robbie, of Jolly Roger Pier, reports that a few nice-sized spanish mackerel are being caught by anglers plugging around bait balls.

Some bluefish are mixed in with this sight-casting action now that bait along the beaches has both these species in feeding frenzies.

Anglers king fishing are finding the bite a bit slow, but they look forward to October as the schools move onto the beaches.

Bottom fishing has been producing croakers and nice-sized sea mullet in the evenings, and slot-sized red drum are being caught on Carolina-rigged mullet.

Gaylon, of Surf City Pier, reports that a mixed bag of sea mullet, croakers, and a few spots are all being caught with some consistency.

Though keeper season has ended, there are still several nice-sized flounder being caught.

A mix of red and black drum are both showing up, especially on days where the water is churned up a bit.

Anglers fishing live baits off the end are catching a few king mackerel as the fish work their way onto the beaches.

Tim, of Seaview Pier, reports that anglers fishing at night have been landing a few trophy drum on fresh cut baits off the pier’s end.

The ribbonfish and scattered spanish mackerel action has been good now that bait is coming down the beach.

As long as the forecast includes lighter winds, the king mackerel fishing should get really good.