Gavin, of East Coast Sports, reports that inshore anglers have been catching good numbers of slot red drum and flounder in marsh channels or around ICW docks. A few speckled trout are around in deeper channels just off the marsh.

Spanish mackerel action has been steady off the beaches. Most of the schools have been holding in a bit deeper waters (to 40’) during the times of hot water temperatures.

The nearshore ARs are loaded with black sea bass and some flounder mixed in. Anglers can best find some flatfish with Carolina-rigged live baits.

Anglers in the 20-mile range are catching some good-sized king mackerel and scattered dolphin.

The surf zone is finding that bottom fishing is the most productive on these hot, flatwater days. Again, it is a good idea to get out early or late rather than the middle of the day. Tide cycles do matter, but the sun still will push fish into deeper holes and keep even the bait schools holding deeper. 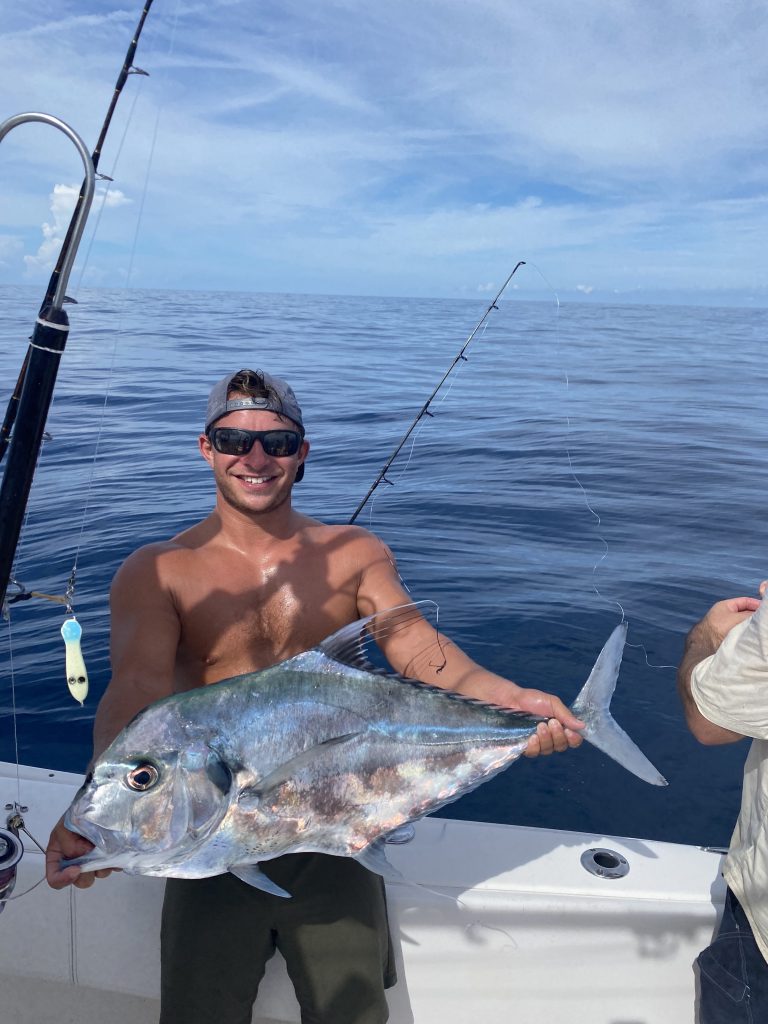 Ryan Maddox, from Raleigh, with an African pompano that was caught on a Blue Water Candy roscoe jig. He was fishing offshore of Topsail Island.

Ray, of Spring Tide Guide Service, reports that red drum have been thick throughout the inshore waters. Plenty of over-slot fish are mixed in the action, with location not being the biggest factor. Bait is scattered everywhere, as well as the groups of redfish. Try topwater plugs early (or gold spoons if conditions call for it), and then switch over to Carolina-rigged mullet or menhaden once the sun is higher and the heat sets in.

Speckled trout have been steadily mixed in all summer long. Live baits fished in channels behind the barrier islands down to Figure Eight have been producing strikes.

Off the beach, spanish mackerel fishing has been hit or miss, with most action on larger fish (3+ lbs.) out in the 50’ range. Schools of false albacore are popping up in these same areas for anglers casting glass minnow jigs.

Some scattered cobia are holding on the nearshore wrecks.

Anglers looking to flounder fish can find action both inshore and out at nearshore structure. Live baits work great for the flatfish, with bucktail jigs paired with Z-Man soft plastic trailers also being very successful.

Jim, of Plan 9 Charters, reports that king mackerel fishing has been good in the 5-10 mile range. Slow trolling dead cigar minnows has been producing most of the big strikes.

Spanish mackerel fishing has begun to pick back up, with a nice run of schools found from the inlets (especially on outgoing tides) out to 30’ of water. The go-to Clarkspoons in #0 and #00 sizes behind a #1 planer or trolling weight will out produce most other methods.

Bottom fishing remains strong in the 70-80’ depth range. A mixed bag of grouper, big beeliners, black sea bass, and snapper are feeding on cut squid and minnows. Jigs are also producing a few bites when the bottom fish are extremely active.

Robin, of Jolly Roger Pier, reports that the spanish mackerel and bluefish action has been good with bait pushed up along the beaches. Anglers rigged with Gotcha plugs or diamond jigs are doing well when casting at the surface-feeding frenzies.

Some good-sized king mackerel (to 27 lbs.) are being caught with live baits fished off the end.

Bottom fishing has been producing a mixed bag of croakers, black drum, and spot. 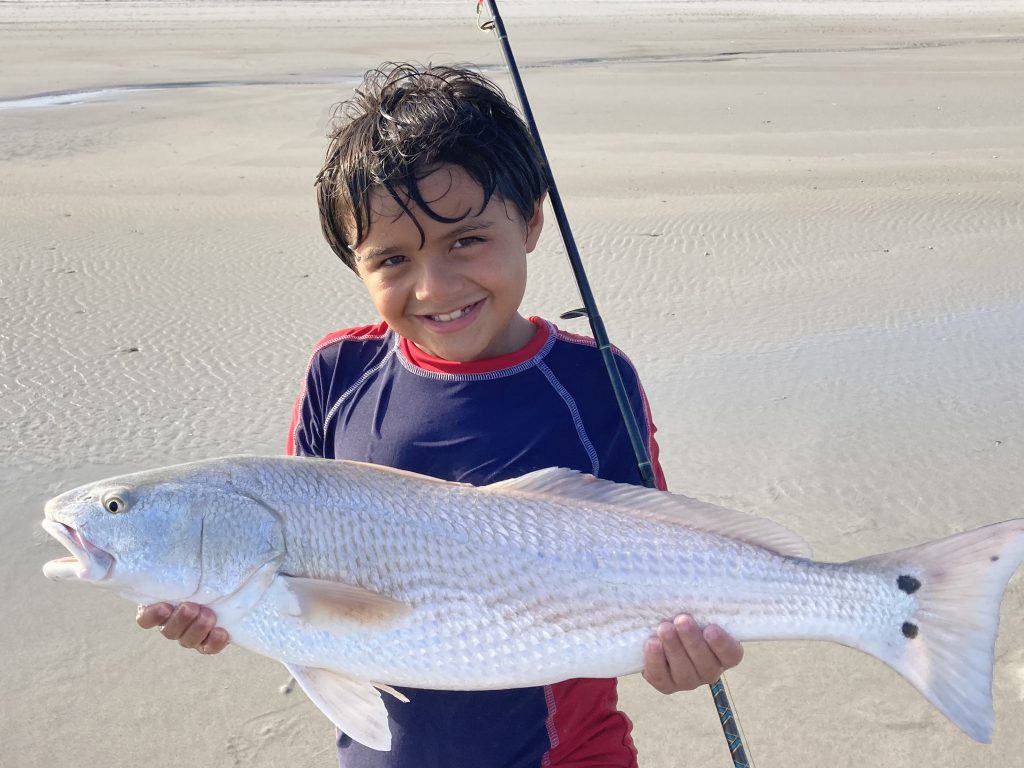 Max Styons with a 31″ red drum that fell for a dead finger mullet on a falling tide. He was fishing in the surf on Lea Island.

Vinita, of Surf City Pier, reports that a few speckled trout (to 5 lbs.) are being caught with live shrimp in the morning.

Anglers fishing live baits on pin rigs have been landing some large king mackerel (to 35 lbs.).

Anglers fishing baits up against the pilings have weighed some good-sized sheepshead (to 3.5 lbs.), and bottom fishing in holes near the breakers is producing some pompano and flounder.

Tyler, of Seaview Pier, reports that good numbers of ribbonfish have shown up for anglers fishing cut baits, and scattered red drum are mixed in the action when using Carolina-rigged cut mullet.

A few speckled trout are being landed during the cooler morning and evening hours, and fresh shrimp has been producing keeper black drum.

Spanish mackerel and bluefish are hitting both Gotcha plugs and diamond jigs.