Matt, of Tex’s Tackle, reports that red and black drum have been more active and easier to catch with the warmer temperatures. Shrimp and mud minnows are still the best options for now; however, Gulp and Z-Man soft plastics fished slowly are getting strikes as well. Look for both species to be hanging around docks or oyster bars back in the marshes and mainland creeks.

Speckled trout fishing has been improving, with some nice-sized fish being caught. MirrOlure MR-17 and light-weight soft plastics have been getting most of the strikes.

Anglers fishing around the jetties are catching sheepshead and black drum.

Bluefish have been found a few miles off the beach, and they should push inshore any day now.

Surf fishing has been relatively slow except for some slot-sized redfish, speckled trout, sea mullet, pufferfish, and croakers. April should bring in some bluefish (large and small) and some more red and black drum.

False albacore have shown up in the 3-10 mile range. There is a lot of bait along the beaches, and anglers look forward to water temperatures the 60s for everything to get going.

Atlantic bonito and bluefish will be mixed in over the next couple weeks. Casting jigs will be best when finding surface-feeding schools. When not easily spotted, it helps to troll deep diver plugs and Clarkspoons, or try vertical jigging over marked bait.

Further offshore, keeper black sea bass are stacked up out in the 80’ range, along with beeliners, grunts, and porgies.

King mackerel are holding out in the 20-30 mile range.

Trolling in the Gulf Stream has been sporadic. April isn’t always the best month for numbers of wahoo, but they can be some of the biggest specimens of the year.

Large blackfin tuna should be around and can be caught on poppers, jigs, or while trolling, and a few yellowfin tuna have been caught locally, but not in large numbers yet. 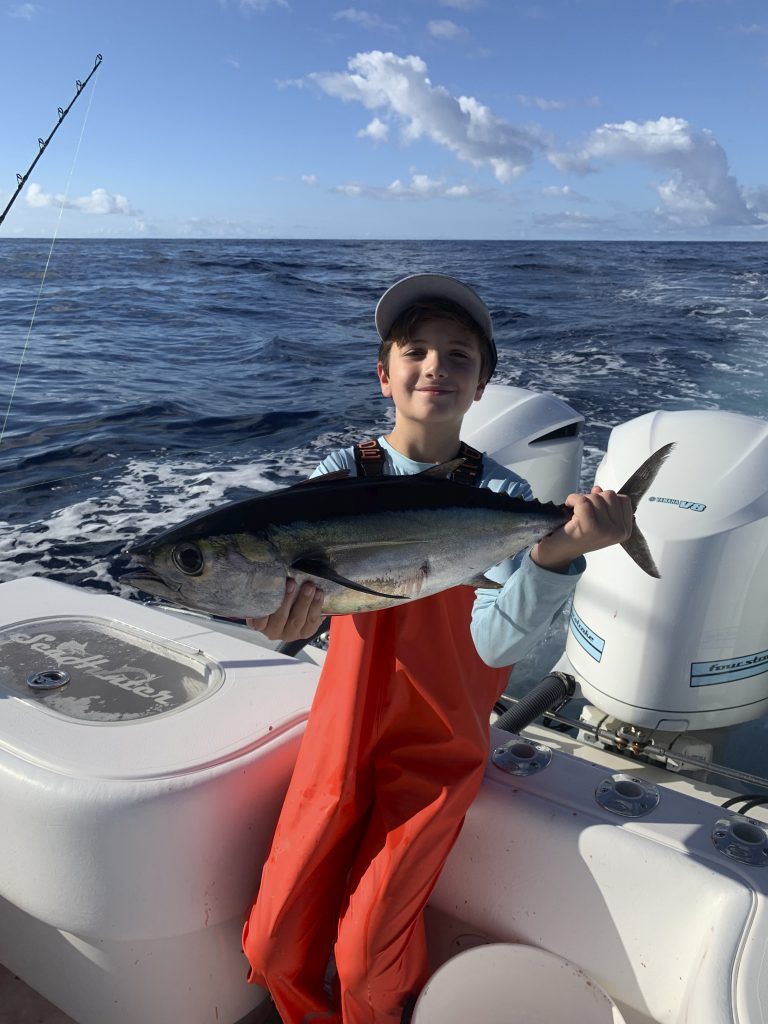 Fisher Blanton (age 10) with a blackfin tuna that fell for a trolled ballyhoo while fishing offshore with Capt. Rick Croson of Living Waters Guide Service.

Arlen, of Intracoastal Angler, reports that king mackerel are showing up just outside of the Frying Pan Tower area, and with rising water temperatures, they will be on their way closer.

Offshore bottom fishing has been finding some large African pompano and a few cobia while jigging structure at the break.

Closer to the beach, the nearshore ARs are loaded with the smaller class of black sea bass.

Sheepshead, black drum, and tautog are still holding out there as well with water temperatures staying cool.

Inshore anglers are reporting a few speckled trout now showing up. They anticipate that drier weather and warmer water temperatures may get these schools feeding more actively.

Red drum are being found throughout the sounds from the marshes to around oyster rocks in mainland creeks.

Black drum and a few sheepshead are holding around inshore structure.

Upcoming changes include bonito fishing, which anglers expect to arrive any day now. As the water temperatures continue to rise, schools of false albacore and bluefish will be shortly behind.

Luke, of Coastline Charters, reports that as the month goes along and water temperatures rise, expect the speckled trout bite to dramatically increase. These schools are moving out of their winter staging areas and feeding from mainland creeks to deeper holes around the inlet. These changes are intensified with the arrival of bait pushing inshore from the ocean. When water temperatures get in the high 50s, topwater baits become productive early and late in the day. The trout will also be chewing on a variety of Z-Man plastics or Vudu shrimp on Blue Water Candy jig heads.

The red drum action should stay as strong as it has been all winter. These larger schools will start to break up as they move around to feed in new areas. The reds will soon be keyed in on topwater plugs both early and late in the day. Targeting the area’s docks, oysters, and similar hard structure with Carolina-rigged live or cut baits will also be productive.

Black drum will be found staged up around these same structured areas, with fresh shrimp or crabs being the top bait choices.

Be on the lookout for bonito and false albacore to show in the area on their spring run. These schools will be found breaking the surface both early and late as they crash the bait schools. Casting hard baits and glass minnow style jigs into these frenzies will produce bites. When not spotted on the surface, it’s best to troll deep diving plugs over nearshore structure and near bait pods. 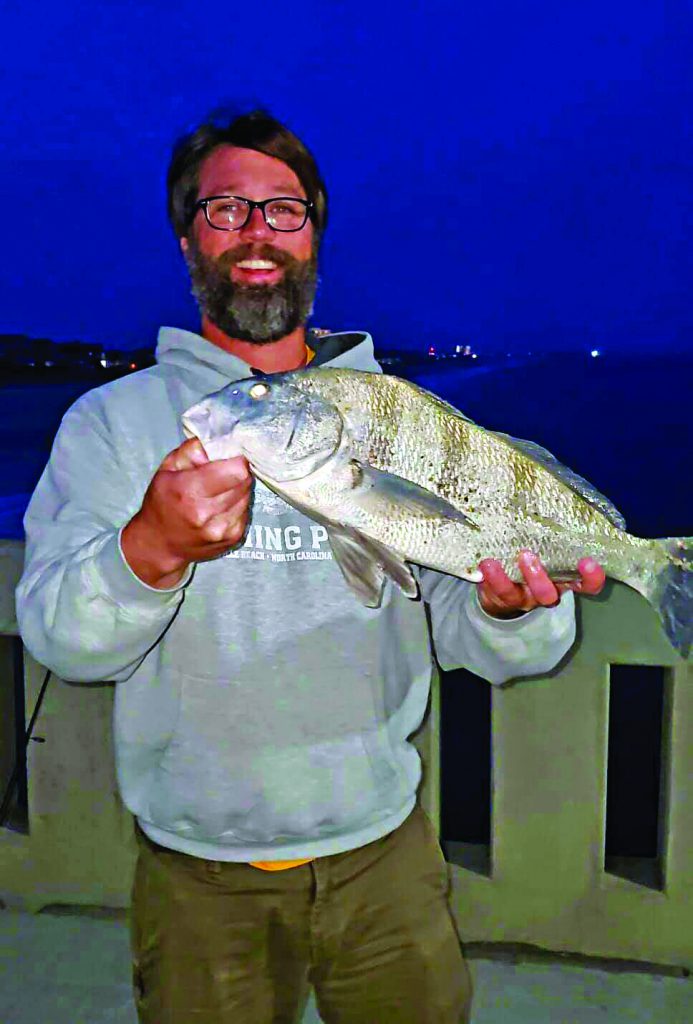 Rick, of Living Waters Guide Service, reports that trolling trips are targeting the plentiful blackfin tuna numbers in the area.

Wahoo are mixed in the ballyhoo trolling action, with hopefully a few yellowfin tuna (if they make another strong showing this season).

Jigging the deeper structure is producing blackfin tuna, large amberjacks, and the chance at solid springtime yellowfins (up to 50 lbs.).

African pompano action has been great this year, with plenty of large fish holding over any hump you stop at.

Eric, of Johnnie Mercers Pier, reports that smaller whiting and croakers were the first species to arrive now that the weather has begun to stabilize.

A few dogfish sharks are sticking around with the cooler waters.

Black drum and pufferfish are mixed in the counts from anglers bottom fishing.

Bluefish should be showing up shortly with water temperatures getting closer to the 60-degree mark.

Spanish mackerel are a possibility towards the end of the month, if conditions and weather patterns come together.