Tex, of Tex’s Tackle, reports that the speckled trout bite continues to be strong as we move into winter. Most anglers have been finding schools of mostly small to mid-sized trout in their typical fall holes from the surf to the backs of creeks. Though scattered, there are still a few large trout (to 5+ lbs.) staged in these same areas. A variety of MirrOlures, live shrimp, and soft plastics are all getting strikes.

Anglers fishing docks along the ICW are catching black drum and some smaller red drum (to 24”) with Carolina-rigged shrimp.

The surf and pier anglers are still finding a mixed bag of virginia mullet, pufferfish, bluefish, trout, and the occasional pompano being caught with bottom-rigged baits.

Anglers headed off the beach are targeting king mackerel out around the pockets of any 68 degree water (20 mile range or so). Look for the kings to hover in this range until the cooler water temperatures push the fish out.

Grouper fishing has been good in the 25+ mile range.

Over the next few months, the target species will stay similar to current trips. King mackerel will hover in the 25-mile range, though this action will be weather and water temperature dependent. Grouper catch-and-release action will push out into the 40+ mile range.

Anglers making a Gulf Stream run during a positive weather window will find blackfin tuna and wahoo staged over structure.

Bluefin tuna are already popping up in the area. These giant fish will push by the Wrightsville beaches and hover off Morehead, if patterns are similar to seasons past.

Anglers looking to fish from the surf will catch scattered large sea mullet (to 2+ lbs.), black drum, and some red drum that are pushed out of the sounds. 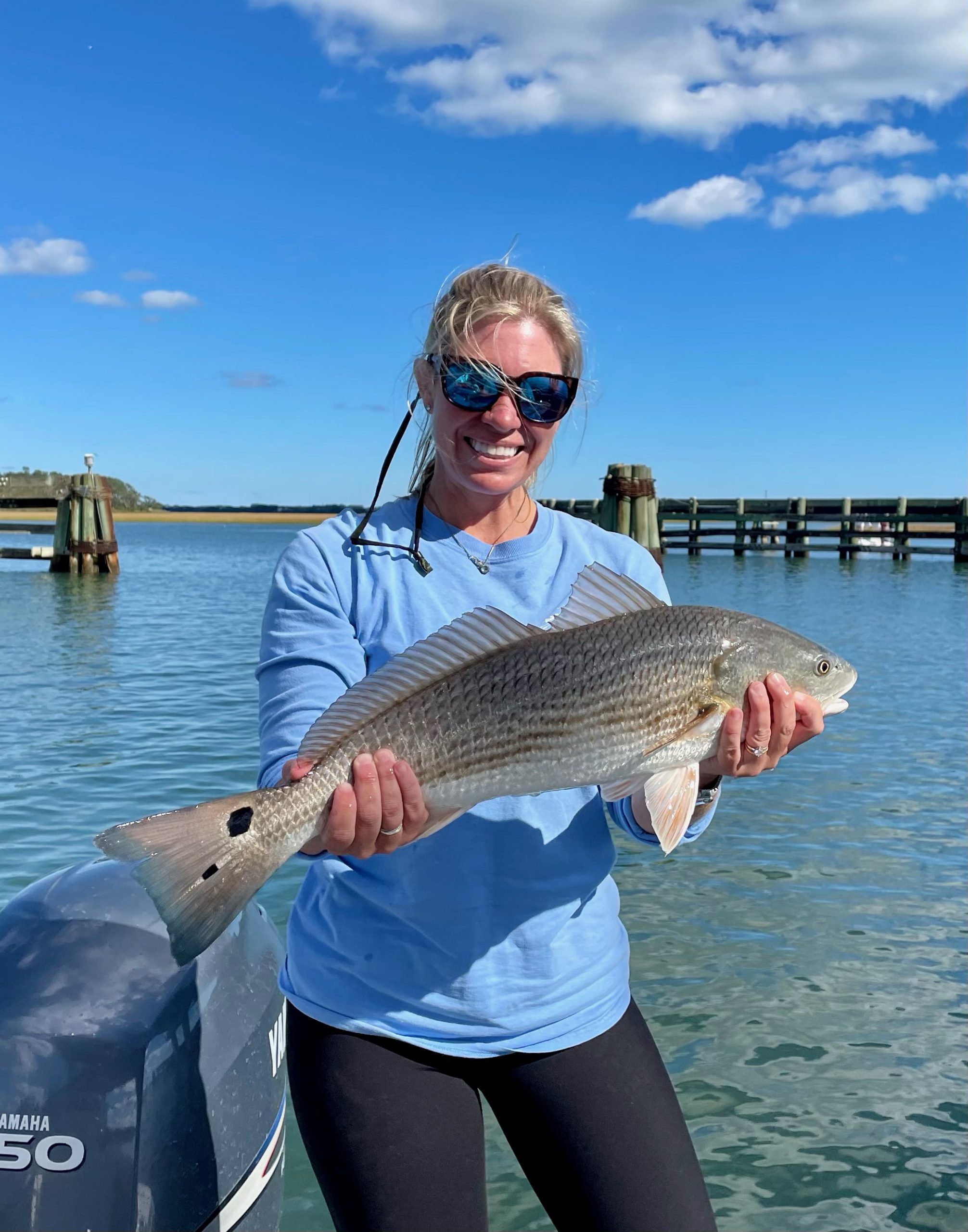 Teresa Young, from Wilmington, with a red drum caught on live bait in the ICW behind Figure Eight Island. She was fishing on the “Skirtless” with Capt. Ryan Young.

Jackson, of Intracoastal Angler, reports that surf anglers are catching some speckled trout and red drum, and the local piers have been doing best while fishing bottom rigged baits with a mix of virginia mullet and spot.

Inshore fishing has been centered around red drum and speckled trout action. These fish are being caught in holes from the inlet back into mainland creeks.

Nearshore anglers are finding king mackerel pushed out in the 15-25 mile range, and scattered schools of false albacore are being caught from the nearshore wrecks out to 20 miles.

Bottom fishing has been producing good action on black sea bass and groupers in the 10+ mile range.

Offshore trolling has been finding wahoo, blackfin tuna, and a few sailfish. All three of these species will hang around in the warmer waters through January.

Going into early next year, look for inshore anglers to keep speckled trout and red drum in their sights. The trout will be staged in holes back in creeks and hitting live baits or artificials fished very slow. As long as we have another mild winter and no major freezes, the action will be steady.

Red drum will be in the same deeper creek areas, as well as in tight groups under docks in the ICW. Carolina-rigged baits are great for targeting these wintertime reds.

Luke, of Coastline Fishing Charters, reports that red drum have started to gather in their large, wintertime schools, and they continue this pattern through March. These schools will hold in many of the same areas they do in the summer, but just consolidated. Targeting areas tight to boat docks can be productive when fishing Carolina-rigged mud minnows, fresh shrimp, and cut baits. Heading back into the marshes can also be productive for anglers sight casting the skinny waters along oyster beds and bays. The same bottom fishing tactics used around docks can produce bites, but plenty of times these flats fish can be coaxed to strike artificials. Z-Man swim baits and soft plastic shrimp are great starting lures for the shallow areas.

Good-sized black drum are showing up alongside redfish near docks and oyster structure. Carolina-rigged shrimp or crabs are best for the black drum action.

Speckled trout fishing has been very good this year, though the bite will slow as the water continues to cool. Target areas around deep grass banks, ledges, and deep holes in mainland creeks for action through the winter. Z-Man soft plastics are great for the trout, with success mostly being found with shrimp, Trout Tricks, and swimbait molds. Similar to the red drum, it is important to slow down bait presentation as the water cools. If fishing live baits such as shrimp or mud minnows, the use of floats will help.

Sheepshead are hanging and feeding around oysters and docks along the ICW. Carolina-rigged fiddler crabs fished tight to these structures are a good bet to find some bites. Going into the winter, these fish move to the nearshore wrecks off the beach where they holdover in the winter. The same fiddler crab baits will work off the beach as well. 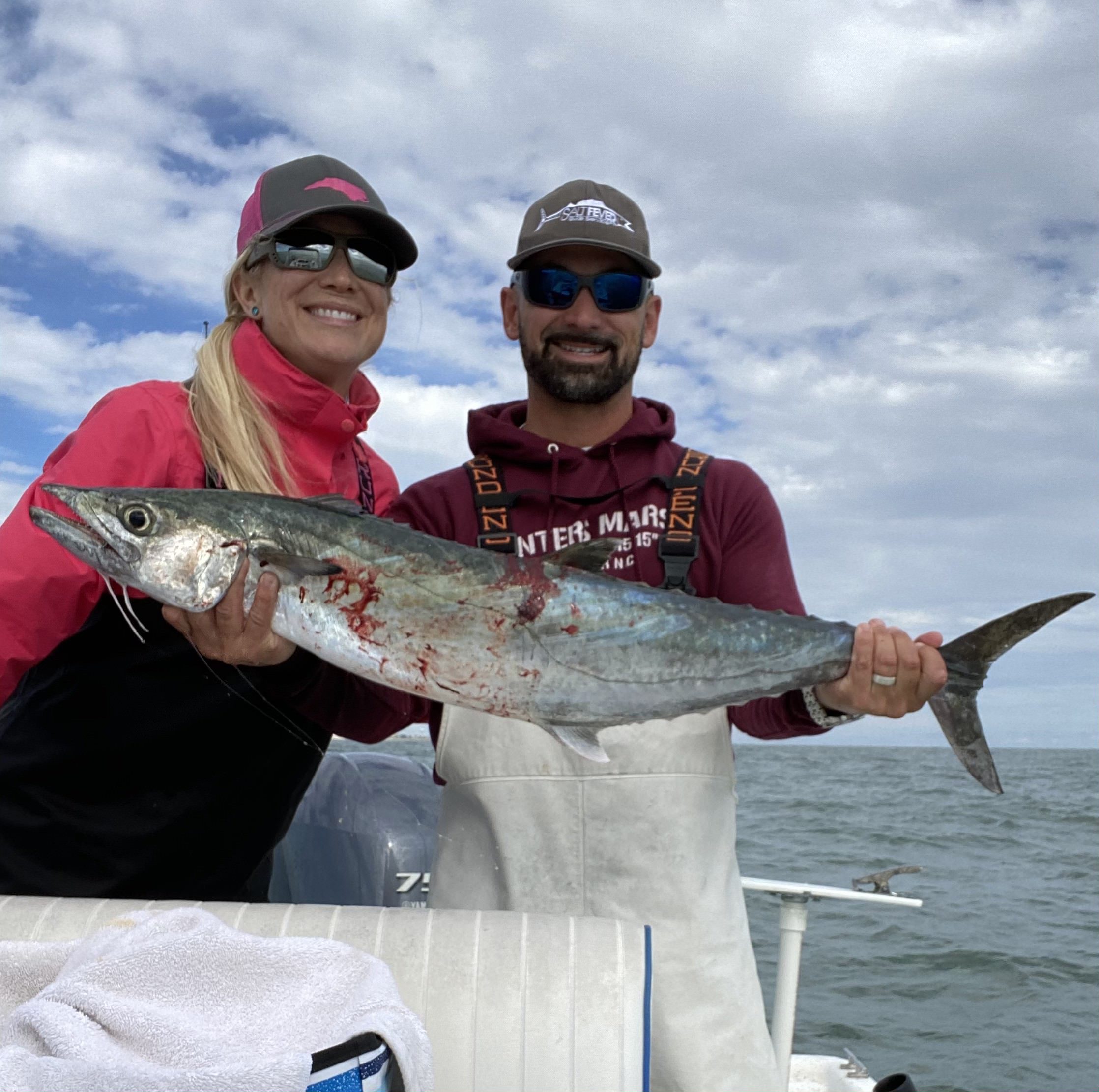 Windy Christy, from Lumberton, landed this 17 lb. king mackerel just off the north jetty of Masonboro Inlet on a live bluefish. She was fishing with her husband, Dick Christy.

Rick, of Living Waters Guide Service, reports that anglers headed out to the Gulf Stream are finding action on blackfin tuna, wahoo, and some sailfish. These same species will be holding over offshore throughout the winter for those times that anglers can find a favorable weather window.

Bottom fishing for grouper and similar structure-oriented feeders will be good until the season ends.

Winter is a great time for anglers to do some deep water jigging for African pompano around the break, and these offshore structures can also produce fun popping action on large amberjacks and blackfin tuna.

Swordfish are being caught by anglers deep dropping the 1600’ depth range. Again, this fishery is very dependent on finding a good weather window to make the long run.

Erik, of Johnnie Mercers Pier, reports that with water temperatures cooling, anglers are focusing on bottom fishing. Pufferfish and rays have been prevalent, and smaller whiting are also in the mix for anglers fishing bottom-rigged baits.

Through January, anglers headed to the pier can expect to find speckled trout, bluefish, and whiting.