Matt, of Tex’s Tackle, reports that red drum, sheepshead, and black drum are hanging around docks and bridges in the ICW. Topwater lures and spinnerbaits are two great lures for searching when back on the flats, and shrimp, fiddler crabs, sand fleas, and mud minnows are all strong bait choices when fishing around structure.

There have been some nice-sized speckled trout caught, mostly on topwater plugs first thing in the morning or as the sun goes down.

Flounder fishing has been consistent, despite being all catch and release.

Surf and pier fishing has been solid, with scattered catches of sea mullet, pompano, spot, croaker, black drum, bluefish, and red drum. Fresh shrimp or sand fleas are going to be the all-around best baits for bottom fishing.

The nearshore trolling has been good for spanish mackerel, false albacore, bluefish, cobia, and some kings within a few miles of the beach. If the water is stirred up nearshore, you may need to push off a few miles to find a better bite. Anglers can throw casting jigs to the spanish, albacore, and bluefish feeding on the surface, or drop the jigs down and vertical jig when the schools are suspended. Trolling with Clarkspoons or Drone spoons behind planers is almost always effective, and Yo-Zuri deep divers are another easy option if you want to troll.

Live bait is a great option for targeting the bigger spanish, cobia, and kings.

There are now mahi in the 25 mile range and even closer, and mahi fishing should pick up as more of the clean Gulf Stream water pushes in.

In the 15-20 mile range, the gag grouper bite has been decent, along with some black sea bass, beeliners, grunts, triggerfish, amberjacks, and porgies.

Further offshore (40+ mile range), the fishing for scamps, gags, and red grouper has been solid (along with triggerfish).

Trolling in the Gulf Stream has been producing mostly mahi and marlin. The key has been finding the formed up weed lines and/or temperature breaks. There have still been a few stray yellowfins, blackfins, and wahoo mixed in.

The jigging action has been good for amberjack, snapper, and grouper. 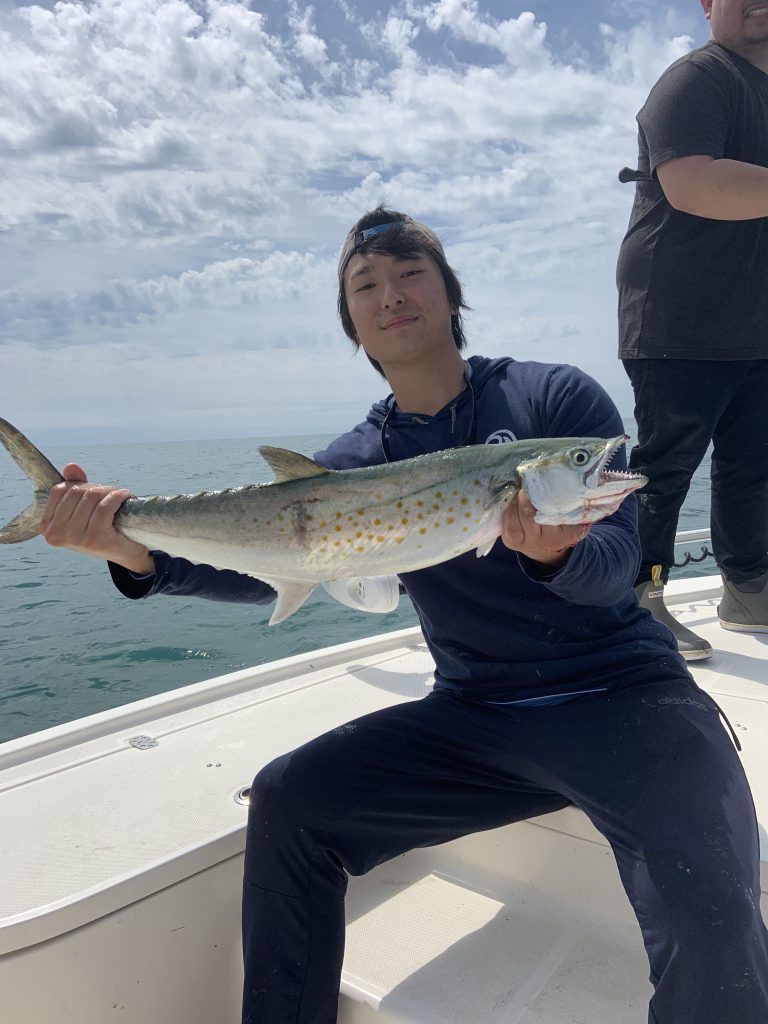 Thomas Park, from Wilmington, with a spanish hooked on a casting jig. He was fishing in 30′ of water off of Kure Beach with Capt. Zane Long of Falling Tide Fishing Adventures.

Ryan, of Intracoastal Angler, reports that red drum fishing has been solid inshore, as the smaller, summertime groups of fish are spread out and feeding on live bait in the area. Anglers can find them while targeting a variety of areas from flats back in the marsh, to ICW docks, and out to deeper holes around the inlet.

Some speckled trout are being pulled in from deeper holes around creek mouths and the inlet area.

Flounder catches are becoming more common as fish push inshore and take advantage of all the live bait.

Large sheepshead are being caught around the area’s bridges and pilings along the ICW. Black drum are mixed in around these structures, and they’re feeing mostly on live or fresh shrimp.

Nearshore anglers have been finding good numbers of spanish mackerel from the beachfronts out to nearshore wrecks, with live bait fishing around the wrecks producing the larger fish.

Good-sized gray trout continue to feed at the nearshore ARs.

Schoolie-sized king mackerel (up to 15 lbs.) are holding from the beach out to 15 miles, but the deeper areas (7+ miles) have been holding the highest concentration of kings.

Anglers in the 15-30 mile range are landing kings and seeing some good mahi showing up, and trips to the Gulf Stream are producing wahoo and gaffer mahi.

Bottom fishing the deeper wrecks has been producing African pompano and grouper.

Luke, of Coastline Fishing Charters, reports that the redfish action has been excellent. The influx of bait has the fish fired up, with anglers finding reds crushing topwater plugs at first and last light. Target the back of mainland creeks and areas along oyster bars for the most success. If not hitting surface baits, the redfish are taking an interest in Z-Man shrimp fished under popping corks or on a jig head. Redfish can also be found when targeting some of the pilings and oysters that line local waterways. Targeting these areas is best with Carolina-rigged live or cut baits.

Sheepshead fishing has been great on bridges and docks along the ICW. Carolina rigs setup with live fiddler crabs fished tight to the structure is producing most of the strikes.

Spanish mackerel fishing has been solid along the beaches for anglers pulling Clarkspoons behind planers or trolling weights. Stingsilvers, Gotcha plugs, and similar glass minnow casting jigs are a great setup when sight-casting to spanish busting baits on the surface.

Though flounder season is still closed, there are great numbers holding on the nearshore structure. Both live baits and bucktails are generating action. 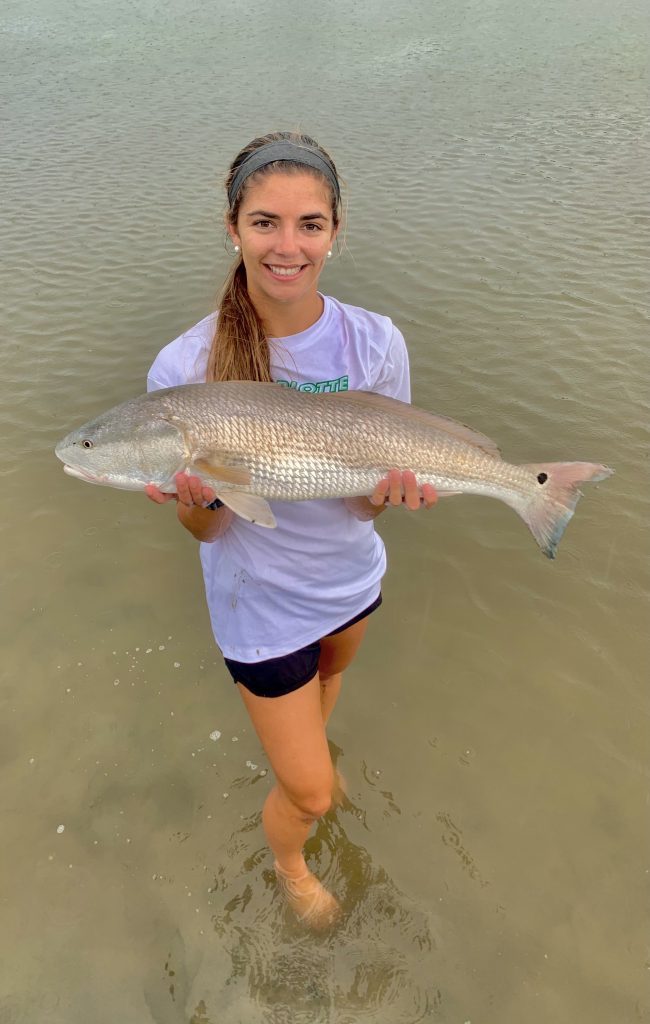 Haley Shand, from Wilmington, holds up a 31″ red drum that she caught (and released) while fishing the Wrightsville Beach area using a mud minnow on a Carolina rig.

Rick, of Living Waters Guide Service, reports that anglers running deep (to the 1400-1800’ range) are finding some swordfish, and billfish action has been steady with blue and white marlin in the Stream.

Trolling at the break is producing blackfin tuna and good numbers of gaffer dolphin.

Bottom fishing has been great when anglers have caught conditions where the current isn’t ripping. Big scamp grouper and yelloweye snapper are holding over these deeper structures.

Bottom fishing in the 40-mile range is producing a variety of grouper species and American red snappers.

Patrick, of Johnnie Mercers Pier, reports that spanish mackerel action has been hot in the mornings and evenings for anglers casting Gotcha plugs.

King mackerel (up to 34 lbs.), a few barracuda, and the occasional tarpon are hitting live baits fished off the end.

Flounder (up to 20”) are mixed in for anglers bottom fishing.

Sheepshead (up to 6.5 lbs.) are being seen around the pilings. Rigging fiddler crabs and sand fleas and setting up tight to structure has been key.