Matt, of Tex’s Tackle, reports that red and black drum have been hanging around docks and bridges in the ICW, and good numbers of nice-sized sheepshead are moving into these same areas.

The big schools of redfish have started to break up into smaller groups and spread out in the marshes and creeks. Topwater lures and spinnerbaits are great for searching around the flats. Shrimp, fiddler crabs, sand fleas, and mud minnows work well around structure, and Z-Man and Gulp soft plastics have been the best option for mid-day efforts.

It won’t be much longer until the first few cobia will start to move through.

Surf and pier fishing has been good, with catches of sea mullet, pompano, black drum, bluefish, spanish, and king mackerel. Fresh shrimp is going to be the all-around best bait for bottom fishing. The spanish and bluefish are hitting Gotcha plugs and casting jigs, and the kings are being caught on live bait.

The nearshore trolling action has been strong, with spanish mackerel, false albacore, bluefish, and some kings all being caught within a few miles of the beach. Throw casting jigs to fish on the surface or drop jigs down and vertical jig when the fish are suspended. Trolling with Clarkspoons or Drone spoons and planers is almost always effective, too, as are Yo-Zuri deep divers, and live bait is a great option for targeting bigger spanish and kings.

There are still some great opportunities for nearshore bottom fishing, with natural ledges and ARs holding gray trout, black sea bass, and grunts.

Offshore (in the 20+ mile range), the gag grouper fishing has been good, along with some black sea bass, beeliners, grunts, triggerfish, amberjacks, and porgies.

Further offshore, the fishing for scamp and red grouper has been good when the weather allows the run. Keep in mind that red grouper season opens up on June 1.

Trolling in the Gulf Stream has been steady. Big blue marlin made a strong showing over the last couple weeks, along with some good fishing for mahi. The key has been finding the weed lines and temperature breaks.

There are a few yellowfins, blackfin tuna, and wahoo mixed in as well. 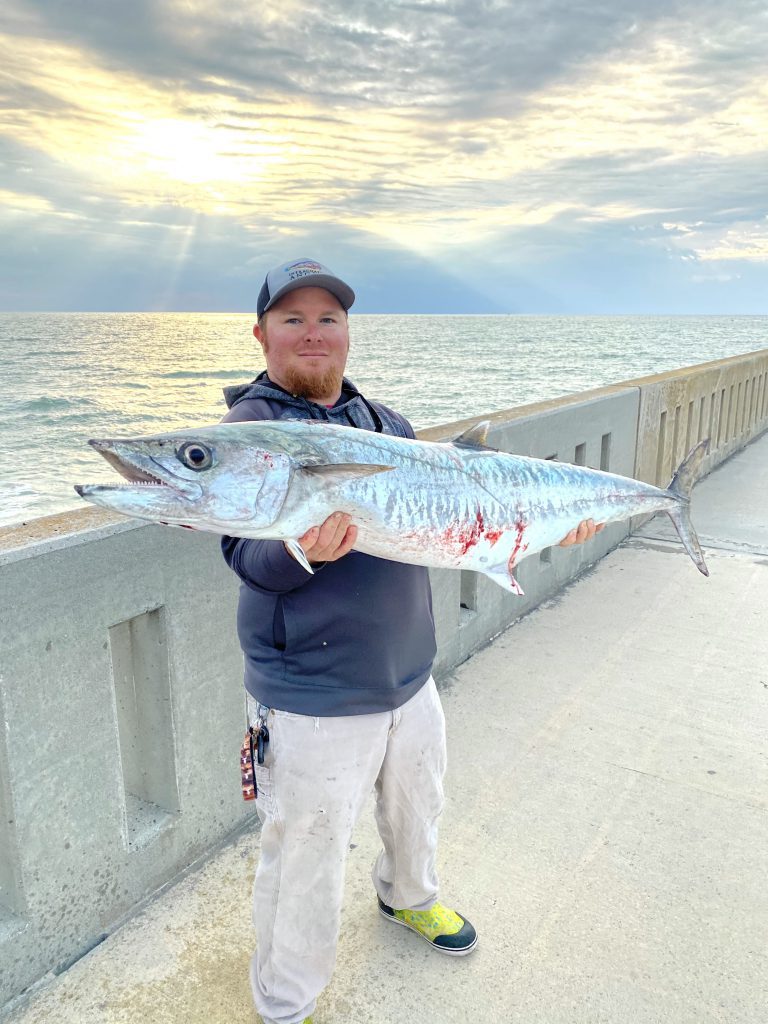 Chris Hodge, from Wilmington, with a 40 lb. king caught on a live bluefish while fishing from Johnnie Mercer’s Pier.

Gaffer-sized mahi are showing up for anglers trolling skirted ballyhoo.

Nearshore anglers trolling deep diver plugs and spoons are catching spanish mackerel and kings, and a few false albacore are mixed in with the nearshore bite.

Surf anglers are doing well while bottom fishing, with catches of sea mullet and pompano, and spanish mackerel and bluefish are coming within casting distance of the sand.

Inshore anglers have found flounder to be showing up on recent trips.

Red drum and speckled trout are holding from around deeper areas of mainland creeks back up onto grass flats.

Sheepshead are settling in around inshore docks and structure.

Luke, of Coastline Fishing Charters, reports that nearshore spanish mackerel fishing is in full swing. Anglers can find them busting the surface at both first and last light. Casting jigs and casting spoons are great when spotting them on the surface, with trolled spoons under planers working when the fish are deep. Deep diving plugs are another great lure to have for the trolling spreads.

There are still a few Atlantic bonito mixed in with the spanish.

Inshore, the sheepshead bite has fired up. Carolina-rigged fiddler crabs have been great for anglers working the area docks, bridges, and oyster bars.

Redfish are starting to crush topwater plugs back in the grass and shallow water areas. Z-Man soft plastics have worked well for when the topwater action slows down. Some redfish are holding around ICW docks, with cut and live baits being best in these areas.

Speckled trout action is fair now that the inshore waters are warming up. Topwater baits fished early and late are getting some strikes, and they make great search baits. A variety of Vudu shrimp and Z-Man soft plastic shrimp and jerk baits are also working well for the trout. Targeting creek mouths and deeper creek channels has provided the most successful action. 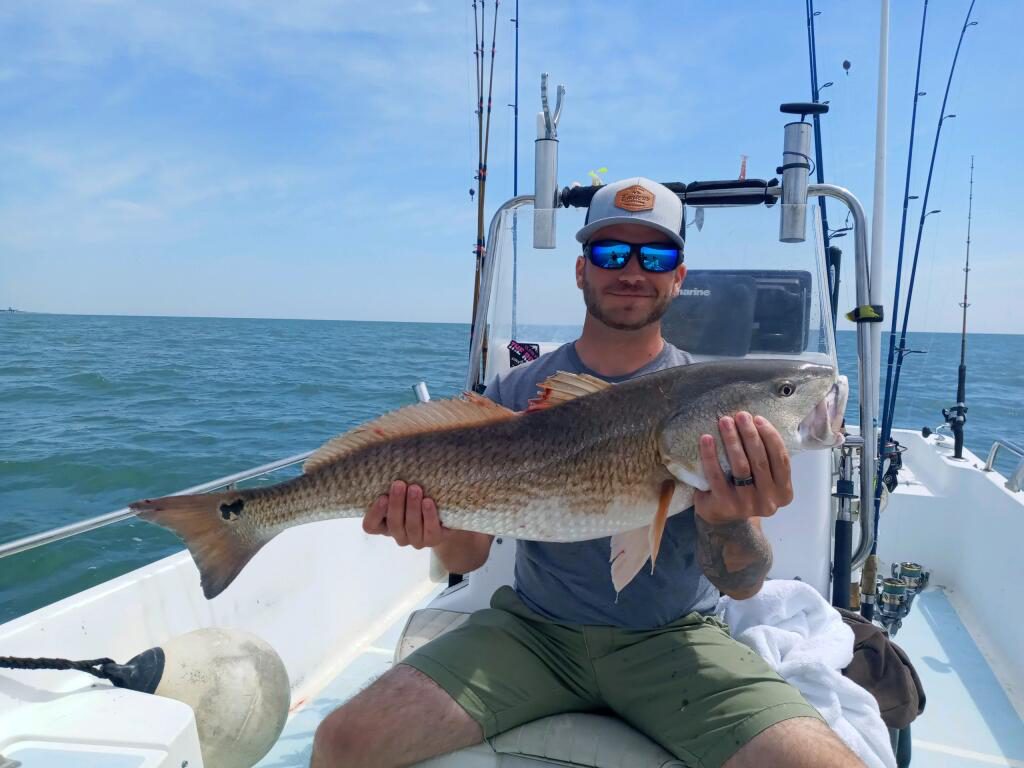 Brody Dinko, of Morgantown, WV, with an over-slot red drum caught using a live menhaden off Masonboro Island. He was fishing with Capt. Jamie Rushing of Seagate Charters.

Rick, of Living Waters Guide Service, reports that offshore action has been great, with both yellowfin and blackfin tuna striking trolled setups. Anglers looking to fish poppers and jigs are catching blackfin and yellowfin by targeting areas over structure.

A few wahoo are mixed in the same areas as the tuna.

The mahi run has just started, and the bite is getting even better with each trip.

Billfish are making a showing in the region as well, and grouper fishing at these deeper offshore areas has been excellent.

A few kings are being landed by anglers fishing live baits off the end.