Matt, of Tex’s Tackle, reports that red and black drum have been hanging around docks and bridges in the ICW. The big schools of redfish have started to break up into smaller groups and spread out in the marsh. Shrimp, fiddler crabs, sand fleas, and mud minnows are all great baits when fishing around structure.

Some speckled trout are mixed in for anglers targeting redfish.

Surf and pier fishing has been improving, with good numbers of sea mullet, black drum, and bluefish being caught recently. Fresh shrimp is going to be the all-around best bait for bottom fishing. A few flounder, red drum, croakers, and speckled trout are also scattered in the surf.

The nearshore trolling game has started to fire up. Spanish mackerel, Atlantic bonito, false albacore, bluefish, and small kings have all shown up within a few miles of the beach. Trolling Clarkspoons or Drone spoons behind planers are almost always effective, with Yo-Zuri deep divers being another great option. Anglers are also throwing casting jigs to fish on the surface or dropping the jigs down and vertical jigging when the fish are suspended.

Further offshore (in the 20+ mile range) keeper black sea bass, beeliners, grunts, triggerfish, amberjacks, and porgies are all coming in.

Trolling in the Gulf Stream has been solid most days. Big blackfin and the yellowfin tuna can be caught on poppers and jigs once you locate them. Trolling with cedar plugs, green machines, or small ballyhoo should get bites on the troll.

Wahoo are being caught in waters shallower than 200’ with high-speed lures and ballyhoo.

Mahi are starting to show up, and jigging deeper bottom structure is producing amberjack, tuna, grouper, and snappers. 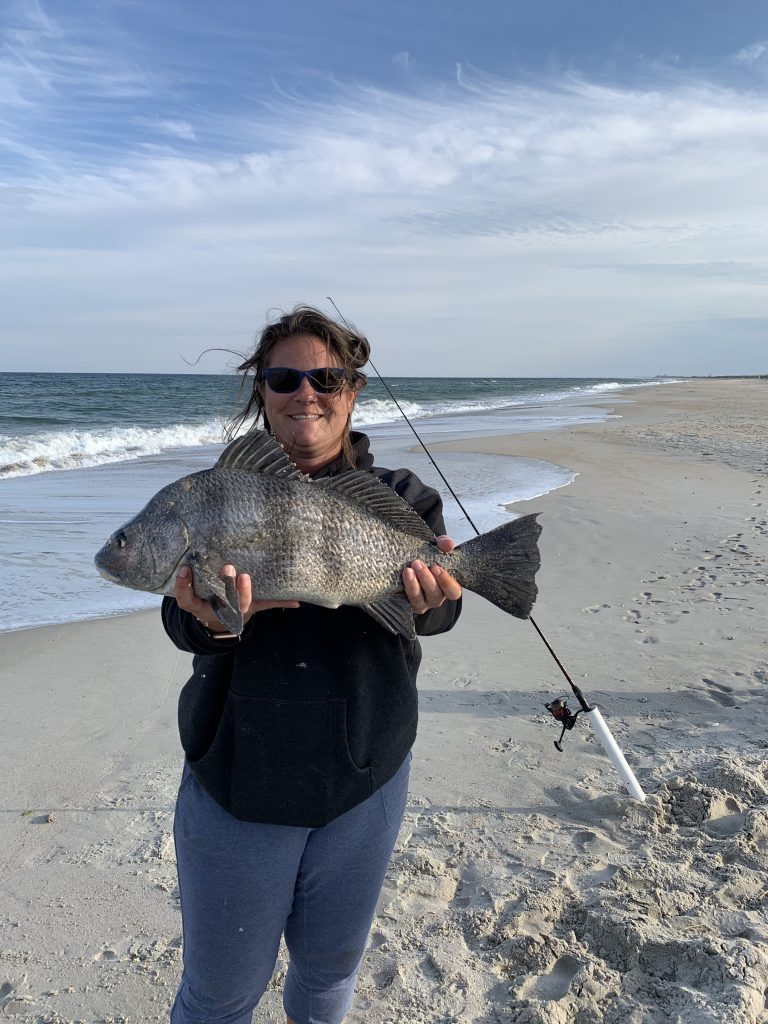 Abby Norton, of Wilmington, with a 23” black drum that fell for a piece of shrimp while fishing Masonboro Island.

Blair, of Intracoastal Angler, reports that anglers fishing the inshore and Cape Fear River areas have been doing well with both speckled trout and red drum.

Black drum and sheepshead are being caught with shrimp around docks, oysters, and similar deeper structure, and a few flounder have started to show up and will be mixed in going into summer.

Surf anglers are having the most success with sea mullet and pompano coming on bottom rigs, but the beach is also seeing bluefish more plentiful as the blues follow bait into the inlets.

Spanish mackerel are being landed just off the beach by anglers casting and trolling spoons around bait schools.

Bonito action has been only pretty good. The back-and-forth weather pattern has kept very large numbers of fish from pushing onto the beaches, but it has also kept them hanging around longer than normal. Expect to see scattered action as long as cooler weather sticks around.

A bit further off the beach, anglers are catching great numbers of black sea bass and snappers over deeper bottom structure.

King mackerel are still holding fairly deep, but over the next month they will start pushing in as bait arrives off the beach.

Offshore trips are catching large wahoo and blackfin tuna. Yellowfin tuna has been pretty good and mahi are already being landed. Also, anglers trolling in the Stream are starting to see sailfish and blue marlin popping up in the spreads.

Luke, of Coastline Fishing Charters, reports that spanish and king mackerel are pushing their way onto the beachfronts. Look for schools to be busting the surface both early and late in the day. Casting metal jigs and spoons will be best when sight-casting at these schools. When not on the surface, anglers can get action by trolling Yo-Zuri deep diver plugs.

There will be schools of false albacore and bonito mixed in.

Inshore, the red drum action is heating up, with action being seen up and down the ICW. Anglers looking to fish topwater plugs will do best in the early and late hours. Rigging fresh cut bait, shrimp, or live baits and fishing around docks or oysters will be very productive.

Black drum will be mixed in around the inshore structure, with fresh shrimp being best for targeting them.

Live crabs fished on a Carolina rig will get sheepshead in the boat. Expect to find the sheepshead holding tight to bridges, oysters, and other hard structure.

Though the season is closed, flounder will be caught by anglers working the grass banks or areas around the inlet. Carolina-rigged live bait or Z-Man plastics fished on the bottom will be producing these bites. 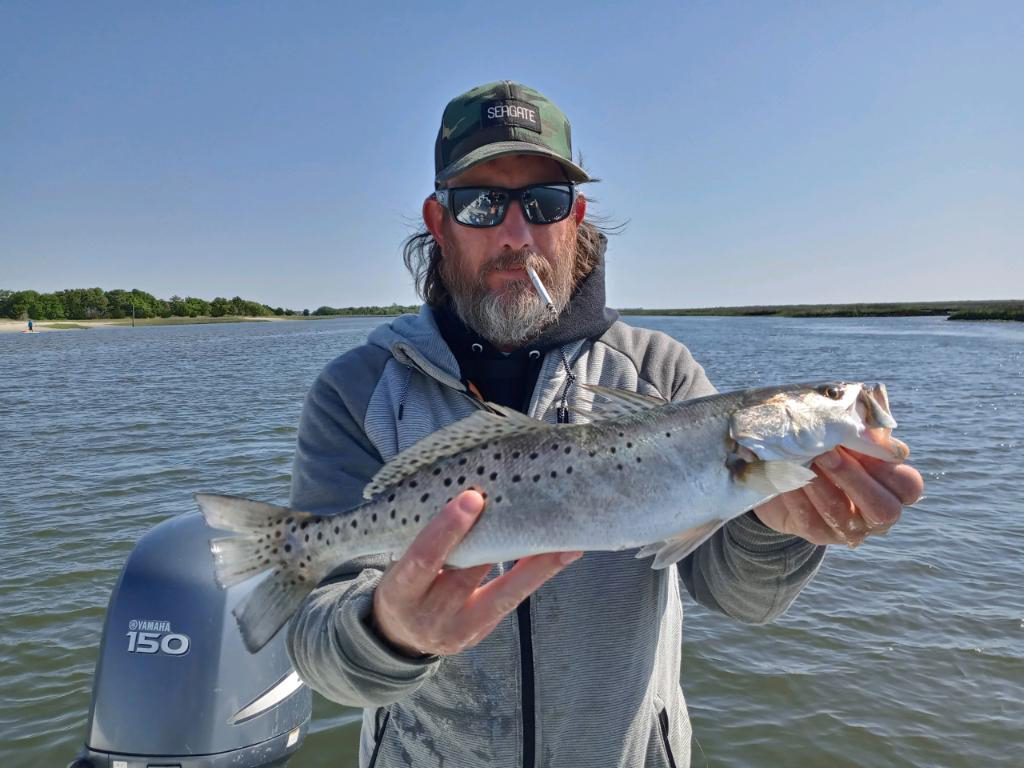 Arthur Morton, of Seagate, NC, with a speckled trout caught on a soft plastic in the Wrightsville area. He was fishing with Capt. Jamie Rushing of Seagate Charters.

Rick, of Living Waters Guide Service, reports that offshore trips are producing good blackfin and yellowfin tuna action. Both trolling and working jigs or poppers have been putting fish in the box.

Some large, scattered wahoo are mixed in with the trolling action.

A few mahi are showing up in the counts, with numbers only expected to rise as they push into the area over the coming weeks.

Pat, of Johnnie Mercers Pier, reports that sight-casting anglers are starting to see a lot of action on the surface. Good-sized spanish mackerel were some of the first schools to arrive, and they have been hitting Gotcha plugs.

Atlantic bonito moved into the area and are hitting smaller glass minnow jigs. Recently the bite has been much better for anglers in the late afternoons and going into the evenings.