Tex, of Tex’s Tackle, reports that anglers have found the red drum to be feeding in both mainland creeks and out in the surf zone. These fish have been in a wide variety of sizes, from lower-slots to 40+”. Both live and cut mullet has been producing most of the strikes.

Speckled trout action has been getting better, but with water still in the 70s, anglers look forward to a cool down over the next few weeks to fire off the bite.

Surf anglers have been doing very well while bottom fishing, with a mixed bag of pompano, black drum, Virginia mullet, and bluefish.

Nearshore anglers have been seeing tons of bait moving along the beachfronts. A mix of spanish mackerel, good-sized bluefish (3-6 lbs.), and false albacore are all reacting to the favorite tactics of trolling spoons or casting at surface-feeding frenzies.

The offshore fishing action has been up or down, but the quality of fish has been good when anglers make the long run. A mix of large wahoo (to 70 lbs.), blackfin tuna, and scattered mahi are in the landings from anglers trolling ballyhoo rigs. 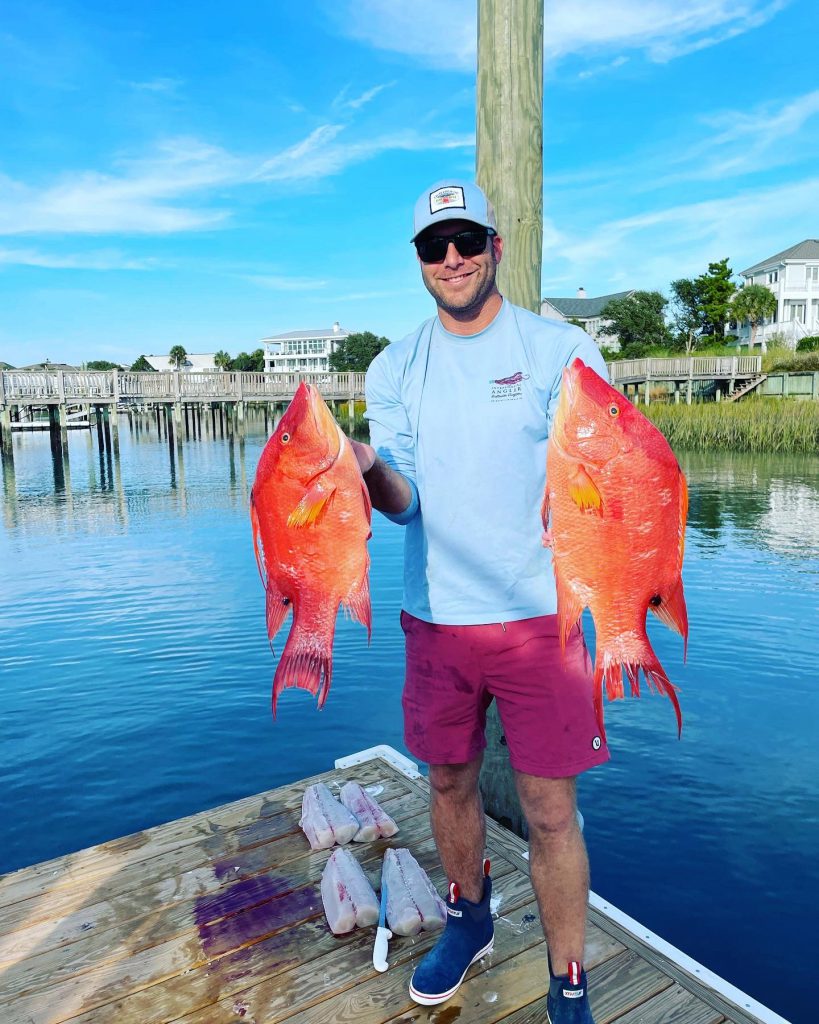 Alex King, from Winston Salem, with a couple of hogfish caught on cut bait in 150′ of water near the Nipple.

Ben, of Intracoastal Angler, reports that inshore anglers are starting to see speckled trout show up around area inlets. Topwater plugs are getting action for those out on the water early, with D.O.A. soft plastics and live shrimp also being very successful.

Inshore docks and bridges are holding sheepshead for those fishing with fiddler crabs.

In the surf, anglers are catching tons of pompano on sand fleas. In addition, some slot-sized red drum are mixed in the surf for anglers with Carolina-rigged baits.

Nearshore anglers have been catching huge numbers of spanish mackerel and false albacore from the beachfronts out to 5 miles. Both casting jigs at feeding frenzies and trolling around bait balls is producing strikes.

Running out to structure in the 10-22 mile range has been producing grouper for anglers bottom fishing with cigar minnows.

Offshore anglers are finding the action to be widely hit or miss at the break. Though nothing has been consistent, the most consistent action has been trolling skirted ballyhoo for wahoo.

Luke, of Coastline Fishing Charters, reports that speckled trout action is really picking up, as a result of weather patterns seeing more consistent north winds paired with falling water temperatures. Topwater plugs fished at first and last light are producing some big blow-ups as the fish transition. Once the trout push down, anglers are finding success while targeting grass banks and oyster bars with D.O.A. shrimp, Trout Tricks, and MirrOlures.

The inshore and nearshore red drum fishing is pretty much as good as it gets. These fish are hitting topwater plugs early and pushing around oyster bars and docks in warmer parts of the day. Targeting either of these areas with live or cut baits on a Carolina rig is generating action.

The red drum out in the ocean are mostly the larger, 40” class of fish. Target these schools around nearshore structure and bait balls.

The king and spanish mackerel fishing is fantastic. Trolling live or dead baits close to the beach and nearshore structure is producing tons of action on a quality class of fish for both species.

Some good false albacore action is mixed in along the beaches, with anglers getting strikes while casting metal jigs into schools busting on bait. 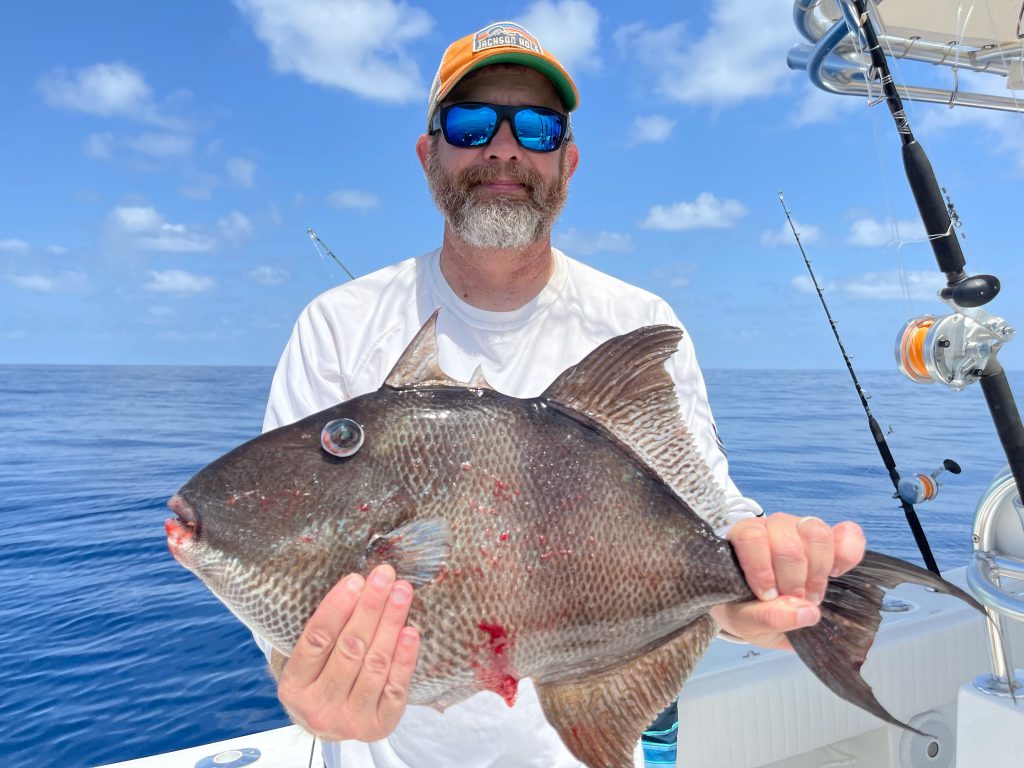 Duane Blanton with a 7.1 lb. triggerfish caught on a Roscoe Jr. jig while fishing in 145’ of water off Wrightsville Beach.

Rick, of Living Waters Guide Service, reports that anglers making the run to the Gulf Stream are expecting to see waters cooling any day now. Once that change happens, anticipate the action coming to a peak during November with catches of wahoo, blackfin tuna, and sailfish.

Offshore jigging for amberjacks, blackfin tuna, and African pompano has also been picking up and will stay strong throughout winter. Look for the blackfin tuna in particular to pick up once the water temperatures drop below 75.

Bottom fishing in the deeper 150-400’ range has been great for mixed bags of grouper species, snapper, porgies, and triggerfish.

Gabe, of Johnnie Mercers Pier, reports that there has been good action on the spanish mackerel and bluefish that are surface-feeding on bait balls. Anglers have had the most success with Gotcha plugs in a variety of color patterns.

King mackerel fishing has been steady, with anglers doing well with live baits fished off the pier’s end.

A few cobia (to 38”) have been caught with bucktail jigs as they cruised by with a school of bait.

Bottom fishing anglers are catching some good-sized pompano with shrimp and jigs, and anglers fishing at night have been catching plenty of whiting.