Matt, of Tex’s Tackle, reports that inshore fishing has really started to pick up. With mullet, menhaden, and shrimp around in good numbers, the fish have gone into a wild feeding mode. Redfish, flounder, and speckled trout have been the main targets, and all have been cooperating.

Topwater lures are a great option early in the morning and late in the day for the red drum and trout. Spinnerbaits and lightweight soft plastics are also good for casting to structure and grass banks throughout the day for both drum and flounder. When the fishing is slow, live bait will still produce fish most of the time.

Sheepshead and black drum are being hooked around docks and bridges, and a mix of spanish mackerel, bluefish, and ladyfish are biting near the inlets.

Surf fishing has been good, with sea mullet, croaker, bluefish, flounder, and red drum all being active.

Local pier anglers are catching spanish and king mackerel, along with flounder and sheepshead from around the pilings. The spanish and bluefish are hitting Gotcha plugs or casting jigs, and king mackerel are taking live baits. Anglers that re bottom fishing on the planks are having success with fresh shrimp and sand fleas.

The nearshore trolling action has been picking up, with some large spanish mackerel being caught. There have been schools of false albacore, bluefish, cobia, and some big king mackerel all within a few miles of the beach. You can throw casting jigs to the surface-feeding spanish, albacore, and bluefish, or you can drop the jigs down and vertical jig when the fish are suspended. Live bait is the best option for targeting the bigger spanish mackerel, scattered cobia, and kings.

There has been hit or miss action for mahi in the 25 mile range (and even closer on some days).

The 15-20 mile range has been producing a mixed bag of gag grouper, black sea bass, beeliners, grunts, triggerfish, amberjacks, and porgies. Further offshore (in the 40+ mile range), the fishing for scamp, gag, and red grouper has been better the closer you get to the Gulf Stream.

Trolling in the Gulf Stream has been relatively slow. A handful of wahoo and sailfish have been caught, along with a few mahi. The fishing should pick up dramatically this month, though.

The bright spot offshore has been a strong swordfish bite for the boats going out deep dropping.

Ben, of Intracoastal Angler, reports that speckled trout action has been picking up now that weather temperatures are starting to drop off from summertime highs. Anglers have had the most success in the early morning with topwater plugs and Z-Man soft plastics fished under popping corks.

Plenty of slot-sized red drum are being caught on live finger mullet in the ICW and flats back in the marsh, and anglers fishing finger mullet around the jetties have been landing some over-slot reds.

Surf anglers are also finding action to be picking up with bait now pushed along the beachfronts. A mixed bag of whiting, black drum, red drum, and plenty of pompano are all being caught.

Action off the beach has picked up significantly, with big spanish mackerel and mixed false albacore hitting casting jigs. There are some king mackerel pushed up on the beach, too, but most of the king action still holds deeper (in the 10-15 mile range).

Bottom fishing has been producing good numbers of gag grouper in the 80-100’ range, and anglers running to the Gulf Stream and pulling ballyhoo rigs are catching wahoo, blackfin tuna, and sailfish. 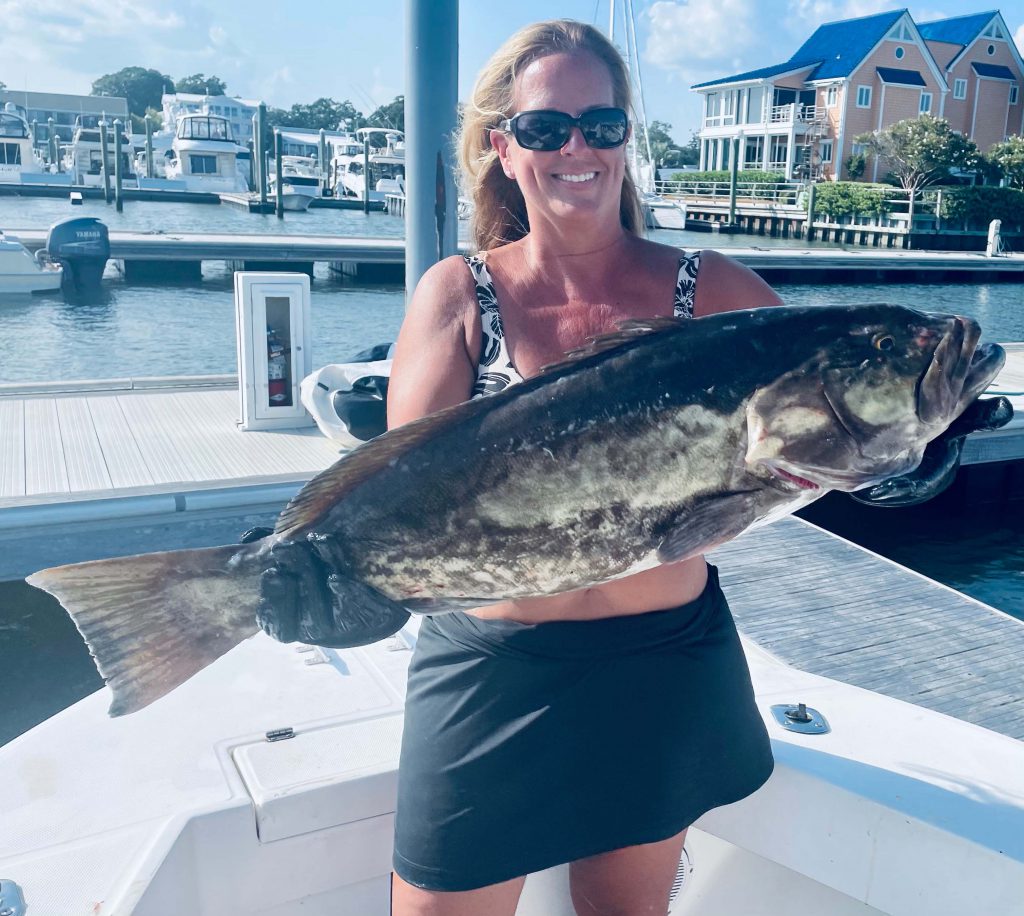 Jen Merritt, of Hampstead, with a grouper that fell for a dead cigar minnow. She was fishing offshore with Capt. David Kesler of Salty Roots Fishing Charters.

Luke, of Coastline Fishing Charters, reports that speckled trout fishing has already begun to improve, as the residential trout start to become more active when migrating fish slowly filter in. The trout are responding very well to anglers fishing topwater baits first thing in the morning and under the low-light afternoon hours. Soft plastic D.O.A. shrimp, Z-Man shrimp, and Z-Man Trout Tricks are also having mixed success in holes and up against banks. The final successful tactic has been to float live shrimp or finger mullet under corks.

The inshore red drum bite has been great. The reds are responding to most of the same tactics being used by trout anglers, including the topwater plugs. In addition, Carolina-rigged cut or live baits will entice bites. Look for these redfish to be staged up around area docks and oyster bars.

Sheepshead fishing is strong and should remain so through October. Fishing Carolina-rigged crustaceans close to hard structure has produced strikes.

Flounder season has passed, but the flatfish are still hanging around for anglers fishing Carolina-rigged live mullet against grass banks and docks.

Nearshore anglers are seeing some great-sized spanish mackerel showing up along the beaches. Fishing smaller live baits on the surface has been best for landing the larger spanish. 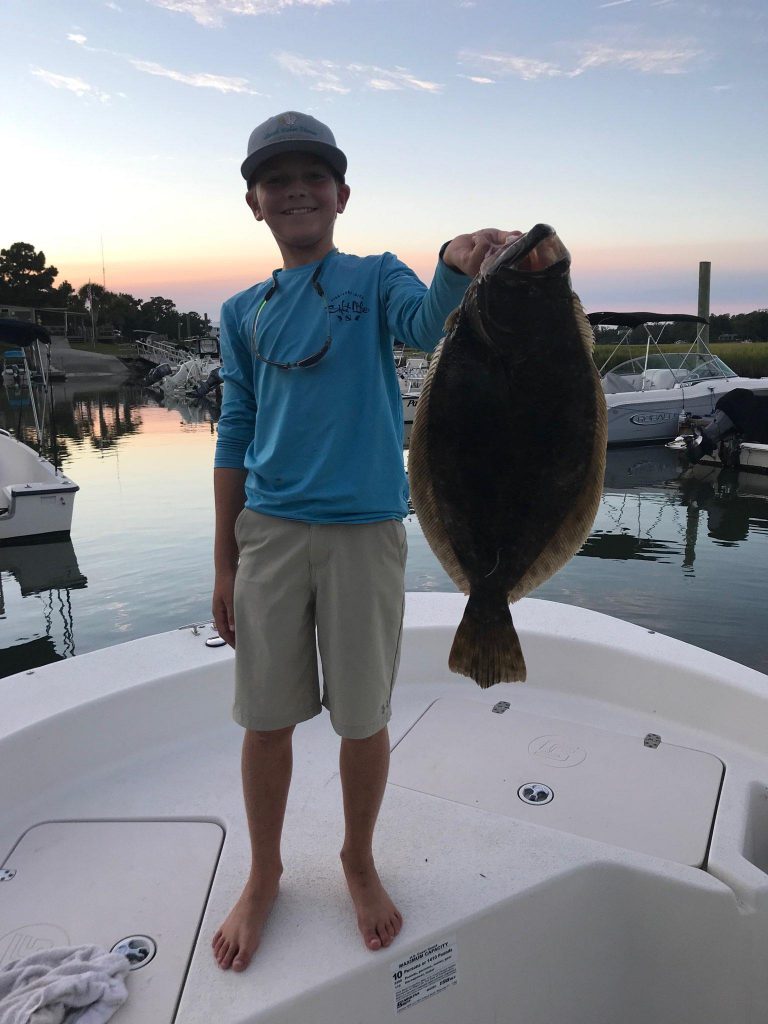 Joe Potanovic (age 12), from Wilmington, with a 24″ flounder caught using chunk mullet on a Carolina rig. He was fishing behind Figure Eight Island.

Rick, of Living Waters Guide Service, reports that anglers making the Gulf Stream run are seeing action pick up now that there has been a slight drop in water temperatures as it moves into fall. Trolling trips are producing wahoo, blackfin tuna, and some bonus sailfish.

Anglers doing some jigging over structure are catching blackfin tuna, mixed bottom fish species, and African pompano. Once getting the blackfins fired up, anglers are also getting strikes on topwater popping plugs.

Bottom fishing has been excellent and will remain strong for anglers targeting the 250-400’ range, and swordfish action is moving into its peak as well.

Ziggy, of Johnnie Mercers Pier, reports that good numbers of smaller spanish mackerel have been around for anglers casting jigs around bait pods. Schools of bluefish are mixed in with the spanish.

Anglers fishing live baits off the end are landing a few good-sized king mackerel (to 42 lbs.).

Bottom fishing has been a bit slow, with red drum representing most of the action.