Matt, of Tex’s Tackle, reports that inshore fishing has been improving now that plenty of mullet are starting to move along the ICW and into the surf. This bait presence matched with water temperatures coming off their summer highs typically gets fish fired off.

Nearshore anglers are finding spanish mackerel fishing has been good while targeting schools feeding on bait on the surface.

Some schools of false albacore are starting to be mixed in off the beaches. Going into the later part of September, the albacore become even more common under bait and feeding birds.

Flounder and gray trout action at the nearshore wrecks has been strong.

Anglers looking to do some nearshore trolling are finding a mixed bag of king mackerel, barracuda, sailfish, and scattered mahi from the 80’ range out past 23 Mile Rock.

Gulf Stream trolling has been relatively slow with all the hot water around. A variety of sailfish, mahi, and a few wahoo make up the catches for those making the long run.

Offshore bottom fishing has been consistent with grouper, large amberjack, triggerfish, and snapper all being landed. 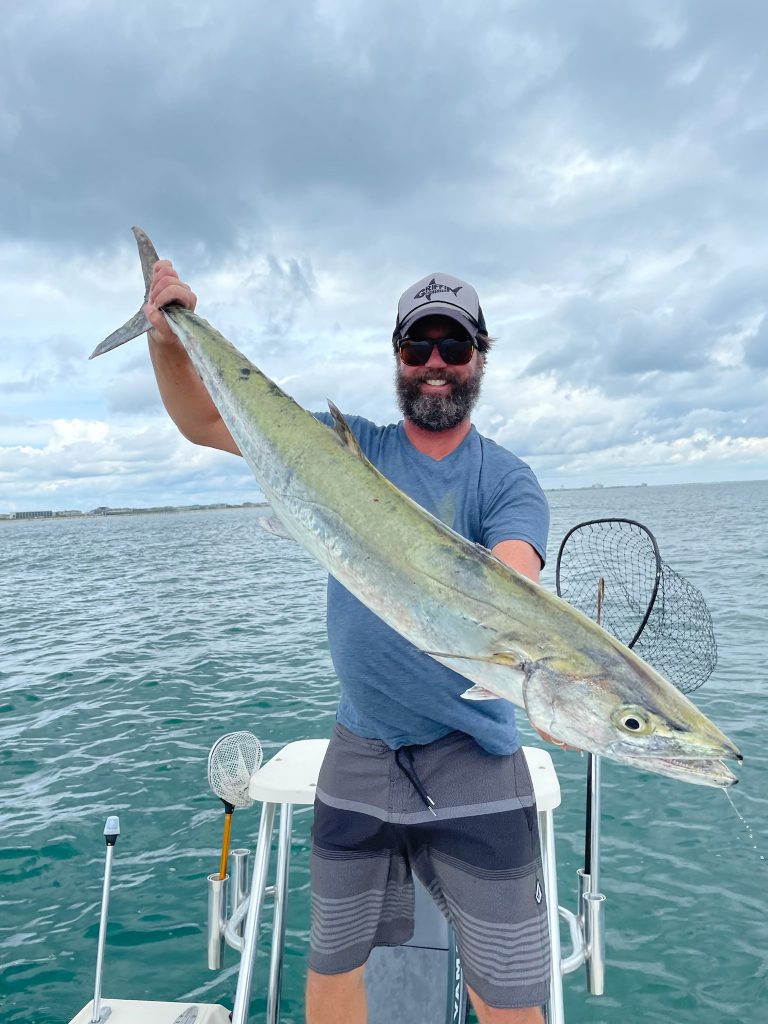 Wynne Harrington with a king caught on a live pogie at the Wrightsville Beach jetty. He was fishing with Capt. Jason Shi of Simple Life Fishing Charters.

Andrew, of Intracoastal Angler, reports that nearshore anglers are seeing good spanish mackerel action from the beach out to the nearshore reefs. Generally, the schools have been holding deeper with the high water temperatures.

King mackerel are still holding mostly in the 15-25 mile range. Of course, a few scattered fish are being caught in close, but as more bait moves along the beach, the schools work their way in. Trolling deep diver plugs, live menhaden, or skirted cigar minnows have produced strikes.

Bottom fishing anglers have been doing very well on grouper in the past weeks. The offshore structures tend to hold most of the action through the summer months.

Offshore trolling has been scrappy with the water temperatures so high. A few good-sized wahoo, some sailfish, and scattered mahi make up the bite.

Inshore anglers are catching strong numbers of red drum around ICW docks and in marshes behind the barrier islands.

Flounder are also being caught in good numbers. Most of the inshore action is from anglers bouncing soft plastics and fishing Carolina-rigged live baits around docks and deeper grass banks.

Luke, of Coastline Fishing Charters, reports that inshore flounder fishing has been fantastic and should continue to improve. The flatfish have been taking an interest in just about every Carolina-rigged live bait offering. Targeting areas along grass banks, in deep holes, near oyster bars, and around boat docks has been successful in getting strikes. Off the beaches, the nearshore flounder bite has been just as good. Fish close to the ledges or structure with bucktail jigs or live baits to get crushed by the flatfish.

Back inshore, the sheepshead bite is solid. Fiddler crabs fished around the area’s bridges and other hard structures are getting their attention.

The redfish action has been just about wide open. The reds are aggressively striking topwater plugs for anglers getting out on the water early in the morning. Z-Man soft plastic shrimp and cut baits have also produced plenty of action. Target areas around grass banks and deeper holes with nearby structure.

Spanish mackerel fishing has been decent, with schools busting on bait in the early mornings. Casting spoons and jigs to these frenzied schools tends to be very productive this time of year. 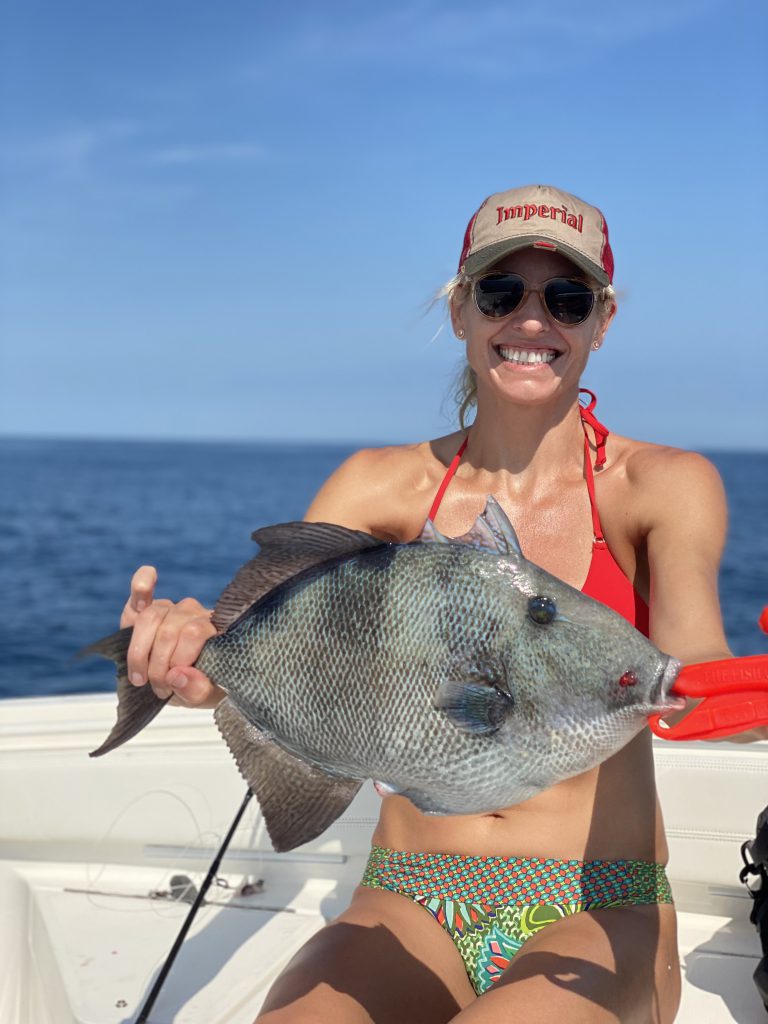 Whitney Scott, of Raleigh, with a 4.6 lb. triggerfish that fell for a piece of cut bait while fishing offshore of Wrightsville Beach.

Rick, of Living Waters Guide Service, reports that summertime bottom fishing at the deeper offshore structure has been very productive. Grouper, with mixed yelloweye and red snapper, are actively feeding despite the hot water temperatures.

Gag grouper are slowly moving closer to the beach, as they are currently feeding in the 60-90’ range.

Closer to the beach, king mackerel are holding over structure anywhere in the 10-30 mile range.

Patrick, of Johnnie Mercers Pier, reports that a good amount of ribbonfish have been showing up in the counts for anglers fishing cut baits or small pinfish.

King mackerel are being spotted around the live baits, though the kings at times have had a little case of lockjaw. A few blacktip sharks have hit the king rigs and been landed/released as bycatch.

Bottom rigs are producing spadefish, smooth pufferfish, and spot, and speckled trout are being caught closer to the breakers in the morning.

Spanish mackerel action has been good, with evenings recently out producing the earlier hours. Gotcha plugs, especially with a green head color pattern, have been a favorite.

Some nice flounder (to 18”) are hitting Carolina-rigged live baits.