Early spring redfishing can sometimes be dictated by what you can do instead of what you want to do, and such was the case when I met up with Capt. Chadwick Crawford of South End Anglers who operates out of Topsail, Hampstead, and the surrounding areas.

Our plan back when putting the late March date in the books was to take his skiff out to some skinny water and sight cast to schools of reds easily visible in the gin-clear, early spring water. That plan had to be saved for another day, though, when we saw that the forecast was for a wind that would be blowing a little too hard and little too steady for sight casting opportunities in shallow water.

Our Plan B was how many an early spring redfish trip goes, as spring on the NC coast has become synonymous with windy conditions—we would start our day on some docks that Chadwick had found to be productive over most of the winter months. 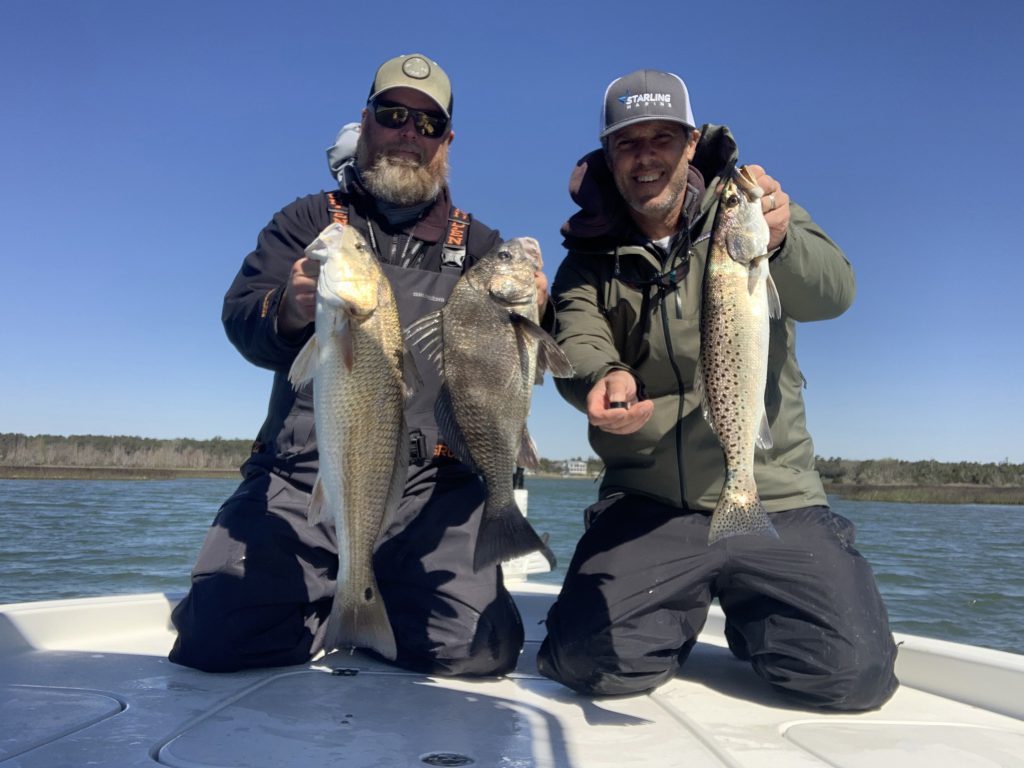 Capt. Chadwick Crawford (left), of South End Anglers, and Gary Hurley with a representative assortment of their morning catch. They found their reds and blacks off an ICW dock and the trout in a deep water boat slip.

“The redfishing this time of year is a mix,” Chadwick explained as we slowed down well in advance of the long dock he wanted to target first. By late March many of these larger schools of reds have been the target of plenty of attention week after week, so it’s important to be as stealth as possible, even when dock fishing.

“Either docks or back shallow in the marshes is where the fish can be found,” he continued, using the trolling motor sparingly and letting the wind do more of the work of getting us into position towards the deep end of the dock. “There’s not a whole lot between due to the lack of baitfish.”

Our tide was about halfway into the rise, and at a reasonable distance he Power-Poled the boat down. In the current, the bow swung out in the direction of the dock.

“They [red and black drum] pulled in here in late December,” Chadwick told me as he pulled out a couple of rods rigged with some soft plastics. “Right around New Year’s they started showing up here, and their numbers have increased.”

Neither Chadwick nor I was interested in playing a straight numbers game of how many fish we could hook, so he wanted to at least start our day with the challenge of throwing artificials. He pointed to one of the corners at the end that featured a gangway, and he instructed me to start there. He would begin by trying an area a little bit closer to shore and hoped that between the two of us we would find fish.

After a couple dozen casts each, neither of us gotten even a nudge.

“If the water creeps up towards 60 degrees, we’ve caught them on jigs. Once it hits 60 degrees and warmer, they get a little more adventurous and start looking around,” said Chadwick, and then in the next sentence he explained that our current water temperature was 56-degrees and so he was switching over to fresh shrimp on a knocker rig.

His knocker rig is simple. He uses 30-40 lb. fluorocarbon leader (strong leader to pull fish away from the pilings and fluorocarbon to help with wary fish), ties on a 4/0-5/0 circle hook, and starts with a 1/4 oz. egg weight that can slide along the leader right up to the hook knot.

I say “starts” with a 1/4 oz. egg weight because after a few casts he graduated me to a 3/8 oz. The increase in weight was more about the castability (trying to battle the wind to get the bait in position from our spot that was far enough away not to spook any redfish) and not about holding bottom.

I was encouraged to put my casts up tight to the pilings because, as Chadwick continued, “They stay pretty tight to the pilings. There’s a little bit of food there for them on those barnacles, be it tiny grass shrimp, mud minnows, little worms, and vertebrates and stuff.”

Since we were already up current from the dock, our shrimp was sending a smell underneath the dock and attracting fish holding on the pilings.

Our shrimp didn’t have to sit long before a tap or two was followed by a pull down, or in some instances just a pull down with no taps. We had found the reds, and in between bites, our conversation wandered to questions about why one dock holds fish and not another.

Of course, some docks have more traffic, with kids and dogs and adults more often making noise, and sometimes work being done on the dock will keep the fish away, but at times there just seems to something immeasurable to our observations that can explain a new class of fish on the same dock last year, five years ago, and 10 years ago.

There were no answers—just theories. 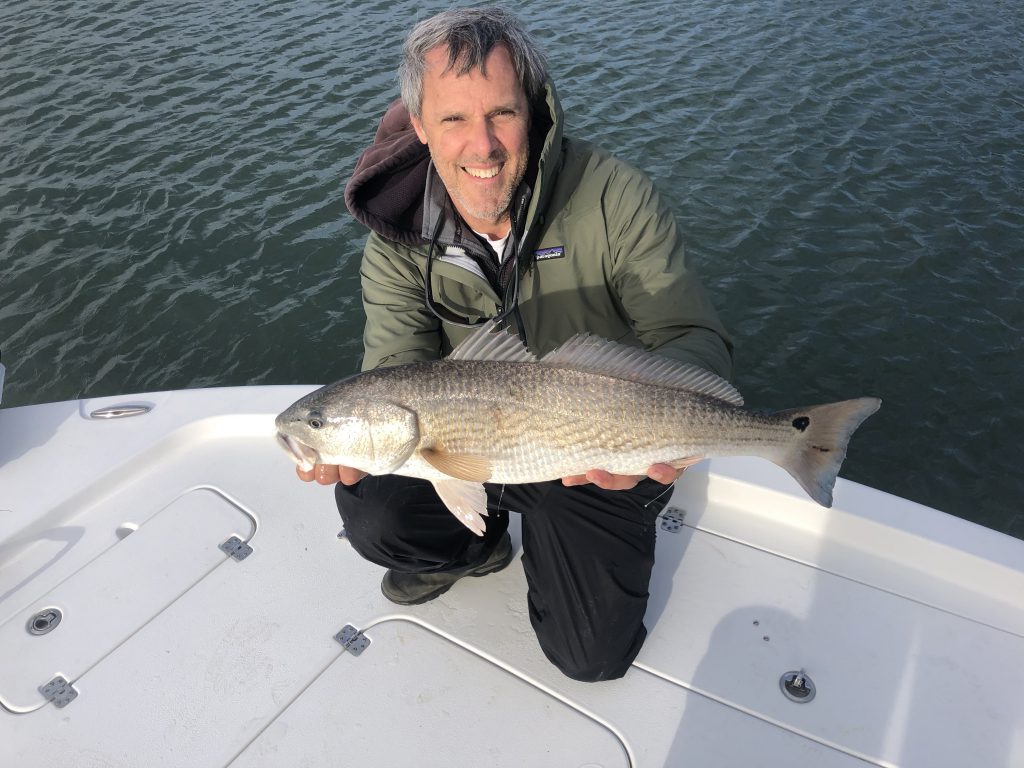 Gary Hurley, of Fisherman’s Post, in the standard “no surrounding clues as to what dock we are fishing” pose with a redfish caught in the Topsail area on a piece of shrimp. He was fishing with Capt. Chadwick Crawford of South End Anglers.

While we started by targeting the end of the dock, as the tide continued to rise, we kept on adjusting and hitting sections of the dock closer to shore. Our fish weren’t staying on one section of the dock—they were moving with the changing water depth.

And while Chadwick has found the tide migration of redfish to be true on a dock on the western side of the ICW and subsequently a long dock to reach from shore to the deeper water, the same isn’t true for the shorter docks on the sound side of Topsail Island and in the canals. Chadwick has observed, “Those fish tend to be where they want to be and they won’t migrate up and down.”

If you need an early season reason to get away from virtual worlds and spend more time in the natural world, then a spring redfish trip with Capt. Chadwick Crawford of South End Anglers in the Topsail/Hampstead area would be a strong move in the correct direction. Wind or no wind, Chadwick has places that produce.

And if the question of why one dock and not another doesn’t do it for you, then you can always tackle “Is there a pattern behind prime numbers?” or “Will we be able one day to download our brains into computers?”