Those of you with kids will easily understand…June’s Tidelines featured my oldest and July’s my youngest, so I am grateful that Capt. Johnathan Garrett, of On Point Charters, took a half day break from his busy summer schedule to put my middle son James on a Tidelines-worthy trip.

A significant weather front had moved across the coast the two days prior to our scheduled meet up plan of Friday morning at Casper’s Marina in Swansboro, and so Thursday evening we decided to wait until the morning to see how much rain and wind was still in the area before making the final decision to go or not.

At 6:30 am we determined that the rain was just about completely cleared and the wind though up was still fishable, so James and I swung by to pick up Jackson, his soccer buddy, and a little over an hour later we were loading our cooler of food and drinks into Johnathan’s Pathfinder and idling away from the docks headed to a shallow bay just a short run down the ICW.

“With all the rain and wind,” Johnathan explained to the boys, “the water is going to be too dirty to be very productive with artificials, so we will at least start out looking for redfish using cut bait.” 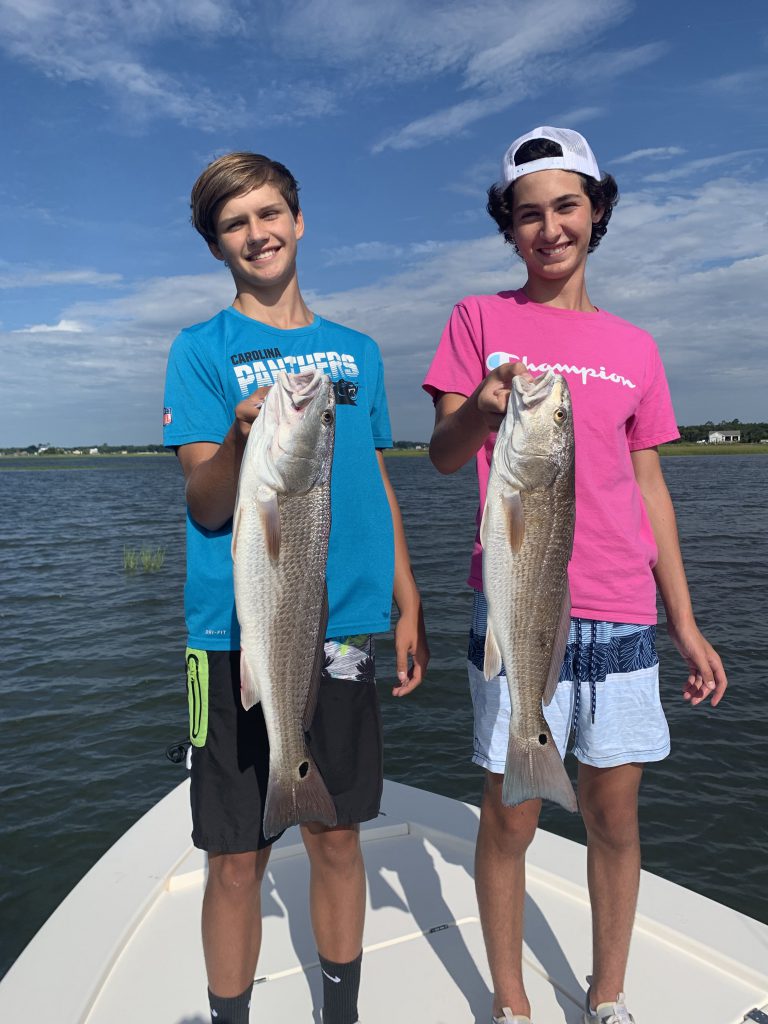 James Hurley (right) and Jackson Rehrey with beautiful redfish (and beautiful smiles). Their fish came from a shallow bay in the Swansboro area while soaking cut menhaden with Capt. Johnathan Garrett of On Point Charters.

We made a left turn between a couple of grass banks, came off plane, and Johnathan deployed the trolling motor for the rest of the 100+ yard stretch to a point on the far side of the bay where he had caught fish in the days prior to the inclement weather.

“With these size pogies, I can get two good-sized baits,” Johnathan told the boys. They had moved to the back of the boat to watch him cut the 5” pogies with a pair of scissors. He would first cut off the head and tail and throw them overboard, and then the remaining body piece was cut in half.

Johnathan slid one of the cut baits halves on a circle hook that sat about 6” below a 1 oz. weight. He then cast the rig out to within four feet of a point of flooded grass, and finished the simple spread by fan-casting two other baits to cover other nearby sections of the shoreline.

Sometimes a kid’s attention span can be challenging in the wait-and-see approach of soaking bait, but there’s little challenge when the first bite comes in no less than three minutes. The rod that had been cast in the middle of grass barely showing above the water’s surface suddenly bent down, and the sound of drag and the subsequent commands from both Johnathan and I for one of the boys to grab the rod filled the boat.

James got props from Johnathan for being the first to the rod, but he got joked by me for not being a good host and letting his guest Jackson fight the first fish. If that first red drum had been our only fish of the day, then the joke about being a good host may have turned into more than a joke, but fortunately for us, the red drum action never waned all morning.

We may have had one or two red drum measure out in the 18-inch range, but most by far were right around the 24-inch length. Our upper-slot red drum, weighing in anywhere from 4-6 pounds, were all feisty and put on great pull-and-tug battles.

The repetition of fighting red drum after red drum allowed both Jackson and James to work on their fish-fighting skills. They each improved at putting pressure on the fish early in the fight to keep it from heading to a set of poles and some oyster rocks that could have been potential break-offs, and they also got much better at turning the fish when close to the boat, whether to keep it away from Power-Pole and/or to ultimately guide it into the waiting landing net.

The boys also improved in their fish photo skills, and not just in the hold-the-fish-out-farther-to-make-it-look-bigger sense. In the steady rush of hooking fish, fighting fish, landing fish, and releasing fish, often with two hook-ups going at a time, I sent Jackson’s parents a photo of his first red drum on the morning without looking closely enough at the photo. Jackson’s grumpy mug in no way reflected the good time the boys were having with Johnathan.

We needed a photo redo to set the record straight. Fortunately, Johnathan was giving Jackson plenty of fish for practice, but it only took Jackson one more fish and one more photo to capture a better smile. 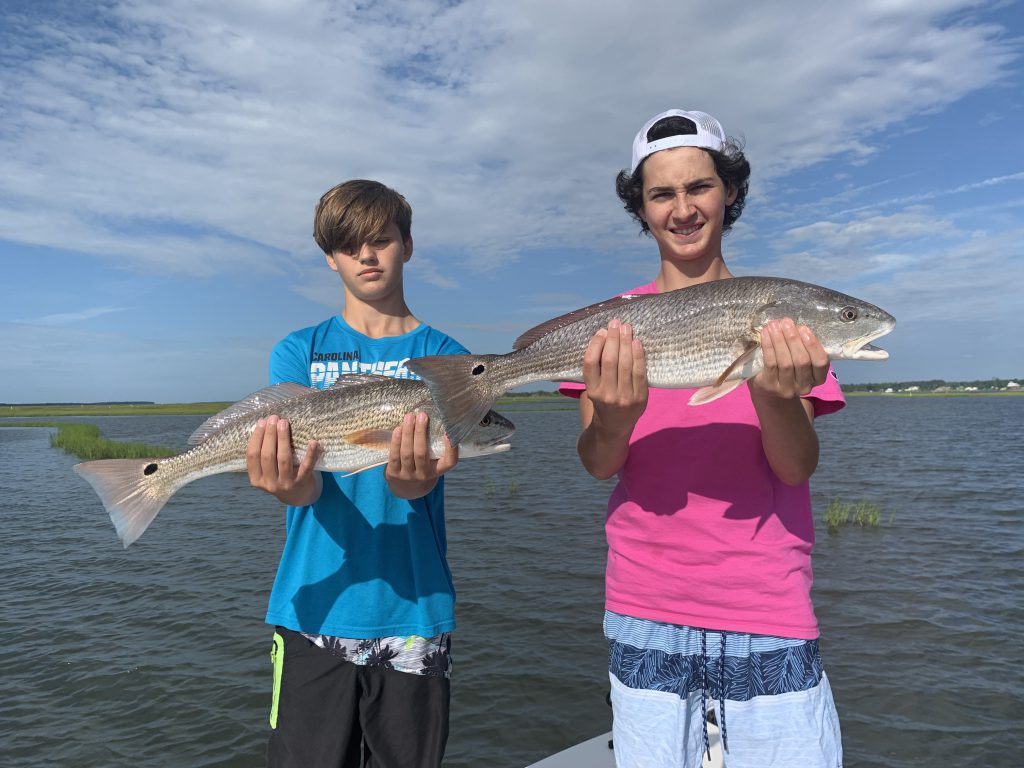 James Hurley (right) does a little better than Jackson Rehrey (left) in smiling for the camera while holding up one of the many upper-slot red drum the pair hooked. They were targeting some flooded grass with cut bait while fishing with Capt. Johnathan Garrett of On Point Charters.

While Capt. Johnathan Garrett, of On Point Charters out of the Swansboro area, targets red drum more than any other species in the summer months, he enjoys playing the conditions. For our windy day, that meant bait instead of artificials, but if the wind had laid, then we might have been out in the ocean live baiting for big spanish mackerel, or even heading further off the beach for kings and chances at cobia and grouper.

You can find out more about all of the different ways Johnathan can put you and your guests on any number of species by visiting him online at www.onpointfishing.com, or give him a call at (252) 670-4523.

I predict that, like us, you will return to Casper’s Marina with photos, memories, and a few fish in the cooler. And don’t forget to smile for the camera. Remember…fishing and catching fish is fun.