My late fall has been peppered by fishing trips that had to be cancelled for one reason or another, so it was with at least a small sense of urgency that I reached out to Capt. Dale Collins, of Fish or Die Charters out of Swansboro, asking if he had any availability over the Thanksgiving weekend for us to put in half day fishing trip for the purposes of a Tidelines column for the big winter issue. 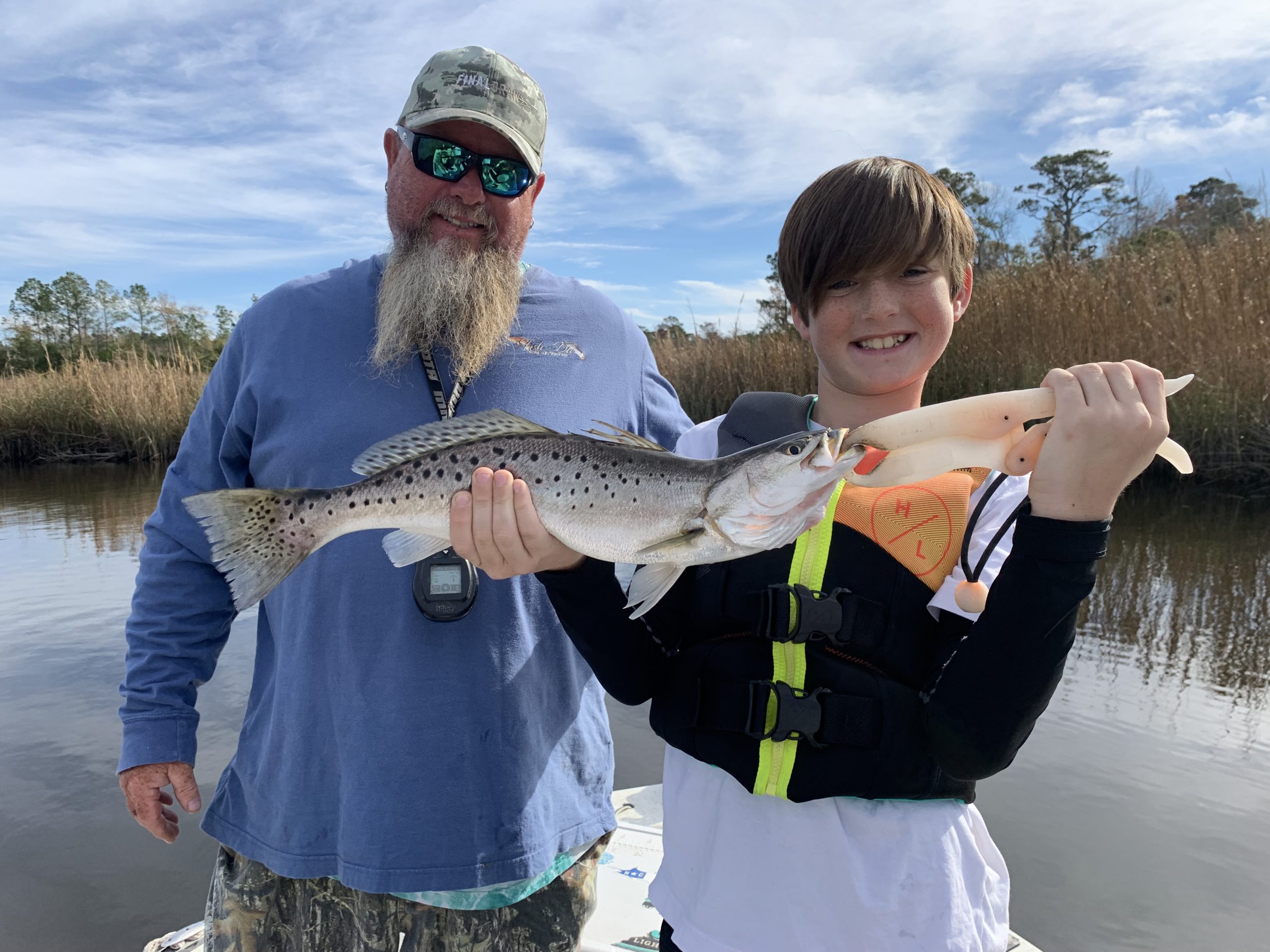 Ethan Hurley holds up his first speckled trout of the day. He hooked the trout on a Billy Bay Halo Shad while fishing with Capt. Dale Collins (left), of Fish or Die Charters out of the Swansboro area.

Dale targets red drum (and flounder) for the majority of the fishing season, but beginning in September, the speckled trout bite takes center stage. By late November, when I had called on him, he’s moved his trout efforts out of the main bodies of water and into the smaller creeks in the area.

Dale gave me two options—we could meet at 5:30 am for an early morning trip to take advantage of what he predicted would be the better bite of the day, or we could meet at 11:30 and fish the slack low tide and the start of the rising, a period he thought we could find fish but perhaps not in the same numbers as the morning.

Ethan (my youngest) and I went over the pros and cons, but it was a short discussion. For a nine-year-old, or at least for my nine-year-old, getting up at 3:30 am to leave Wilmington by 4:00 to get to Swansboro by 5:30 didn’t make much sense, especially, as Ethan clearly rationalized it, if the morning fish would still be there in the afternoon and we just had to work a little harder to get them to bite.

Dale meets most of his clients at the new Pogie’s location, a space right on Highway 24 just after the first bridge headed north from downtown Swansboro that has plenty of room for bait and tackle, kayak sales and rentals, and dock space for a vast array of both guided and unguided trips. Our afternoon destination was the Narrows of Queens Creek, and though the run was a short one from Pogie’s, Ethan and I put on all our layers and settled in for the ride.

We made our way under the bridge and past the waterfront houses to a couple of holes far up the creek where Dale and a buddy of his had caught some trout in the days prior. These first two holes were in bends in the creek where the water dropped from about 5’ deep to 9’.

“The area holds a lot of bait in the winter that the trout like to eat,” Dale explained as he adjusted the bobber depth on a rod he was prepping for Ethan. “It’s warmer water than what’s out in the sound. The black mud on the bottom gets warm, and the trout come up here to eat and stay warm.”

A cooler turned live well in the front of the boat held some mud minnows, and Dale pulled one out and put it on the hook for Ethan. He then told him to cast out to the deeper water. 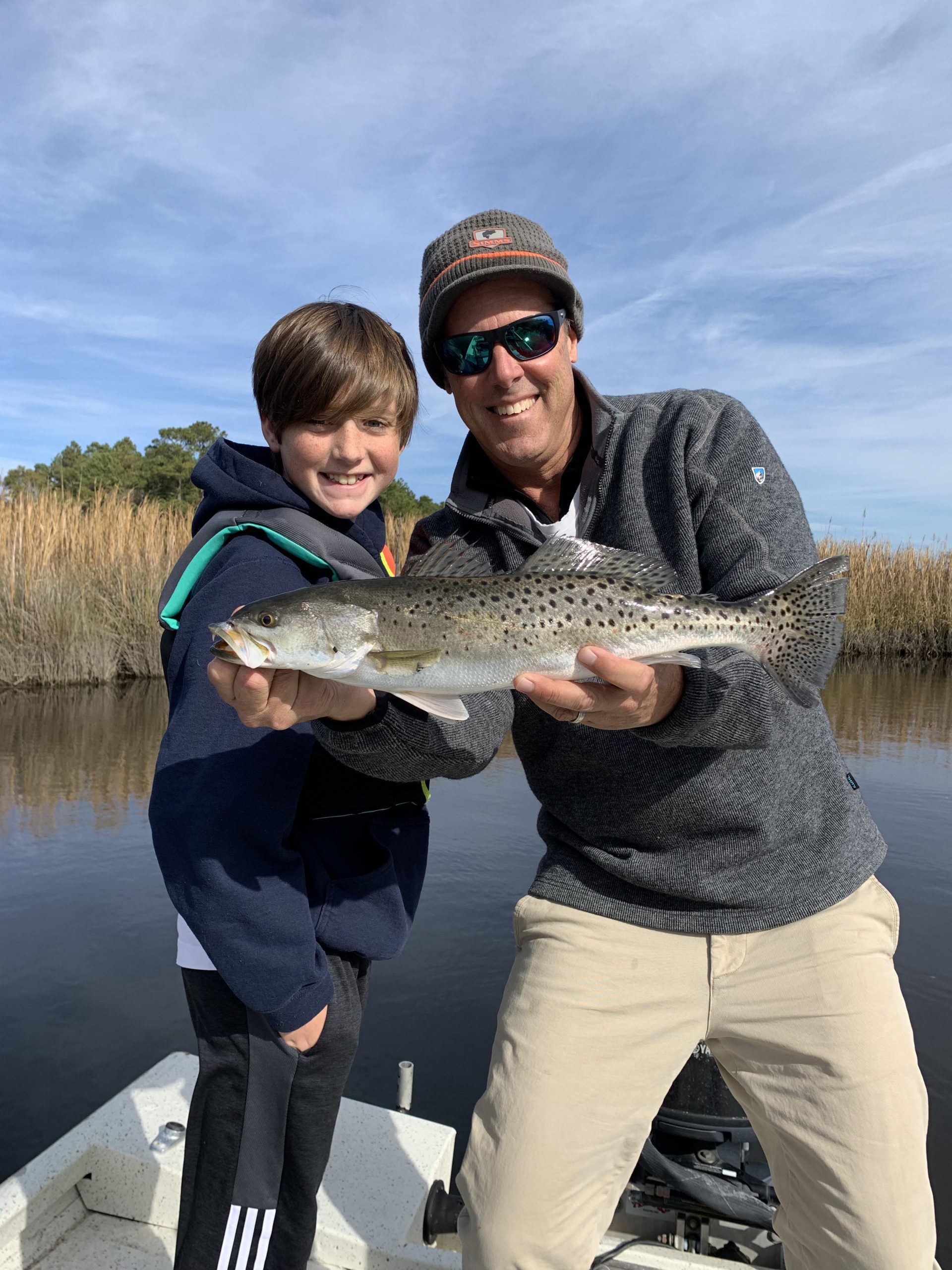 Gary and Ethan Hurley pose with a mid-afternoon trout that fell for a Zoom golden bream soft plastic in the Narrows of Queens Creek. They were fishing with Capt. Dale Collins of Fish or Die Charters.

The rod Dale handed me held his favorite soft plastic for trout—a Zoom golden bream. The 5” bait was attached via a 1/8 oz. Caraway jig head and a stretch of 15 lb. Yo-Zuri pink fluoro. My instructions also included targeting the deeper water, but he added, “Winter bite is in effect. Cast it out and let it hit the bottom, and then bring it back in very slowly. Don’t move it much at all.”

While Ethan’s bobber was quiet, my Zoom bait quickly generated a hard and heavy bite and some quick head shaking, but then a few cranks into the retrieve, the bait pulled free.

While any trout bite is fun, a trout bite with no fish over the rails meant no fish photo for an article, but at least we confirmed there were fish in the area that were willing to eat. Dale had been a little concerned about the high-pressure system moving through. Fish theories abound, and one fish theory is that high pressure causes the fish bladder to swell, putting pressure on the fish and making the fish hesitant to bite.

I quickly threw back out to the same spot and started the same slow retrieve.

The second bite wasn’t immediate, but just a few casts later I came tight to a speck that would measure out at 18”.

We took a couple of fish photos, and then took a couple more fish photos just to be sure before releasing our first speckled trout of the afternoon. There may have been a small pause of relief, knowing that the problem of a Tidelines article was solved, but our fishing time with Dale had really just started. Ethan and I went back to work.

Ethan’s bobber stayed quiet, and our first deeper hole only produced a couple more smaller trout, so Dale started the process of wind drifting and using the trolling motor to cover water to find more fish.

Ethan’s bobber rig was retired, since even the smaller trout at the first hole didn’t give the mud minnow a look. Dale handed him a Billy Bay Halo Shad in the tiger color, a paddletail bait that comes with simple instructions for the novice angler—no jigging or popping necessary, just a slow and steady retrieve.

Ethan’s paddletail took a handful of casts but then generated his first trout of the day. The fish came from a straight stretch of the river with a relatively consistent depth, and that’s how the rest of our afternoon went. Sometimes we found trout (and black drum and red drum) where Dale predicted we would find trout, and sometimes the bites came from areas of the creek that we thought we were passing through to get to the next “spot.”

Capt. Dale Collins, of Fish or Die Charters out of Swansboro/Emerald Isle, will be targeting trout in area creeks through the end of January, and then in February he shifts to running the marshes looking for winter schools of red drum that he can sight cast to.

If you find yourself with your own small sense of urgency to put some fish in the boat, you can check out Dale at Fish or Die Charters on Facebook (facebook.com/fishswansboronc) or give him a call at (252) 422-4326.

Which will you choose? Get up earlier and work less, or wake up later and work harder? I think either one is the correct decision.