I went on several strong fishing trips in June, each one that could have easily been a Tidelines article, but my favorite trip of the month was one where I didn’t catch a single fish.

My two oldest boys have made several appearances on Fisherman’s Post trips, so I thought it was time for Ethan, my youngest at nine-years-old, to have his own day, and I knew that Capt. Tommy Mungo, of Mungo Fishing Charters out of the Wrightsville and Carolina Beach area, was good at getting kids involved and catching fish while never forgetting that young kids having fun is way more important than a fish count.

I know what many of you know—kids like doing activities with their buddies. Fishing is no different, so I had Ethan invite Lee, one of his friends, to join us. Since Lee’s father Walker is a fishing fan, too, the four of us headed to a 6:30 am meet up at the Fort Fisher boat ramp, where Tommy meets most of his trips in the summertime months.

For those who bemoan the high boat traffic on just about any day on the ICW, the backwaters of the lower Cape Fear River are an immediate “win.” We made a quick run past the first set of rocks and then turned left into the creek channels where Tommy had been on some fish earlier that week, and we didn’t pass another boat.

I liked Tommy’s strategy—let the kids warm up (and wake up) on some bait-soaking first, and then later we would put the boys in a position where they would need to cast and retrieve.

The trolling motor was deployed, the spot lock was set, and two rods were cast off the bow of the boat into a current seamline that runs off of an oyster bar and drops quickly from 1-foot to 6-foot. Each rod was rigged with a piece of shrimp on a two-hook rig, and then Tommy put a live mud minnow to the right and towards a grass line. 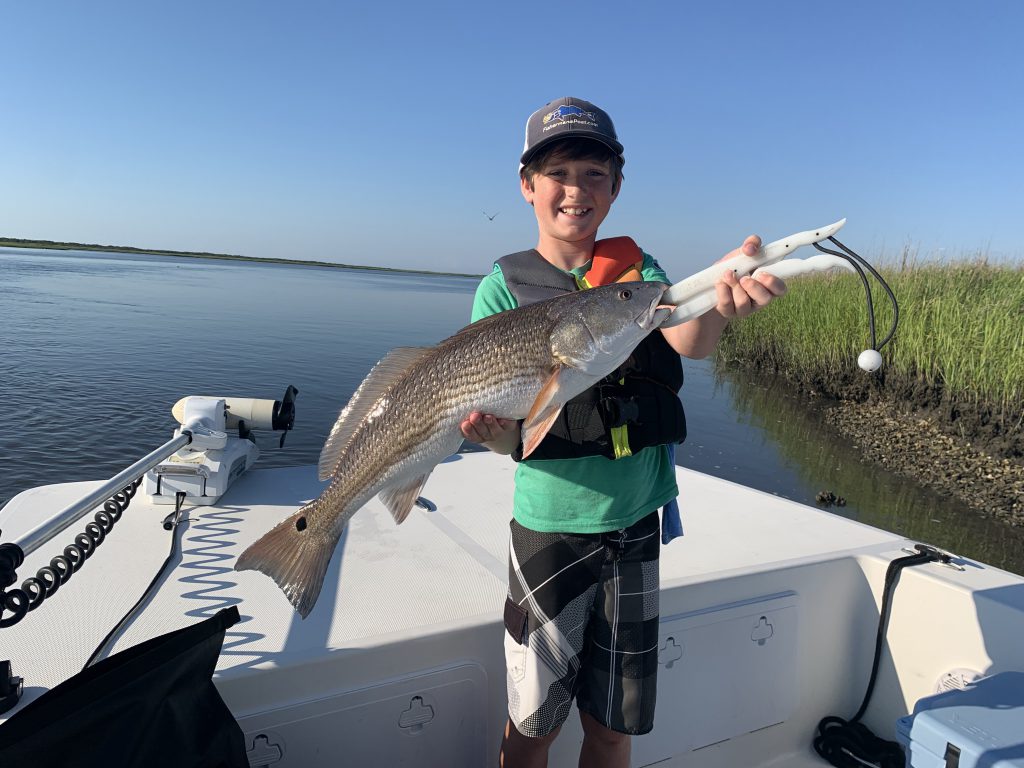 Ethan Hurley with a 26″ redfish that fell for a couple of mud minnows on a circle hook. He was fishing the lower Cape Fear River with Capt. Tommy Mungo of Mungo Fishing Charters.

Before the boys even had a chance to ask if they could have any snacks, because you know what I know when it comes to young boys and their snacks, the rods started producing croakers. Then one of the front rods bent down, and we all cheered Lee to grab the rod.

There was only a little drag pull, as the black drum was just a keeper if it was a keeper, but Walker and I made sure the celebration was big when Lee led the drum into Tommy’s waiting landing net.

The bait soaking continued, and this is part of Tommy’s plan when taking kids fishing. He calls it Stage One, and it basically lets him assess what skills he is working with so that he can determine how to successfully approach the rest of the day so that he challenges the kids without expecting too much and putting them in a position to fail and/or get frustrated.

While we watched the tips of the shrimp rods dance a little while the baits were getting pecked, wondering when one of those little dips would turn into another big bite, the live bait rod suddenly went way down and stayed way down.

Ethan was up. He moved to the rod quickly, and Tommy moved just as quickly to his side. The two of them got in position up on the front deck of the boat, and the red drum did its part, pulling hard and going on drag-peeling runs. Tommy complimented Ethan that he, as had been instructed earlier in the morning, was holding the rod correctly, his right hand just above the reel seat to generate leverage against a strong fish.

Ethan’s fish continued on typical red drum runs, and each pull of drag seemed to make Ethan both nervous and excited, but with a little help from Tommy (at times casually placing two fingers under the rod near Ethan’s hands to help lift), and with several “Reel! Reel! Reel!” encouragements, Ethan’s upper-slot, 6 lb. red drum went into the net.

Walker and I were again quick with a big celebration.

Bait fishing is fun and effective for kids (and adults) whose casting skills and attention spans are limited, and Tommy knows this, and he also knows that there’s an undeniable satisfaction to casting out an artificial on your own, retrieving and giving the artificial action, and then feeling the fish strike your artificial, setting the hook, and finding pride in knowing you fooled that fish to bite. 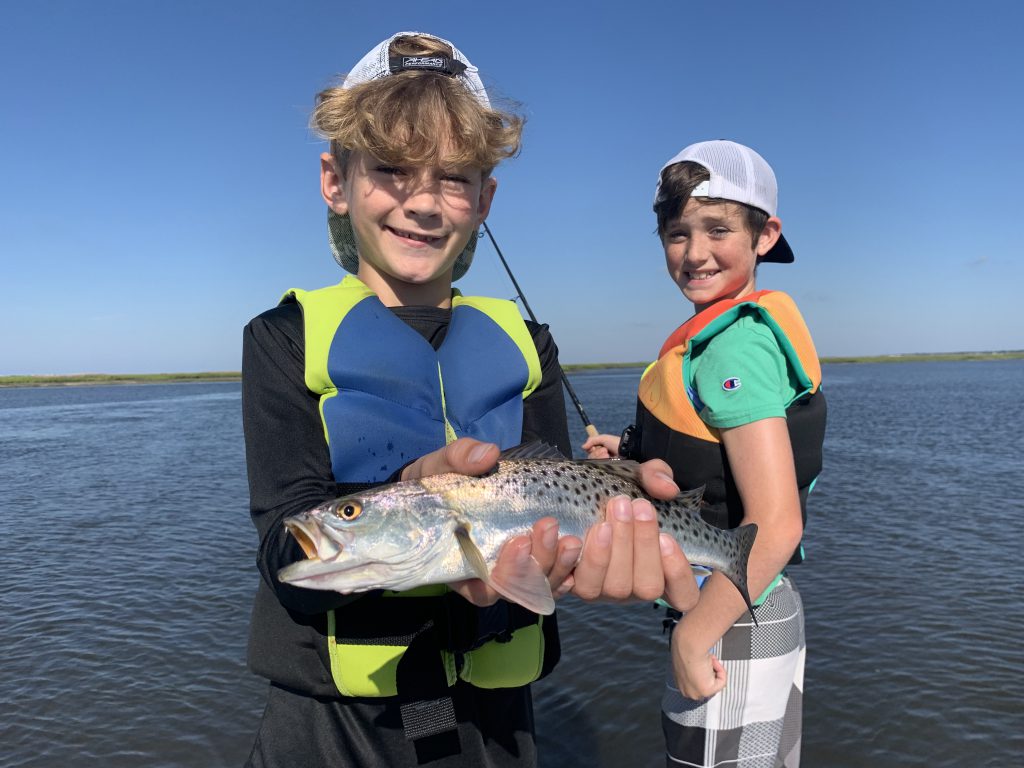 Lee Abney (left) with one of the summer specks he caught casting artificials into a current line where a sandbar drops from 2′ to 9′. He was fishing with Capt. Tommy Mungo of Mungo Fishing Charters.

At a relatively narrow channel between two grass islands where a big bay was dumping water on the falling tide towards the main river, Tommy took the two boys up front, each armed with jig heads and Gulp baits, and Walker and I stayed back. Yes, it took some casting instructions and practice to help them improve both their distance and their accuracy. And yes, they had to be reminded more than once to let the bait fall, make contact with the bottom, and then pop and retrieve, pop and retrieve, pop and retrieve. However, they each came tight several times to summer speckled trout, and all their fish—from cast to bite to net—came in unassisted.

I fibbed a little in the intro to this article, saying I didn’t catch a single fish, because I thought that statement made for a stronger hook to get you to read the article. Walker and I, fishing from the back of the boat, managed some trout and flounder, but he and I both found way more joy in the kids laughing, joking, eating snacks, playing with live bait in the livewell, catching fish, releasing fish, making memories, and (hopefully) starting on a life-long connection with the outdoors.

If you’d like to jumpstart your kids’ connection with fishing, or maybe jumpstart your own connection, then check out Mungo Fishing Charters at mungofishingcharters.com, or give him a call at (910) 616-1238.

Bring a buddy. Bring lots of snacks. And let Tommy handle the rest.