The attraction began when he showed up at the Fish Post office to film his first podcast.

Capt. Todd Skeen, of Shenanigan’s Sportfishing out of the Hampstead area, had been suggested as someone that would be a good guest to talk about grouper fishing, and within the first ten minutes, I was hoping, and I mean really hoping, that I would get a chance to fish with this guy that had just expressed the exact mantra that I repeat out loud on just about every bottom fishing trip I’ve ever taken.

“When I go bottom fishing, I go grouper fishing. Everything else is by-catch,” Capt. Todd Skeen said early in the podcast.

I’m sure those words in a similar fashion are uttered by many a fan of bottom fishing, but for me, those were exact words. 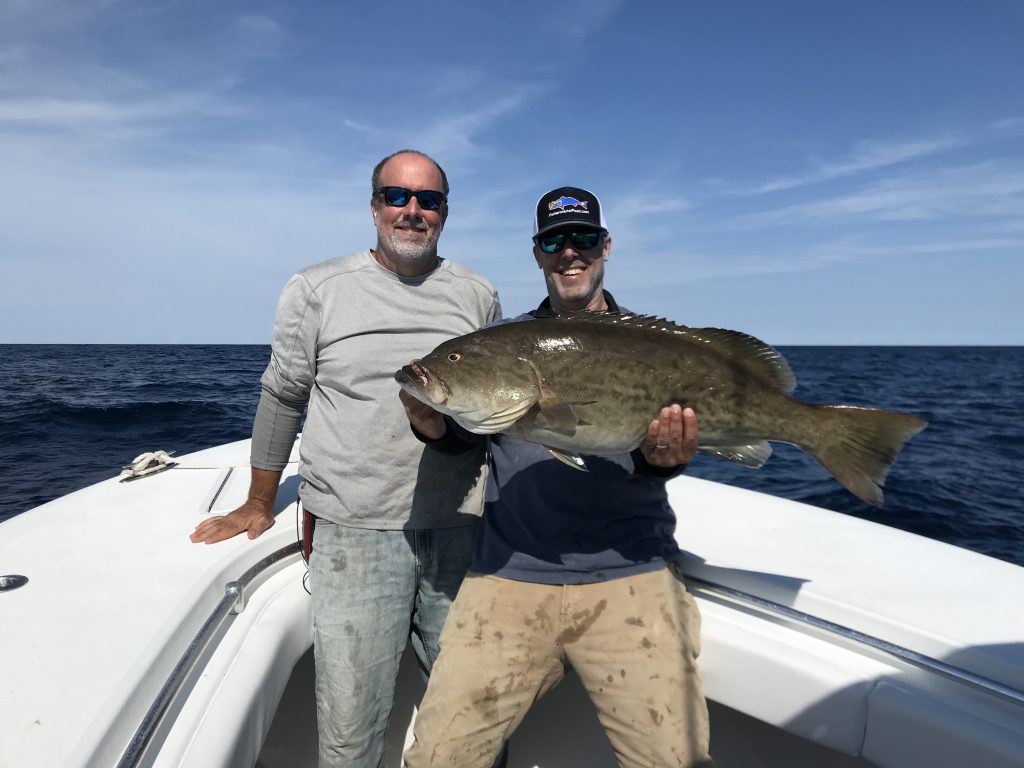 Gary Hurley holds up the 20+ lb. gag that he pulled off a ledge using half a Boston mackerel. He was fishing 25 miles out of New Topsail Inlet with Capt. Todd Skeen (left), of Shenanigan’s Sportfishing.

When we finished filming the podcast, Todd invited me to join him on a bottom fishing trip. The next morning, not wanting to seem too eager by texting too early, I made myself wait until it was after 8:00 am and then sent him several dates.

Though last year’s fall dates didn’t work out due to weather, our May date did work out, and Owen (oldest son), J.J. (brother-in-law), and I headed out to hopefully put Owen on his first keeper gag, as well as J.J. and I on one of our favorite fish to target.

Todd cleared New Topsail Inlet and pointed his 27’ Onslow Bay center console to an expansive set of numbers and marks in the 25-mile range. Owen was exhausted, being woken up pre-5:00 on a Monday morning after we had just gotten back from a Greensboro soccer tournament after 9:00 the night before. He tried to grab some sleep on one of the bean bags, and I quietly hoped that I hadn’t put too much pressure on this trip, rallying Owen with the siren song of this trip being as close to a guarantee as you can get when it comes to grouper fishing.

Prior to throwing anchor, Todd introduced the three of us to the competition he runs on his boat with every trip.

“The person who catches the biggest grouper,” he explained, “wins a Shenanigan’s Sportfishing spf shirt. The shirts aren’t for sale. You can’t buy one. The only way you can get a Shenanigan’s shirt is to bring up the heaviest grouper of the day.”

I basically wear plain t-shirts and only plain t-shirts. I rarely even put on my own Fisherman’s Post shirts, so the thought of wearing the Shenanigan’s shirt in theory wasn’t much incentive, but Todd’s competition approach worked. Suddenly I did want that shirt, as did J.J. and Owen.

We did a tour of some marks, with Todd closely watching the bottom reader for signs of promise. Then he saw what he wanted—there was a good area of hard bottom, identified by the stalactites extending down from the return on the bottom, and he saw closely packed colors of red not extending up into the water column but hugging the bottom.

I took a spot up in the front, and J.J. and Owen each grabbed one of the back corners. Todd armed us each with Star Plasma rods and Avet two-speed reels, and then he started providing us with an assortment of baits.

In my bucket, I first grabbed the cigar minnows, hooking them, as instructed, just once through both eyes. Then I mixed in dropping half of a Boston mackerel. There were also dead whole pogies and live pinfish to choose from, but I had the most confidence in the cigars and Bostons.

Our first fish over the rails weren’t gags. We brought up keeper sea bass and pinkies, and though we were there for grouper fishing and “everything else is by-catch,” those delicious, by-catch fish went in the box.

Owen got to warm his muscles up a little bit with amberjacks that took an interest in the live pinfish. I, too, found some amberjacks, and J.J. hooked the first shark of the day.

Todd flew the anchor a couple of times to check out some surrounding marks, and then we dropped anchor over a 5’ ledge that also had tightly packed red marks within 5’ of the bottom.

This time it wasn’t by-catch. This time J.J. was the first to bring up a keeper gag grouper. We all celebrated (quickly), a photo was taken (quickly), and Owen and I anxiously dropped back down to find our own keeper grouper.

Owen was next. The “machine gun” pecking of his bait on the bottom turned into something more significant, and Owen cranked down. The rod bent over, and Owen found himself in a stalemate of a battle. He would get maybe a crank or two of progress, and then his grouper would stall or even take back some of that progress. 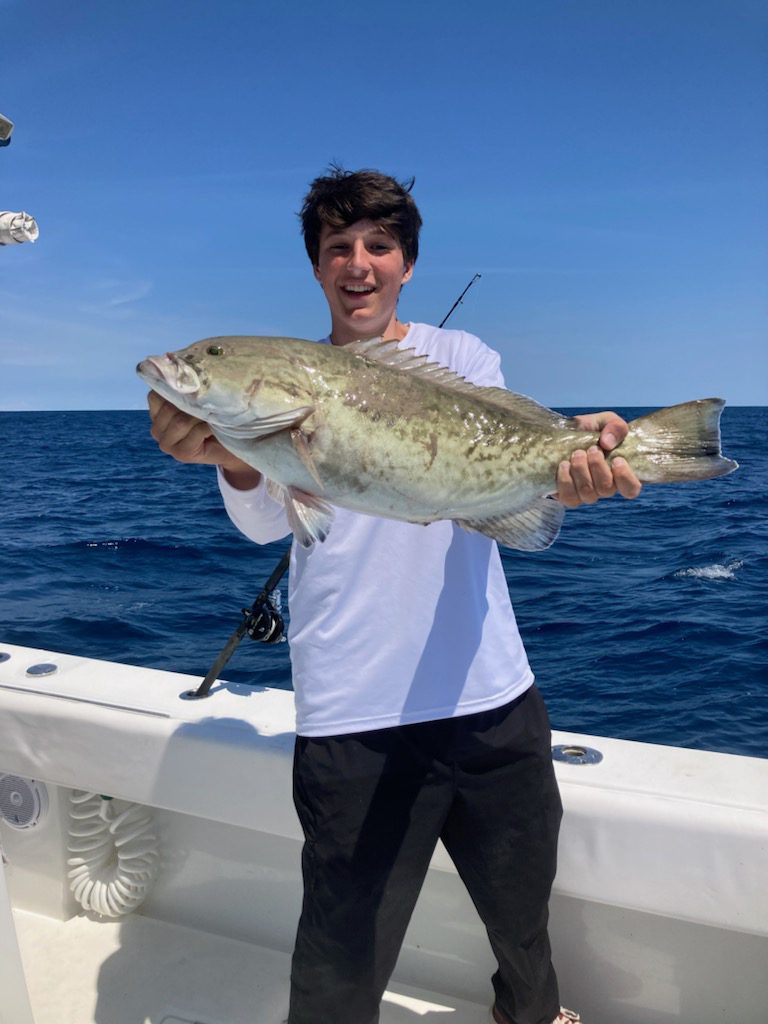 Owen Hurley with his ticket into the “Keeper Grouper Club.” His first gag was caught on a cigar minnow in 90′ of water off Topsail while fishing with Capt. Todd Skeen of Shenanigan’s Sportfishing.

Todd had already coached Owen on just how important the initial fight is with grouper—getting the fish up and away from the bottom so that you don’t get rocked—so Owen’s anxiety level was pretty high when very little progress was being made. Though it was big struggles for little progress, it was still progress, and soon the grouper was up in the water column and putting up less of a fight.

Todd didn’t gaff it, as he wasn’t 100% positive that it was a keeper, but it did measure. Owen, still adrenaline-rushing a bit, was officially in the grouper club.

Capt. Todd Skeen, of Shenanigan’s Sportfishing out of Hampstead, doesn’t want to take you bottom fishing. He wants to take you grouper fishing. And now that it’s after June 1, he can take you out for a day of targeting not just gags but scamps and red grouper, too, so I encourage you to visit him on Facebook or call him at (910) 632-4847.

Who won the shirt on our trip? That’s not important. The only thing important about our trip was that my oldest son landed his first keeper gag.

The fact that I easily won the shirt by bringing up a citation gag (20+ lbs.) isn’t important. The fact that my gag weighed almost as much as J.J.’s and Owen’s groupers added together doesn’t even need to be mentioned, because I’m not the type of father that takes a certain enjoyment out of reminding his oldest son that he still has some growing to do.