On some of my Fisherman’s Post trips with captains and guides, I’m able to invite family and friends along to join. Most everyone that gets invited on one of these trips knows that fishing is fishing—there’s no guarantee that you’re going to catch a bunch of fish, some fish, or even a single fish.

Still, it’s hard not to have high expectations when you’re going fishing with some of the best captains and guides on the North Carolina coast, and I know that and then feel added pressure for the trip to work out, as I’m the catalyst that has put the fishing plans in motion.

The setup for this article is just to state that expectations were high, and the pressure was there, when I recruited two of my brothers-in-law (J.J. and Tom) and a good friend of the family (Robert) to travel to Hatteras for an early season shot at some yellowfins.

The Oregon Inlet area traditionally has a consistent and world-class yellowfin run every spring, but such hasn’t been the case down in Hatteras. For many years, the only real yellowfin catches out of Hatteras came from longliners working the eastern side of the Gulf Stream. However, over the last couple of seasons, the yellowfins have been migrating through on the western edge, and that western edge was our hope when we booked Capt. Jeremy Hicks, of Calypso Sportfishing out of Hatteras Harbor Marina, for a yellowfin trip, with strong chances of blackfins and maybe a wahoo. 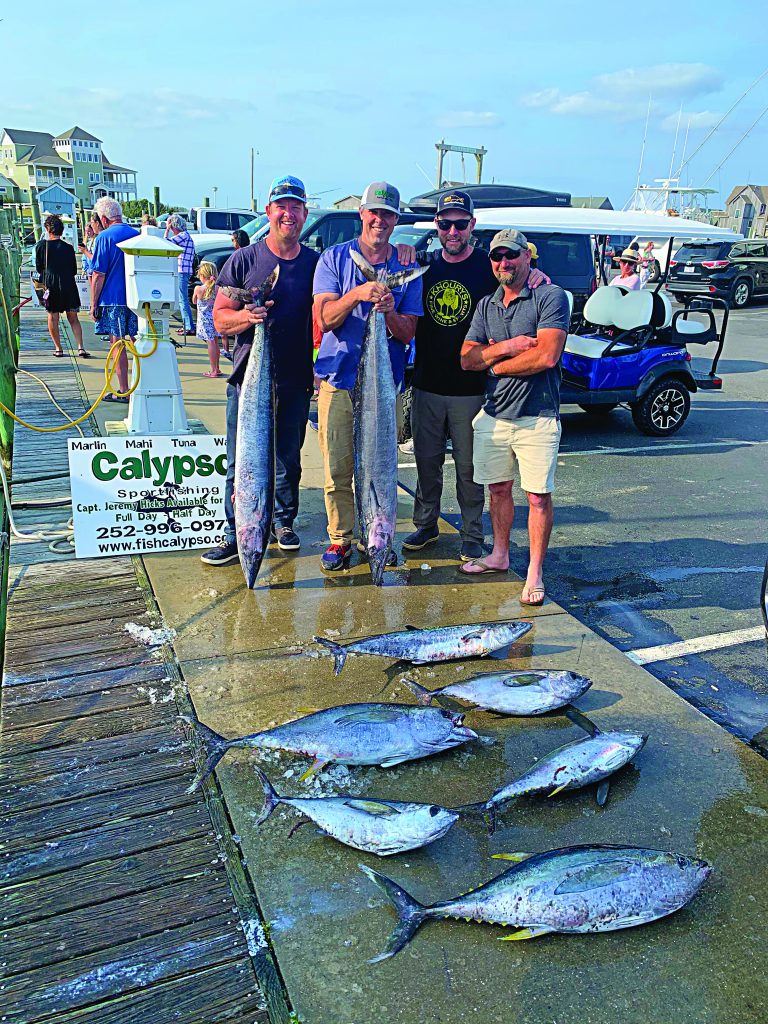 Tom Favor, Gary Hurley, JJ Khoury, and Robert Fedoronko with a catch of wahoo, yellowfins, and blackfins. They were fishing the break with Capt. Jeremy Hicks of Calypso Sportfishing out of Hatteras Harbor Marina.

For Jeremy, just like everyone who has decided that it’s a good idea to live, work, and run a business on a sandbar, the challenges of Hatteras life never cease, and for the offshore captains this spring, that challenge has included an inlet that needed to be dredged before any boats could reasonably make a safe run out.

Resilience and adaptability are standard for the Hatteras fleet, so the inlet issue was temporarily resolved by making the hour-ish run around Ocracoke, over to the Big Foot Slough, and then out Ocracoke Inlet.

At the time of this article, the Hatteras Inlet has been dredged and is open, but on the day of this fishing trip, we had a little extra down time on the run to 30 fathoms where Jeffrey Keifer, the mate, first deployed our spread.

Jeremy marked 71-degree water, and we were in the same space where he had found some yellowfins (mostly) and blackfins (a few) the day before, but our ballyhoo behind Sea Witches rigged on 80 lb. fluorocarbon didn’t find any immediate fish.

Jeremy’s strategy was simple—look for bait, which primarily meant bait marks on the machine, and target areas of good bottom that would typically be holding that bait. We worked to the south and covered areas of the break that went from 30 to 50 fathoms.

A slow start to an offshore trolling trip can cause the brain to ponder unproductive thoughts: the length of the drive, the cost of everything (fishing, hotel, supplies), the effort it takes in our busy lives to actually get out of town, the repercussions of taking that time off work when you get back to work, the repercussions of selling your wife on yet another fishing trip by promising fresh sashimi, and so on.

Then the planer rod went off.

J.J. was up first, he got in the chair, and Jeffrey handed over the rod, with line still going out on an impressive first run.

Our first fish of the day was a 50 lb. class wahoo. It might not have been the yellowfins we were targeting, but is anyone ever going to complain about a wahoo (except maybe some king mackerel tournament anglers)?

With our first fish, a big and delicious fish, in the box, the energy levels immediately changed. Maybe the universe picked up on our positive energy. Maybe the fish just decided to turn on at that moment in time. Maybe we finally got to the right place for that day. Whatever the explanation, that first wahoo was the start of steady bites throughout the rest of our time with Jeremy and Jeffrey.

The more popular rigs in the spread were blue and white Sea Witches with medium ballyhoo, and most of our bites came on the long riggers and shotgun lines (other than wahoo on the downrigger). 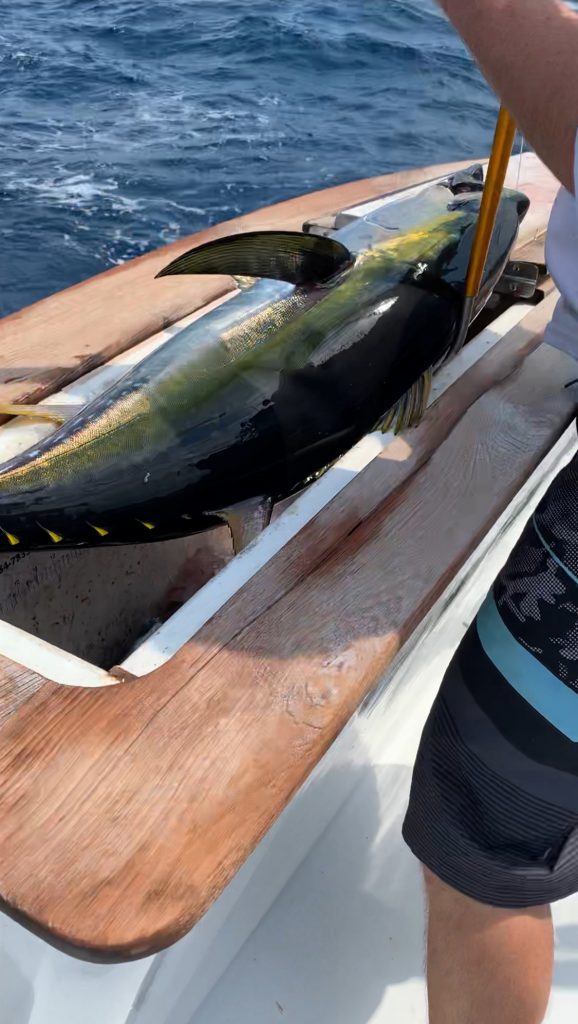 Mate Jeffrey Keifer, of Calypso Sportfishing, puts a 30 lb. class yellowfin in the box. The yellowfin hit a ballyhoo on a blue and white Sea Witch being pulled on the shotgun line in 30 fathoms off of Hatteras.

We no longer thought about hotels and drive time. We now thought about the taste test we were going to create back home by putting raw yellowfin, blackfin, and wahoo side by side on a plate to see which one is crowned the favorite.

Last year Jeremy enjoyed yellowfin action until the end of June. While this year looks similar to last year, Jeremy isn’t the type to oversell anyone on a fishing trip.

“These fish are hard to pattern,” he explains, often using the word “traditionally” to qualify his answers when asked to do the impossible—correctly and accurately predict fish activity weeks and even months in advance. “They have tails. They swim. They’re going to move.”

Capt. Jeremy Hicks, of Calypso Sportfishing out of Hatteras Harbor Marina, will be heading offshore any day he can to find the best available species on that day. While May offers tuna options (and surprisingly good wahoo action so far this year), it’s also the month that traditionally brings in the best mahi bite, both in sizes and numbers. Then June is when the billfish bite gets hot, too.

You can check out more on Capt. Jeremy Hicks and Calypso Sportfishing by visiting www.fishcalypso.com, or you can give him a call at (252) 996-0977. He’s back to running out of Hatteras Inlet, and that means even more fishing time to find both the day’s target species and the long list of anything else that might surprise you when you’re fishing out of Hatteras.

My biggest surprise on this trip? Yellowfin beat out wahoo and blackfin in the sashimi taste test. I predicted them to finish in third.