Jamie is one of the few Wrightsville guides that likes to target trout throughout the year, often putting clients on summer slams of flounder, redfish, and trout. However, like just about every trout angler in North Carolina, the late fall (and winter and early spring) are when trout take top billing over all other species. 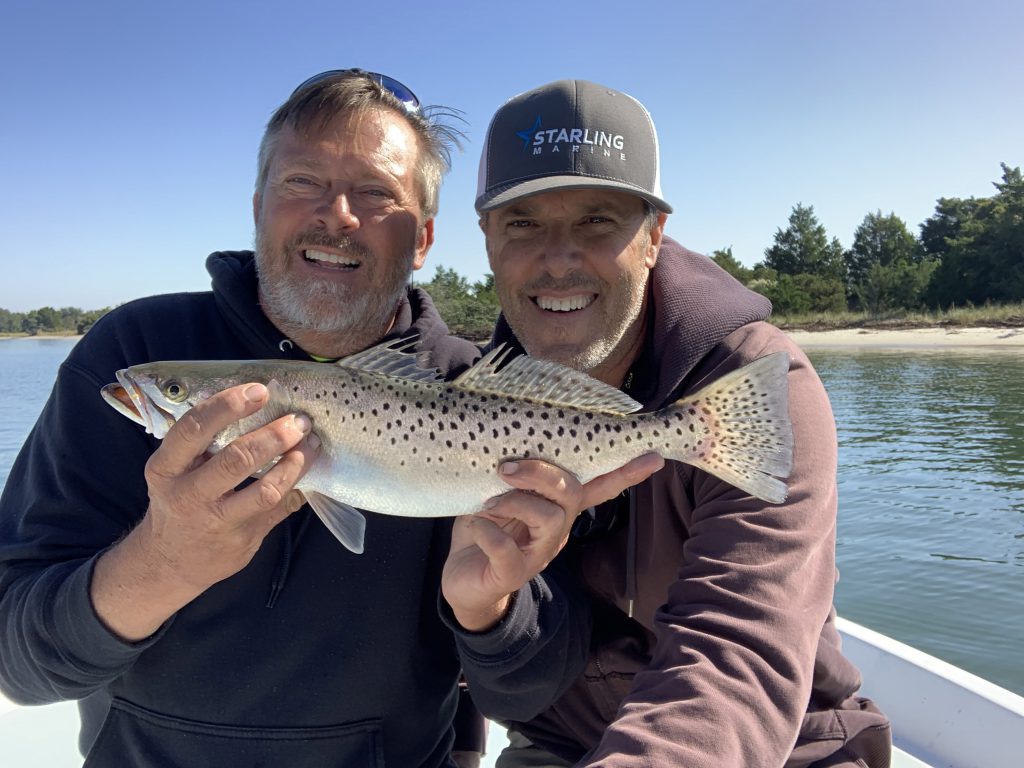 Capt. Jamie Rushing (left), of Seagate Charters, and Gary Hurley with a mid-October trout caught on a Yo-Zuri Crystal Shrimp behind Masonboro.

Typically, Jamie finds that the trout appear in numbers first in the Carolina Beach Inlet (perhaps at their best right around Halloween), and then they head north up the ICW and begin populating those little spits of water than run off the backside of Masonboro out to the ICW.

No trout were active in the inlet, so we headed around the corner to try one of the little runoffs, and the first little creek where we staged up had some of the fish we were looking for.

The X-Rap is one of his favorite lures for trout, and for a couple of reasons. For one, it catches fish, especially fish that are mid-water column. The other reason he likes these subsurface jerkbaits is because anyone can fish them. The small lip on the bait helps make sure his anglers, no matter their skill level, are getting the bait down in the water column like the bait is intended to work.

“If I have people throwing an MR-17,” he continued, “I don’t know where it is in the water column. The lip is very forgiving.”

While I made a couple of “pop, pop, and take up the slack” retrieves, Jamie threw out a Yo-Zuri Crystal Shrimp, another of his favorite trout baits.

My X-Rap found the first trout of the day. We brought it in, took a couple of photos, and now that Jamie had confidence that at least some fish were present along our grass line, he pulled out another favorite—an Excalibur Super Spook Jr. topwater. For topwaters, he likes bright colors.

“I think switching the presentation is the best way to go to generate a bite,” Jamie explained as he put the topwater rod back in a holder and grabbed a soft plastic. “It’s like playing with a cat. You have to keep changing what you’re doing to get or keep a cat’s attention, and the same goes for trout. I’ll put the topwater away for a little and then pull it back out later.”

Now he was throwing a DOA shrimp in a natural color and rigged on a 3/16 oz. Blue Water Candy X-Eyed ball jig. He likes the weight of this style jig head, as well as the fine wire hook. He was bouncing his soft plastic off the bottom, while I continued to pick out trout with my subsurface bait.

The DOA soft plastic started out-catching the subsurface, so Jamie suggested I switch over.

My soft plastic was a Z-Man Trout Trick in the mood ring color, another of his preferred trout baits, but I must not have been holding my mouth correct. He continued to get bites on the DOA, but I blanked on my Trout Trick.

Then after a few fish, some more photos, and a little time passed, Jamie pulled the topwater back out for another round, and sure enough, the trout that had gone quiet were now reacting again. Jamie’s theory of mixing up your offerings to keep giving the trout a new look was successfully playing out.

Capt. Jamie Rushing, of Seagate Charters out of the Wrightsville Beach area, will be targeting speckled trout all through the month of November and into December. Once December arrives, he shares his time between Masonboro speckled trout and Cape Fear River stripers, and those two areas also give him opportunities for red drum and black drum all winter long. 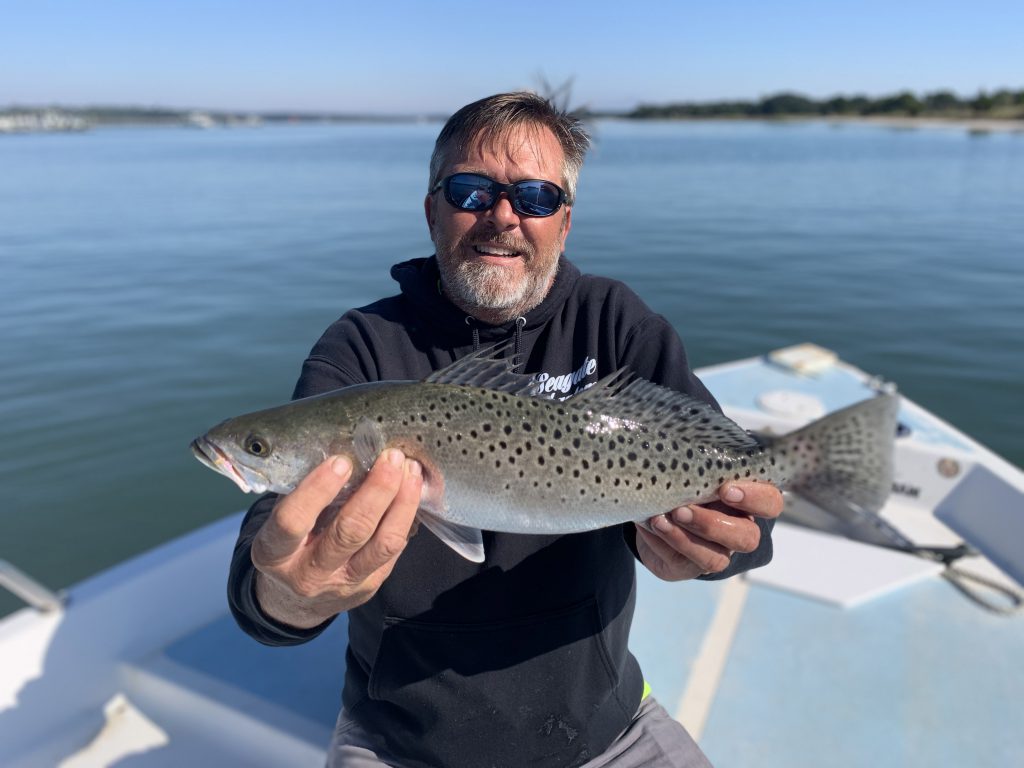 Capt. Jamie Rushing, of Seagate Charters, with an 18″ speckled trout caught on a DOA shrimp in a little creek behind Masonboro Island.

You can check him out on Facebook at Seagate Charters; however, putting effort into social media isn’t high on Jamie’s list, so I suggest you call him at (910) 232-9693. A phone call will help you better appreciate the positive energy that Jamie brings to both his charters and his approach to life in general.

Jamie’s also an accomplished chef, so part of his mantra is that every night is Friday night at the Rushing household. When you call him about chartering, go ahead and ask him what he’s having for dinner. I’m willing to bet 9 out of 10 times his answer will beat whatever’s on your menu for the night.