If fishing is really about creating memories, then Captain Hugh Sutton, of Pungo Charters, has fishing figured out.

My wife Leslie and I made the mid-September trip to Hugh’s Belhaven house, located waterfront on Pungo Creek, for a half day of trout and stripers, and for our trip, Hugh offered us what he makes available to most of his clients—the option to stay in his guest house, a spacious, nicely-finished bonus room over his and his wife Cherry’s detached garage, a very convenient amenity since there isn’t much lodging in Belhaven, and also convenient in that you can sit on the deck and overlook the dock where Hugh’s 24’ Avenger bayboat lies in waiting for the next morning’s adventure.

Leslie likes fishing, as long as fishing means catching, but she likes fishing (and catching) even more if it means a night away from the kids, conversations that aren’t interrupted every 15 minutes or so by “mom, mom, mom,” and a delicious dinner at Spoon River, a farm-to-fork style restaurant in downtown Belhaven that Hugh and Cherry quickly suggested when we asked for a recommendation. 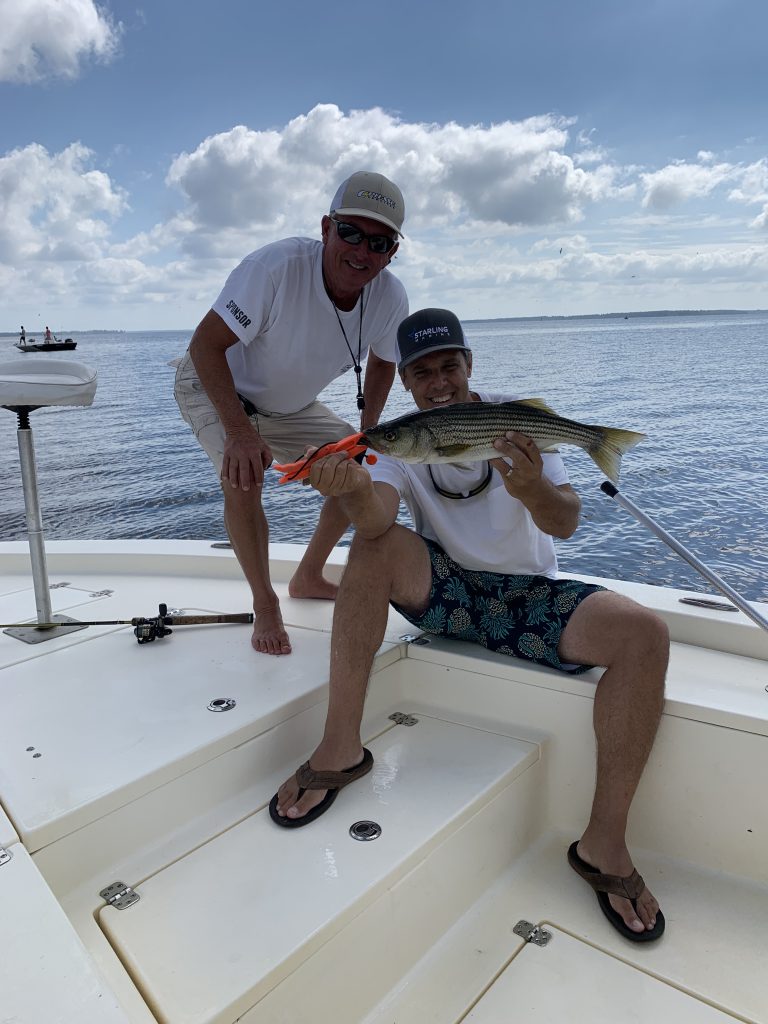 Gary Hurley (right) with one of the stripers that hit a MirrOlure MR-17 near the mouth of Pantego Creek. He was fishing with Capt. Hugh Sutton (left), of Pungo Charters.

So, at 6:30 am the next morning, when we walked out the door of our guest house down to the dock, leftovers from dinner in the fridge and glasses with cocktail remnants watered down by melted ice in the sink, Hugh didn’t have any pressure at all on him to make the trip a success. We still wanted to go and target those trout and stripers, but our getaway was already a memory homerun.

Our first stop was literally around the corner from his house, a spot with a couple of points, water that drops from 2-feet to 6-feet, and a little bit of current that helps to hold bait.

During the summer months, the trout move out of the creeks and into the bigger water. “Starting in September, though,” Hugh explained, “the bait’s moving in, and the trout move back in, too.”

This place had been hot a couple of days prior, so when the topwater only produced some swirls and a couple of blow-ups, and the popping cork found a slot red drum rather than a trout, Hugh decided that we make the quick run to Pantego Creek. Off the bridge there’s a hump he likes, especially when, like on our day, you can see shrimp popping out of the water.

Using the trolling motor to hold our location, we both were handed soft plastics and jig heads and were given the standard instructions to let the bait hit the bottom, pop it once or twice, and then let it fall back to the bottom while maintaining contact. A cast in any direction could mean a trout bite, he told us, and the trout bites came from all directions.

“The typical size of our keepers this time of year is 16-19 inches,” said Hugh as he put another 18-inch trout on ice. “Anything 20 and above right now is a pretty good catch.”

We enjoyed a consistent bite, culling through only a few undersized fish, but then we noticed less shrimp activity and, subsequently, less trout activity. It was again time to move.

The original thought was to go back into Hugh’s creek to the same spot near the points that had produced day after day earlier in the week, but outside of the mouth of Pantego Creek there was simply too much bird activity and too much menhaden. We had to try at least a couple of casts. Leslie and I started throwing the soft plastics again, but then we saw surface-feeding splashes followed by more surface-feeding splashes.

Hugh thought topwaters, but when the topwaters didn’t work, he knew what to throw next. Leslie and I were each handed a MirrOlure MR-17, a suspending twitch bait made to mimic menhaden, and we both came tight by our second cast. More keeper trout came over the gunnel, and mixed in would be 3-5 pound stripers. 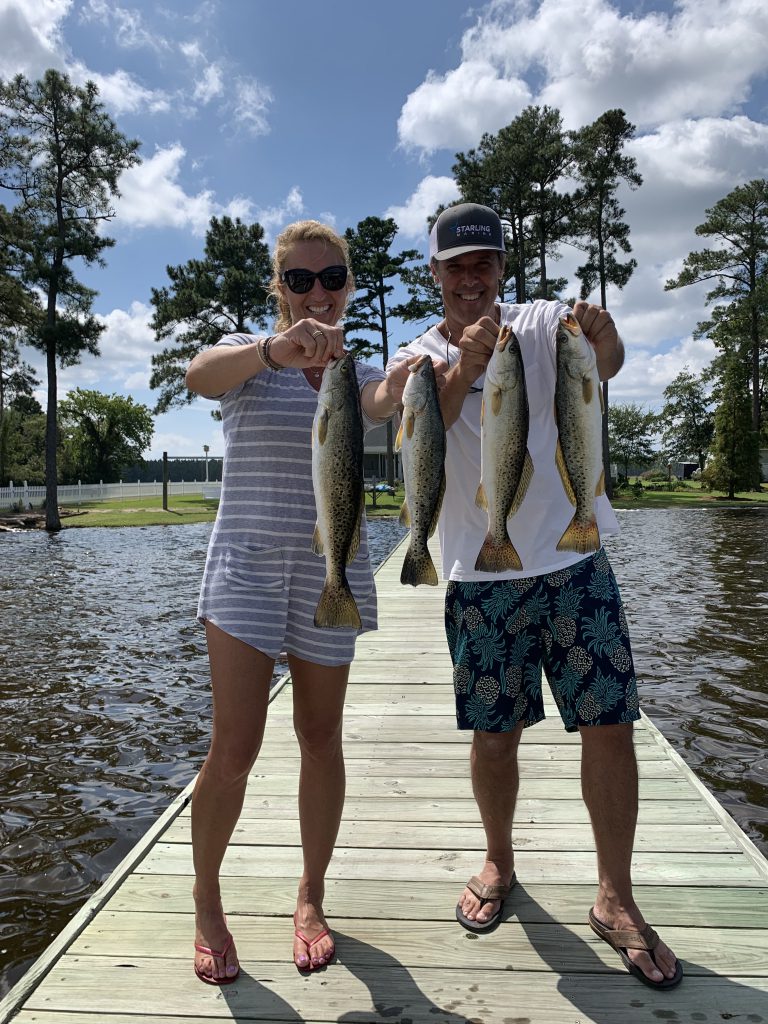 Leslie and Gary Hurley, standing on the dock in front of the Sutton house on Pungo Creek, hold up a handful of the keeper trout hooked throwing soft plastics and hard baits. They were fishing with Capt. Hugh Sutton, of Pungo Charters.

Hugh did everything he was supposed to do and more—he put my wife Leslie and I on plenty of trout and stripers in mid-September in the Pungo and Pantego creeks, he made his guest house available, he suggested a wonderful restaurant, and he gave us a tour of the outside hangout space that he and Cherry created, a screened in area with a wood burning fireplace, a sizeable TV, and an inside/outside kitchen perfect for cooking and serving the day’s catch after a relaxing day on the water.

And Leslie and I thanked him by tangling braid, losing rigs, and hooking not one but two birds during a hot trout and striper bite.

If you’re wanting a gracious host that is as much about the experience as he is about catching fish (and he’s definitely about catching fish), then visit Capt. Hugh Sutton, of Pungo Charters, at www.pungocharters.com, or give him a call at (252) 361-4172.

I’m not sure what the record trout is for his boat, or the record for the number of citations caught in a single day, but I do know the boat’s record for number of birds hooked, and I dare you to try and beat it.