I like a good quandary, and I got a beautiful one from Capt. Byron Shults, of Going Bogue Outdoors out of Atlantic Beach.

Byron gave me two choices for our fishing trip together. We could do a standard 3/4 day bottom fishing trip where J.J. Khoury and I could each bring home (hopefully) the recreational limit of grouper, which Byron predicted would be made up of gags and possibly reds, or we could go on a commercial trip with him where we could enjoy catching way more grouper than the recreational limit allows, and in addition could target American reds, but we wouldn’t be able to take any home. He would need to sell all our fish since it was a commercial trip.

Enjoy catching a couple and bringing them home, or enjoy catching much more than a couple but not able to bring them home? With some grouper fillets already vacuum-sealed and in my garage freezer, commercial fishing it was.

Byron is a busy man with three gigs that keep him working seven days a week. He’s either taking guests on guided offshore fishing trips, going commercial fishing on the snapper/grouper permit he leased this year, or putting in some time working for SeaTow.

“I fulfill my charters that I have on the books,” explained Byron, “which could be anywhere from 3-5 a week, and then fill in the cracks with SeaTow and commercial fishing.” 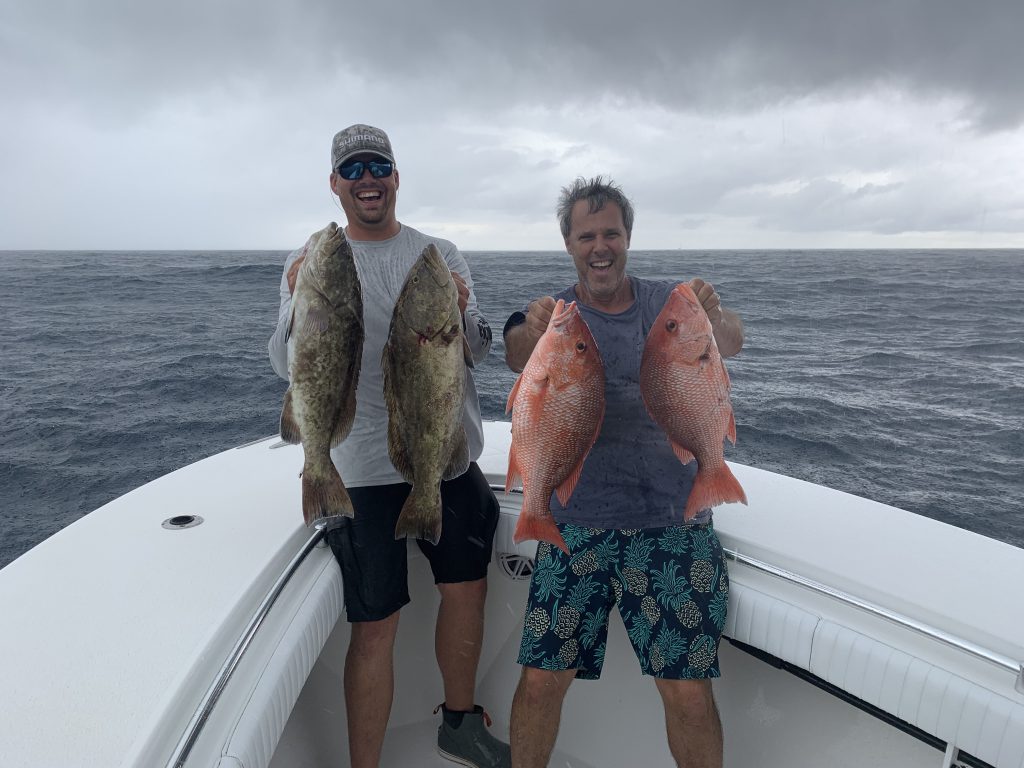 Capt. Byron Shults (left), of Going Bogue Outdoors, and Gary Hurley with some grouper and American reds that were hooked during a commercial trip. They were fishing some ledges and live bottom out of Beaufort Inlet.

“Commercial fishing,” he continued, “has allowed me to fish many more days that I would either be at the dock or working for SeaTow. With that much time fishing, now I can accurately and pretty precisely predict where fish are moving to and from, and it allows me to have more accuracy with target species and fulfilling customers’ and clients’ needs when it comes to charter time.”

Byron headed us out to a system of ledges in approximately 90’ of water. The conditions only allowed us to go south out of Beaufort Inlet, and this was based on rain and swell predictions that took away the option to safely head to the east side of the shoals. Still, he had successfully fished these ledges a few days prior, so confidence was high.

“I anticipate what my anchor course will be, and I’m usually wrong every time,” Byron answered with a smile when asked about his system for first pulling up to a spot. “After I get it wrong the first time, I’ll fly the anchor up again and attempt to land it a second time as close as I can to the mark.”

We had stopped about a half mile from our first mark, and at that time he got the baits and rigs ready so that we would be good to drop immediately when the anchor was set.

“Shad seems to be a consistent producer of a lot of bottom fish,” he said as he set J.J. and I up with both some dead cigar minnows and pogies. “It’s widely accessible here. I can go and net at any time at my leisure, so it’s free. And almost anything worth keeping is going to eat it.”

Most of the time he hooks the pogie (shad) through the spot on their back, sometimes cutting the pogie in half and sometimes dropping it whole, but before the pogies, he first likes to drop a few cigar minnows or some live pinfish. These first baits are used to get the bite engaged, and then once engaged, he switches over to the cheaper product—shad.

Our rigs were fairly traditional—10/0 circle hooks tied to 1-2’ of 130 lb. mono, the mono connected via a 130 lb. snap swivel (for quick changing of rigs) and weighted with 16 oz. of lead. And for abrasion resistance and to add a little bit of stretch, he ties a top shot above the snap swivel of about 20-50’ of more mono.

We were over some rock formations and coral bottoms with lots of sea grass along the edges. Byron likes to focus more on the grass edges, since it means less chance of getting rocked up or losing fish to abrasions and break-offs. 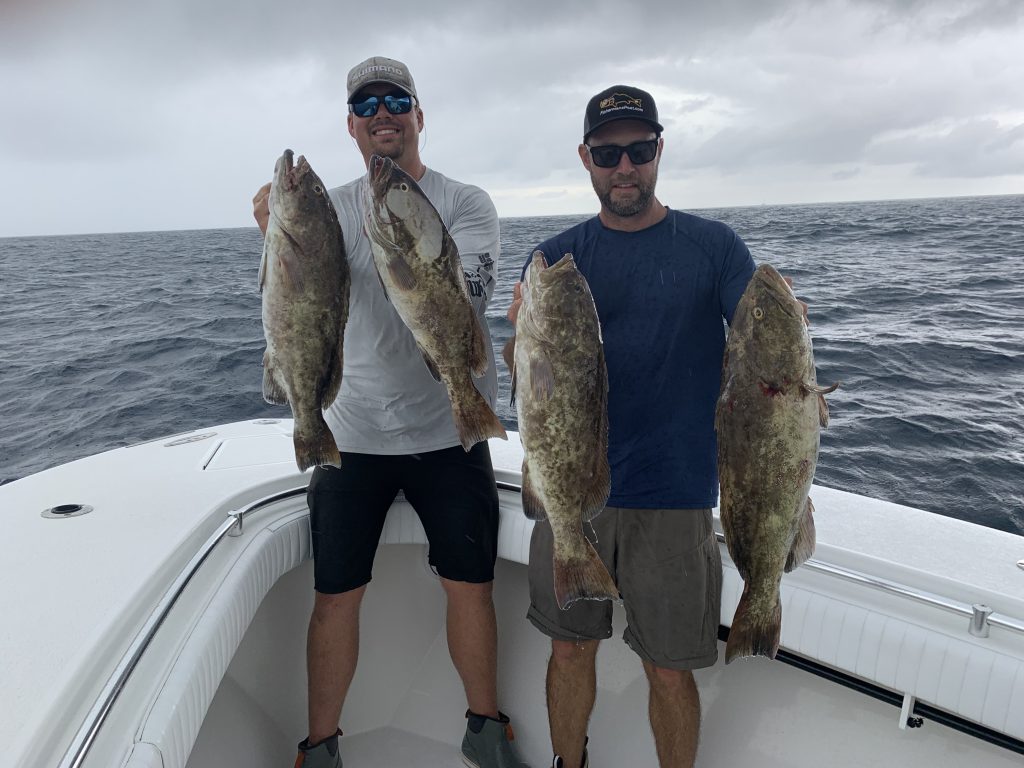 Capt. Byron Shults (left), of Going Bogue Outdoors, and J.J. Khoury with some of the gags they landed during a commercial trip out of Atlantic Beach. They were dropping dead cigar minnows and pogies in 90′ of water.

While the 10/0 circle hooks meant it was understood that we weren’t to try and set the hook but just to give a steady turn of the handle, Byron told us the additional advice he typically gives clients about a grouper bite, “I’m going to let them eat, and if it’s what I want, then he’s going to do the work himself. You’re waiting for the fish to really commit to eating it. They might take a bite or a nibble or a taste or test, but once they fully commit to eating that bait, if it’s what you want, then they’re going to be on the other end of that line.”

Capt. Byron Shults, of Going Bogue Outdoors, would love to take you charter fishing to target any number of bottom fish: gag and red grouper, triggerfish, beeliners, sea bass, and more, or you can go deep dropping for such species as snowy grouper and tilefish. His boat, a 27’ Onslow Bay with twin Yamaha 300s, also see its fair share of wahoo, dolphin, and (in just the past couple of years) some yellowfins.

More information on all the trip possibilities (the 3/4 day gag and red grouper trips that go out 18-30 miles are his bread and butter) can be found at www.goingbogue.com, or you can give him a call directly at (919) 475-5941.

You may not pull up as many grouper on your charter trip that we did on our commercial trip, but the grouper fillets you take home will be way, way better than our cooler of leftover Uncrustables.