The Carolina Beach Inshore Challenge was originally scheduled to be a two red drum event, but with the surprise reduction of the flounder season to just two weeks, in 2021 the Carolina Beach event was the only Fisherman’s Post tournament that fell within the flounder window. The competition was hosted over September 10-11, and once again the Tournament HQ was at Inlet Watch Marina.

The leaderboard was based on a boat’s single heaviest flounder, but the event also offered a Two-Flounder TWT, Single Big Flounder TWT, a $250 High Roller TWT, as well as a Single Big Red Drum TWT.

The top boat at the close of scales on Saturday at 4:00 was Team Killinn Timee. Kyle Peters and Eddie Croom weighed in a tournament best flatfish tipping the scales at 9.47 lbs. In addition to the leaderboard and the Single Big Flounder TWT, the duo also took the top spot in the Two-Flounder TWT by weighing in a second flounder at 7.56 lbs., for a total of 17.03 lbs. 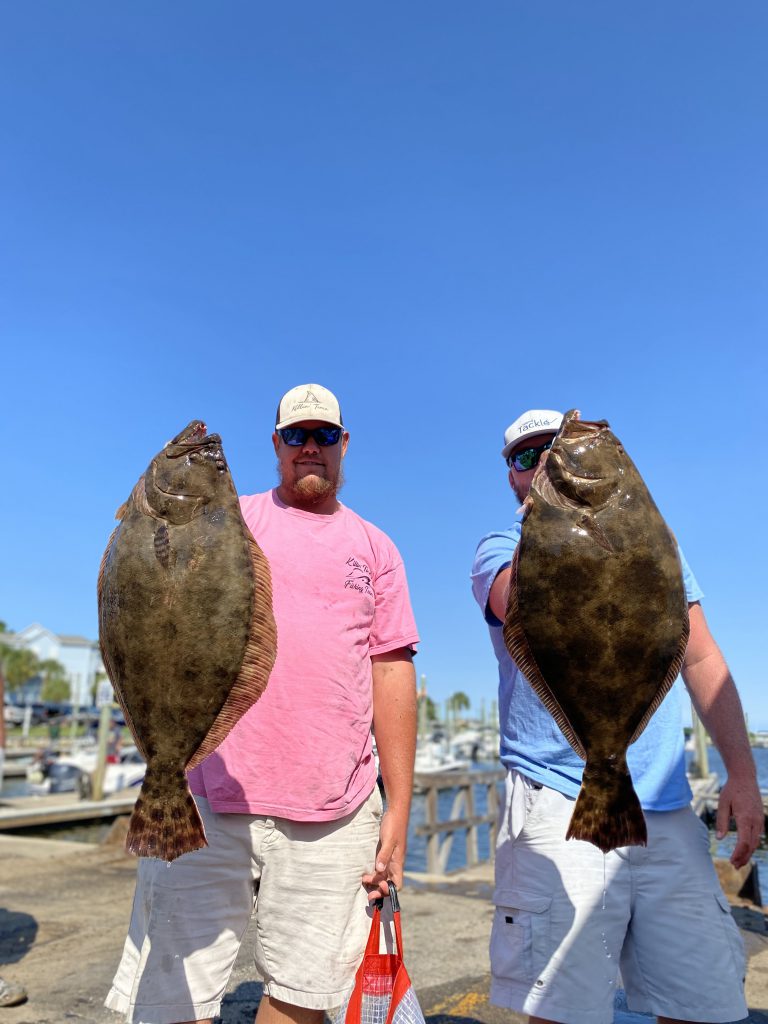 Kyle Peters (left) and Eddie Croom, of Team Killinn Timee, took the top spot in the Carolina Beach Inshore Challenge with the event’s biggest flounder (9.47 lbs.) and the event’s heaviest two-fish aggregate (17.03 lbs.). They were fishing live bait in the Cape Fear River.

They started their day easily catching big mullet, and then Peters and Croom headed to the Cape Fear River. Their first choice for big flatfish was to target Snow’s Cut, but the tide wasn’t right, so they decided to try out some river spots.

They hadn’t landed anything at a couple of spots and were getting ready to move to Snow’s Cut, and then all of a sudden, the bite turned on. In just 45 minutes, they had eight fish in the livewell, and half of them were citation fish.

During the bite, they landed a 26” fish and started to celebrate, but then just 15 minutes later, they landed the 27” fish that would be the biggest of the tournament.

“I like structure near a drop off,” Peters described when asked about the conditions he looks for when flounder fishing, “as the big fish need that current. Oysters, pilings, concrete all work, and I want it close to about 15-inches of water.”

Coming in second place was Team Scales, comprised of Will Callihan and Jordan Carter. Their single big flounder that took second place on the leaderboard weighed 9.12 lbs. The big fish also took second place in the Single Big Flounder TWT, but the biggest money came from the fish’s first place spot in the High Roller TWT.

In addition, Team Scales weighed in a 5.50 lb. flounder, for a two-fish aggregate of 14.62 lbs., good enough to finish in second place in the Two-Flounder TWT.

After catching their bait in the Carolina Beach yacht basin, they headed for Snow’s Cut. There they caught the 9+ lb. fish in the first 10 minutes of the tournament, having the fish in the boat by 7:10 am.

They landed the fish by casting to some structure with a 6” mullet on a Carolina rig.

Callihan and Carter landed five more quality flounder in that same area over the next two hours, with the smallest of the five fish weighing 3.5 lbs. While most of their fish came on mullet, they also landed a couple on bucktails with a Gulp swimming mullet soft plastic. 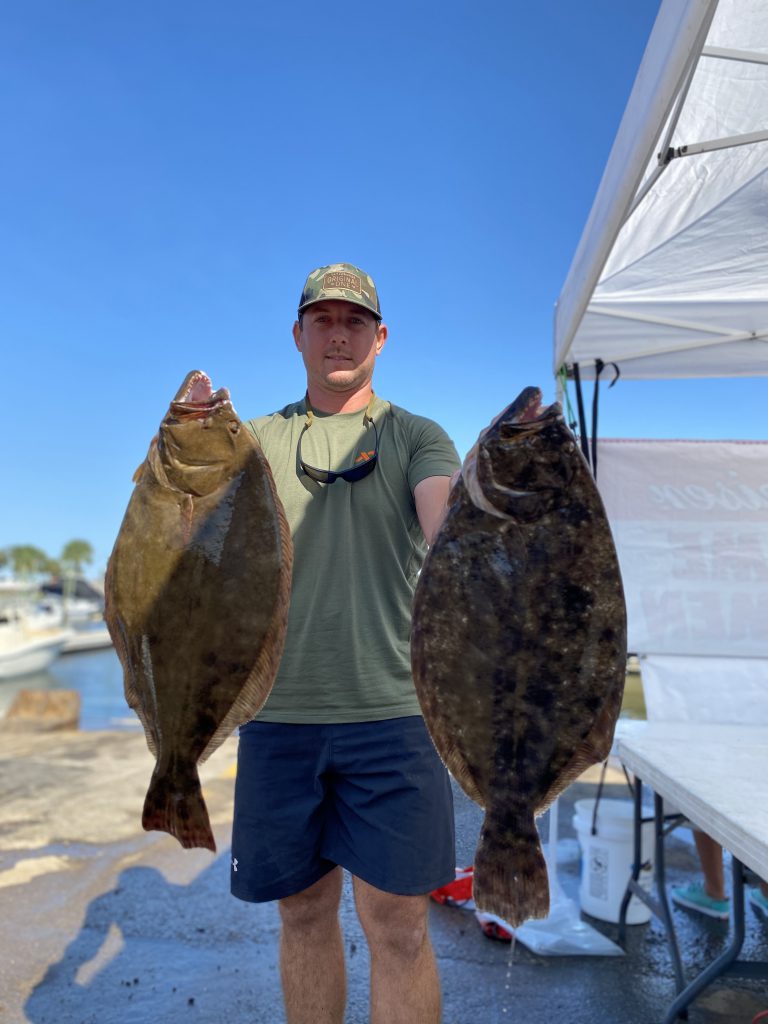 Will Callihan and Jordan Carter (not pictured), of Team Scales, with a two-fish aggregate weight of 14.62 lbs. in the Carolina Beach Inshore Challenge. The catch included the event’s second place flounder at 9.12 lbs., and both fish came from Snow’s Cut on live mullet.

The team finished the day in the Cape Fear River looking for a red drum. They found plenty of reds, but every fish was either 25” or 28”, so they headed for the scales at Inlet Watch.

Team C/W Skiff took the Single Big Red Drum TWT with a 7.34 lb. redfish. Then in the secondary prizes, Mason Murray was the Junior Angler champion with a 1.85 lb. flounder, while Wanda Hobbs was the event’s top Lady Angler and Tom Fulp was the top Senior Angler with a 7.49 lb. flounder weighed in by Team MWT.