Cy’s World Rodeo once again took place on the Saturday following Thanksgiving, and in the event’s 11th year, the event attracted a record number of boats. There were 19 boats that met at the Ocean Isle Fishing Center on November 27, with each boat searching for the heaviest two-fish aggregate: two trout, two red drum, or one of each. 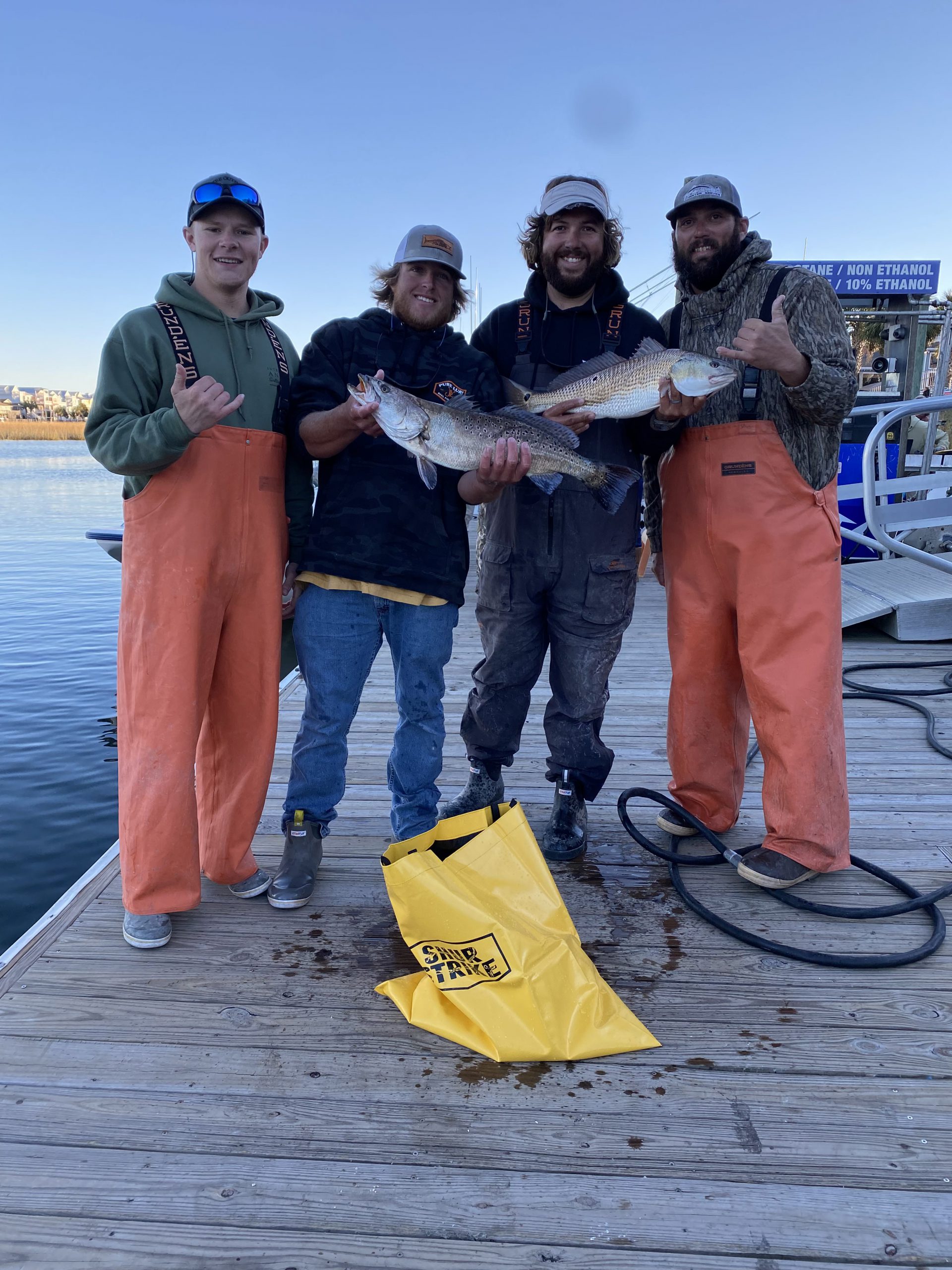 The tournament was first initiated in 2010 in honor of Edgar “Cy” Garber, IV, who passed away at age 17 and was an avid outdoorsman. Cy’s World is a nonprofit organization created to enable underprivileged youth in southeastern North Carolina to experience the great outdoors that Cy loved so much.

The first nine years of the event was dominated by Brandon Sauls and Clay Morphis, but in recent years the top spot has switched back and forth between Sauls/Morphis and Kook Tacos. This year it was Kook Taco’s turn.

Tim Disano, Tripp Hooks, Shane Britt, and John Cooke, of Team Kook Tacos, took the win in this year’s event by weighing in a 5.9 lb. red drum and a 6.55 lb. speckled trout.

All of the trout they had caught during the week leading up to the tournament were in the 18-20” range, nice trout for sure but likely not heavy enough to win the event, so on the morning of the event, they decided to make the run to a shell bank in the Little River area to take advantage of what would be the last 30 minutes of the falling tide.

“It was 30 degrees outside,” explained Disano, “so we weren’t happy to make the run.”

However, they almost immediately landed two trout, one small and one weighing about 4.5 lbs., with both coming off of live shrimp under a cork. The bite went cold for the next 20 or so minutes, and in addition, the tide stopped falling and went slack. They had little optimism that any more fish would bite with no moving water, but then Tripp Hooks’ bobber went under.

Hooks reeled in the 6.55 lb. speck, and then the bite went cold for another 2.5 hours, as they didn’t generate another fish.

They tried 2-3 spots on their run north, and then decided on a spot in a creek next to some oysters where they hoped they would find some red drum. They sat the remainder of the day in this one location, and as soon as the tide switched again, they landed their 5.9 lb. red drum off of a live shrimp on the bottom.

Second place went to Team Feeling Good with Johnathon Tripp and Camden Rowland. The duo self-describe as weekend warriors, so they followed the same plan they usually do when they’re able to get out on the water—they headed for some area marshes to throw early morning topwaters and soft plastics.

Both of their redfish came on MirrOlure topwaters, and both were in the boat by 8:00 am. The two reds totaled 10.7 lbs., with one weighing 5.2 and the other weighing 5.5. 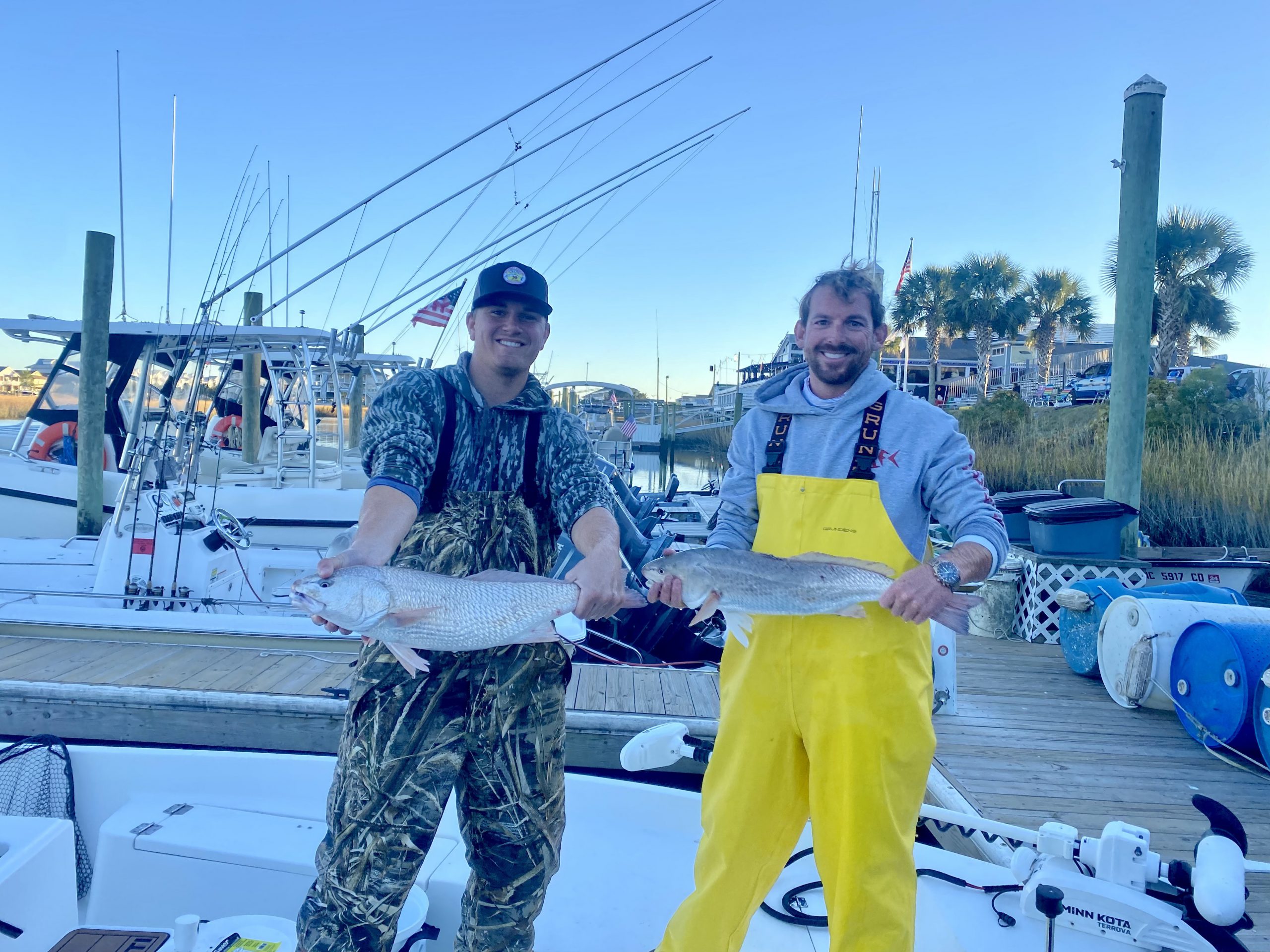 Johnathon Tripp (right) and Camden Rowland, of Team Feeling Good, took second place in the Cy’s World Rodeo with this two-redfish aggregate of 10.7 lbs. Both reds came off topwater baits targeting a marsh in the Ocean Isle area.

“All of our action happened first thing,” stated Batten. “It came in the first hour of fishing—the low fall of the tide.”

Team High Tide was set up on the Little River jetties and was floating shrimp down the rocks. In all, they caught a total of 10-12 trout, with half of them in the 3+ lb. range.

The team went in search of a red drum around lunch, targeting docks in the area, but “nothing would play.”

Meliah Sischo (age 7) was the event’s Junior Angler Champion, taking the title for the second year in a row.

For more information on the Cy’s World Foundation, you can visit www.cysworld.org.