Wind was in the forecast (but in Hatteras wind is almost always in the forecast) for this year’s Hatteras Island Surf Fishing Challenge, but still a record number of anglers registered to go out in search of the heaviest bluefish, pompano, spanish, sea mullet, and slot red drum. The over one hundred anglers, after grabbing their armband on Friday (Sept. 24) at Camp Hatteras in Rodanthe, then choosing their spots on the beach from Rodanthe down to Hatteras Inlet, and after fishing as much or as little of the 36-hours of tournament fishing time, met again on Sunday (Sept. 26) for an awards dinner, an awards ceremony, and a tournament raffle.

The Bluefish Division was won by Donnie O’Leary, of Morehead City. O’Leary landed a 2.7 lb. bluefish at sunrise on Sunday morning. He was fishing in the Ramp 55 area when he saw birds diving and started throwing a pink metal jig (Sting Silver-style). He and his fishing buddy were catching fish on every cast, with a mix of blues and spanish coming back in. In addition to the first place bluefish, O’Leary also landed the second place spanish during the sunrise bite. 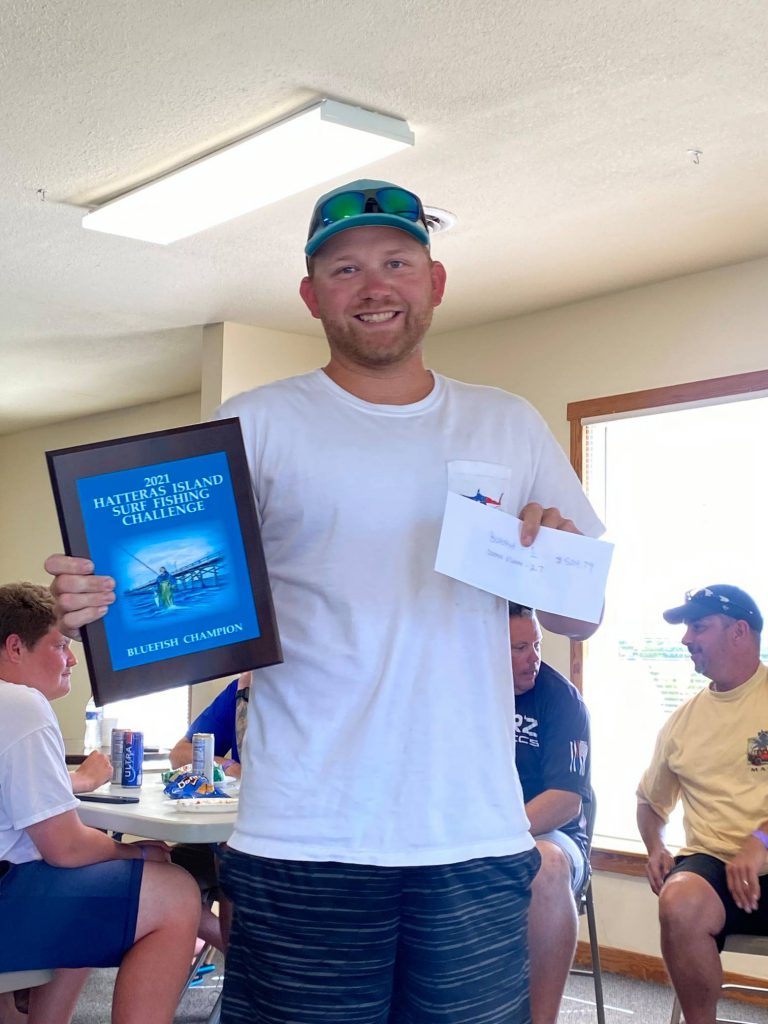 Donnie O’Leary, from Morehead City, was the Bluefish Division winner in the Hatteras Island Surf Fishing Challenge with a 2.7 lb. bluefish caught in the Ramp 55 area on a metal casting jig.

First place in the Spanish Division went to Mike Debee. He was fishing near Donnie O’Leary in the Ramp 55 area and was throwing at the same school of fish. His big spanish weighed in at 5.1 lbs.

The top sea mullet was decided by time, with both Larry Hart and Victor Putnam each weighing in a 1.2 lb. fish. Hart’s was weighed in earlier, though, so he earned the win.

Hart, from Indian Land, SC, caught his fish using a sand flea on a Joe Moore’s River Rig. He was fishing around Ramp 32, and the winning sea mullet was one of about 10 fish that were landed during a hot run on Saturday morning. 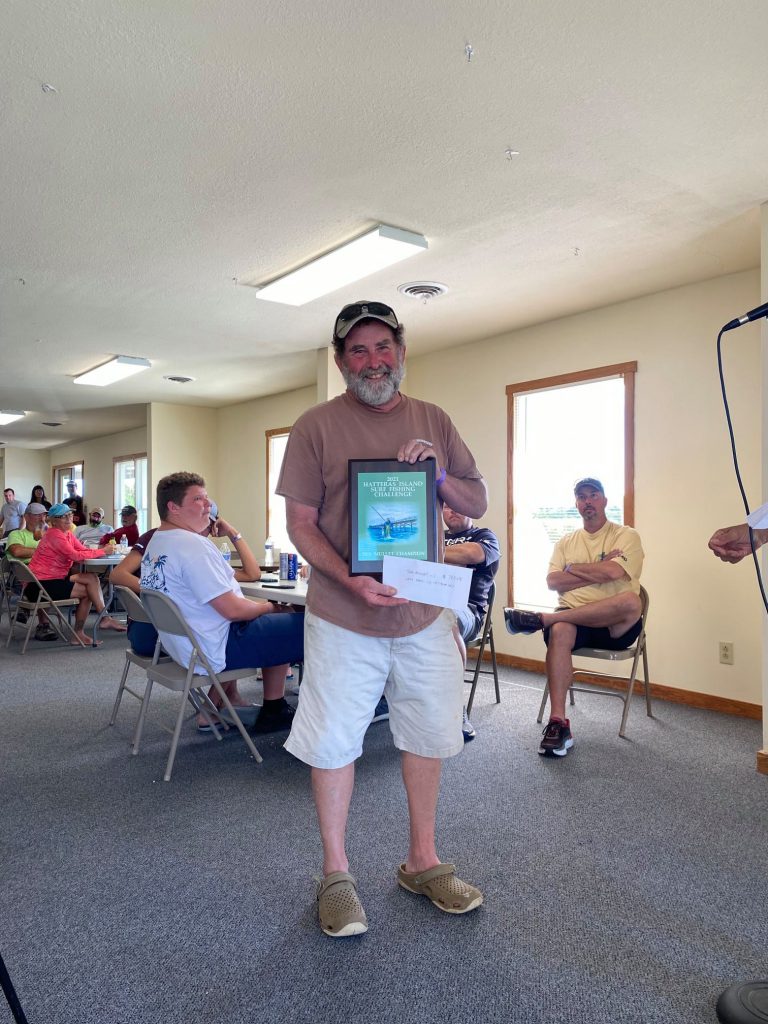 In the highly contentious Pompano Division, Becky Buppert, from Conway, NC, was the one angler on the leaderboard that caught a pompano heavier than 0.6 lbs. Her 0.7 lb. pompano was hooked near the Frisco bath house that is under construction, and it hit a piece of Fishbites on a pompano rig with colored beads. Buppert also landed a 2.0 lb. bluefish over the weekend, a fish that brought her the Lady Angler title as well.

Chloe Lombardo was the Junior Angler Champion with a 0.4 lb. sea mullet, and Timothy Kane was the top senior with a 2.0 lb. bluefish.

The biggest money of the weekend always goes to the winner of the Red Drum TWT, and the check this year went to Ron Ballard, of Belmont, NC. He landed the 8.0 lb., 27” red drum early on Saturday morning using a whole shrimp and fishing in front of Camp Hatteras. When Ballard’s drum hit, his fishing buddy was weighing in a slot drum at Hatteras Jack that he had caught in the same location just 15 minutes prior. 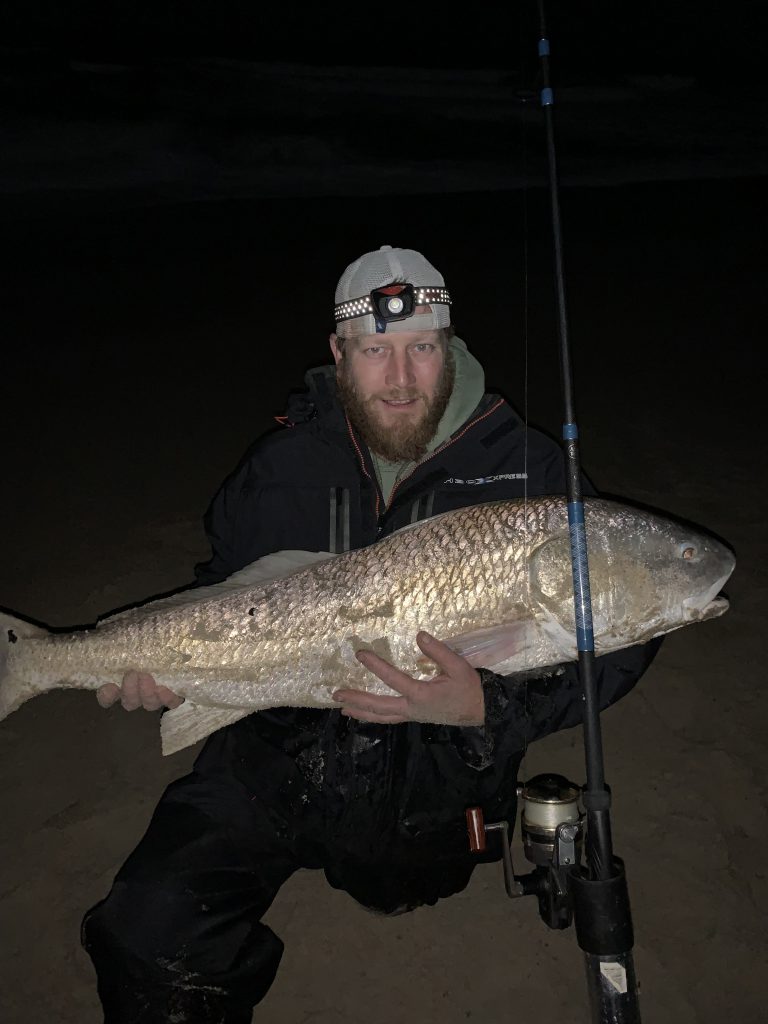 Andrew Butner, from Kernersville, with the first citation red drum caught in the Hatteras Island Surf Fishing Challenge. The big red measured 45″ and hit a sea mullet north of Avon.

Perhaps the most notable accomplishment over the weekend, though, came from Andrew Butner, from Kernersville, NC. Butner was the first angler in all five years of the event to successfully land a citation red drum during tournament hours. His 45” fish struck cut sea mullet at night north of Avon. Butner’s name and fish are now the first addition to the Big Red Hall of Fame plaque that resides year-round in Hatteras Jack.

Tournament anglers enjoyed an awards dinner—compliments of Hatteras Jack and Century Rods and Ryan White—and all tournament fish weighed in over the weekend were sold to Jeffrey’s Seafood, with all the proceeds going to Hatteras Island Meals.

For a more complete leaderboard, as well as information on next year’s Hatteras Island Surf Fishing Challenge, please visit www.FishermansPost.com.