The Inshore Tournament Trail, hosted annually by Fisherman’s Post, is a season-long competition where area anglers fish as many of the five Inshore Challenge events as they wish in their pursuit of three heavy red drum. At the end of the five events, which are standalone events open to anyone wanting to try tournament fishing, the top ten Trail teams with the heaviest three-fish aggregate qualify for the invite-only Trail Championship.

This year that one-day Championship event was held Sunday, September 12, out of Inlet Watch Marina, and the leaderboard was based on a boat’s heaviest two-fish aggregate, with a voluntary, winner-take-all $100 Single Big Red Drum TWT also offered.

The big winners in this year’s Trail Championship was Kook Tacos, a team out of the Ocean Isle area that had finished third in the regular season, and they took both the Championship title and the TWT. 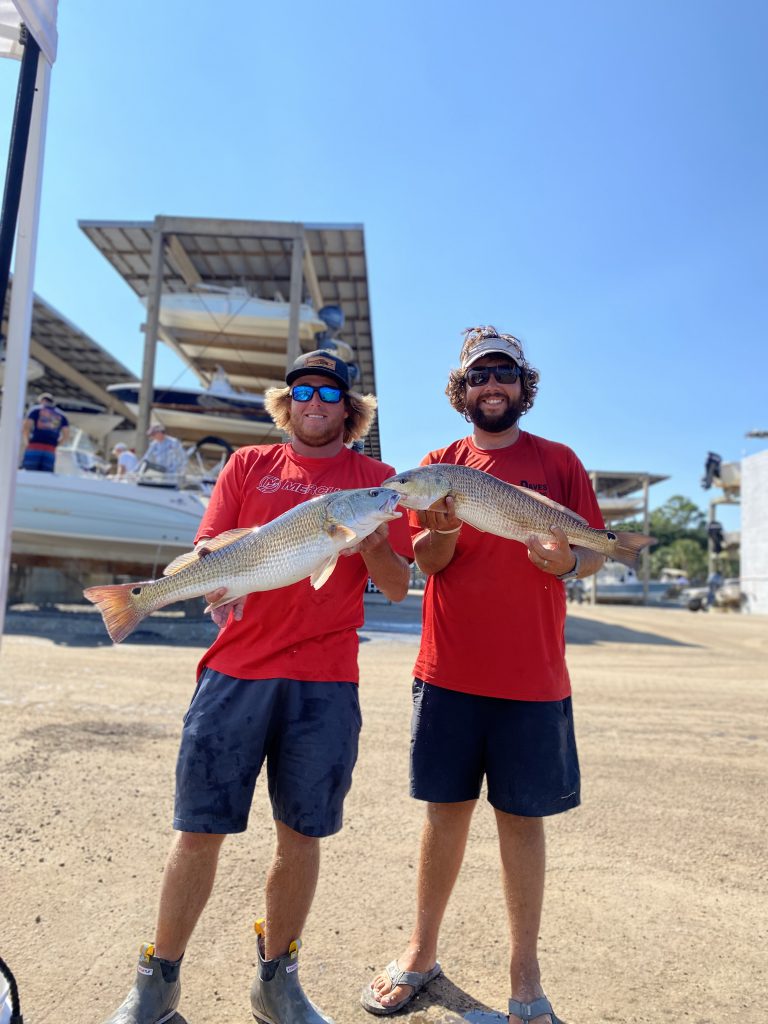 Tripp Hooks (left) and Tim Disano took the Trail Championship title, as well as the Big Fish TWT, by weighing in a tournament-best 14.54 pounds. One fish (6.51 lbs.) came from the Bald Head area, and the other (8.03 lbs.) from Sunset Beach.

Kook Tacos’ Tim Disano and Tripp Hooks weighed in two red drum totaling 14.54 lbs., with the big fish weighing in at 8.03 lbs. They started their day by trailering to Southport with the plan to target an area near Bald Head where they believed they could find some tournament fish.

On arrival, Disano and Hooks saw a boat too close to the spot for them to fish the area like they wished, so they positioned near the area but were only able to pull in one 5 lb. class fish.

Their Plan B was to head back to the Sunset Beach area. The ocean was calm enough to make the outside run, so they came in through Tubbs Inlet. At this first Sunset Beach location, again a couple of boats were in the area they wanted to target. Still, Disano and Hooks put in about two hours, but those two hours didn’t produce a single bite.

Finally, it was their third spot that produced, a deep grass bank with some ledges and structure, and all of their fish came on live mullet. In a two-hour span, they landed approximately 30 red drum, with most of the fish either 24-25” or way over 27”. The school produced a 6+ lb. fish, to complement the 5 lb. fish from Bald Head, but they knew 11-ish lbs. of fish would probably not take the title.

They were running out of time and bait, looking at just four mullet left in the livewell and all of them with red noses. Tim was inclined to make the run, but Tripp pushed for one more throw of the cast net and another 10 minutes of fishing.

They threw the net, landed 8 baits, and on their first cast with the new baits, they hooked the biggest fish of the day, an 8+ lb. fish that measured only 26.5”.

Finishing in second place in the Trail Championship was Ben Miller and Robert Horne, of Team No Idea. They weighed in two red drum totaling 13.55 lbs. 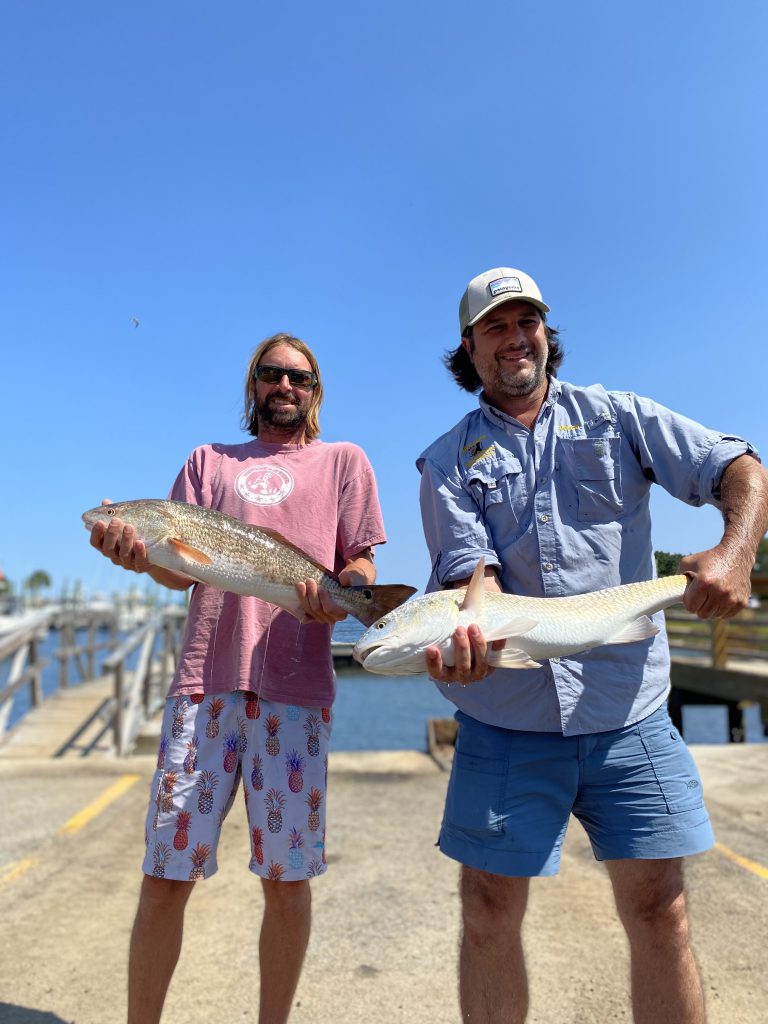 Robert Horne (left) and Ben Miller, of Team No Idea, with the 13.55 lbs. of fish that earned them runner-up in the 2021 Inshore Trail Championship. Both fish came off of live mullet on Carolina rigs.

The duo had found some quality red drum on Saturday while fishing in the Carolina Beach Inshore Challenge, so on Sunday they headed back to the same spot. Both of them like using live mullet on Carolina rigs, but they also like spooling the entire reel with fluoro, rather than just using fluoro leaders.

“It’s my belief,” explained Miller, “and I’ve seen it happen, that with live bait you get more bites with mono or fluoro than you do with braid.”

Miller and Horne fish this one spot often, some deep water beside an oyster bed where the fish stack up at the bottom of a 15’ hole, and they suspected that the bite would turn on once the tide got high and they saw some green water.

“The bite turned on about the same time it did the day before,” Miller recalled, explaining that they landed 10 fish, a mix of flounder and red drum, in a relatively short bite window. The two red drum they weighed in were the two smallest red drum they hooked, with all of the others going over the 27” slot.

Plans are already underway for the 2022 Inshore Trail, as are plans for all of the standalone events that the Trail boats fish in their pursuit of three heavy red drum. Stay tuned to www.FishermansPost.com for info on both the five Inshore Challenge events (Ocean Isle, Topsail, Wrightsville Beach, Southport, and Carolina Beach), as well as the Inshore Trail regular season and the Inshore Trail Championship.