This year’s Pleasure Island Surf Fishing Challenge, held over the weekend of October 15-17, attracted nearly 500 anglers in search of the heaviest bluefish, trout (speckled or gray), black drum, sea mullet, and pompano, as well as red drum for those that opted into the voluntary Red Drum TWT.

While beautiful fall weather welcomed anglers on their first night of fishing, with lines in the water starting at 11:59 pm on Friday, a front moved through Saturday night making the conditions more challenging all the way until the 36-hour fishing time ended Sunday at noon.

Those challenging conditions, though, produced some leaderboard fish.

The heaviest black drum over the weekend came from Damien Gibson, from Wilmington. He landed a 1.6 lb. black drum early Saturday morning that stood in first place for a few hours, but then after the second weigh-in update on Saturday, his fish was dropped to 5th place.

Then early Sunday morning at about 3:00 am, his winning 2.4 lb. black drum struck a scented, dead sand flea on a Carolina rig with a short leader. He was fishing an area at the beginning of Freeman Park, and he only used the sand flea because his minnows had started to die around 1:00 am.

“I bought some shrimp,” Gibson recalled, “and the guy gave me some of the sand fleas as a thank you, and that’s what I used.” 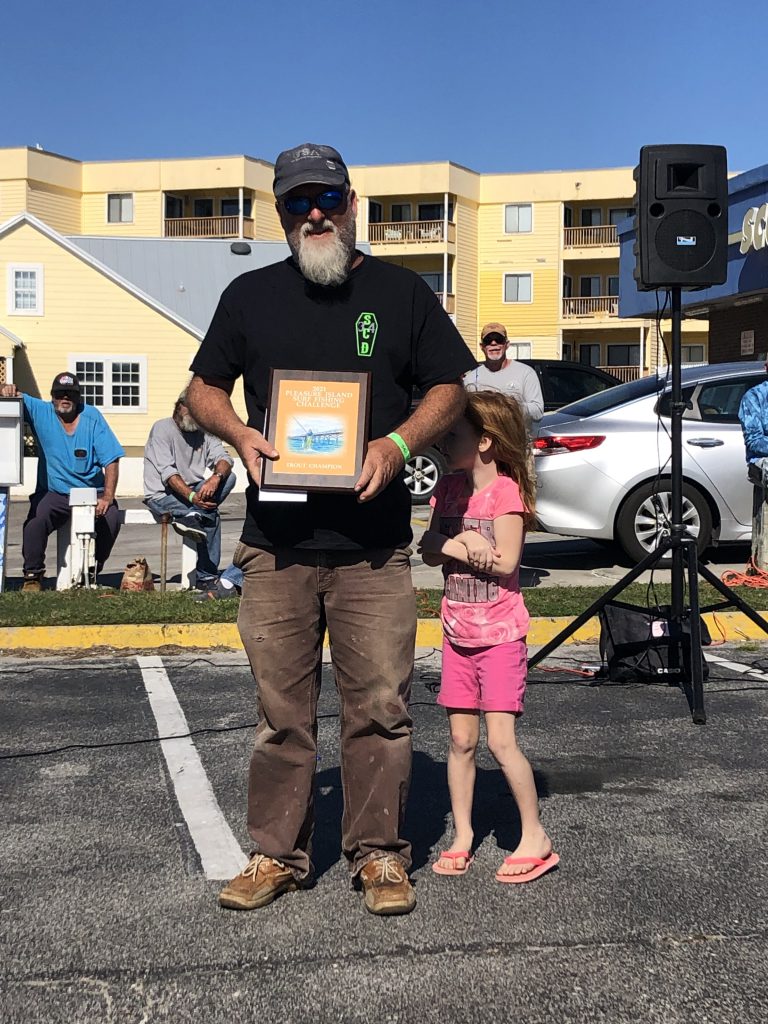 Kevin Burrage, from Salisbury, NC, weighed in the heaviest trout, a 3.0 lb. gray trout that hit a piece of cut mullet on the Fort Fisher beach.

The top trout in the event was weighed in by Kevin Burrage, from Salisbury, NC. Burrage landed a 3.0 lb. gray trout on Sunday morning around 8:15. The trout hit a piece of cut mullet on a two-hook bottom rig that he was soaking about midway down on the Fort Fisher 4wd beach.

“I caught gray trout all night,” Burrage remembered, “but they were all one pound to a pound and a half. Then I started again around 5;30 am and caught that bigger one.”

The heaviest bluefish came from Robert Carter. His 4.3 lb. blue was weighed in Sunday morning, and it scaled a full pound heavier than the second-place finisher.

William Heintz, from Reidsville, NC, took first place in the hotly contested Pompano Division. His 0.6 lb. pompano was one of four 0.6 lb. pompano that made the leaderboard, but his fish was weighed in at 6:50 am on Saturday morning, a little over an hour earlier than the second-place finisher in the division.

Heintz caught his winning fish about 150 yards onto Freeman Park. The tide had just started to fall, and the fish hit a Fishbites artificial bloodworm on a two-hook rig.

The heaviest sea mullet on the weekend came from Jonathan Brianne, from Elizabethtown, NC. Brianne was fishing near the Oceaneer Motel when the 1.7 lb. fish hit Sunday morning around 2:00 am. The sea mullet fell for a sand flea on a two-hook rig.

The biggest payout on the weekend is always the Red Drum TWT, and this year’s winner was Cory Weisner, from Lexington, NC. Weisner was fishing the Carolina Beach surf when the 7.7 lb. red drum hit a piece of cut spot on a bottom rig soaking in a trough on the incoming tide. The winning red drum brought him nearly $4,000 in prize money.

All of the fish weighed in over the course of the weekend were donated to First Fruit Ministries, a local food bank that helps those in need, and tournament anglers enjoyed an Awards Dinner on Sunday prior to the Island Tackle raffle and the Awards Ceremony.

A more complete leaderboard, including the top five places in all five leaderboard divisions and the top three in the Red Drum TWT, can be found online at www.FishermansPost.com.