The Pleasure Island Team Surf Fishing Challenge, the first of five surf fishing competitions that Fisherman’s Post hosts throughout the year, enjoyed mild, sunny weather and attracted 31 teams of up to four anglers per team to fish the 36-hour event. Teams were in search of the heaviest three-fish aggregate in four divisions: Red Drum, Bluefish, Black Drum, and Sea Mullet.

Team Gotcha, comprised of Cory Weisner, Chris Oldham, and Bill Nance, were the big winners over the weekend, taking the first-place titles in multiple divisions and walking away from Lazy Pirate, the host site of Registration, Weigh-In, and Awards, with two plaques and a handful of checks.

The team only landed one red drum over the weekend, a 5.80 lb. fish, but their one red drum proved to be the only red drum weighed in by any team. Chris Oldham landed the fish Saturday morning early, not long after the competition started. He was soaking a piece of cut mullet in the Kure Beach surf. The red drum took both the division title, as well as the Single Big Red Drum award.

Team Gotcha were the big winners in the Pleasure Island Team Surf Fishing Challenge, taking first place in both the Red Drum and the Sea Mullet divisions, as well as winning the Team Aggregate TWT and Team Hall of Fame award. They are pictured with the 5.80 lb. redfish that accounted for their Red Drum win.

Not only did the red drum come early for Team Gotcha, but most of the fish the team weighed in were caught in the first three hours of the event. This included the three sea mullet, weighing a combined 4.90 lbs., that took first place in the Sea Mullet division. The sea mullet all came on sand fleas in a trough just off the sand.

Bill Nance landed the biggest of the sea mullets at 1.80 lbs., bringing the team the Single Big Sea Mullet award as well.

Team 4 Amigos also did well on the leaderboard, taking the Bluefish title. They weighed in a three bluefish aggregate weight of 3.50 lbs.

The 4 Amigos was made up of Dale Traxler, Tommy Manning, Tony Castillo, and Craig Brackens. They mostly fished an area about 200 yards south of Kure Beach Pier, and found most of their fish throughout the weekend at either 1-2 hours before high tide or 1-2 hours after high tide, and all of the blues bit on cut mullet on a Carolina rig. 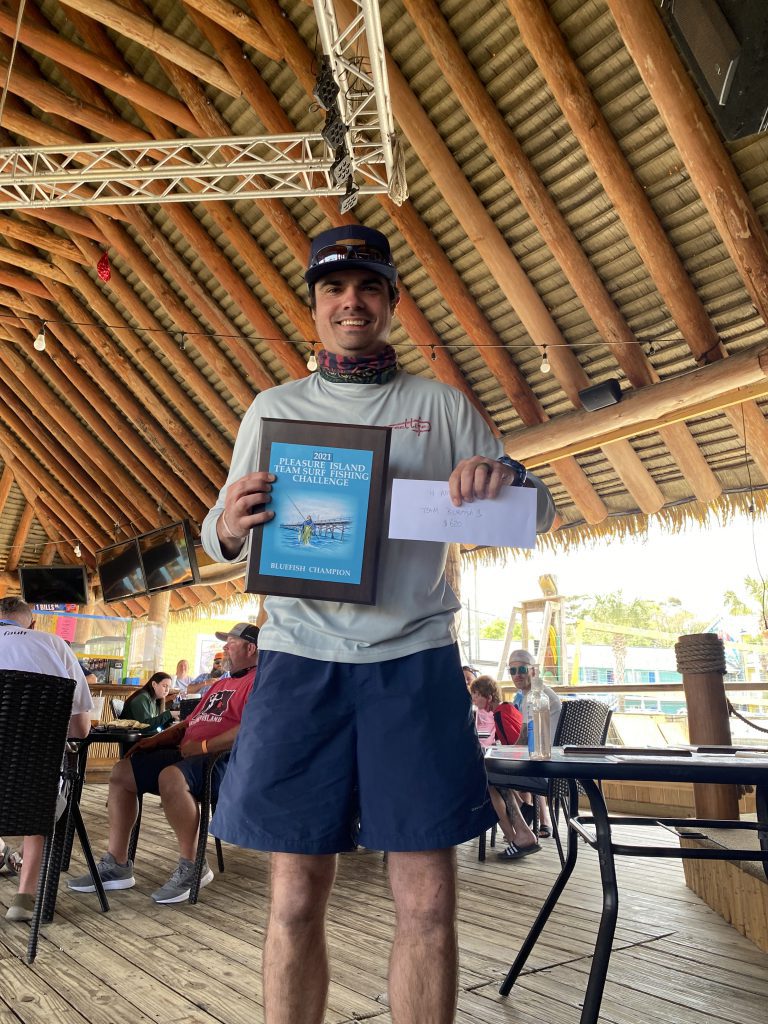 Dale Traxler, captain of 4 Amigos, with the Bluefish division plaque and prize money. He and Tommy Manning, Tony Castillo, and Craig Brackens took the division with a three bluefish aggregate weight of 3.50 lbs.

The Black Drum title went to Team Aquaholics, made up of Britt Martin, Todd Stevenson, Rob Seguin, and Kent Gatewood. They only needed two black drum to win with a total of 5.50 lbs., winning a tie in weight with Team Surprize Me based on time of weigh-in.

Both black drum weighed in by Team Aquaholics came in the first 30 minutes of the competition. They were fishing the coquina rocks near The Riggings, and the black drum bit on fresh shrimp.

All of the fish weighed in by all of the teams were donated to First Fruit Ministries, a local non-profit that provides hot meals and emergency groceries to households in need.

For more information on all of Fisherman’s Post’s surf fishing competitions, please visit www.FishermansPost.com and click on “Tournaments.”