The annual Seaview Pier Dogfish Tournament, in its fifth year, was held on Saturday, February 20, and despite frigid air temperatures and a water temp hovering around 56 degrees, the event still attracted 66 anglers that weighed in a total of 36 fish.

The big winner this year was Doug Caster, of Falcon, NC. Just 30 minutes into the event’s fishing time (anglers started at 12:00 noon and fished until 8:00 pm), Caster landed what would be both his and the event’s biggest dogfish of the day. 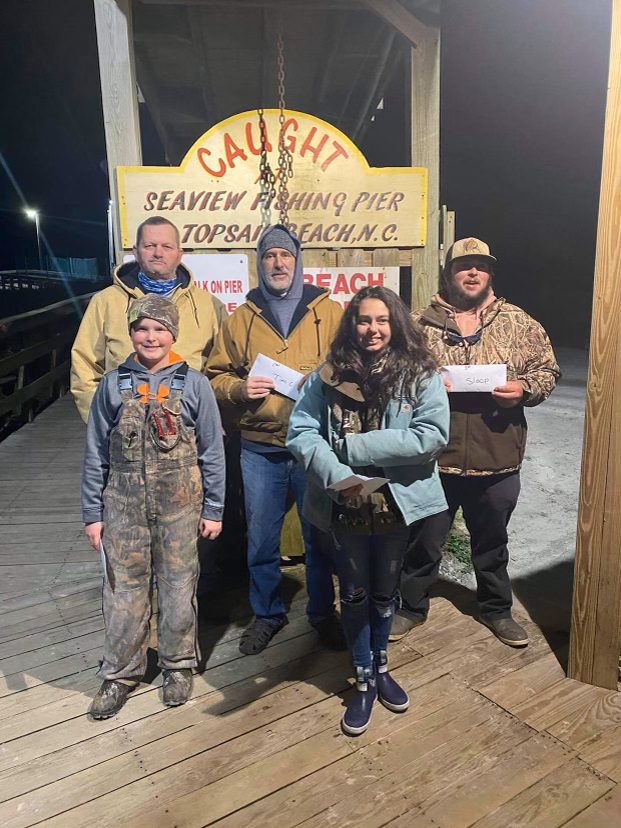 The big winners in the annual Seaview Pier Dogfish Tournament include Doug Caster, Tim Chavez, Josh Sloop, Adam Fisher, and Ryleigh Yates. The top dogfish was 10.1 lbs. and was weighed in by Doug Caster.

He was fishing off the end of the pier and heaved a piece of squid out about 80 yards. The 10.1 lb. dogfish was also Caster’s first fish of the day, and he went on to land a total of five dogfish before the fishing time ended.

This was Caster’s second year fishing the event. Last year he failed to weigh in.

Second place in the event went to Tim Chavez, from Sneads Ferry. His 10.0 lb. dogfish was caught a little after dark on a piece of cut squid. Chavez has fished 3 of the 5 Seaview Pier dogfish tournaments, and he was the winner of the first event Seaview Pier hosted.

Chavez landed a total of three dogfish over the course of the day.

Third place went to Josh Sloop with a 9.9 lb. dogfish.

The two junior angler champions were Ryleigh Yates with a 9.4 lb. dogfish and Adam Fisher with an 8.0 lb. dogfish.

When the event started at noon, there was a slight outgoing tide, and the action was steady with about one dogfish caught every 30 minutes or so. Then at dusk the bite picked up.

More information on the event can be found at Seaview Pier’s Facebook page at www.facebook.com/SeaViewFishingPier.