A total of 35 teams signed up to fish this year’s event, a tournament where boats could choose Saturday or Sunday to fish for their heaviest three spanish mackerel to weigh in. In addition to the leaderboard, boats could also enter the Single Big TWT, Three Spanish TWT, and Bluefish TWT.

However, one of the more popular features of the event is the numerous youth angler prizes. There are cash prizes for the heaviest spanish weighed in by junior (ages 0-8), pre-teen (ages 9-12), and teen (ages 13-17) anglers, and then every youth angler from all three divisions that weighs in a fish is awarded an SMO medal and SMO prize pack.

This year’s champion was Team Blood, Sweat, and Beers, comprised of Zach Wait, Nick Ellington, and Zack Kennedy, who are all friends that work together at Atlantic Marine.

Blood, Sweat, and Beers finished atop the leaderboard in the 2021 Spanish Mackerel Open. Their three-fish aggregate of 5.30 lbs. was anchored with this tournament-best 3.56 lb. spanish caught on a live pogey in 50′ of water.

They got off to a good start on Saturday, coming across a school of pogies around 6:00 am, so with about 40 baits in the livewell, they headed out to a spot they had marked prior in the season. The spot sits about three miles out of Masonboro Inlet in 45’ of water, and they arrived in time to rig and prep all their lines prior to the official 6:30 am start.

“By 6:45 we hooked our big fish,” Wait recalled. “I remember because of the time stamp on my phone when I started to record.”

Their big fish was also the tournament’s single heaviest fish, weighing in at 3.56 lbs.

The spot went cold after that first big spanish, so they headed back in to troll from pier to pier in 30’ of water.

They caught about a dozen spanish off the beach, trolling Clarkspoons behind planers, but none they hooked had any real size, each weighing in at less than one pound.

At noon they headed back out to deeper water to try live baits again, and though they saw fish jumping and tried both trolling and casting, they couldn’t generate another bite. The team weighed in around 1:20 with a three-fish aggregate weight of 5.30 lbs. 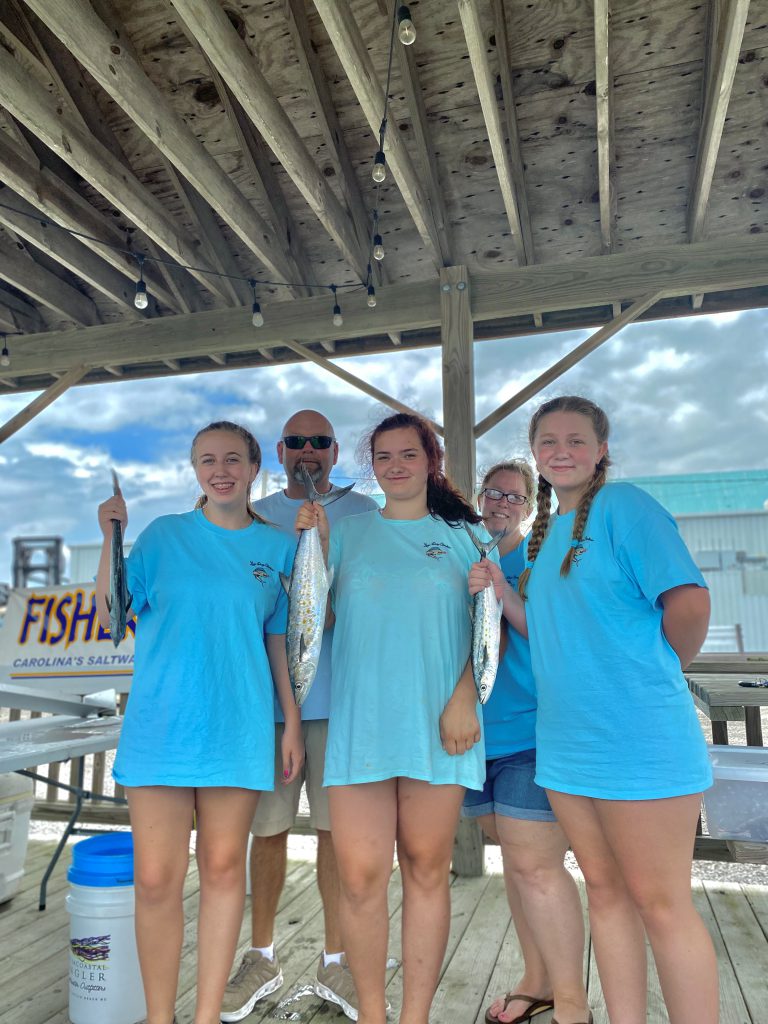 Team Leverdrag took second place in the 2021 Spanish Mackerel Open with a three-fish aggregate of 4.56 lbs. They caught all of their spanish trolling Clarkspoons behind planers.

All of their spanish came from trolling #00 Clarkspoons behind #1 planers—a three-line spread trolled at 5.5 knots—and the best action they found out of Masonboro Inlet was in the vicinity of the “shrimping grounds.”

They caught spanish all day long, donating over 30 spanish to the tournament (the SMO donates most of the spanish weighed in to First Fruit Ministries to help their mission of feeding those in need).

Ashlynn, Alyssa, and Elizabeth took the Teen Angler prize, and Annie was the top Lady Angler.

For a more complete leaderboard, you can visit www.FishermansPost.com, click on Tournaments, and then click on Spanish Mackerel Open. The event takes place every June, with Registration and Awards at Wild Wing Cafe and the Weigh-In at Motts Channel Seafood.