The weather forecast for the 2021 Topsail Fall Surf & Pier Fishing Challenge couldn’t have been more daunting—high winds, cold temperatures, and king tides—still, over 100 surf anglers and nearly 50 pier anglers gathered for a weekend where 8 oz. of lead wasn’t enough to hold bottom.

The Topsail Fall Surf & Pier Fishing Challenge offers two separate divisions, with pier anglers only competing against other pier anglers and surf anglers only competing against other surf anglers. Each division took the beach and planks for 36 hours of round-the-clock fishing in search of the heaviest bluefish, red drum, trout, black drum, and sea mullet, with Friday’s Registration and Sunday’s Dinner and Awards held under the big tents in the parking lot of East Coast Sports. 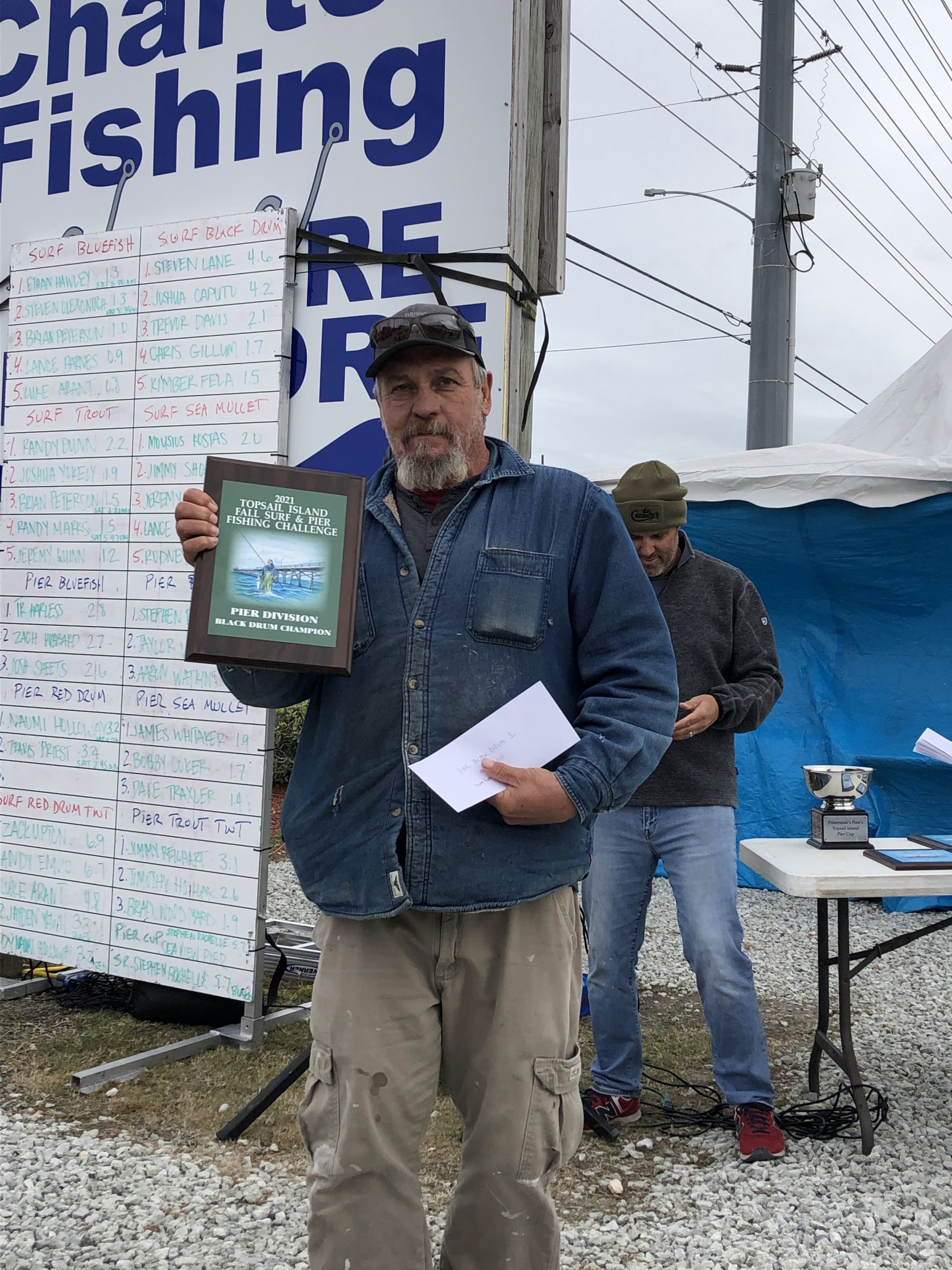 Stephen Rochelle, from Jacksonville, NC, took the win in the Pier Black Drum Division with a 5.7 lb. fish caught on a piece of fresh shrimp while fishing from Seaview Pier. Rochelle also won the Pier Cup for Seaview Pier.

In the Pier Division, TR Harless, from Millers Creek, NC, landed the heaviest bluefish. His 2.8 lb. blue was landed around 9:00 on Saturday morning while he was fishing from Jolly Roger Pier. The blue hit a live finger mullet on the bottom in the breakers. Harless had hooked a bigger bluefish earlier in the day, but the winds kept him from being able to net the bigger blue.

The heaviest slot red drum weighed in from a pier angler was a 3.2 lb. redfish (approximately 19.5”) landed by Naomi Holloway, from Fayetteville, fishing from Jolly Roger Pier. She landed the redfish almost immediately after the official lines in the water at 11:59 pm on Friday. The red hit a piece of fresh shrimp (purchased from One Stop Bait & Tackle) on a two-hook rig soaking just beyond the breakers.

The heaviest fish of the entire tournament was the 5.7 lb. black drum landed from Seaview Pier by Stephen Rochelle, of Soggy Bottom Bait & Tackle in Jacksonville, at about 1:30 on Saturday afternoon. The black drum hit a piece of fresh shrimp (caught earlier that day) on a black drum rig, a two-hook rig where the bottom hook is right on top of the sinker with a longer leader so that it lays flat on the sand.

The 5.7 lb. black drum also earned Stephen Rochelle and Seaview Pier the Pier Cup. The winning angler gets his/her name, the fish and fish’s weight, and the name of the pier engraved on the Pier Cup, and then the Pier Cup resides at that winning pier until it must be defended at the next Topsail Surf & Pier event (one in spring and one in fall).

The Pier Division offers a voluntary Trout TWT, and the winner this fall was Jimmy Reichart, of Kernersville, NC. He landed a 3.1 speckled trout (both gray and speckled trout count) early on Saturday morning. Reichart was fishing from Jolly Roger Pier and hooked the trout out towards the end of the pier throwing a Gotcha plug.

Reichart was targeting a school of bluefish. He had a blue swipe at and miss his orange and white Gotcha plug, and then his rod suddenly bent double when the trout hanging out underneath the blues got hooked in the belly with the Gotcha plug.

In the Surf Division, Ethan Hawley, from Nahunta, NC, found the heaviest bluefish from the sand. He landed a 1.3 lb. blue from the Surf City beachfront on an incoming tide. The blue fell for cut spot on a drum rig. 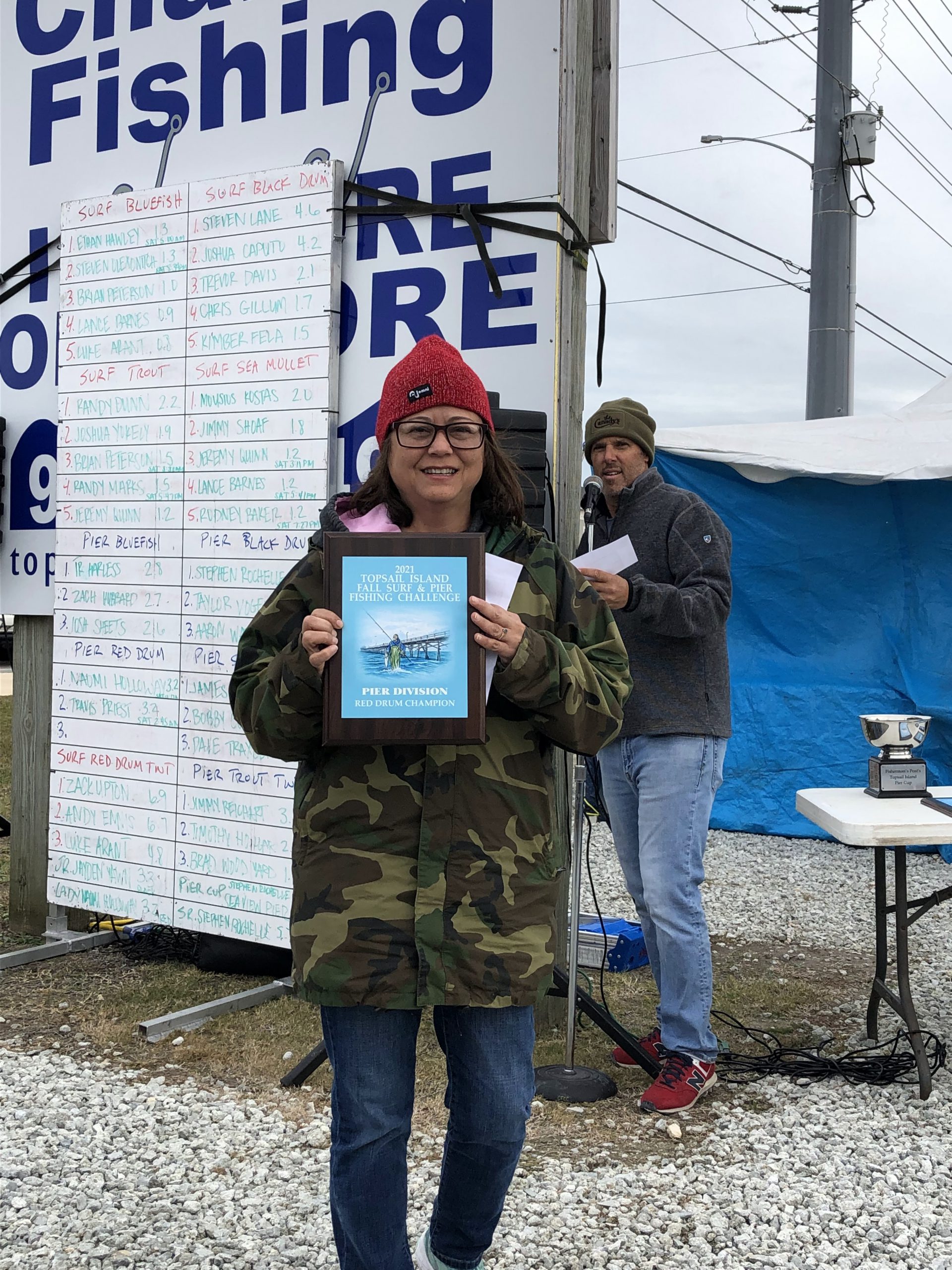 Naomi Holloway, from Fayetteville, landed the heaviest red drum from a pier in the Topsail Fall Surf & Pier Challenge. Her 3.2 lb. redfish hit a piece of fresh shrimp that she was soaking from Jolly Roger Pier.

Surf anglers landed more trout in the 2021 fall event than any other year, and it was Randy Dunn, from Asheboro, NC, that finished with the heaviest trout from the beach. His 2.2 lb. speckled trout was caught on cut mullet on a fish finder rig. Dunn was north of Surf City Pier and was unsuccessfully holding bottom until the tide changed around 3:00 in the afternoon on Saturday. With the slack tide, he was finally able to hold bottom, and then it took about 10 minutes to get that trout bite.

In the Surf Sea Mullet category, Kostas Mousios, originally from Greece and now from Lancaster, SC, weighed in a 2.0 lb. sea mullet to best the other sea mullets. His fish came from some deeper water in the general area of Surf City Pier, and it hit a live shrimp on a two-hook rig at about 3:00 am on Saturday morning.

Steven Lane, from Princeton, WV, took the top spot in the Surf Black Drum category. His 4.6 lb. black drum hit a piece of cut mullet on a two-hook rig while he was fishing north of Seaview Pier. The fish hit about one hour after the official lines in the water. He didn’t even know he had a fish on when he checked his line, as he had been dealing with a shark bite-off prior. So, when he went to check his second line, he realized that the black drum had already washed up on the bank with his hook in its mouth. 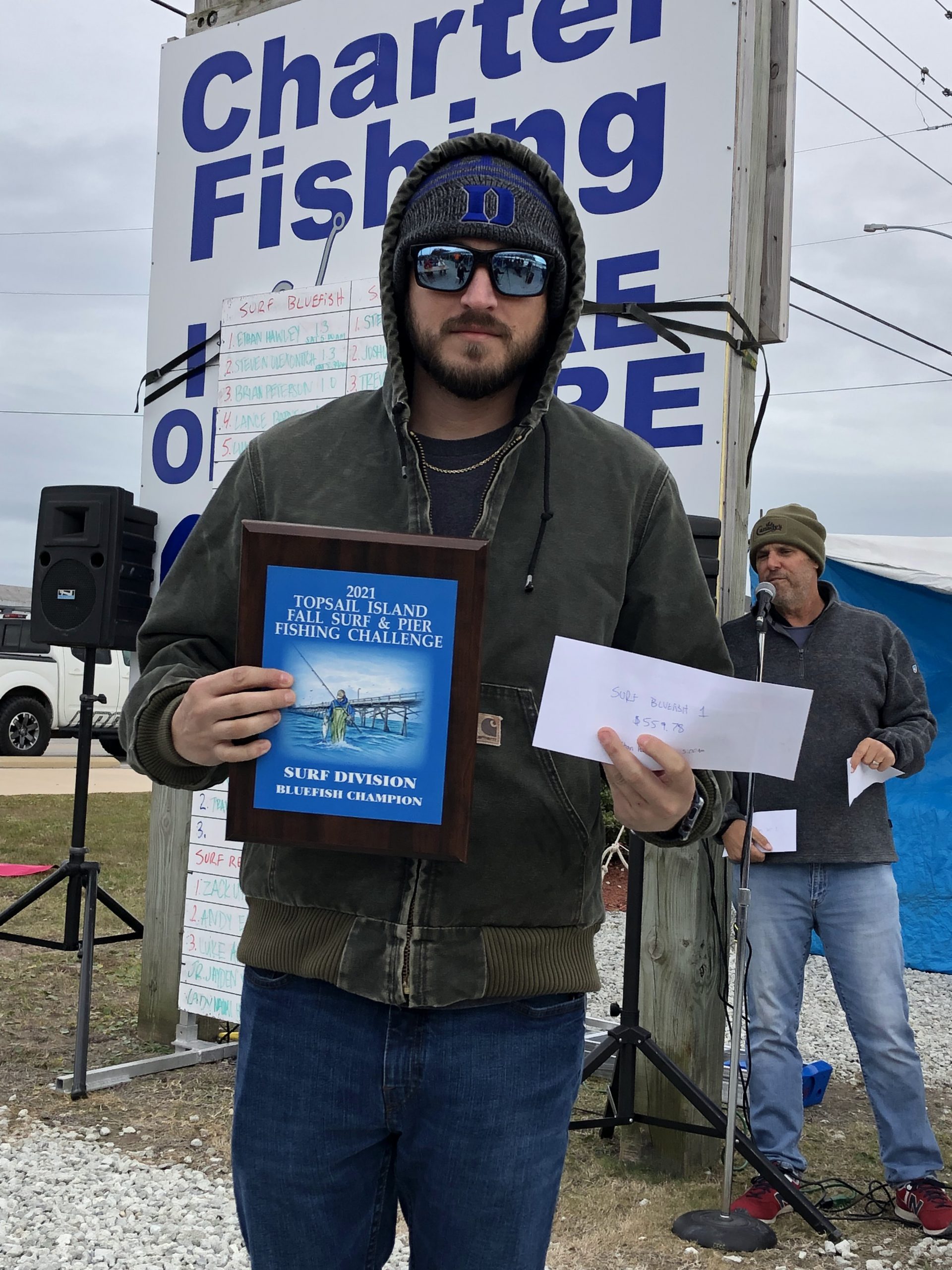 Ethan Hawley, from Nahunta, NC, won the Surf Bluefish Division with a 1.3 lb. blue that bit a piece of cut spot on a drum rig on the beach near Surf City Pier.

Surf anglers are offered a voluntary Red Drum TWT, which is typically the biggest payout of the entire weekend. That big payout this year went to Zack Upton, from Dunn, NC.

Upton was fishing the south end of the island and was targeting a cut that runs through a sandbar. The conditions were so tough that he was re-casting about every four minutes, throwing his bait (cut bluefish on a fish finder rig) out to the left and letting it wash down the cut, since his 8 oz. sputnik sinker wasn’t coming close to holding bottom, and this was during the dead low slack tide.

All the fish weighed in during the Topsail Fall Surf & Pier Fishing Challenge are donated to First Fruit Ministries, a local non-profit that serves over 20,000 hot meals, provides emergency groceries to over 5,000 households, and shelters over 24 homeless women and families annually.

The Awards Dinner, compliments of East Coast Sports, is catered by the local Boy Scout Troop, and this dinner happens just prior to awards and a raffle.

The next Topsail event is the 2022 Topsail Spring Surf & Pier Fishing Challenge scheduled for April 29-May 1, and the dates of next year’s fall event are November 4-6, 2022.

A more complete leaderboard of results, as well as additional information on all of Fisherman’s Post surf fishing events, can be found at www.FishermansPost.com.