The 2021 Topsail Inshore Challenge, held the weekend of June 25-26, is an event with a two red drum leaderboard. After a Registration on Friday hosted by East Coast Sports, anglers hit the inshore waters on Saturday morning (lines in at 6:00 am) looking for their two heaviest slot red drum to bring to the scales at Sloop Point Boat Storage in Hampstead.

This year’s champion was Kyle Peters and Trey Cain, of Team Killin’ Time, weighing in a tournament best 14.58 lbs. and beating the closest competitor by more than a pound. 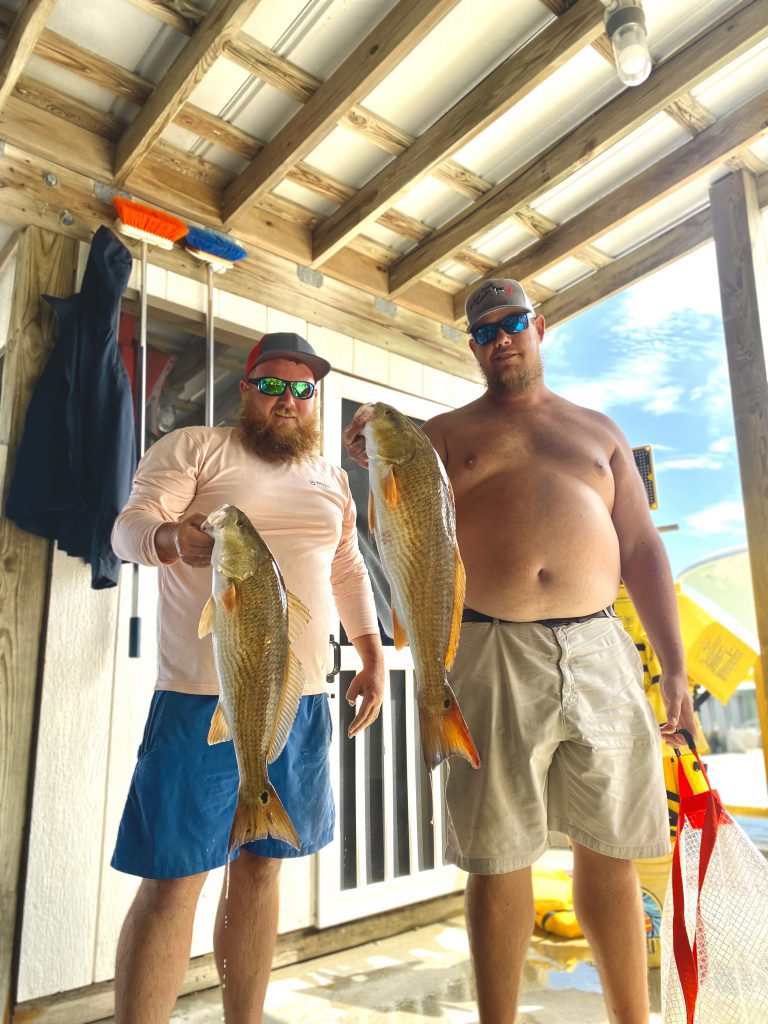 Trey Cain (left) and Kyle Peters, of Team Killin’ Time, took the top spot in the 2021 Topsail Inshore Challenge with a two red drum aggregate of 14.58 lbs. The reds were caught in the Southport area on live pogies.

Peters and Cain started their day catching bait in the Carolina Beach area, easily finding the 4” pogies they were hoping for. Then they headed to the Southport area but found that the tide was a little too low to get to where they had planned. To pass the time, they did some flounder fishing, and while they found a few flounder and a couple of 16-17” red drum, around 8:00 they got a more significant pull down.

The fish went on a run, headed under a dock, and got wrapped. It took about 10 careful minutes to get the red drum out, and once in the boat it measured out at just under 27” and was their heavier fish at 7.94 lbs.

“He was close,” Peters recalled. “He got measured a few times throughout the day.”

The tide continued to come in, and so they targeted an area where they had found red drum two weeks prior. They didn’t hook any at that spot, but in the vicinity, they found a quick red drum bite, landing three fish all at 25.5”. The second of the three reds was the heaviest from the small pod, and that fish weighed in at 6.64 lbs.

Peters and Cain pulled lines at 2:00 and made Sloop Point Boat Storage at 3:40.

Second place in the event went to Kaleb Frink and Joey Brockelbank, of Team Touch of Grey, with a two-fish aggregate of 13.54 lbs. 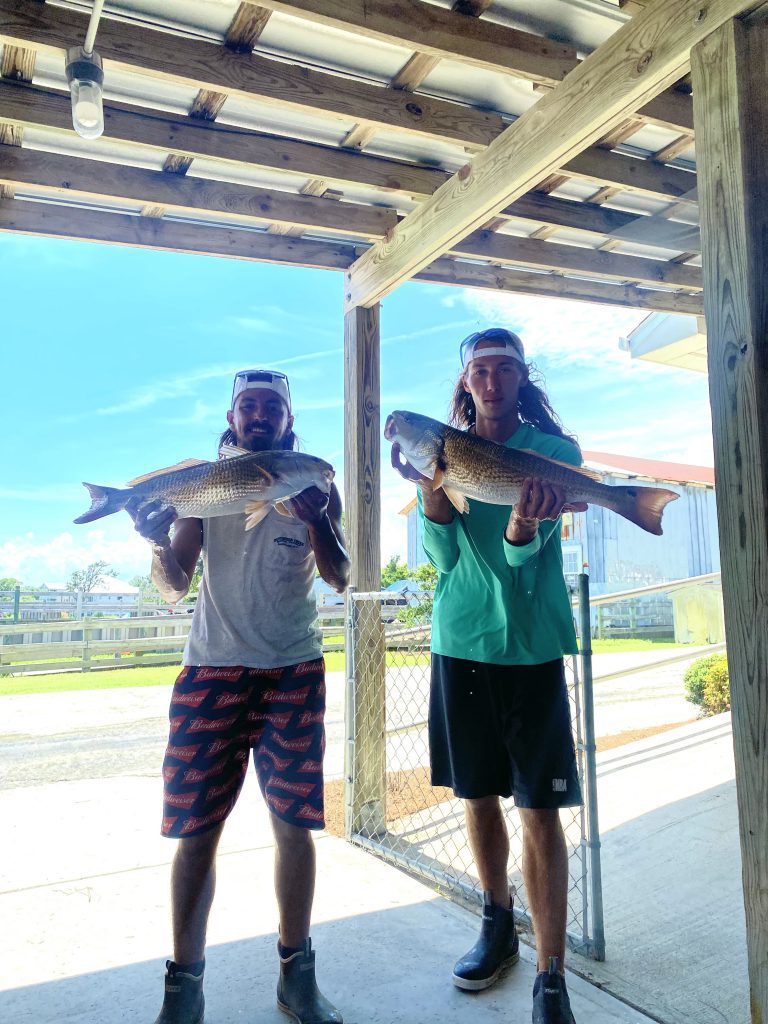 Joey Brockelbank (left) and Kaleb Frink, of Team Touch of Grey, came in second place in the 2021 Topsail Inshore Challenge with two reds totalling 13.54 lbs. Both fish came from under a dock in the Southport area.

Their home waters are Southport, and their plan on tournament day was to fish those home waters. They were armed with live shrimp but stumbled on some schools of pogies in the morning, so they added those to the livewell.

They basically spent all day on one dock. At 6:05 the team pulled the hook on what seemed to be a good fish, and then they didn’t get another bite until 8:00. The 8:00 fish hit a live pogie and ran up under the dock, and Frink and Brockelbank used the trolling motor to change angles on the fish in order to pull him out. This was their bigger fish at 7.25 lbs.

The team tried to find an oyster toad on their run to the scales, stopping at 4-5 spots between Southport and Hampstead, but no oyster toad was found.

A more complete leaderboard with all the top finishers, including the top three Trail finishers, can be found at www.FishermansPost.com.