The 2021 Topsail Surf & Pier Fishing Challenge, held April 30-May 2 with headquarters at East Coast Sports in Surf City, attracted close to 175 anglers this spring to compete in both the Surf and Pier Divisions. The Surf Division was based off the single heaviest fish weighed in in four categories (bluefish, trout, sea mullet, and black drum, with a Red Drum TWT). The Pier Division featured the same competition in bluefish, spanish, sea mullet, and black drum, as well as a Trout TWT.

The winning bluefish from the surf was weighed in Sunday morning by Britt Martin, of Raleigh. His 2.3 lb. blue came from the beachfront out in front of his hotel in Surf City. On Saturday night they experienced a “croaker invasion,” to the point where they had to stop throwing out bait because everything got chewed up by the croakers. Then in the early morning on Sunday, with the last bit of bait left, he hooked his bluefish on a 6” spot on a double-dropper rig.

Kobe Windsor (age 12), from Hickory, NC, landed the event’s biggest fish of the weekend, an 8.8 lb. black drum pulled from the surf about 200 yards from Jolly Roger Pier. Kobe had just turned 12, and he was fishing the tournament as part of his birthday celebration.

The black drum came from throwing fresh shrimp (they couldn’t find any sand fleas) on a two-hook rig into a good hole early on Saturday morning. Kobe took his time landing the fish, employing loose drag and patience when approaching the wash, but after a 10-15 minute battle, the fish was safely on the sand.

The heaviest sea mullet from the surf came from Corey Gibson, of Norwood, NC. His 2.1 lb. sea mullet was landed Saturday morning in the area of Jolly Roger Pier. He was out of sand fleas, so he squirted Pro-Cure into an empty sand flea shell. However, he attributes his win to a new Tsunami Airwaves rod he bought that weekend at East Coast Sports. The sensitivity of the new rod, he believes, was the only reason he was able to feel the light bite of the sea mullets that weekend.

In the Trout category, Blair Wiggins, of Wake Forest, took the top spot with a 2.3 lb. trout. Wiggins landed the trout on the south end bouncing a jig head tipped with shrimp at night.

The biggest payout of the weekend was for the Red Drum Surf TWT, and that prize money went to Matt Dyson, from Hickory. His 6.6 lb. redfish came Saturday morning from a two-hook rig baited with fresh shrimp in the waters near Jolly Roger Pier. Dyson graciously donated his near $1000 prize check to the Surf City Boy Scouts. 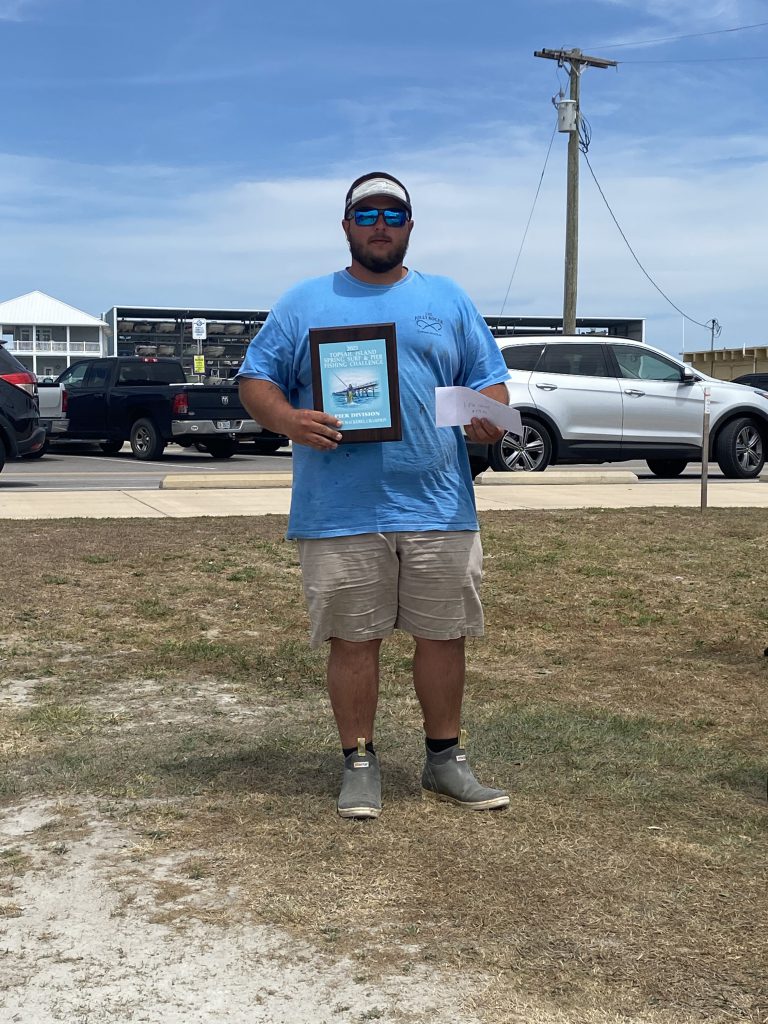 Josh Sloop, of Surf City, took first place in the Pier Spanish category of the Topsail Spring Surf & Pier Challenge with a 2.6 lb. spanish mackerel landed on a Gotcha plug while fishing from Jolly Roger Pier.

The Pier Division’s top bluefish was a 1.4 lb. blue weighed in by Dustin Ream, of Benson, NC. He was fishing from Jolly Roger Pier when the bluefish bit about 30 minutes after a big school of spanish had pushed by the pier. His bluefish hit a red head Gotcha plug around 5:00 on Saturday afternoon.

The event’s heaviest spanish landed off a pier went to Josh Sloop, of Surf City. He caught the 2.6 lb. spanish around 8:30 on Sunday morning fishing Jolly Roger Pier with a Gotcha plug. The pier experienced a great spanish run over the weekend, with Sloop hooking 78 spanish in an 8-hour window. He landed several 1.9 lb. spanish, which held the lead for most of the weekend, and then he upgraded Sunday to the 2.6 lb. fish.

The heaviest sea mullet brought in by a pier angler went to Bobby Coker, of Kenly, NC. His 1.6 lb. fish came from Jolly Roger Pier on Saturday morning. It hit a piece of cut shrimp on a two-hook rig.

Todd Butler, from Leland, took the top spot in the Pier Black Drum competition. He reeled in a 2.6 lb. black drum from Jolly Roger Pier around 10:30 on Saturday night. The fish hit a piece of fresh shrimp on a two-hook rig and also earned Butler and Jolly Roger Pier the Pier Cup title, an ongoing award for the heaviest fish landed by a pier angler over the weekend (Butler edged out Sloop based on time). The Pier Cup will reside at Jolly Roger Pier until the fall event when the Cup must be defended again.

In the Pier Trout TWT, the heaviest fish was a 1.0 lb. speck caught Saturday night at high tide by Steve Rochelle, of Jacksonville. The trout hit fresh shrimp on a Carolina rig while Rochelle was fishing from Seaview Pier.

A more complete leaderboard, including all winners and their winning fish, can be found at www.FishermansPost.com. The website also has information on the Topsail Fall Surf & Pier Fishing Challenge (November 5-7), as well as the Hatteras Surf and the Pleasure Island Surf events.