The record-setting 43rd Annual U.S. Open King Mackerel Tournament was held Oct. 1-2 at Dutchman Creek Park. It attracted the highest number of participants in the tournament’s history with 561 boats from more than nine states and awarded more than $400,000 in cash prizes.

With their single-engine vessel, “Bare Necessities” and Capt. Cameron Yow and his crew, Mitchell Pigg and Bradley Flowe of Kannapolis, NC, took first place in the tournament with a 45.00 lb. king mackerel. They won a total of $58,830 for their efforts. 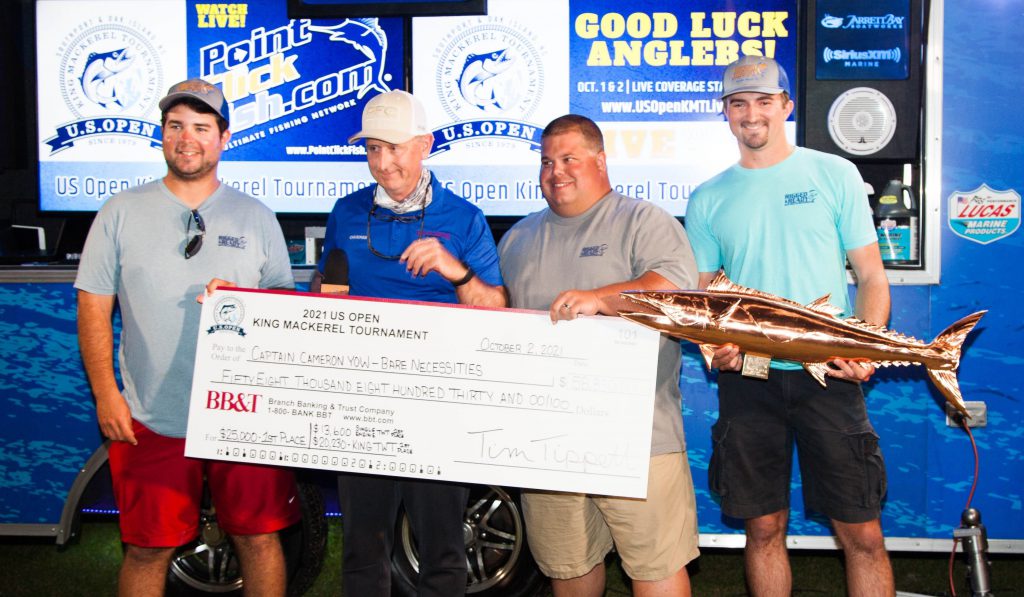 “It’s anybody’s game out there,” said Yow when he accepted the prize. “You can tell by the small boat we were on.”

The second-place team, “Lil Crazy,” led by Capt. Seth Williams of Murrells Inlet, SC, brought in a king mackerel weighing 44.10 lbs., which won them a combined total of $133,913. Their prize was the largest cash prize ever awarded to a single team in the tournament’s history.

“Overall, the tournament was a great success and will go down in the record books as the biggest one we’ve had to date in terms of participants and prizes,” said Karen Sphar, executive vice president of the Southport Oak Island Area Chamber of Commerce. “We appreciate everyone who participated in the tournament, from the anglers who fished it, to the sponsors, vendors and volunteers who helped make it happen, and of course our tournament planning committee and Board of Directors, led by Tim Tippett.”

This was the second time the tournament was held at Dutchman Creek Park. Tournament officials worked with Brunswick County Parks & Recreation officials to secure permits to allow temporary dockage at the park. American Marine Construction provided the barge for offloading, Rusty Hooks Dockside Grill provided a location for anglers to re-board their boats after weighing in, and the Brunswick County Sheriff’s Office provided traffic control on the water.

The U.S. Open King Mackerel Tournament is one of the largest king mackerel tournaments on the East Coast and has a $2 million economic impact on the region. It is held annually the first week of October and is an event of the Southport Oak Island Area Chamber of Commerce.