The Wrightsville Beach Inshore Challenge is one of the longest standing tournament’s that Fisherman’s Post hosts, and this year once again saw a great crowd gather for a weekend (July 23-24) of big fish, great food, refreshing drinks, and strong camaraderie, with the festivities onsite at Wild Wing Cafe and the weigh-in at Wrightsville Beach Marina.

The top finisher on the leaderboard and in the payouts was Team Parker, comprised of brothers Sam and Mark Daughtry. The team walked away with over $3000 in prize money but felt like they earned every dollar of it after battling northeast winds at 20 knots all day. 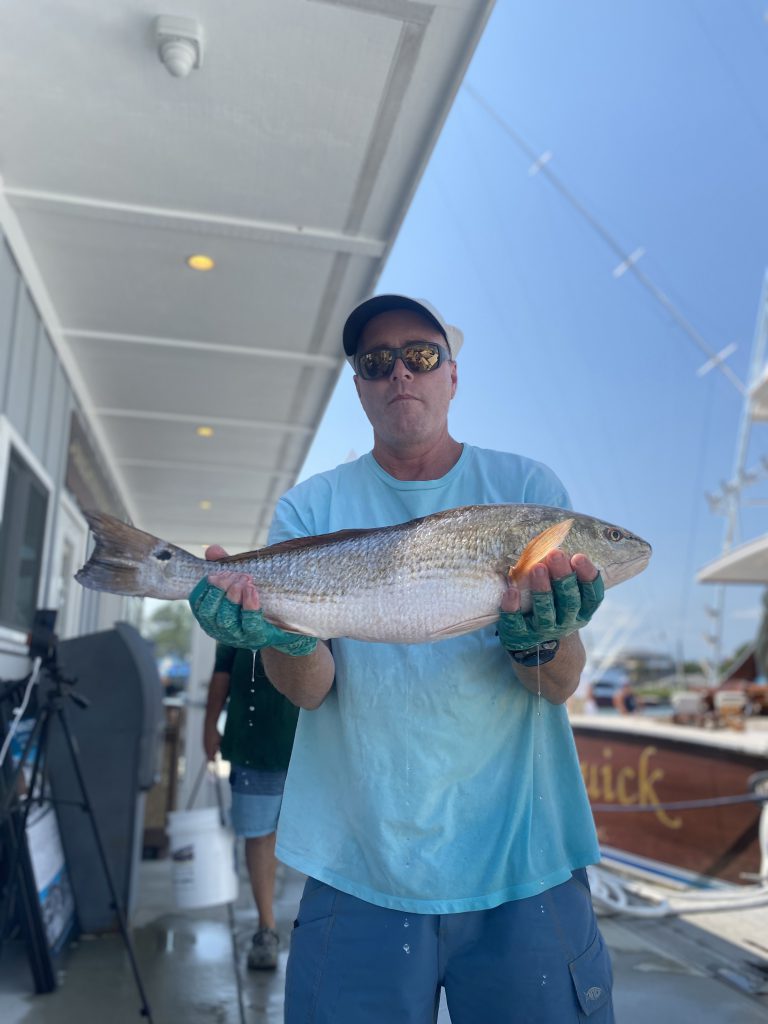 Sam (pictured) and Mark Daughtry, of Team Parker, took home over $3000 in prize money in the Wrightsville Beach Inshore Challenge with this 5.57 lb. red drum caught off the beach using live bait.

Though the wind was a struggle for the teammates that fished nearshore waters in search of two heavy in-slot red drum, the weather also helped the team out. They ran out of battery on their spot lock around 1:45 pm as the trolling motor had trouble keeping up with the conditions, but the rough seas also helped them out as they spent most of the fishing day without any other boats around.

“We went through about 60 rigs,” Sam Daughtry recalled about their time moving around from wrecks to ledges.

The bite was steady all day for the duo, with an average of one bite every 10 minutes or so. All of the reds they caught, except for three, were over-slot, with the biggest measuring 33”. They also caught several flounder and gray trout.

“One of our fish measured 1/18-inch over on one side and 27-inches exactly on the other,” said S. Daughtry. “He was a heavy fish, too, probably 8-pounds, but ultimately we decided to throw him back.”

The only other two in-slot reds they caught were the two fish they weighed in, with one totaling 7.57 lbs. (the leaderboard winner and the winner of the Single Big Red Drum TWT), and the other weighing in at 6.56 lbs. (the fish that also brought the team the top spot in the Two Red Drum TWT).

Finishing in second place was Reel Outcast, made up of Hutch Strickland, Wendy Moore, Blake Leigh, and David Tollison, weighing in a 7.44 lb. red drum.

“We had a good morning,” Hutch Strickland stated. “It was an early bite, and we had four over-slot reds pretty quickly.”

Their second fish of the day, though, measured out at exactly 27”. At weigh-in it measured 26.75” and held on to the second place slot. 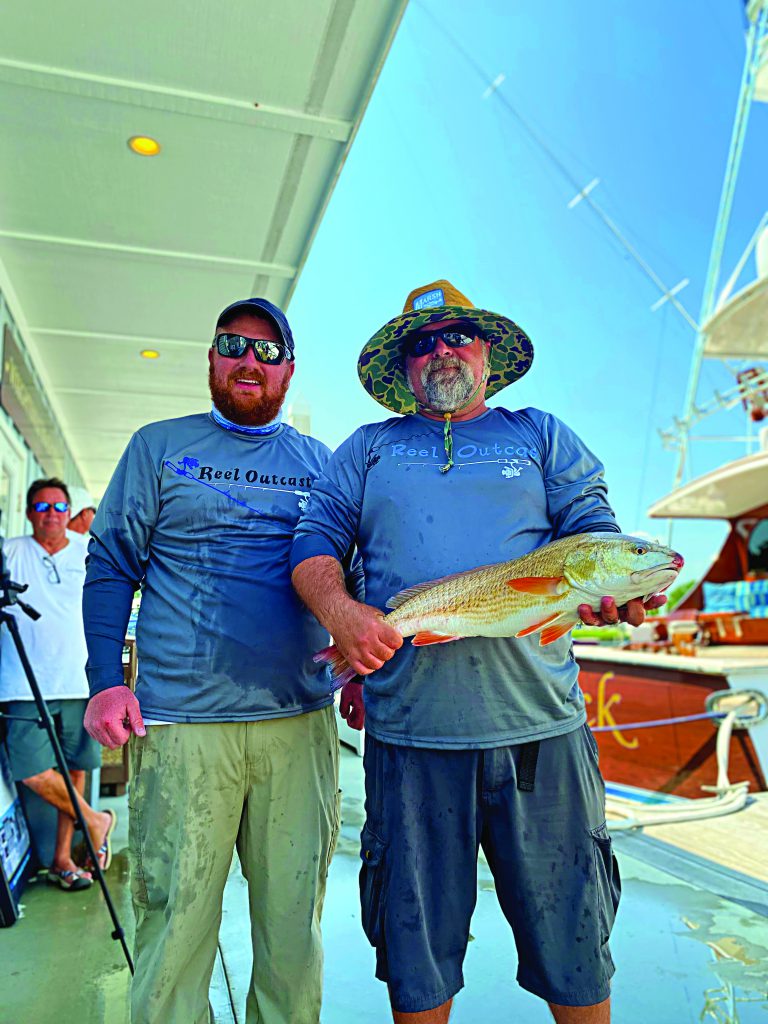 Blake Leigh and Hutch Strickland, of Team Reel Outcast (not pictured are Wendy Moore and David Tollison), with the 7.44 lb. red drum that finished in second place in the Wrightsville Beach Inshore Challenge. They found the fish targeting docks and using live menhaden.

The team was fishing docks in the Wrightsville Beach area and using live menhaden. When the morning bite stopped, the team continued to try docks, creeks, and channels all the way to nearly Southport, but they never found a second in-slot red drum.

Perhaps the most impressive finish of the event, though, should go to Evan Jacobs of Team 7th Evan Fishing, who finished in third place, made impressive by his choice of boat. Jacobs fished the event in his pedal drive, 12’ Hobie kayak.

He launched near the south end of Wrightsville Beach, and after scouting some area creeks and not finding what he was looking for, headed out to Masonboro Inlet. There he worked the rocks on the inside of the jetty, using a bottom sweeper jig and mud crabs (that he had caught the day before).

His upper-slot red drum, that measured 27” on his folding measuring stick and then weighed in on tournament scales at 7.12 lbs., came soon after arriving at the jetty.

Jacobs stopped fishing the rocks around noon, and with the tide falling hard, it took him about an hour just to get out of the inlet, where he took a short rest on the south end of Wrightsville Beach. Once catching his breath, it took him another 1.5 hours to make his way through all the boat traffic and current to Wrightsville Beach Marina. 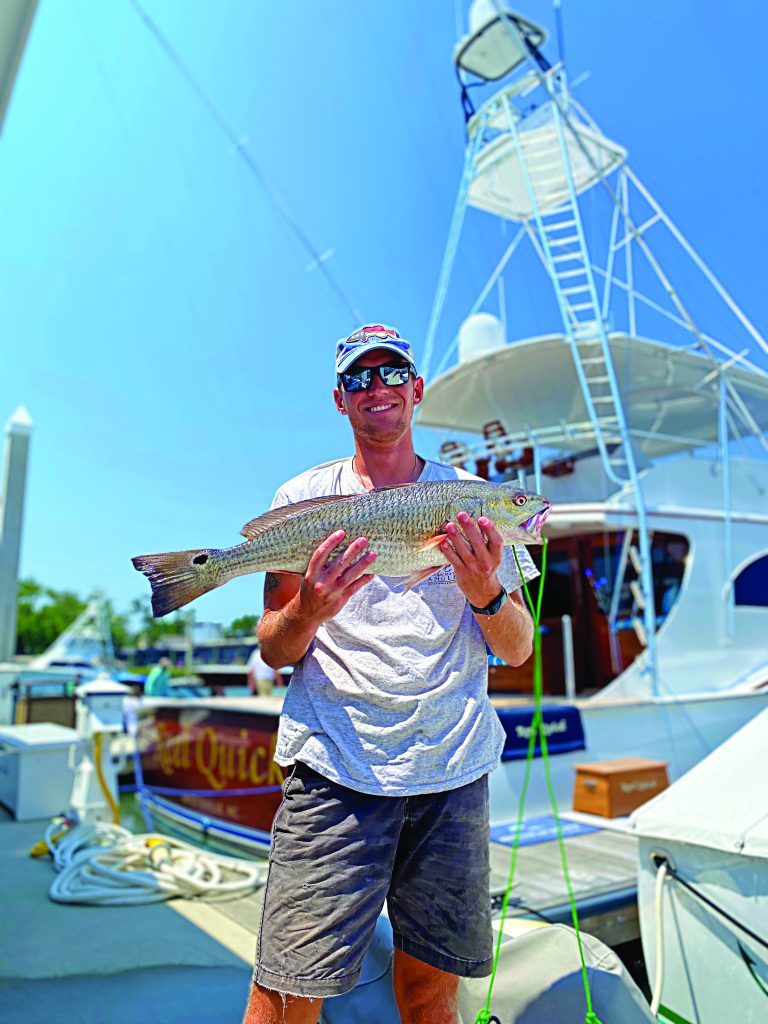 Evan Jacobs holds up the third place red drum (7.12 lbs.) in the Wrightsville Beach Inshore Challenge. He fished the event from his pedal-drive, 12′ Hobie kayak and landed the redfish on the Wrightsville jetties.

“I donated all my prize money to my friend Hannah to help with her cancer treatment,” Jacobs added. “It’s a small way to help out.”